Outflanked again: Will Democrats find a way to lose big on DACA?

Trump offers an atrocious deal, and Democrats take a shutdown off the table: Hardliners win without a fight 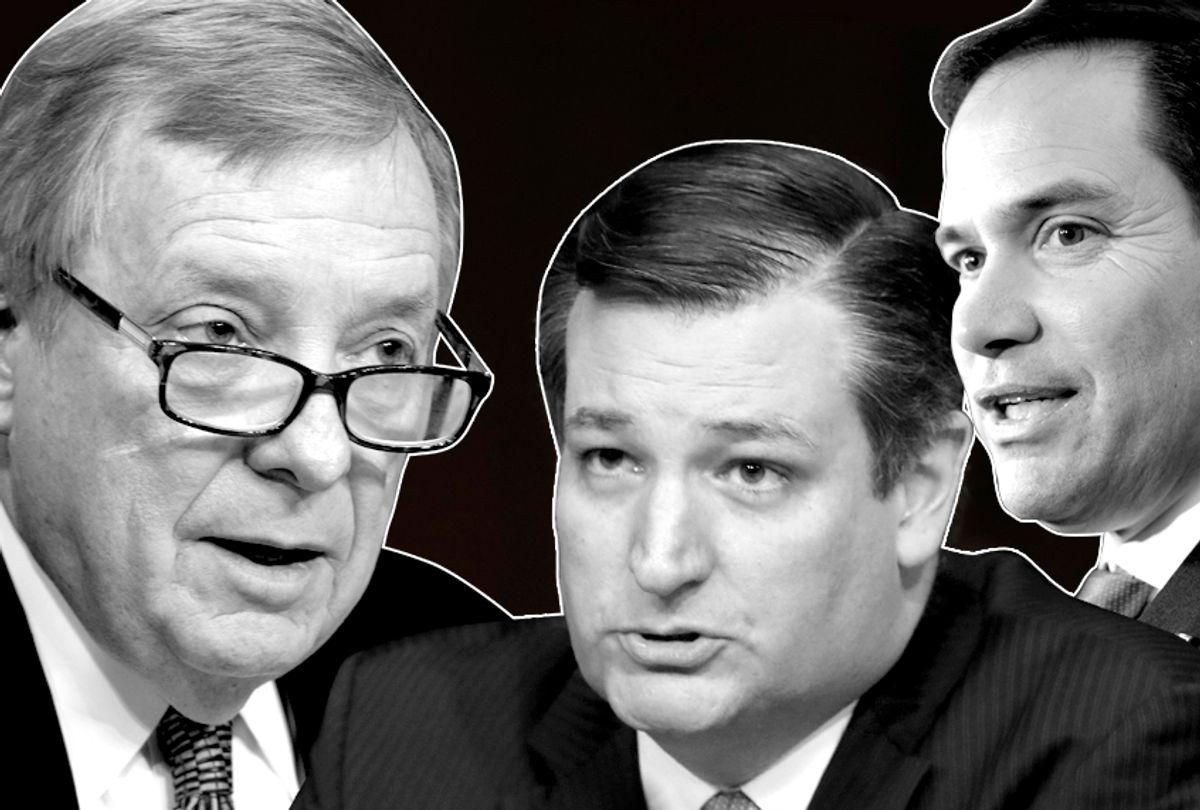 The White House offered up its most hardline immigration adviser to roll out the president’s proposed “fix” to immigration and the Deferred Action for Childhood Arrivals (DACA) program late on Thursday.

Stephen Miller attempted to sell the plan, which the White House said will be released in full on Monday, as “a compromise position that we believe will get 60 votes in the Senate.” In reality, it would represent the biggest cut to legal immigration into the United States since the racial quota laws of the 1920s. CNN reporters Tal Kopan and Jeremy Diamond outlined the White House’s framework this way:

... Trump would accept a path to citizenship not just for the roughly 700,000 undocumented immigrants [who] were covered by the Deferred Action for Childhood Arrivals program when it was ended. But the proposal would also cover those undocumented immigrants who meet the DACA criteria but did not sign up and even more who would be newly eligible under the proposal's timeframe requirements -- giving legal status and a pathway to citizenship to about 1.8 million people.

In return, the White House would like to see a $25 billion investment in a trust for border infrastructure and technology, as well as more funds for personnel, and an end to family migration beyond spouses and minor children. The diversity visa lottery would also be abolished, though the visas would be reallocated so that the backlog of people already waiting for family visas and high-skilled immigration green cards would be processed.

An initial analysis from the immigration advocacy group FWD.us suggests that Trump’s plan would result in a 50 percent cut in legal immigration.

"This bill is right down the center in terms of public opinion," a senior White House official told reporters on Thursday. But the administration has now flatly rejected a bipartisan deal proposed by Sen. Lindsey Graham, R-S.C., and Sen. Dick Durbin, D-Ill. If the Miller plan doesn't work, an unnamed White House official told CNN, DACA recipients will become "illegal immigrants and if they fall into the hands of ICE ... [that] ultimately could lead to their deportation."

So the White House is playing hardball. Democrats would be wise to learn the game.

While Trump has garnered headlines about protecting millions of Dreamers and a round of obedient applause from Republican leadership in Congress, including Graham, the president's proposal is riddled with poison pills that guarantee Democrats will reject it, a move that will then undoubtedly be cast by Republicans as extreme.

Instead of fighting back hard, however, Democrats have already given up their most critical piece of leverage: the threat of a government shutdown.

“We’re viewing [immigration and spending] on separate terms because they are on separate paths,” Durbin, the Senate minority whip, revealed on Tuesday. Sen. Patty Murray, D-Wash., added that Democrats’ “goal” is to get a budget deal done by Feb. 8, with a promise to move on to immigration next.

“And then the deal is that if DACA is not part of that" budget agreement, "then it will be the next thing considered,” Murray told Politico.

Essentially, the fate of the Dreamers is now riding on the idea that Trump and the Republicans can be trusted to keep a promise, and that they will be too ashamed to permit mass deportations. In the meantime, thousands of DACA recipients lose their protected status every day ahead of the March 5 deadline imposed by Trump. (A judge has ordered the Trump administration to resume accepting DACA applications until the matter is settled.) Senate Republicans, including one-time immigration moderates Marco Rubio of Florida and Ted Cruz of Texas, are driving a hard line on the issue.

“I do not believe we should be granting a path to citizenship to anybody here illegally,” Cruz, who could face a tight re-election fight this fall, told Bloomberg on Thursday. “Doing so is inconsistent with the promises we made to the men and women who elected us.”

Democrats are under a two-week time crunch. The momentum they gained from the outrage over Trump’s “shithole” comments helped fuel their last try at brinksmanship, ultimately leading to the shutdown of the federal government last weekend. Largely because of anxiety about public opinion (which thus far appears unwarranted) Senate Democrats retreated after only three days.

Thursday’s explicit provocation from the White House may provide the impetus required to pressure Democrats into taking a stand and sticking with it this time. It's noteworthy that every Senate Democrat seen as a prominent contender for the party’s 2020 nomination -- including Cory Booker, Kirsten Gillibrand, Kamala Harris, Bernie Sanders and Elizabeth Warren -- voted to continue the government shutdown in the name of protecting DACA this week.

As immigration activist Frank Sharry explained, hardline Republicans “want to exploit the desperation of the Dreamers and the desire by Democrats to protect them to enact a far-reaching, radical gutting of our nation’s immigration system.”

There are reportedly at least 30 senators currently working on a bipartisan fix to DACA. Senate Democrats must release their own hardline framework. Trump’s original offer involved was legal status or a pathway to citizenship for Dreamers in exchange for his border wall. Now his supposed solution is dramatically worse, and includes retrograde changes that will result in the lowest levels of legal immigration since 1920.

Democrats must decouple the two. Any significant reduction in immigration is likely to have devastating economic consequences, according to many experts. So-called chain migration is the same family reunification policy under which U.S. immigration has operated for many decades. Democrats must stand up for that tradition against an ethno-nationalist threat. The diversity visa lottery, long ago offered up in negotiations by Democrats, should be defended in the wake of Trump’s revealing “shithole” comments.

“This is a white supremacists' ransom note,” declared immigration advocacy group United We Dream, in a statement late Thursday. It's time for elected Democrats to speak up just as boldly. History will not be kind if they are hoping that the spectacle of televised deportations will save them.