Animal abusers policing themselves? That's exactly what the USDA wants to do 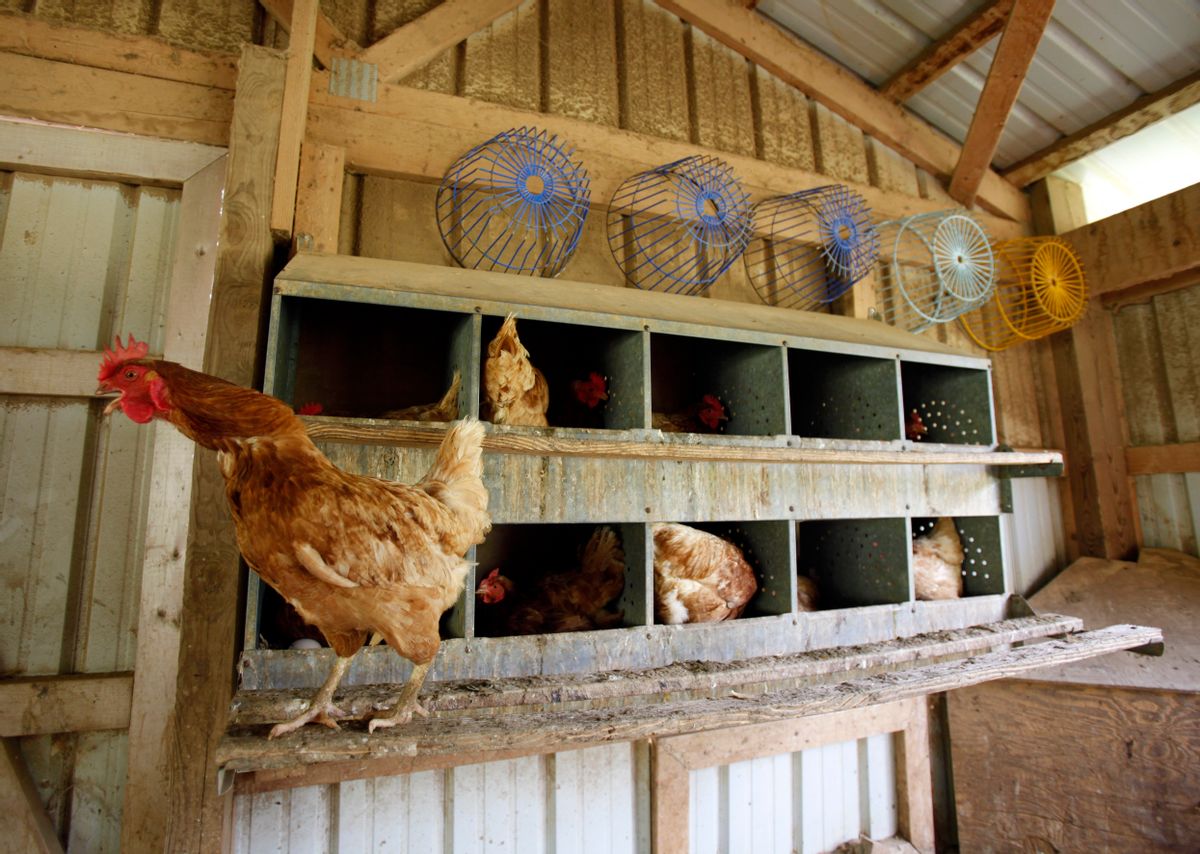 After purging thousands of Animal Welfare Act inspection reports and violation notices that used to be available to the public and were searchable online, the political operatives who took over at the U.S. Department of Agriculture a year ago say they now want to turn over federally funded inspections of puppy mills, roadside zoos, and research labs to the very groups using the animals.

This plan would enrich these parties with your tax dollars and set up a free-for-all when it comes to animal care and well-being in the United States. While we have long criticized the USDA for lax enforcement, we have always valued the independence of those government inspections and worked to make them better and more vigorous and hard-hitting. This proposed retreat from an independent, government-run inspections program is the latest deregulation maneuver by the USDA, which last month proposed eliminating a previously approved USDA plan to strengthen animal welfare standards for farmers operating under the organic animal welfare label.

Since last year’s removal of inspection reports from the USDA website for these regulated facilities, it’s now virtually impossible for the HSUS, the media, or private citizens to learn who the worst animal welfare violators are, or whether the USDA is fulfilling its obligation to enforce the law. Although a small subset of records has been restored, most of the information about violations by puppy mills and roadside zoos is still sorely incomplete and lacking the critical details, with key data and information redacted.

For example, local officials and pet stores have no way of knowing whether they are buying dogs from breeders with recent Animal Welfare Act violations, and it’s more difficult for the public to distinguish responsible breeders from puppy mills. If the agency adopts this latest hand-over of its enforcement programs to the very industries it’s been charged with regulating, it would both shroud and cripple federal animal welfare inspections. It’s the greatest set of self-inflicted wounds to the USDA’s 50-year history of enforcing the Animal Welfare Act, and it marks the latest outrageous maneuvering from the crowd running the USDA during this past year.

The man who led the USDA transition for the Trump administration is Brian Klippenstein, who also ran a super PAC called Protect the Harvest. That PAC, funded by multimillionaire Forrest Lucas, has fought against any and all animal welfare standards, battling on behalf of puppy mills, trophy hunters, horse soring practitioners, pro-horse-slaughter interests, and factory farms. This proposed change in the inspections program comes right out of the playbook of Protect the Harvest.

In 1966, the U.S. Congress charged the USDA with enforcing the Animal Welfare Act, including conducting inspections to ensure compliance by licensees and registered facilities. That’s the way the system has operated for more than 50 years — indeed, this federal law requires regulated entities to allow APHIS officials access to inspect their properties.

The answer to lax USDA enforcement and weak laws is to strengthen those efforts, not to outsource oversight and enforcement to industry. In 2017, a bipartisan group of more than 220 U.S. Senators and Representatives sent letters to key appropriations committee leaders, urging vigorous funding for enforcement, restoration of the purged inspection documents, and a crackdown on rampant abuses by violators of the Animal Welfare Act.

The USDA’s past experience with delegating its animal welfare responsibilities to private inspection entities has been widely recognized as an unmitigated failure. Decades ago, the USDA set up an industry-run enforcement system under the federal Horse Protection Act (HPA) to conduct the bulk of inspections at Tennessee walking horse shows, where some trainers in a segment of the industry intentionally burn or otherwise injure the front feet and legs of the horses in order to induce an exaggerated gait known as the “Big Lick.” These private inspectors are employees of horse show organizations and are often exhibitors of Tennessee walking horses themselves.

A 2010 audit by the USDA Inspector General exposed how horse trainers go to great lengths to evade detection and industry inspectors often disregard violations. So flawed is this system of industry self-policing, the audit recommended that the agency abolish it and resume full oversight authority over the industry. In a decision that further exacerbated the ineffectiveness of this program, in 2015, the Fifth Circuit ruled that the USDA cannot require these private inspection programs to impose penalties under the HPA, thus making violations cited by those programs (in the absence of USDA inspection or enforcement action) immune to the penalties contemplated by the Act.

Representatives Ted Yoho, R-Fla., and Kurt Schrader, D-Ore., both licensed veterinarians, introduced legislation, the Prevent All Soring Tactics (PAST) Act, which would do away with this failed system, impose tougher penalties on perpetrators, and ban the use of stacks and chains commonly used to inflict pain on the horses’ feet. Their legislation has the bipartisan support of 277 cosponsors in the House — nearly a two-thirds supermajority of the chamber — and is endorsed by hundreds of horse industry, veterinary, and animal protection groups.

What’s the next step in this USDA abdication of authority? We don’t have to use too much imagination to guess that the American Kennel Club (AKC) — which fights state and federal bills to crack down on puppy mills and profits from registering dogs from these delinquent operators — would be at the top of the list to take on inspection authority of commercial dog breeding facilities under the Animal Welfare Act. While the AKC holds itself out as “the dog’s champion,” on numerous occasions, law enforcement has rescued imperiled dogs from substandard AKC-inspected breeding facilities — and, in some cases, facilities that had just days earlier passed an AKC inspection.

In 2012, the HSUS and local law enforcement groups rescued 60 dogs from the facility of AKC breeder Mike Chilinski, many of them emaciated and suffering from open wounds. Chilinksi disputed the charges, testifying that he was confident he was in compliance because he had recently passed an AKC inspection. Despite his protests, a court convicted him and sentenced him to a lengthy prison term. There have been plenty of other cases involving AKC-registered breeders. What’s more, while the AKC claims to conduct inspections, it provides no reports on the results of the inspections or any penalties meted out to delinquent breeders.

The new USDA proposal would apply to exhibitors as well, including facilities that maintain some of the world’s most dangerous wild animals. While the Association of Zoos and Aquariums is a very reputable organization, with a robust accreditation system for its 230 or so members, there is another deceptively named organization called the Zoological Association of America that is something of a front for the exotic animal industry and roadside zoos, with an inspection process that is anything but rigorous. The HSUS estimates that there are as many as 2,000 roadside zoos, and having ZAA inspect the facilities would give these operators a free pass to keep the animals in substandard facilities and to allow a bad situation to become worse.

The situation for animals in laboratories would be no better. The Association for Assessment and Accreditation of Laboratory Animal Care (AAALAC) would likely be tapped to do inspections for laboratories and use of animals in research. This is an industry organization, and the findings of AAALAC’s site visits are not made public, there are no penalties for noncompliance, and site visits are infrequent and scheduled (rather than unannounced), providing the opportunity for facilities to clean up their act before the site visit team arrives. A 2013 HSUS undercover investigation at Texas Biomedical Research Institute revealed serious welfare problems, and the facility has been cited for several Animal Welfare Act violations by the USDA over the years. Despite this, it remains AAALAC-accredited.

The USDA should be moving in the opposite direction — more transparency, tougher enforcement of existing regulations, and strengthening those regulations to improve living conditions for dogs. Congressmen Mike Fitzpatrick, R-Penn., and Charlie Crist, D-Fla., have introduced two bills to strengthen enforcement and to fortify regulations. Other lawmakers, led by Rep. Earl Blumenauer and Sen. Ron Wyden, both Democrats from Oregon, have introduced legislation to require the USDA to restore inspection and violation records on the USDA’s searchable website.

If the 2017 data takedown was not perhaps the most outrageous maneuver in contemporary times by the USDA to cover up for the industry, it is eclipsed only by this reckless and backward-looking proposal. American citizens and Congress should not stand for it. It’s not a cost-saving measure — it is a financial and regulatory giveaway to private industries with notable records of non-compliance or outright disobedience to the law. We shouldn’t outsource enforcement to industry any more than we would put the beef industry in charge of food safety and humane slaughter inspections at slaughter plants, or allow the construction industry to oversee all workplace safety on the job.

The USDA has already been too lenient toward these industries, blurring the line between the regulators and the regulated community.