Can these work? Do we really need them? Let's discuss 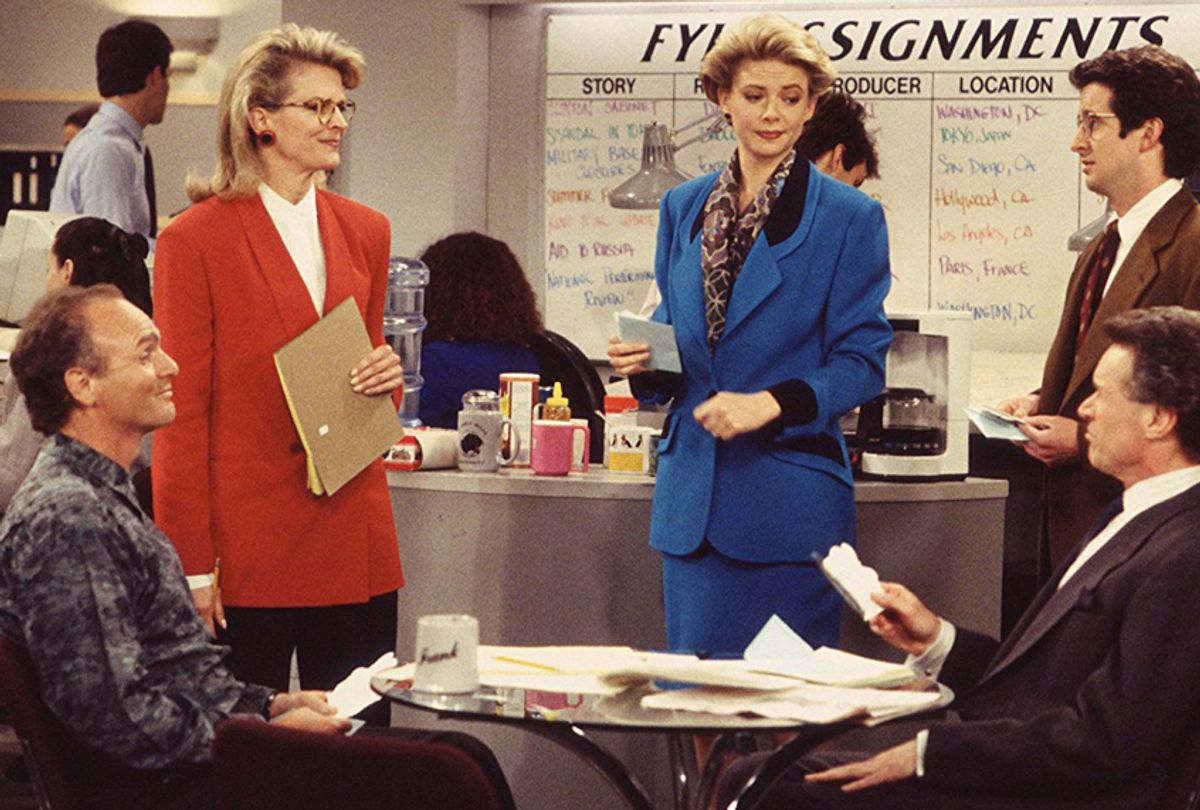 Reboot mania is showing no sign of calming the hell down if this week’s announcements tell us anything. And they do — they tell us a lot. Between Wednesday and Thursday, CBS, the CW and ABC each announced its intent to retrofit much-loved blasts from our collective TV past to speak to today’s audiences.

CBS is bringing “Murphy Brown” back for the 2018-19 season with a straight-to-series, 13-episode order. “Charmed,” a WB classic, has received a pilot order at The CW. Meanwhile ABC, already resurrecting “Roseanne” for a spring debut, is tuning up a reboot of Stephen J. Cannell’s 1981 comedy “The Greatest American Hero.”

These speak to the most marketable aspect of today’s audience, which, in case you haven’t noticed, is female. See, while the original “Greatest American Hero” starred William Katt, the new underprepared owner of that supersuit will be a woman.

Feminism is in! Women are on the march! To Madison Avenue and the TV industry that spells a potentially fresh way to attract dollar bills, dollar bills y’all. In a game riddled with uncertainty, which is all the art of broadcast programming has even been, familiar brands have the greatest chance of being noticed in the crowd. And if the titles in question can speak to dominant conversation of the moment, all the better.

Dusting off and updating classic properties only works to a point. Bearing that in mind, let’s consider what each of these revivals has to offer and gauge whether taking them out of cold storage will be worth the trouble.

A key lesson recent seasons have taught us is that if a network can get the original band back together, like NBC did with “Will & Grace,” the viewers will be there for it with enthusiasm. ABC is banking on that theory with its “Roseanne” revival, and early signs show the network stands to be rewarded, initially, at least.

Fortunately that’s what we’ll be getting with the return of this CBS classic about a TV journalist and news anchor who holds her own against opportunistic politicians real and fictional and does not suffer fools. Candice Bergen is set to reprise the title role, and just as important, the original series’ creator Diane English will be serving as the new series’ writer and co-executive producer alongside Bergen. At present there’s no word on which other members of the original cast who are still alive will be signing on. (Robert Pastorelli, who played Murphy’s confidant and ever-present painter Eldin Bernecky, died in 2004.)

“Roseanne” received a green light in part because it fit the industry mandate that dominated the previous pilot season in that it speaks to the paradigm of the working-class viewer. But the year that followed yielded a resurgence in feminism, not just as a movement but as a brand. “Roseanne” returned after a video clip from “The Talk” proved popular, and a similar viral video smoothed the way for the “Will & Grace” revival.

Multiple Emmy and Golden Globe-winner “Murphy Brown” doesn’t need such a test case; the political and social environment is doing that right now.

Because if there were ever a time for a network comedy about a female anchor of a certain age to be on the air — one with sharp wits and a steel backbone, who embraced single motherhood and was consistently ready to shut down misogynists, including former Vice President Dan “Potatoe” Quayle — it’s in our era of “fake news” and a social media-driven information cycle that flies at lightning speeds.

The original “Murphy Brown” debuted three decades ago and ended nearly 20 years ago, inspiring a generation of professional women who have since wrestled with the merits and fallacy of “leaning in” and “having it all” and everything in between. Somehow I expect English and Bergen will have a lot to say about these issues and many others yet to be presented, making this revival potentially something more than pandering to nostalgia. Done right, it could be precisely the balm of reason we badly need.

“Charmed”: The CW has ordered to pilot.

A generation of women fondly recalls the adventures of the Charmed Ones, sisters whose inherited powers of witchcraft grants them the power to protect the innocent.  Prue, Piper and Phoebe Halliwell (Shannen Doherty, Holly Marie Combs and Alyssa Milano, respectively) were the first bonded by the Power of Three. Following Prue’s untimely death, Paige (Rose McGowan) stepped in to keep the magic alive.

The CW has been discussing a reboot of “Charmed” for some time now. However, the notoriety of the original’s cast, Milano and McGowan in particular, likely put some fresh sparks in to the revival’s engine.

Previously the update was going to be a prequel set in 1976,  but this new version is set in the current day.  Behold the CW’s description: “this fierce, funny, feminist reboot of the original series centers on three sisters in a college town who discover they are witches. Between vanquishing supernatural demons, tearing down the patriarchy, and maintaining familial bonds, a witch’s work is never done.”

One might be under the impression that the original Charmed Ones would be delighted to see their old show made anew. One would be very wrong, at least from Combs’ perspective.

“Here’s the thing,” Combs stated on Twitter. “Until you ask us to rewrite it like Brad Kern did weekly don’t even think of capitalizing on our hard work.”

What she’s referring to is a little-known fact only recently revealed in a recent interview with Milano in which she spoke of then showrunner of “Charmed” Kern’s dismissive behavior toward the three leads, forcing them to step in as on-set producers. Kern, currently the showrunner on “NCIS: New Orleans,” has been the subject of two HR investigations at CBS stemming from allegations of sexual harassment and discriminatory behavior, a pattern that extends back to his time working on “Charmed.”

Meaning, he won’t be back — thank goodness — but, at present, Combs, Milano and McGowan probably won’t either.

That said, the pilot’s production pedigree is pretty solid: Jennie Snyder Urman, the creator and showrunner of “Jane the Virgin,” is taking the lead alongside fellow writers and co-executive producers Jessica O’Toole and Amy Rardin, along with executive producer Ben Silverman.

“The Greatest American Hero”: ABC has ordered to pilot.

Tempted as I am to say that the why of this revival seems inexplicable, it actually does make a bit of sense. Way less than these other two, I should add, but there is a decent amount of affection for the original, whose long life must be in some way attributable to George Constanza’s memorable interpretation of the theme song for his answering machine.

The superhero genre is still hot but overly ripe for parody, and at present, the only title that’s taken that on with limited success is Amazon’s “The Tick,” a reboot in itself.

Replacing the original’s curly-haired white guy will be an Indian American woman, described as “a 30-year-old woman who loves tequila and karaoke and has spent her life searching and failing to find meaning, much to the chagrin of her traditional Indian-American family. An inexplicable event occurs that will change the course of Meera’s life forever when she is entrusted with a super suit to protect the planet.”

Meaning, if nothing else, the new “Greatest American Hero” will bring more Asian American characters to television, a demographic still sorely underrepresented. In the writers room writer-producer Rachna Fruchbom and Nahnatchka Khan, both of “Fresh Off the Boat,” will executive produce alongside Mandy Summers and director Tawnia McKiernan, Stephen Cannell’s daughter.

Remember, out of these three titles only “Murphy Brown” is guaranteed to see the light of day. In the event these other revivals don’t get picked up, at least we have that one to look forward to. Besides, given the times in which we’re living, the most potent inspiration may be gleaned from real women facing real obstacles, and who don’t have special powers to call upon.

Magic and might are wonderful to watch, but given all that life has thrown at women these days, news of a “Murphy Brown” revival may resemble something akin to a miracle for some. Right now, maybe that’s enough.

In case it isn't, on Friday CBS revealed it also has ordered pilots for remakes of the 1980s hits "Cagney and Lacey" and "Magnum P.I." Looks like the hits just keep on coming . . . back.