Bill Clinton and UFOs: Did he ever find out if the truth was out there? 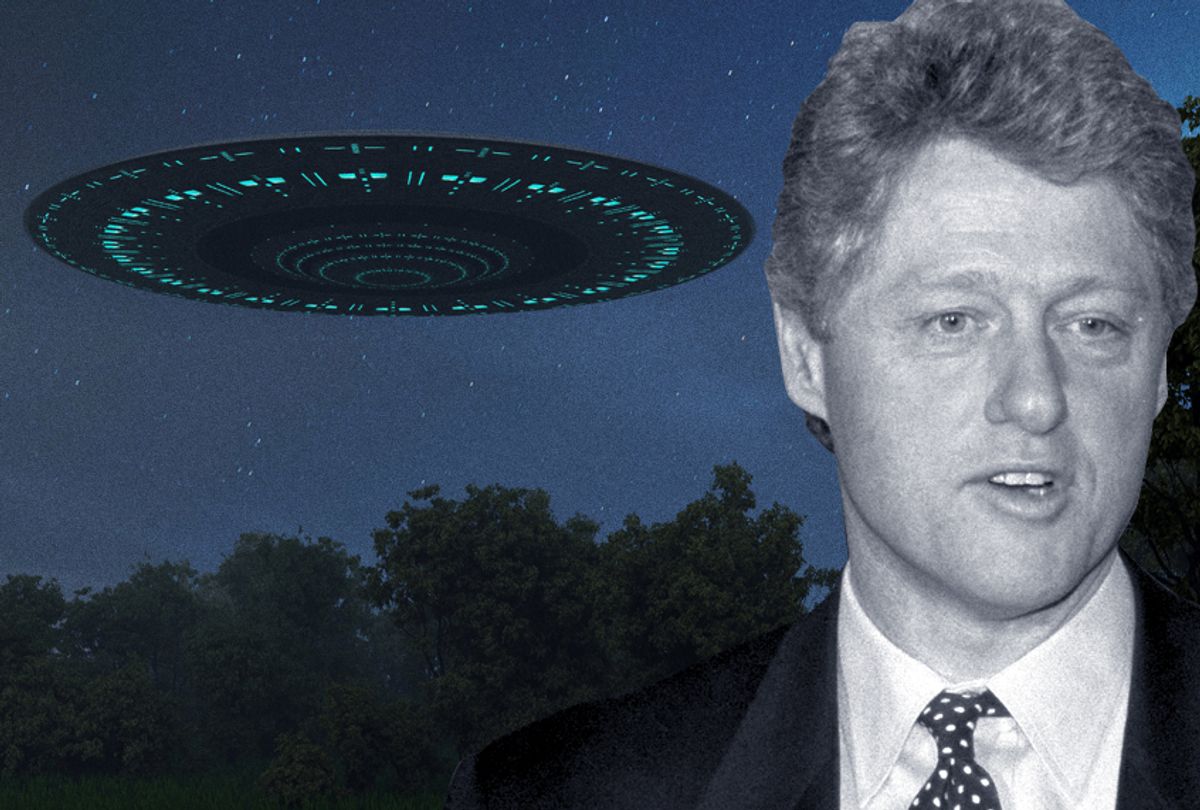 In 1999, the House of Representatives passed a bill that would have required across-the-board cuts to most federal agencies and depart­ments, including the Department of Education, which President Clinton learned about as he was about to meet with a delegation of edu­cators. The budget cuts also meant that teachers would probably not be getting any raises, something that irked Clinton to the point where, in an impromptu and unscripted remark, he said, channeling Ronald Reagan’s famous statement, “If we were being attacked by space aliens, we wouldn’t be playing these kinds of games.” Funny how when Ronald Reagan said the same thing to the United Nations, folks commented that Reagan sure knew how to illustrate a point. When Clinton made his statement, Rush Limbaugh thundered into his microphone, “What’s he going to do, arrange one?”

Just three years earlier, while on a trip to Ireland where he was visiting a very troubled Belfast, Clinton read a letter he received from a child named Ryan, who had asked him about what he knew regarding stories of a UFO crash at Roswell, New Mexico. Clinton hadn’t come to talk about UFOs. He was trying to make a point regarding how children can be victimized by political violence. In front of his Belfast audience, Clinton said to Ryan, “No, as far as I know, an alien spacecraft did not crash in Roswell, New Mexico, in 1947.” But then he added, to the delight of his audience, “and Ryan, if the United States Air Force did recover alien bodies, they didn’t tell me about it, either, and I want to know.”

Clinton did want to know, Webster Hubbell, Clinton’s associate attor­ney general, wrote in his own memoir. As AAG, Hubbell claimed that President Clinton asked him to find out all that he could about two things: who killed JFK and what the government knew about UFOs. He reported to the president after being stonewalled by the relevant agencies that there was a secret government that closely holds secrets to which the president doesn’t even have access.

However, in 1993, the year Clinton was inaugurated, and as pressure was mounting on the CIA to confirm that it had followed UFO stories, Director of Central Intelligence James Woolsey “ordered another review of all Agency files on UFOs. Using CIA records compiled from that review, the study he ordered traced CIA interest and involvement in the UFO con­troversy from the late 1940s to 1990.” The report reveals that despite official statements to the contrary regarding the government’s interest in what hap­pened at Roswell, the air force did, in fact, open up an investigative unit, known first as Project SAUCER and then Project SIGN, to “collect, collate, evaluate, and distribute within the government all information relating to such sightings, on the premise that UFOs might be real and of national security concern.”

The CIA report reveals that the agency followed the air force investigations into UFOs, especially the invasion of Washington, D.C. airspace in 1952, and the reports of pilots and radar operators who said they were seeing images they could not identify and did not seem to represent conventional aircraft. The report continues to explain the nature of CIA involvement in UFO cases over the decades and, without making the point explicitly, implies that despite any official denials, and, moreover, very rel­evant to the background of George H. W. Bush, the agency was very active in UFO research, had compiled voluminous files on UFOs, and had much to share with any American president, should the DCI have reason to do so. The report must have been a real eye-opener to President Clinton, not so much because of what truths behind cases it revealed or did not reveal, but simply that the files that the president had dispatched Webster Hubbell to locate, files that Hubbell said had been kept from him, now, albeit sanitized, were available to him.

According to Jon Austin in the UK’s Express, as far back as Bill Clin­ton’s first term in office in 1993, Hillary Clinton was talking up UFOs with Laurence Rockefeller, who funded initiatives to research UFOs almost as a way to counter what the Condon Report had argued as well as making its own case for the study of the possibility of extraterrestrial visitations.

“From early 1993 the businessman began a lengthy approach to Bill Clin­ton for disclosure, including files held by the CIA, in what became the Rockefeller Initiative.” Further, Austin writes, “During the Clinton family seven-day vacation in August 1995 at the Rockefeller Teton Ranch outside of Jackson Hole, Wyoming, the 85-year-old billionaire privately briefed the President and First Lady on UFOs and his hopes.

“No one else knows exactly what was said, but at the time Mr. Clin­ton, who had a personal interest in UFOs and was frustrated at the lack of information he could glean on it, was carrying out a review of how the Government handled confidential material.” For a scientific review of the Laurence Rockefeller conference on UFOs at Pocantico Hills, the basis for the Rockefeller conclusions about the need to research the UFO phenom­enon further, see Peter A. Sturrock’s analysis "The UFO Enigma," in which Rockefeller himself explains the purpose of his initiative.

The Clinton perspective on UFOs, however, took a dramatic turn in March 1997, the time of the Phoenix Lights, the arrival of the Hale-Bopp comet, and the Heaven’s Gate mass suicide, when President Clinton himself would become involved in the most media covered UFO appearance since the 1952 invasion over Washington, D.C.

On March 13, 1997, the stage was set for thousands of witnesses across the southwest scanning the sky for the appearance of the Hale-Bopp comet — for comet watchers, a once-in-a-lifetime event. But it wasn’t just a comet that residents of Phoenix saw on that warm March night. The story actu­ally began before 8:30 p.m. when witnesses in Henderson, Nevada, at the Arizona border reported a strange sight, six orange lights in a triangu­lar pattern slowly moving toward the southeast and making no sound except for what the observer said was the wind. About fifteen minutes later another witness, this time behind the wheel of his car, saw a formation of lights heading his way as he drove north. He headed home, retrieved binoc­ulars, and kept watching the lights as they headed south and west towards Phoenix.

Within minutes [of these] sighting, folks just north of Phoenix began seeing the lights off in the distance to the north-northwest, heading their way. It passed right over private streets, possibly as low as 100-150 feet, and traveling slowly toward the south. Then it seemed to stop dead in the air. It hovered. Then it picked up motion and continued through the narrow valleys toward the outskirts of the city suburbs where more people, some on the roads, some standing on their balconies, spotted the object, which many people described as unearthly.

One of the witnesses was Arizona governor Fife Symington, who said in 2007 and on "UFO Hunters" that despite what he said at his faux news con­ference when he had his chief of staff dress up in an alien garb and show up as the explanation for the lights, Symington himself saw the 8:30 lights from his own backyard and said they were not a conventional craft because the object he saw flew too slowly for an airplane, did not have the thwap­ping sound of rotor blades like a helicopter, and was completely noiseless. A plane would have stalled at the speed it was moving, a helicopter would have shown distinct navigation lights and made a noise, especially at the low altitude at which it was flying, and the lights made the craft larger than a football field. Also, Symington said that as commander in chief of the Arizona National Guard and Air National Guard, he called Luke Air Force Base and was told no military craft were in the sky at 8:30 over Phoenix. Thus the lights were not confirmed as military by the Air National Guard.

About two hours after the first sighting of the lights, a second set of lights flew over the same area, causing even more confusion and frenzy than the first set. Were the 10:30 lights over Phoenix a different object, the same object returning, or flares from air force or National Guard planes scram­bled to establish a conventional explanation for the 8:30 lights? At first, when the 10:30 lights appeared, residents called Sky Harbor air traffic control again and were told that no planes were picked up on radar. Residents also called Luke Air Force Base again and were told none of their planes were in the air. However, after the initial responses from Luke AFB, the air force said that the lights were ground illumination flares from a flight of A-10 Wart­hogs over the Goldwater test range. Months later, the Maryland Air National Guard announced that there were planes in the air on the night of March 13, 1997, from the 104th fighter squadron flying out of Davis-Monthan Air Force Base in Arizona as the unit that dropped LUU-2B/B ground illumination flares in an exercise over the Goldwater test range. CIA UFO consultant Dr. Bruce Maccabee conducted a triangulation analysis of the events and said that it was indeed likely that the second formation of lights were flares that could be seen even though they were many miles south of the Phoenix area at 10:30. However, photo analyst Jim Dilettoso of Arizona’s Village Labs said that after he had performed a spectral analysis of the lights, he determined that the colors of the lights were inconsistent with flares.

Witness and award-winning filmmaker Dr. Lynne Kitei has said that the 10:30 lights were not flares and that subsequent flare-dropping demon­strations by the air force to prove that flares were what people in Phoenix saw on the night of March 13, 1997, showed, again through an analysis of the aerial performance, the colors and the residue actually proved that what witnesses saw were not flares. The controversy over the nature of the lights still remains today.