Should teachers be armed in schools? 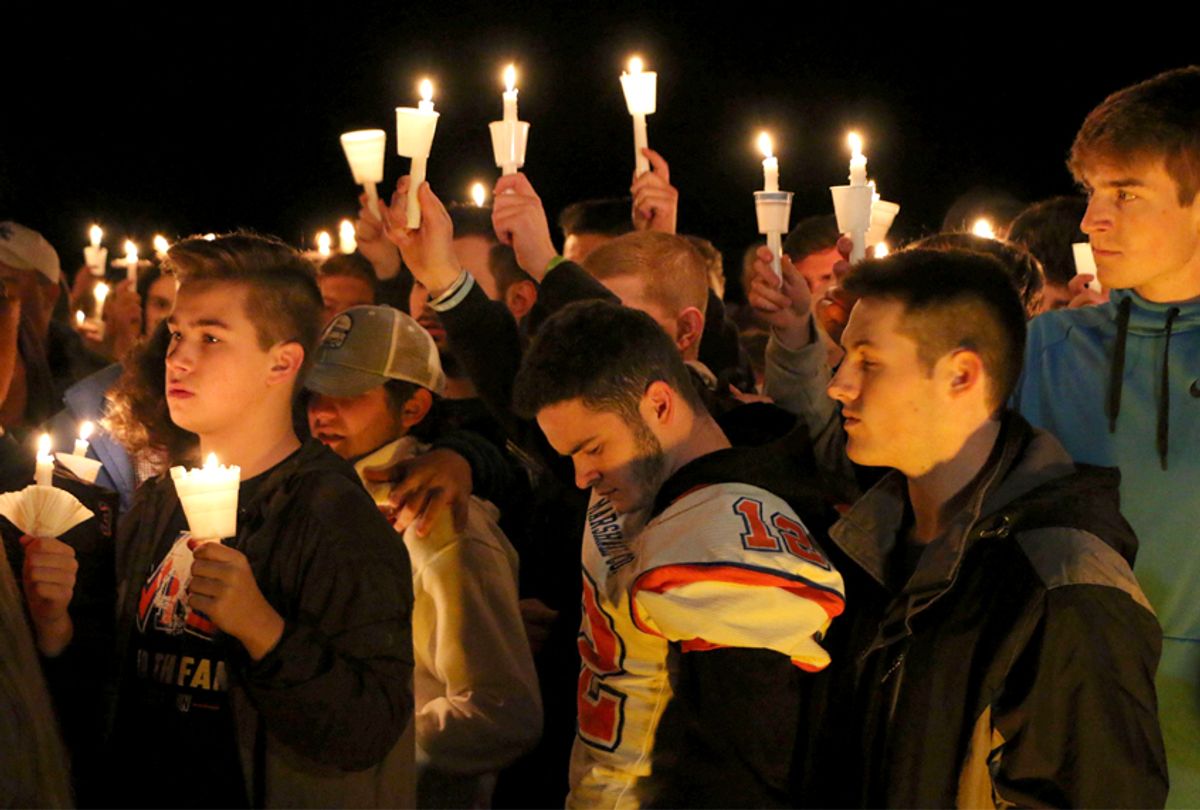 People attend a vigil for the victims of a fatal shooting at Marshall County High School, Jan. 25, 2018 (AP/Robert Ray)
--

Sometimes, "How could this have happened?" isn't the only question we should be asking.

After two teenagers were shot and killed in their Kentucky school Tuesday by a fellow student, two Republican state senators introduced a bill in the state legislature that would allow school districts to appoint armed "marshals" in public schools. Use of the firearm would be authorized for "the protection of a third person from imminent death or serious physical injury."

Per the Lexington Herald-Leader.

[A] school marshal would be a designated school employee who is already on the payroll and who has a concealed-carry permit, West said. The school would have to identify the marshal to Kentucky State Police as part of its “active shooter” response plan, so that officers arriving during a crisis would know which employee is armed. The marshal’s gun would have to be safely locked away at most times.

Bills like this became a subject of debate in many parts of the U.S. after the Sandy Hook massacre in Newtown, Connecticut. But the presence of adults authorized to shoot in school is unlikely to prevent a school shooting before it starts.

Who's going to shoot an armed student who hasn't already fired a shot?

It's one thing to imagine, as the NRA said after the 2012 elementary school shooting that killed 20 children, that an armed security guard or bystander — the mythical "good guy with a gun" — would take down a man armed to the teeth, intent on murdering children. That's the message that the NRA's Wayne LaPierre presented in the wake of that shooting, saying that gun-free school zones "tell every insane killer in America that schools are the safest place to inflict maximum mayhem with minimum risk."

But what if the gunman is a gun-child?

Can a reasonable adult — whether that's a teacher with a gun or an armed school safety officer — make a split-second decision to open fire on the student he or she teaches algebra to or sees in the halls every day?

In the moments before a hypothetical school shooting could be prevented, several things would have to happen in a very short amount of time. First, the armed marshal would have to be in the right place at the right time, and have his or her own gun handy. Even Columbine High School had an armed security guard — a deputized law enforcement officer — and that guard found himself on the outside looking in when Dylan Klebold and Eric Harris opened fire because he was in a parking lot when the shooting began. Having a gun locked away, as the Kentucky law would require, wouldn't prevent the first shots from being fired.

Second, the marshal — who does not have to be a trained police officer — would have to recognize the threat immediately and react with speed and accuracy. In a classroom or cafeteria, they'd have to spot the gun fast, or react swiftly to a verbal warning. They'd have to reach for their gun before the armed student was able to fire. And they'd have to make a split-second decision about whether to open fire before the shooter did. They'd need a clear shot, which can be difficult to secure in any crowded space. Shoot first, call for backup second, or vice versa?

Any error means that someone could die. That someone is likely a kid, with a mother or a father; with a grandmother or grandfather, and with a whole life ahead of him or her.

"Arming a volunteer educator to shoot their own students" is something that Moms Demand Action founder Shannon Watts finds ridiculous. "Educators do not want to be responsible for that." The task of taking down a kid, the gun control group's founder told Salon, shouldn't be expected of educators.

But John Lott, president of the Crime Prevention Research Center, believes that no shots would need to be fired to stop a school shooting. He responded to the Kentucky shooting by writing that it wouldn't have happened if the school had someone armed on campus, and told Salon that there have been school attacks that "were stopped by permit holders" who didn't have to fire their weapons.

Lott gave three examples: a 1997 shooting at Pearl High School in Mississippi, a 1998 shooting at a Parker Middle School dance in Pennsylvania, and a 2002 shooting at Appalachian School of Law in Virginia. In the latter, the shooter was taken down by two men with guns — those men happened to be law enforcement officers. The Parker Middle School shooting was at an off-campus event and was stopped by the facility's owner bringing out his shotgun. In the Pearl High School incident, the fleeing gunman was detained at gunpoint.

In all three cases, at least one innocent person was shot and killed before the gunman was stopped.

"The point that I would emphasize is that if you look through all the fears that are frequently mentioned in connection with allowing permit holders to stop attacks, none of the problems that are alleged to occur such as the permit holder shooting a bystander or being shot by a police officer have occurred," Lott said.

Watts didn't buy that argument. Educators are "not going to school to become sharpshooters," she said.

It's one thing to stop a gunman who has already opened fire. But it's another thing to anticipate that any student could become a shooter and take preventive actions. That's what makes President Donald Trump's proposals for increasing community safety so dangerous.

On Wednesday, the president promoted his plan to give "excess" military equipment to local police departments. While he didn't tie the further militarization of local cops directly to school shootings, he did tout the plan as being in line with the belief that "every child deserves to live in a safe home, attend a great school."

Bringing high-powered weapons into schools is an idea that both sides of the gun debate have panned. Watts called it an "absurd solution," while Lott warned that putting "someone in uniform to guard a target is like putting someone with a neon sign above them saying, 'shoot me first.'"

If the goal is to stop school shootings, maybe one strategy should be to stop guns from getting to schools in the first place. Watts said that all school shootings have something in common: The guns used weren't securely stored. They weren't locked. They may not have been unloaded.

Through its "Be smart for kids" initiative, Moms Demand Action outlined steps that gun owners should take.

Thoughts and prayers aren't going to stop school shootings. Armed guards and armed faculty members probably won't. And so, today, we're in the space between mourning the last school shooting, and waiting to mourn the inevitable next one.