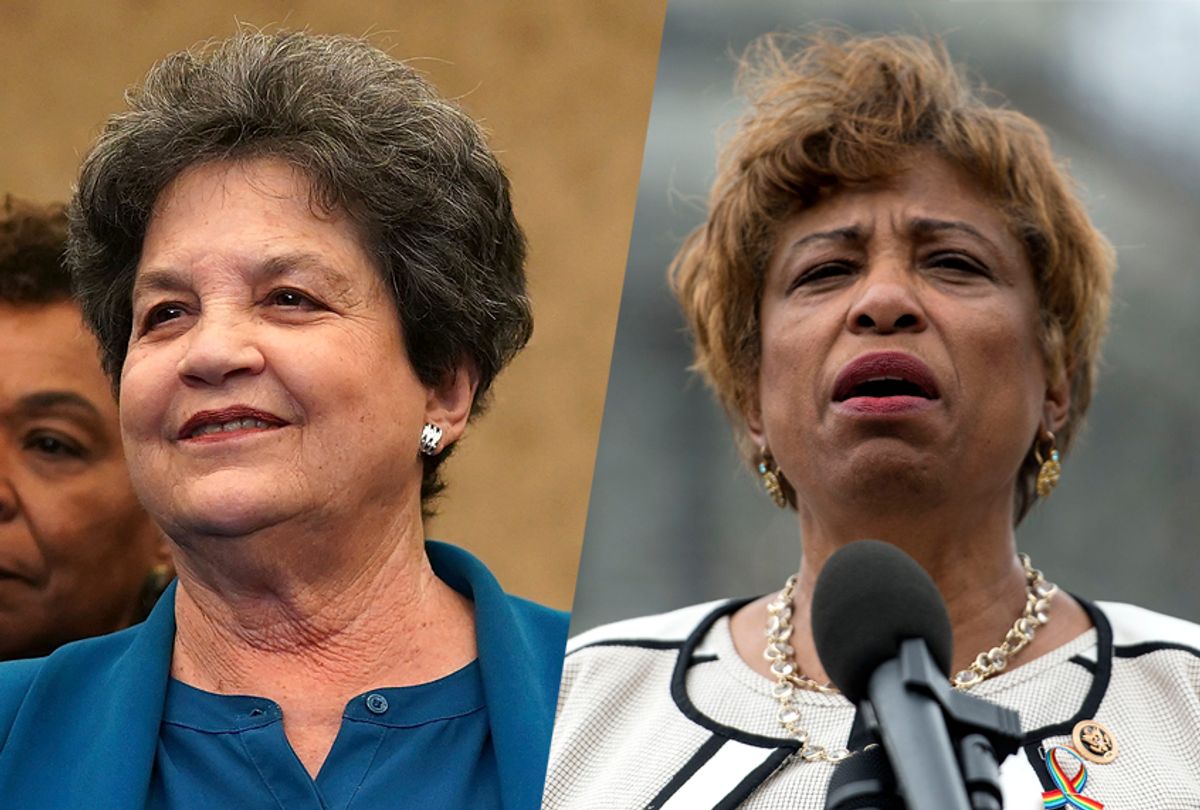 In February, Donald Trump gave a State of the Union-esque address to Congress, and Democratic women used the occasion to make a sartorial statement by wearing white, in honor of the suffragist movement and to indicate resistance to the Trump administration's hostility towards women's rights. A year into Trump's presidency, on the night of his first State of the Union address, the Democratic women will be appropriately clad in a more mournful color: Black.

The choice is an overt reference to the movement of women in Hollywood who have been wearing black to awards shows as a form of protest against sexual harassment in their industry and others. At events like the Golden Globes and the Grammys, stars wore black in support of Time's Up, an effort to raise funds to support women battling sexual harassment in less lucrative industries, and for the #MeToo movement against sexual harassment and abuse in general. The black clothing made an impression, and now congressional women, or at least the Democrats, are making the same statement in the less glamorous corridors of power in Washington.

“It’s a show of solidarity with these movements of workers across the country to have safe, dignified, respectful workplaces where you’re free of sexual harassment and where there is a fair opportunity to be paid for the value of your work," Rep. Lois Frankel, D-Fla., chair of the Democratic Women's Working Group, told Salon.

Frankel's group, which was also behind last year's all-white wardrobe choice, is organizing the black clothing statement this year. Many members of Congress, led by Rep. Brenda Lawrence, D-Mich., and the Congressional Black Caucus, will also be wearing red pins to commemorate Recy Taylor, an activist whose attempts to get justice after being gang-raped in 1944 helped catalyze the growing civil rights movement of the era. Other members will wear Time's Up pins, to support a more systematic and comprehensive effort to stop sexual harassment.

When the Democratic women's decision to wear black was first announced in the earlier part of January, many on the right heaped disdain on the congresswomen, trying to paint them as fluffy-headed lightweights who are all talk and no action.

"Gimmicks like this are little more than shallow virtue-signaling," sneered right-wing writer S.E. Cupp in a Jan. 11 article. She argued that "as far as we know, there are no plans in Washington to invite activists in the #MeToo movement to attend as guests of lawmakers."

This, readers will not be surprised to find out, is flat-out false. On the contrary, Democratic lawmakers are pointedly inviting a broad array of activists and other figures — some of them survivors — who have worked to fight sexual abuse and harassment in all its forms.

Frankel told Salon her guest will be Laura Germino of the Coalition of Immokalee Workers. Germino helped spearhead an effort called the Fair Food Program, which sets standards to protect agricultural workers from abuse, including sexual abuse. So far, the program has had huge success in curtailing labor rights abuses in Florida tomato fields and there's hope that its practices can be expanded.

Other guests who will accompany Democratic congresswomen include sexual assault survivor Chessy Prout, National Women's Law Center president Fatima Goss Graves, and Danielle McGuire, the historian who revived interest in Recy Taylor's story with her 2011 book "At the Dark End of the Street: Black Women, Rape, and Resistance."

Frankel assured Salon that congressional women's efforts will extend past some photo opportunities and press conferences around the State of the Union.

"Over the next several months we will be holding hearings," she said, "to hear the stories of Me Too survivors across the country, in all industries," in hopes of developing policy ideas to improve working conditions for American women across the board.

Outside the halls of Congress, activists are using the State of the Union to spotlight the growing #MeToo movement in other ways. A network of activist groups, including the National Domestic Workers Alliance, the National Farmworker Women’s Alliance, MomsRising, Planned Parenthood and Girls for Gender Equity will air a counter-program to Trump's speech at the National Press Club. It's titled "The State of Our Union," and organizers hope to attract an audience of people who, for understandable reasons, don't want to listen to Trump praise himself and lie to the public for however long he will be able to read off a teleprompter.

“2018 is a critical year for women," said Ai-jen Poo of the National Domestic Workers Alliance in an emailed statement. "We have already demonstrated that we are willing to carry more than our share of the weight in defending our democracy. It’s now time for action and solutions  —  on everything from sexual assault and harassment to low wages and pay equity, from elder care and childcare to paid family leave."

With all this discussion of sexual harassment, it's hard to ignore the allegedly 239-pound orange gorilla in the room. Trump has been repeatedly accused of sexual abuse, often by women who encountered him while trying to do their jobs. Trump himself inadvertently backed these women up, when that now-infamous "Access Hollywood" recording, in which he bragged about kissing and groping women without their consent, was released during the 2016 campaign. Having scores of women using his speech as an opportunity to speak out against abuse at the hands of powerful men not dissimilar to him is exactly the sort of thing that could get under Trump's skin.

When asked whether she was worried the black-clothing protest might provoke Trump, however, Frankel laughed.

“Well, you know, I’m sure he’ll think it’s about him, because he thinks everything’s about him," she said, noting that it was true enough that Trump has "had his share of accusers come forward."

That said, she added, "This is a much bigger issue than Donald Trump. Our statement is really not aimed at him. It’s a showing of solidarity with workers throughout America in every industry."