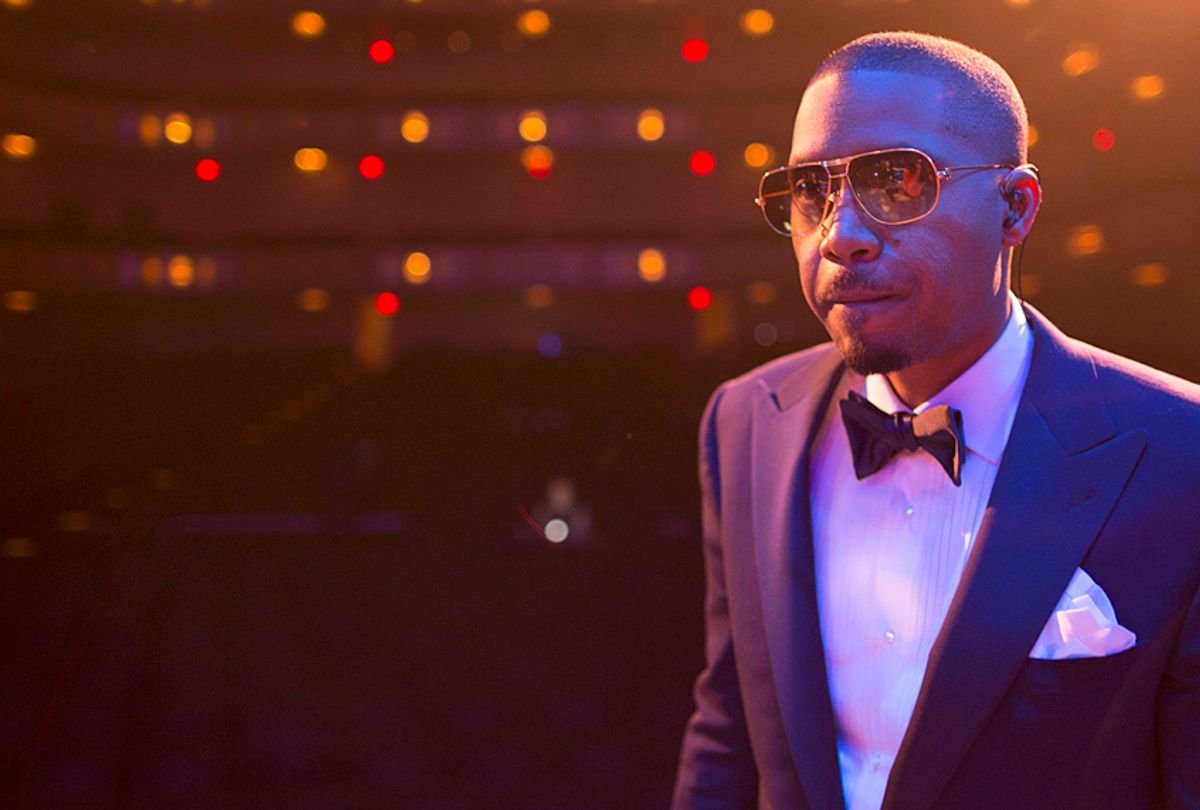 Four years ago the world was treated to the wondrous sight of Six Mix-A-Lot bumping “Baby’s Got Back” as the Seattle Symphony provided a live accompaniment. A bevy of women joined the rapper onstage at Benaroya Hall to shake it (shake it!) shake it (shake it!) shake their healthy butts as the strings section dutifully kept time with the percussion.

The effect was stunning. A video of the moment went viral soon after, entertaining most but causing a good deal of concern among classical music connoisseurs. Did it serve the cause of putting more (and younger) backs in audience seats or was it merely a risqué stunt? Heaven forbid the most hallowed form of high culture be in some ways sullied by a genre that grew up in urban streets.

Insinuated within that viewpoint is the supposition that beyond the occasional sampling from “Carmina Burana,” hip-hop and classical music are strange bedfellows at best, united in service of gimmickry or bombast. Sometimes, and with some songs, that’s the case.

But I defy anyone who watches this week’s “Great Performances” installment, “Nas Live From the Kennedy Center: Classical Hip-Hop,” to emerge on the other side of that hour without transforming their concept of classical music’s adaptability and the heights to which hip-hop can soar.

“Great Performances” is no stranger to popular music by now. The Foo Fighters, for example, received their due on the venerable program and we’re guessing that few people blinked at having them. Rock has long been established as a classic form, mainstreamed enough by any number of documentaries and showcased on the likes of “Austin City Limits” and other series.

“Nas Live From the Kennedy Center: Classical Hip-Hop,” premiering Friday at 9 p.m. on PBS member stations (check your local listings) represents the first time an episode of “Great Performances” is headlined by a hip-hop artist. The series has flirted with the genre in previous installments, such as last year’s documentary featuring excerpts from the Broadway hit “Hamilton” and an appearance by Naughty By Nature on 2016’s “GRAMMY Salute To Music Legends.”

Naughty By Nature had a number of mainstream radio hits the average PBS viewer may have encountered while, say, shopping at the mall. Relatively speaking, they’re a “safe” choice.  Just a few minutes into “Classical Hip-Hop,” as staid violinists play behind him, Nas blasts through “N.Y. State of Mind,” setting fire to lyrics about crack deals, blunts and guns. Then he gets the audience to call out its signature lyric, “I never sleep, ‘cause sleep is the cousin of death!”

“Illmatic” is not a safe choice, and it’s also a masterpiece of modern American music that’s been praised and analyzed by music critics and academics time and again. That makes this first a long time coming, and leaves no room to dispute the artistic merit of mixing one respected form of music with another that seems completely disparate.

The concert was filmed in 2014, marking the 20th anniversary of Nas’ landmark hip-hop album “Illmatic.” That work is considered by many to be one of the finest, if not the definitive best, recordings of the genre, and the collaboration between Nas and the National Symphony Orchestra amplifies the work's passion and drama in ways that are unexpectedly moving.

“Illmatic” is a seminal work of hip-hop that speaks of the poverty and violence the artist was surrounded by while growing up in New York’s Queensbridge projects, as well as his determination despite the odds. Nas’ debut album initially attracted controversy for scoring a coveted and rare five mic rating from The Source magazine, an achievement that eluded other legendary hip-hop records by artists with more experience.

But “Illmatic,” like those other albums (some of which were subsequently re-rated to five mics), holds up even two decades since its release because it captures a feeling. The lyrics marry a raw, street-level energy with a signature East Coast chill, manifesting politics and metaphor in one spot. It’s a cultural statement, history and the news in one swoop.

Prime inspirational material for symphonic adaptation, in other words. Classical music is storytelling via individual instrumentation, with characters and acts performed by strings, woodwinds, brass and percussion, speaking to emotion via melody. “Classical Hip-Hop” recognizes this idea, this feeling, in a way rarely seen or experienced with such intimacy on television.

And while featuring a hip-hop artist, let alone one whose unedited lyrics are full of profanity and peppered with the N-word, may strike a portion of public television’s more genteel viewers as pandering to pop culture, this is not at all the case.

Sitting through a few minutes of “Classical Hip-Hop” clarifies that point beautifully, with the hour moving back and forth between Nas telling the story of his upbringing and the environment that inspired “Illmatic,” to members of the symphony sharing their experience of tuning up its orchestral accompaniment.

These non-musical excerpts add context to the narrative of the tracks on “Illmatic,” but they also contain moments of inadvertent humor. A favorite is when a very proper-looking symphony staffer relates her experience of getting to know the music via her son and says, with absolute sincerity, “And now my very favorite line is, ‘Life’s a bitch and then you die/ that’s why we get high/’Cause you never know when you’re gonna go.’”

Giggle if you like, but the seriousness with which the Symphony Orchestra handles arranging its accompaniment comes out in the music. In a scene from rehearsal an expression of awe washes over Nas’ face as he marvels at walking into the hall, seeing an orchestra interpret his work. “A bunch of white people with strings, and all of that, playing this album,” he says. “And they feelin’ it!

As does the audience, which cheers and applauds the orchestral swells with as much zeal as they meet Nas’ nostalgic trip through his best work. Here, then, is a marriage of genres treated with equal consideration, with each amplifying the power of the other.

Hip-hop and classical music have joined forces before “Classical Hip-Hop” and even since the event took place. In the film, the National Symphony Orchestra’s principal pops conductor Steven Reineke admitted that the “Illmatic” project struck him as exciting and daunting. A year later, the Symphony Orchestra accompanied Kendrick Lamar as they performed selections off of “To Pimp a Butterfly.”

Whether performances like these succeed in injecting new blood into the classical music audience has yet to be quantified, and probably is beside the point. For “Great Performances,” though, this signifies the gravitas with which the series is taking its democratizing mandate to make the best artistic performances accessible to all viewers. Most people may never get to a chance to see Nas, Kendrick Lamar or any other top hip-hop performer performing live on one of the nation’s greatest stages.

Nas himself acknowledges, with no shortage of humility, that being on the Kennedy Center stage is breathing rare air. That there are writers, singers and performers that never make it to a stage so grand. He stands as an example that it can be done, and “Classical Hip-Hop” makes it joyful to bear witness.