Do you want to pay a toll to private investors when you ride Trump's federal highways?

$200 billion taken from other programs. Taxpayers borrow $800 billion plus interest. Then come tolls and user fees 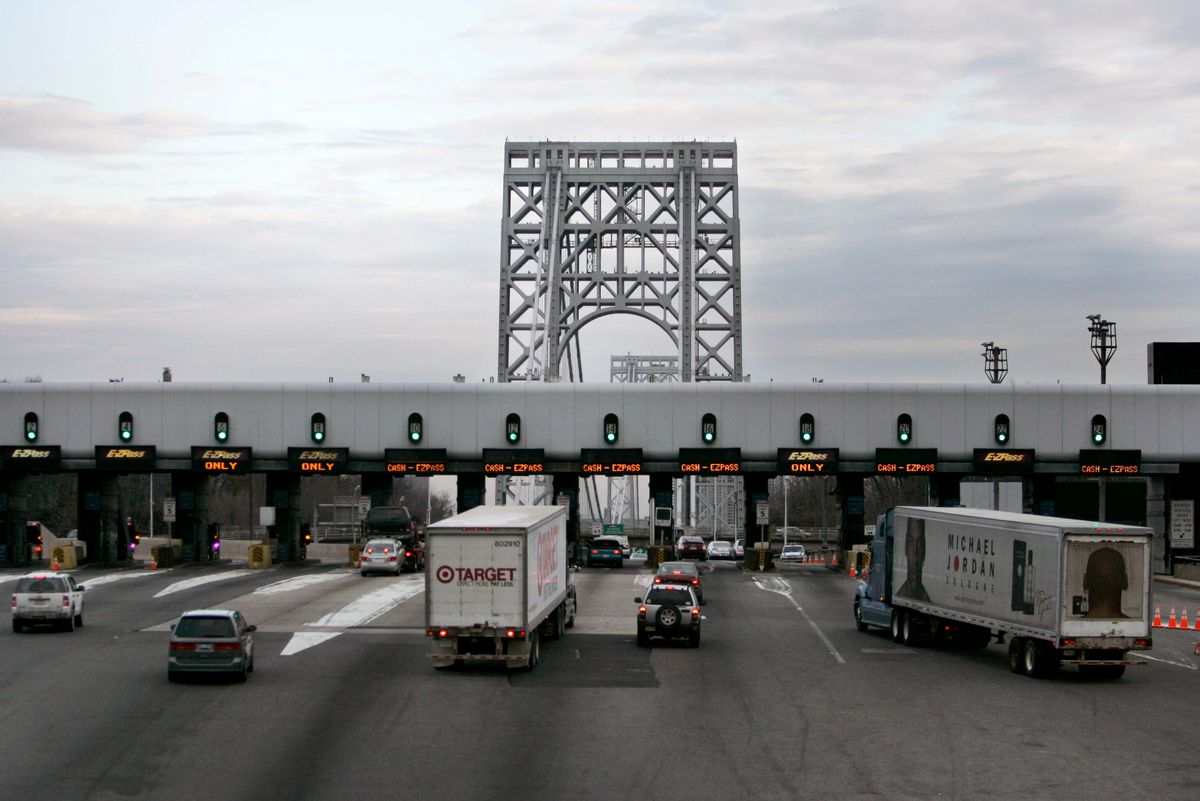 As President Donald Trump delivers his first State of the Union address Tuesday, pay close attention to his next big priority — an infrastructure plan — which, over time, could eclipse the trillion-dollar giveaway to the rich in the GOP’s just-passed tax plan.

And track the response from Democrats, who will have to decide if they will back a plan drafted by privatization proponents, or if Democrats will represent the public and say no to years of paying off infrastructure bonds sold by Wall Street — tax free to investors — but eating up future tax revenues while imposing new user fees like highway tolls.

“[The GOP-passed] tax cuts have slowly opened the door to Wall Street, construction giants, and global water companies, who see enormous potential for profits,” wrote Donald Cohen, president of In the Public Interest, an anti-privatization advocacy group. “Some states and local governments have turned to expensive private financing, a.k.a., ‘public-private partnerships,’ and learned the hard way. Private financing often means higher tolls, parking rates, or water fees, lower labor standards, and less public control over decision-making once a project is up and running.”

The stakes are enormous. Pick a state. Few major infrastructure projects have come in on time and on budget. New York City’s newly opened Second Avenue subway was years behind and billions over budget in that blue state. In red-run Indiana, ex-governor and now Vice President Mike Pence’s signature privatized highway, I-69, is a 21-mile stretch of road that is two years behind and 60 percent built. The vast sums spent by taxpayers are as big as the potential for corruption and outright profiteering.

Why is this pattern so pervasive? In a profile of New York’s billions-over-budget transit projects, Politico cited a widely-cited Danish study of global infrastructure projects that observed, “underestimation of costs at the time of decision to build is the rule rather than the exception for transportation infrastructure projects…and we arrive at one of the most basic explanations of lying, and of cost underestimation, that exists: Lying pays off, or at least economic agents believe it does.”

This brings us to the State of the Union and Trump's $1 trillion infrastructure plan. That proposal's outlines, according to numerous statements by him and his staff, would see the federal government contribute $200 billion. The remaining $800 billion would come from locally issued government tax-free bonds and via investors known as public-private partnerships (called P3s).

The first $200 billion would likely come from cuts to other federal programs, The Wall Street Journal has reported. “The rest of the spending would come from cities, states and private investment.” In the Public Interest’s Cohen explained:

“First, it very likely won’t actually be $1 trillion. The administration says they’ll offer up $200 billion in federal funding to, as they put it, ‘leverage’ the rest from other sources. What they really mean is cities, counties, and states will have to make up the $800 billion difference.

“This will make a dire situation even worse, as decades of tax cuts have drained public budgets. One telling example: more than half of all the country’s schools are in desperate need of repairs or modernization, yet 31 states spend less on school construction now than they did before the Great Recession.

“In fact, when all is said and done, there could be a net loss in federal infrastructure spending. Trump’s proposed budget cuts tens of billions of dollars from existing infrastructure programs, and the new GOP tax cut increases the cost to finance infrastructure for states and local governments. That means less new infrastructure and fewer jobs.”

How does it increase taxpayer costs? State and local governments will be urged to partner with Wall Street financiers — pushing public agencies that often lack knowledge of the intricacies of tax-avoidance schemes and user-fee-driven revenue models into deals where investors will be protected and the public won’t.

This scenario starts with Congress repealing environmental laws to speed up the building process.

“We’ve been very clear in all of our discussions that their infrastructure package is not an infrastructure package — it is an environmental deregulation package,” Christy Goldfuss, who was managing director of the Council on Environmental Quality under President Obama and now oversees environmental and energy policy at the Center for American Progress, told the Journal.
Another threat to taxpayers is the steps that Trump and Congress will take to protect investors. That's needed, proponents will argue, because these public-private partnerships are not secure long-term investments.

“The administration hopes to cut lead times to get projects from the planning stage to construction by reducing permitting requirements. That will lessen the political risk that has deterred some private investment,” the Journal reported. “Secondly, it plans to encourage cities and towns to raise fees — like roadway tolls or water-usage charges — that will provide the revenue streams for private-equity investors… It isn’t clear, however, that private investors will swarm to some of the country’s most seriously decrepit infrastructure projects because not all of them will provide commercial returns.”

Even Trump, earlier this month at a meeting with GOP leaders, was skeptical about these partnerships, The Washington Post noted. But his skepticism was purportedly addressed a day later by Gary Cohn, the president’s chief economic adviser and senior Wall Street veteran. “He [Cohn] said the administration hoped $200 billion in new federal government spending would trigger almost $1 trillion in private spending and local and state spending, according to people familiar with his comments,” the Post reported.

If there are huge profits to be made, you can be sure that Wall Street powerhouses will do whatever is necessary to structure such deals and pitch them to local governments. That has been the case for decades, starting in the 1990s when there were tax revolts against new spending, which led to passage of local laws requiring voter approval for projects. What did many local governments do? They partnered with financiers like Smith Barney to structure the financing so it would not trigger taxpayer approval. For example, county offices were financed as rent-to-own schemes; a few years later purchase options were exercised and those costs were added to a localities’ annual debt obligations. (I reported on these schemes as a money-and-politics reporter for NPR.)

Already, right-wing websites are pushing for a resurgence in these kinds of deals under Trump. In a newsletter sent out Monday by libertarian Reason magazine, its transportation editor Robert Poole extolled public-private partnerships. In classic advocacy fashion, he praised a RAND Corporation report that concluded P3s should play a role, but said Congress should do more for investors.

“To begin with, the report reminds us that the large majority of transportation and water infrastructure is owned and largely funded by state and local governments, not the feds,” Poole wrote. “Where federal funding is involved, it should be made conditional on ‘regional sponsors securing matching funds from any combination of public and private sources, including user fees and [user] taxes when appropriate,’” he continued citing RAND. “And while the report stresses the importance of retaining tax-exemption for traditional municipal bonds, it neglects to mention the need to expand current federal tax exemption for Private Activity Bonds (PABs).”

Trump’s infrastructure plan would not just be funded by taking billions from other existing federal programs, and then urging state and local governments expand their use of tax-free government bonds — while charging the public user fees. Backers want infrastructure spending to be made more secure for investors by adding even more tax-free financing options — PABs — to boost annual returns.

While there are many dedicated lawyers and fiscal managers in state and city governments, that’s not the case in every county and municipality with smaller populations. That reality was cited by the Journal when quoting an Obama administration appointee who favors more public-private partnerships.

“I’m a huge supporter of increasing private capital in infrastructure,” Heidi Crebo-Rediker, an adjunct senior fellow at the Council on Foreign Relations who served in the Obama administration, told the paper. “But it is not a silver bullet, and as a country we are not set up to take on a fully private investment in public infrastructure.”

Remember that observation as Democrats react to Trump's infrastructure plan. States and localities are "not set up" to handle a wave of privatization sales pitches. Democrats can draw a line by keeping highways and water systems and everything else public, and paid for it from public funds — including raising taxes to do so.

One way or another the public will end up paying for the needed infrastructure. The only question is will they end up paying more because the GOP wants investors to colonize and profit from what previously was a government function.

Will Democrats say no or cave?