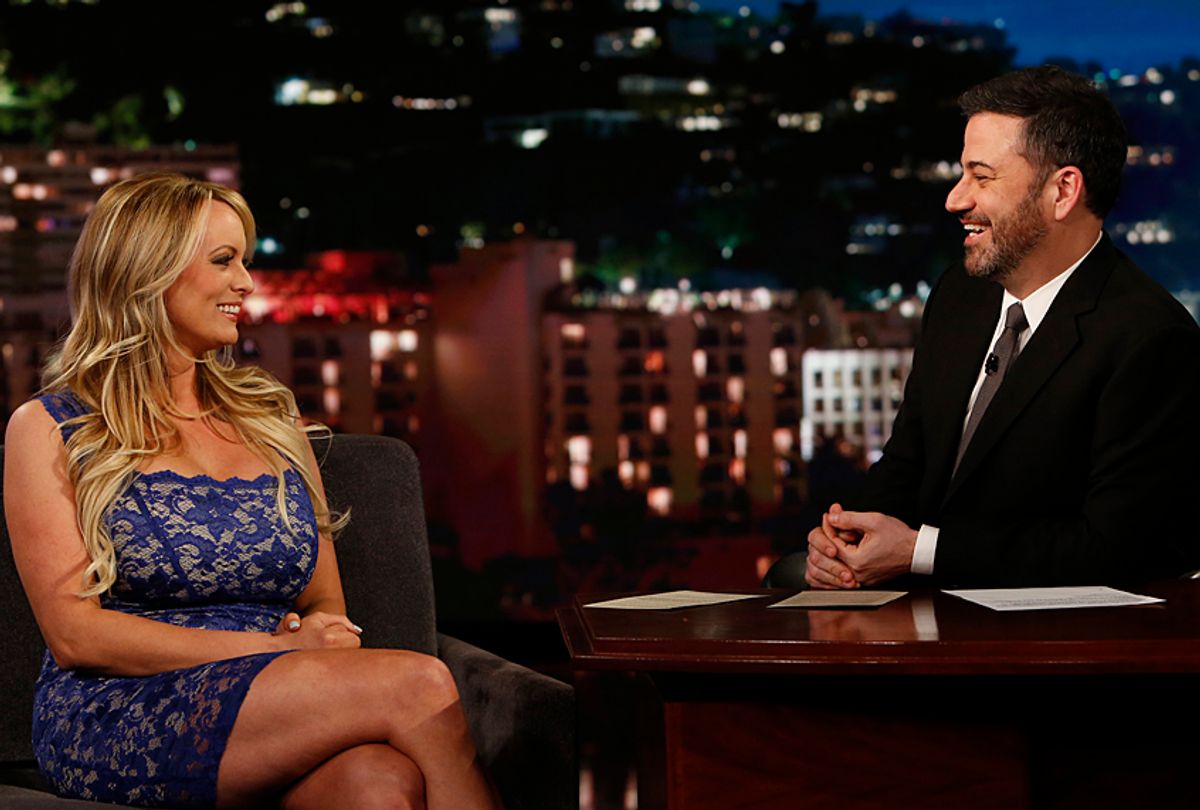 In a cryptic and bizarre interview with late-night comedian Jimmy Kimmel, adult-film actress Stormy Daniels seemed to suggest she was still restricted from talking by a non-disclosure agreement, and hardly answered any questions about her alleged 2006 affair with President Donald Trump.

Hours before her appearance on "Jimmy Kimmel Live!" a statement released in Daniels's name and with her signature appeared to deny that the affair had ever occurred. "The fact of the matter is that each party to this alleged affair denied its existence in 2006, 2011, 2016, 2017 and now again in 2018," the statement said. "I am not denying the affair because I was paid ‘hush money’ as has been reported in overseas owned tabloids. I am denying this affair because it never happened."

It concluded, "I will have no further comment on this matter."

But when she sat down with Kimmel, the late-night comedian presented older pictures she had signed and stood them next to the statement released just hours before her appearance. There seemed to be some noticeable differences, and Daniels provided cryptic non-answers to Kimmel's question about signing the agreement, such as, "I don’t know, did I?"

"It doesn’t look like my signature, does it?" she said after Kimmel asked if it was her signature.

The authenticity of the signature, however, has since been confirmed by The Washington Post, citing Daniels's representative, Gina Rodriguez, who said the pornographic actress signed the agreement that afternoon in front of her and her lawyers.

Despite that, Daniels gave non-answers when Kimmel asked if there was a non-disclosure agreement, suggesting that one in fact exists.

"Do I?" she answered, when asked if one existed.

Kimmel noted that she would be able to say that she didn't have an agreement, if there wasn't actually one in place.

"You’re so smart, Jimmy" she told him.

Kimmel continued to press her on questions in the form of various skits that included two puppets that resembled Daniels and Trump. One gag also included Daniels choosing from three different-sized carrots, after Kimmel ran the clip of Trump bragging about his hand size during a Republican presidential debate, and assuring that there were no other problems.

Daniels also seemed to deny at least some portions of the 2011 transcript released by InTouch magazine, in which she alleged in detail how the affair between her and Trump occurred.

When asked if it was accurate, Daniels said "not as it is written," but she then said she hadn't read the entire thing because she was "too scared to look at it."

The alleged affair has taken a toll on the Trump presidency and reportedly infuriated his wife, first lady Melania Trump, who also broke with precedent and traveled separately from Trump to his State of the Union address on Tuesday night.