The Multiple Lives of J.K. Simmons 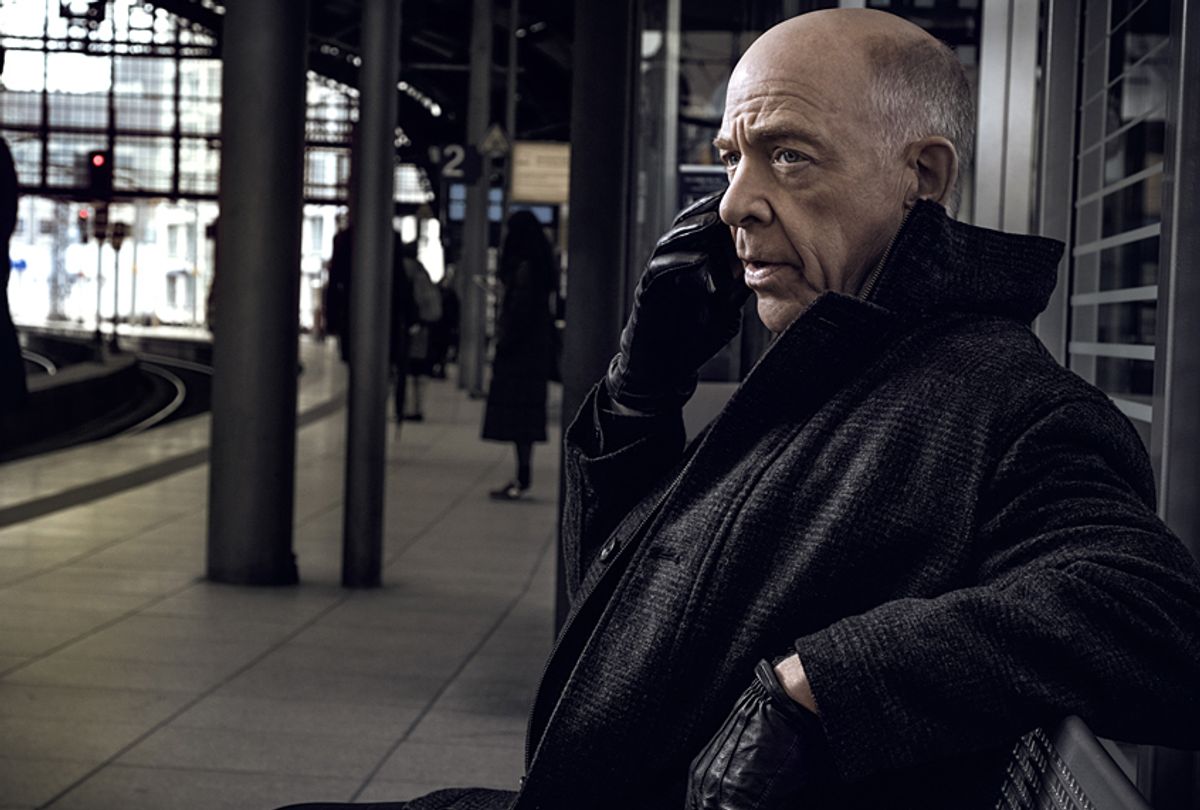 You may find it hard to believe this, but aside from a mercifully brief stint as an overwhelmed temp, “Counterpart” star J.K. Simmons has never worked in an office. “Oh god, I'm glad nobody has film of that,” he told Salon recently.

This is a rare and somewhat odd gap in the résumé of a man who has played an extensive range of roles, lending his talents to everything from animated series aimed at children to Tom Fontana’s celebrated HBO drama “Oz,” which spun a tapestry of violence cruel enough to force the hardiest of viewers to tap out.

For a man who has played all kinds of roles, “Counterpart” may prove to be one of his most challenging projects because he’s playing two versions of the same person, at the same time. Not only that, it places him inside the life of, yes, an office drone.

Simmons’ Howard Silk amounts to more than this — twice as much, in fact. In the show’s chilly Berlin setting, Silk is a bureaucrat whose job entails completing a set task each day that isn’t just boring, it makes no discernible sense. But he soon finds out that the world doesn’t make sense, largely because there are two versions of it, the result of a Cold War event gone wrong.

These parallel existences mean that every person has a duplicate, although the government strains mightily to keep that under wraps. Howard’s happens to be a spy assigned to a mission to capture a killer who has found a way to cross between these existences.

Dual roles aren’t unique — especially in recent seasons — or relegated to science fiction. Think James Franco playing the role of brothers on “The Deuce,” or Ewan McGregor pulling off a similar job on the third season of “Fargo.”

“Counterpart,” currently airing Sundays at 8 p.m. on Starz, creates a different challenge for Simmons in that the actor must play one man two different ways. In the drama’s universe, they share the same upbringing and the same memories until the split forced one to take a part the other probably did not consider. And Simmons manifests this with delicate changes between one personality and another. The smallest change in posture gives Howard Silk the bureaucrat the torso of a sedentary working stiff, which is apparent as he stands across from Howard Silk, government agent.

And, as Simmons recalled, two versions of one person in a number of scenes made this role a little more daunting than others.

“I was going to say there were no days off of work,” he said, “but every once in a while those days where all I had to do was, ‘You're just walking from here to there, and now you're walking from there to here’ turned into, ‘but you're this dude, and you've experienced this, this, this, and this, which we haven't shot yet. And you're pretending to be the other dude.’"

He jokingly added, “I kept thinking of the line from Robert Downey Jr. in ‘Tropic Thunder’: ‘I'm the dude dressed as a dude, pretending to be that other dude.’ That was the guy I felt like sometimes, yeah.”

In the real world, if Simmons seems like he’s everywhere, that’s because he kind of is. Simmons takes the term “working actor” seriously to a degree that’s beyond impressive, continuing to rack up voice work credits even while he’s in demand as a film actor and TV star.

Spend an hour watching TV, and it is possible to see him as the spokesperson for Farmers Insurance company, hear him voicing the part of the yellow M&M (yes, that’s him) and, possibly, popping other animated roles within the same stretch.

Simmons got his first Hollywood break relatively late, at the age of 39, when he landed a part in the Denis Leary vehicle “The Ref.” Cutting his teeth on stage in the early years of his career provided a basis for dramatic versatility that has served him incredibly well ever since.

His wide-ranging adaptability as a performer enabled Simmons to move past being associated with one of the most terrifying characters on television, the white supremacist leader Vern Schillinger on HBO’s “Oz.” Schillinger was Simmons’ first regular series role, and the viciousness the actor poured into the part made Schillinger tough to forget. Fortunately it didn’t typecast him. During the run of “Oz” Simmons appeared in the “Law & Order” franchise as Dr. Emil Skoda, a psychiatrist working with the police department.

He also went on to play J. Jonah Jameson in Sam Raimi’s “Spider-Man” in addition to extensive work in TV, including on series such as “The Closer,” before landing the role of a cruel, hard-driving instructor in the Oscar- and Golden Globe-winning 2014 film “Whiplash,” the part that would earn him an Academy Award for Best Supporting Actor.

“That's a blessing that I've had, really my whole career since I was doing theater 40 years ago, is I've had opportunities to play many different kinds of characters,” he said. In this, to be able to play different kinds of characters on the same show, on the same day, in the same scene sometimes, it's like a nice workout where you're . . . I don't know . . . you get in your cardio and your weight lifting at the same time.”