The night Jimi Hendrix plugged into the UK scene

In 1966 a "slightly gawky, unknown left-hander" had the nerve to step onstage with Cream 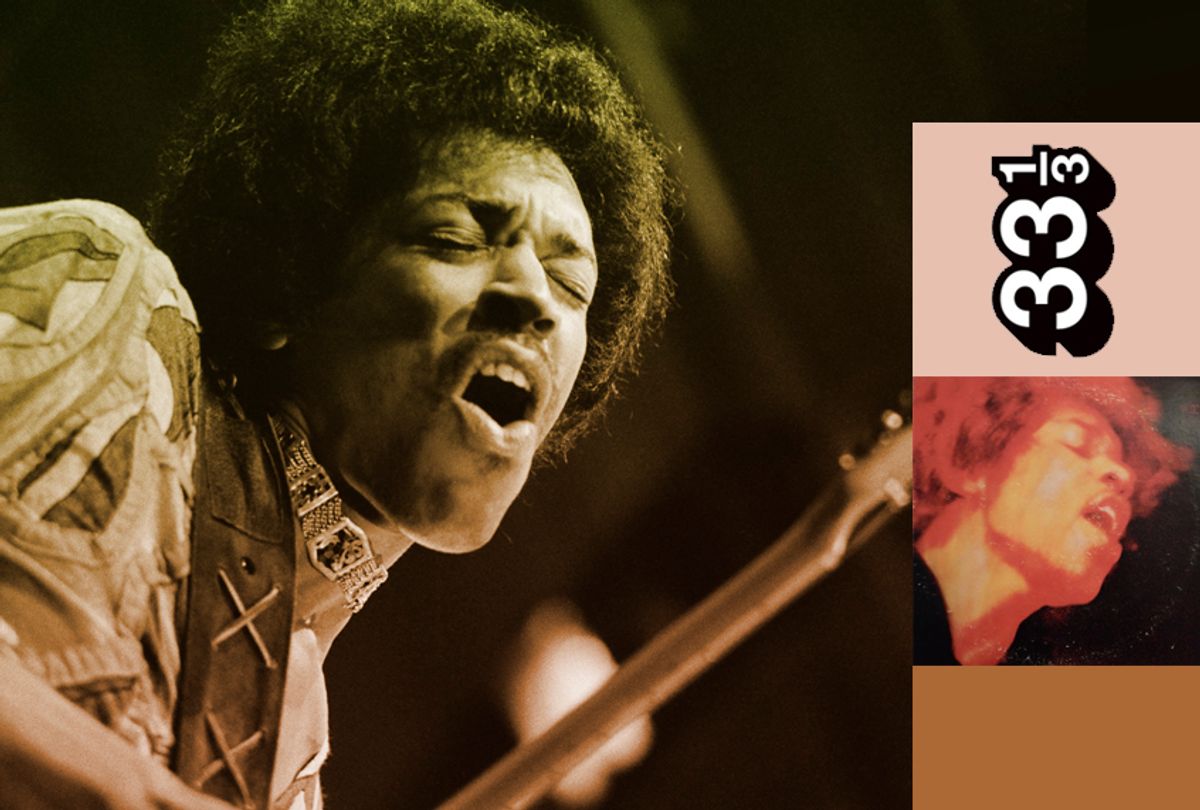 Two of London’s reigning guitar heroes, Townshend and Clapton, were tipped off by a third, Jeff Beck, that a new man was in town. After seeing Jimi at Blaises club, Townshend felt that some of his trademark guitar tricks had been nicked. Meanwhile, Clapton was sufficiently alarmed that he called Townshend, not previously a close friend, to an emergency meeting. Together they went to the cinema where they sat and tried to figure out how best to deal with this new menace. We don’t know what film they saw, but we do know they decided to make Hendrix welcome—although it’s hard to imagine what else they could have done. Run him out of town? Called an unofficial strike? Cast spells?

Jealousy wasn’t restricted to guitar players alone. It’s amusing to watch Mick Jagger in Joe Boyd’s 1973 film "Jimi Hendrix" claiming, in preposterous Belgravia Cockney accents, to have loved and supported Hendrix. In fact, Jimi’s unsubtle play for Marianne Faithfull, acted out before everyone at the Speakeasy (not to mention Marianne’s own approval of Jimi), started a Jagger/Hendrix feud which only ended with Jimi’s death.

The American R&B world, segregated from white society, may have been highly stylised but the English rock scene was a social system as rigidly stratified as every other area of English life: a hierarchy in which everyone knew their place and, more often than not, stayed in it. The Beatles and The Stones ruled the pop world, but in 1966 the newly emerging Rock world belonged to those perceived as virtuoso musicians. To the top of this scene floated Cream. It is hard to imagine today the degree of awe in which Cream were held. Nobody got onstage with them (nobody was foolish enough). So when, on October 1, 1966, at the London Poly, a slightly gawky, unknown left-hander appeared among the Trinity the audience thought they were about to witness a ritual humiliation. Some dumb American who didn’t know the form. Ginger Baker scowled. Clapton discreetly barred the way to his Marshall amp, so Hendrix plugged into Jack Bruce’s bass amp. Within thirty seconds of “Killin’ Floor” Clapton’s jaw dropped, and the hierarchy of the English rock world experienced a profound shift.

That part of the story is well known: less documented are Hendrix’s intentions that night. The more one inquires, the more it seems likely that he approached the show in the spirit of a pre-war Kansas City cutting session. (Given Hendrix’s abilities and the parochial nature of English rock, who wouldn’t?)

Chas Chandler’s mate, Keith Altham, interviewed Jimi the afternoon before the show. Always an astute observer, he was quick to notice a sharper side of Jimi’s temperament, one that corresponded to neither of the stereotypes reported by the press. Popular journalism dislikes paradox, preferring plain, easily digestible “facts” and characters free of annoying ambiguity. So Jimi was presented as a rampant “Wildman of Borneo”—unless a journalist happened to meet him, in which case the angle altered to mild shock at the discrepancy between the “savage” onstage and the “gentle, shy” man backstage.

As both journalist and PR man, Altham knew how to play up Fleet Street expectations to his clients’ best advantage but he was too bright to believe the stories he sold. He knew Hendrix as an altogether more complex personality and it amused him to see how Jimi’s sly, street-smart wit was too quick, its delivery too throwaway, to register with most English hacks:

[his] waspish responses were often lost on journalists who missed the softly spoken retorts as his incredibly long fingers fluttered nervously and he tailed off with ‘etcetera etcetera’ . . .

In a piece written as a posthumous letter to Hendrix, Altham later wrote:

One of your best one-liners occurred prior to your being invited to jam with your great rival Eric Clapton and Cream . . . I asked you how you rated him, you said: ‘He is a kinda hero of mine except I don’t really have heroes. But I can’t wait to find out if he is as good as he really thinks I am’. You looked slyly out of your manager’s window in Gerrard St.

So, as Jimi looked out on Gerrard St., what other guitarists might he have had in mind? Who were the Big Beasts of the English Blues jungle, and how did they rate?

Clapton, when I first saw him mid-’66, gave the most sustained display of virtuoso guitar playing I’d yet seen. Cream, especially in the days when they still spoke to one another, were truly something to see. In America—and especially on the West Coast—they were hugely influential. Jerry Garcia told me that he, and the other San Francisco bands, had never conceived that so much power could be focused through the format of a blues-based three-piece band. He called it “a revelation”.

Jeff Beck was always the quirkiest and least predictable of players. Still is. And he can claim to have had some influence on Hendrix; we know that Jimi studied his Yardbirds records closely, especially Beck’s use of feedback, a phenomenon which up till then, in Mick Green’s words, was “just something you wanted to get rid of, especially with semi-acoustic (electric) guitars”.

Once in England, Jimi also drew a lot from Pete Townshend, specifically his stage demeanour and the way he used gesture. For Townshend, who considered himself limited in technical ability, the way to convey power onstage was to scale up his movements till they were larger than life. That’s how he sees it: I’d say that as a guitarist/writer he played to his strengths. Using simplicity and directness he made half a dozen magnificent singles, and invented a visual language that complemented them so successfully it’s still copied to this day. Strangely, Pete, essentially a rhythm guitarist/songwriter who didn’t traffic in blues guitar at all, had the most in common with Jimi. Both were self-taught players who developed their own particular line further than any of their peers.

Of all the English players, Peter Green seemed the least intimidated by Hendrix. Green—in BB King’s words the “sweetest sounding” and “best” of the white bluesmen—sounds to me to have had some classical training (or else knew a bit about Spanish guitar). Jimi’s polyphonic style would have been less of a mystery to him than to some of the others. Let me explain “polyphonic”. The English lead guitarists tended to play long lines of single notes: monophony. Jimi could do that as easily as anyone else but, as classical guitarists do, he could play an accompaniment and a melody at once (what’s often and inadequately referred to as his “mixing rhythm and lead together”): that’s polyphony.

The best example of monophony was Clapton, who, as Hendrix quickly spotted, wasn’t a rhythm guitarist at all. Jimi, by contrast, had learned the ins and outs of the less glamorous rhythm guitar role during his formative days touring with R&B acts. The bandleaders on the soul circuit didn’t want any flash lead: just clear, sharp rhythm guitar. Jimi always spoke about “escaping” those confines but in fact R&B and Soul Review disciplines were the making of him.

John Perry is an English musician and author. A founding member of the Only Ones, he has played with Robert Palmer, Robert Hunter, Evan Dando, The Sisters of Mercy, Marianne Faithfull, Michael Nyman and Johnny Thunders.