Could a "bipartisan" new group sabotage the push for single-payer?

A murky bipartisan coalition promises "health care over politics." Is its real agenda to stop "Medicare for all"? 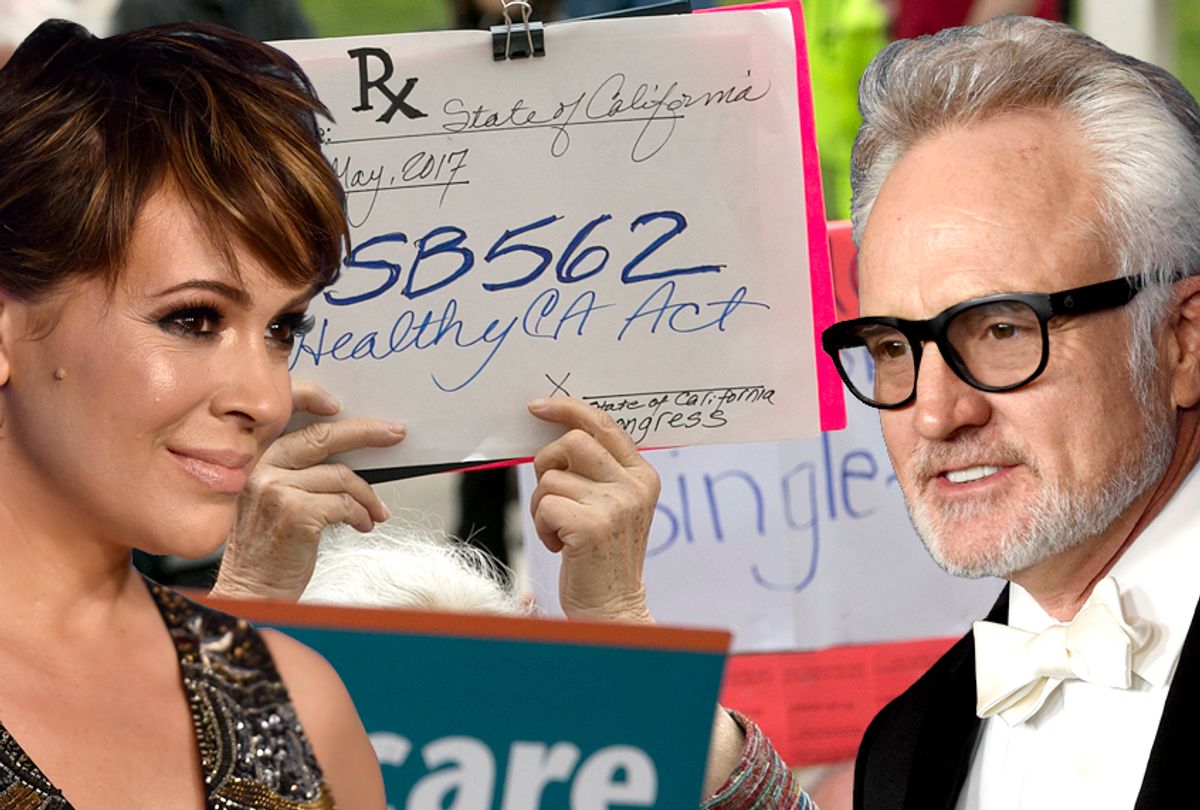 Just days after corporate giants Amazon, Berkshire Hathaway and JPMorgan revealed their plans to “disrupt” the health care market, fearful that America’s private insurance model is strangling the economy, a leading defender of the Affordable Care Act announced the launch of a new bipartisan group that aims to reform the system — but not by too much.

Self-described as “a new movement” to ensure “that no American should have to go without the care they need,” the United States of Care had a slightly mysterious rollout in Washington on Tuesday. Led by Andy Slavitt, who served as acting administrator of the Centers for Medicare and Medicaid Services under the Obama administration, United States of Care lists prominent liberal-leaning celebrities like Mark Cuban, Andy Richter and Bradley Whitford alongside former Republican lawmakers and conservative policy wonks. Former astronaut Mark Kelly and former Kentucky Gov. Steve Beshear, a Democrat, have signed up, as have health care executives from Kaiser Permanente, BlueCross BlueShield and Trinity.

Full of familiar (i.e., stale) political jargon about “common sense solutions” but notably lacking in specifics, United States of Care ostensibly aims to ensure the gains in insurance coverage under the Affordable Care Act while continuing to promote the private market. It’s hard to tell for certain, however, as the group has declined to commit to any policy prescription, offering just three shared (and redundant) principles:

We believe all Americans should have access to a regular source of care for themselves and their families; no one should face financial devastation due to illness or injury, and  we need to achieve these goals through policies that are fiscally responsible and have the political support to last.

Slavitt has recruited a deep roster of Republicans known for their opposition to the Affordable Care Act, including former Senate Majority Leader Bill Frist and Douglas Holtz-Eakin, once an adviser to Sen. John McCain.

Holtz-Eakin and Frist are no allies of Democrats on the health care issue. Just last year, Holtz-Eakin's group ran ads thanking House Republicans for voting to repeal the ACA. Republican Lanhee Chen, a former advisor to Mitt Romney’s 2012 campaign who has also joined Slavitt’s group, previously praised the Senate's Graham-Cassidy bill, which would have would rolled back the ACA’s Medicaid expansion, as an ideal health insurance model.

Another troubling sign is that United States of Care won’t disclose who its donors or funders may be, but told Bloomberg that “it won’t take money from partisan groups or for-profit companies.”

So why are seemingly sensible Democrats joining with the very people intent on destroying the little progress made on healthcare in this country? Here is the argument, as articulated by former Obama speechwriter-turned-popular podcaster Jon Favreau, also part of United States of Care, in less than 170 characters:

Most health care advocates would agree that fighting to preserve “access” to “affordable” care is not enough, and it's not realistic to believe that a pathway to "Medicare for all" can be paved with Republican help. Medical costs were the largest single contributor in increasing the number of people who fell into poverty over the last decade, according to a Kaiser Family Health study.

But in the futile hope of reaching some “bipartisan consensus” on health care, United States of Care is already refusing to consider the single-payer option, the one policy proposal that could actually guarantee the group's purported objective of affordable health care for every American.

United States of Care will "avoid using language like universal coverage that is polarizing,” Slavitt told Modern Healthcare this week, saying, “We want to bring people together, and certain words are used by one party or another to create divides."

Single-payer is hardly a radical proposition at this point, yet United States of Care has already signaled that it hopes to sabotage any political momentum for the idea. From a Bloomberg News profile:

The organization is trying to prepare for an eventual opening for bipartisan policy making, while heading off increasingly volatile swings in health policy when political fortunes shift in Washington. Already, potential Democratic contenders for the 2020 presidential election are signing on to Senator Bernie Sanders’ ‘Medicare for All’ bill, which has more than a dozen co-sponsors in the Senate.

A majority of Americans supported single-payer in a fall 2017 poll. In a Pew Research poll last July, 60 percent of respondents agreed that it was "the federal government’s responsibility to make sure all Americans have health care coverage."

Previewing his plans to "unite America on health care" in an August 2017 interview with he New York Times Magazine, Slavitt seemed to understand that the public consensus on the issue is seriously out-of-whack with the standard conservative position held by former Republican lawmakers and think-tank intellectuals alike:

It’s hard for Republicans to figure out how to dramatically change this solution, since it’s something that’s fairly right of center. It’s free-­market driven, so a lot of things they come back with just sound like chintzier versions of the A.C.A. But now, Americans of all political stripes are getting exposed to both how challenging this is and how many layers of complexity the private-­sector solutions bring to this. There is a strong sentiment — even if it’s not a political one — to just simplify it.

There is nothing wrong with a state-based model to circumvent the boondoggle that is the federal government these days. Just ask nurses, a group of health care providers notably absent from the United States of Care board. In California, where premiums on plans made available through the ACA exchanges are expected to increase by 30 percent in 2019, the California Nurses Association is backing a state bill for a single-payer health care system that would achieve universal coverage.

Despite the group's tagline, there is no disentangling politics and health care in America. Republicans in Congress had zero qualms about withholding funding for the Children’s Health Insurance Program, which covers 9 million kids, for months – despite polling in November that found extending that funding was the American public’s top legislative priority. Trying to satisfy so-called deficit hawks who cheered as a unified Republican government passed a trillion-dollar tax cuts, continuing the long-term trend of Republican presidents blowing a hole in the federal deficit, is foolish. The fiscally responsible solution and the humane solution are the same: single-payer health care.

On this, Slavitt could also listen to his onetime partner Alyssa Milano, who teamed up with the former Obama administration official to promote ACA sign-ups last year in the face of Republican opposition. Writing recently for Time, the actress pledged to make health care her top voting priority in 2018: “Time and again, Americans have resoundingly rejected the Republican approach to health care.”

Instead of joining forces with Republicans to appease a nonexistent middle ground in hopes of putting “health care over politics” -- and no doubt preserving profits for insurance companies, hospitals and Big Pharma --Democrats and supporters of the ACA would be better served by leaning directly into the politics of health care. Poll after poll shows that the public is with the progressive base on this issue: Health care for all must come before politics as usual, and before corporate profits.