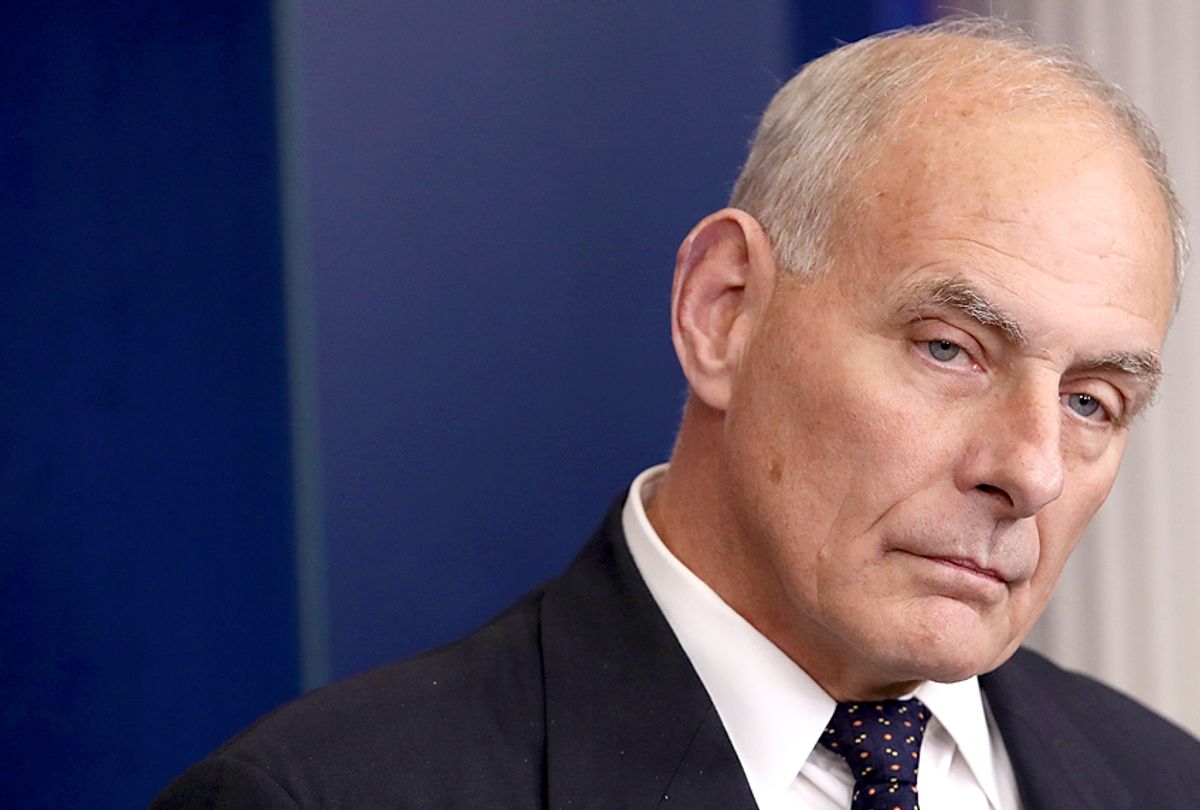 It certainly sounds like the White House's sole defense of John Kelly's actions, protecting his top aide, relies on feigning ignorance. President Trump's chief of staff, the White House said on Thursday, lacked the necessary photographic evidence of abuse to fire Rob Porter so he allowed the now-former aide to stay in his job without a security clearance for over one year.

White House spokesman Raj Shah said Chief of Staff Kelly didn’t fire — or refrain to hire — Rob Porter, even though the White House allegedly knew about the domestic abuse allegations he was facing from two ex-wives, because he was "not fully aware" of allegations against Porter until photos of his abused ex-wife surfaced.  It turns out Kelly needed photographs because verbal allegations — and an emergency protective order against Porter in 2010 by his second ex-wife — wasn’t enough to raise eyebrows.

At the Feb. 8 White House press briefing, Shah told reporters: “I do know John Kelly hadn’t seen images prior to the statement.” Shah added that Kelly didn’t become “fully aware” of the allegations until yesterday — suggesting "full awareness" was predicated on photographic evidence.

While Shah refused to get into “specifics,” according to Politico, Kelly indeed knew at least about the protective order. Both of Porter's ex-wives had also spoken to the FBI.

Porter, the now-former Trump aide, announced his resignation on Wednesday and released a statement denying the allegations, first reported by the Daily Mail, that he violently abused his first wife, Colbie Holderness, and his second wife, Jennifer Willoughby. Other outlets corroborated the Daily Mail’s original reporting, and disturbing photos emerged that led to Porter’s resignation. Willoughby wrote a blog post in April 2017 providing more details on her abusive relationship:

The first time he called me a "fucking bitch" was on our honeymoon. (I found out years later he had kicked his first wife on theirs.) A month later he physically prevented me from leaving the house. Less than two months after that, I filed a protective order with the police because he punched in the glass on our front door while I was locked inside. We bought a house to make up for it. Just after our one year anniversary, he pulled me, naked and dripping, from the shower to yell at me

Porter's second wife told CNN's Anderson Cooper on Thursday that Porter tried to get her to soften her story days before the photos of Holderness surfaced this week.

After the first public reports of abuse, but before the graphic photos were released, Kelly praised Porter, releasing a statement on Tuesday commending his character. in it, Kelly said Porter was “a man of true integrity and honor and I can’t say enough good things about him." The statement continued: "He is a friend, a confidante, and a trusted professional. I am proud to serve alongside him.”

During the press conference, Shah repeated that Porter had denied the allegations long before they surfaced this week.

"It is important to remember that Rob Porter has repeatedly denied these allegations and done so publicly. That doesn't change how serious and disturbing these allegations are. They are upsetting," Shah said. "The investigation does not stop when allegations come to light, it continues to determine the truth."

"We should not short circuit an investigation just because allegations are made unless they compromise national security or interfere with operations of the White House," Shah said. "The truth must be determined.” Shah explained that Porter’s background check was ongoing.

Shah confirmed that when a White House official is staffed under an interim security clearance, that official is still allowed to touch and see classified materials.

That said, Shah's words seem to hint that Kelly, and perhaps other staffers too, knew of Porter’s violent past, but didn’t take the allegations seriously — despite what Shah claims.

“We all could have done better,” Shah said at the podium on Thursday, although it’s unclear exactly what he was talking about — Kelly's statements, or hiring Porter from the start?

White House Counsel Donald McGahn knew one year ago that Porter’s ex-wives were prepared to make damaging accusations about him but allowed him to serve as an influential gatekeeper and aide to Trump without investigating the accusations, The Washington Post reported.

As to what Donald Trump knew about Porter, Shah said the president didn’t know about Porter’s interim security clearance, and that he was only informed about the allegations after the reports surfaced.

“He was saddened about it, and saddened by all individuals involved,” Shah said.

According to reports, however, Trump is frothing with anger.

“Who does this guy think he is?” Trump said of Kelly, according to the friend who spoke with Axios. The New York Times reported that "Trump has recently asked advisers what they think of Mick Mulvaney, who currently holds twin posts as director of the White House budget office and the Consumer Financial Protection Bureau, as a possible chief of staff."