"Strike Back" brings women into the action 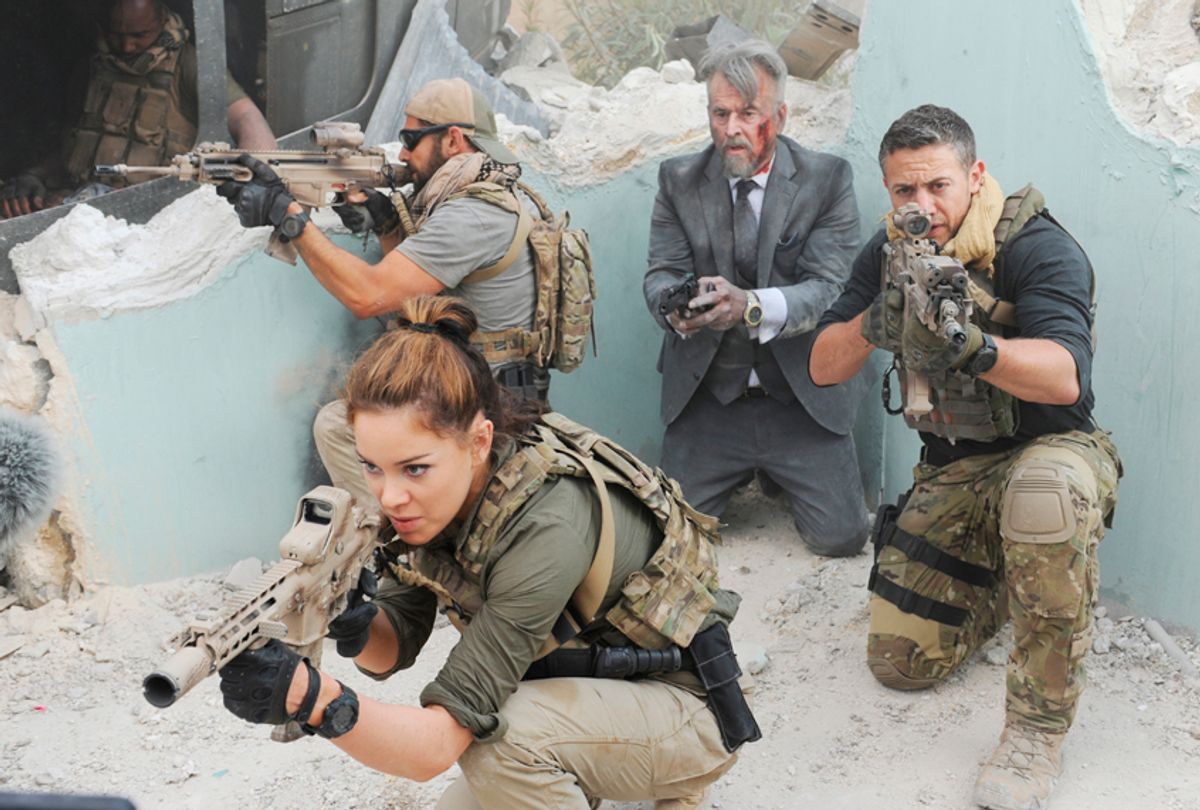 “Strike Back,” Cinemax’s long-running military action ripper, is unlike most series.

Generally, shows returning to the air after an extended hiatus contend with a portion of doubt among the faithful, especially if those fans are conditioned to associate them with a specific dynamic.

And “Strike Back” has a definite formula. Its current incarnation represents the drama’s sixth season overall, and fifth as a Cinemax entity, and features an entirely new cast. A certain amount of resupplying a show’s roster is to be expected of a series about a covert special operations force. Soldiers can’t outrun bullets and fire forever, and the actors playing them eventually move on.

But where “Strike Back” found success in previous seasons was in capitalizing upon the buddy action partnership of Sergeant Michael Stonebridge (Philip Winchester) and former Delta Force operative Damien Scott (Sullivan Stapleton), a relatively staid British specialist (played by an American actor) partnered with a wild-man American (played by an Aussie).

Though Stonebridge and Scott weren’t the original “Strike Back” duo, the pair personified show’s engine: two guys linked in a platonic work marriage requiring them to blow stuff up and kick international criminals and terrorists in the face. Think Jason Bourne, minus the brainwashing and refinement but with added humor, scruff and random sex scenes.

And it’s Reynolds, not McAllister or Wyatt, who is the ranking agent leading the team into places where the regular British and American armies will not tread. In contrast to White House policy, Section 20 views far-right white nationalists as equal threat to other extremists; with the first two episodes the action sprints from confronting a terrorist cell in Libya (actually Jordan; apparently the king is a big fan of the show) to chasing down far-right extremists in Europe.

Two episodes of the new 10-part season have made their U.S. debut on Cinemax, where it airs Fridays at 10 p.m., and thus far the new “Strike Back” feels very much like it always has. This is as much of a testament to the appeal of the new cast as the series’ resilient structure.

“Section 20, the ‘Strike Back’ concept is something which is kind of universal,” executive producer and director MJ Bassett told Salon in a recent interview. “The soldiers come and go, but the ambitions of what both the show and those characters within the show want to do remains ultimately the same."

“This show wants to be an entertainment,” Bassett continued. “It fills a gap in the television world which nothing else exists within. When we went [away], I expected to see another kick-ass military show come along and nothing did. They're all a little bit serious.”

Bassett’s focus has always been to ensure that the show feels like a “wild ride” first and foremost. It’s also a series with plot arcs extending through entire seasons with unpredictable twists, and narratives spurred along by a do-or-die mission as opposed to poetic dialogue or character backstory.

Episodic tension is derived from speeding from one deadly confrontation to another, in a series of near-miss pursuits of villains bent on destabilizing nations that sends the team to far-flung locales around the globe. Production for this season took place in Jordan, Croatia and Hungary, for example.

That said, the frequently FUBAR nature of Section 20’s missions enables viewers to invest in the characters. As such, one may notice that there’s room for improvement in terms of finding parity with the personality portraits of the men and the women, especially in this season’s opening episodes.

When this was pointed out to Sumarwata and McKee, Sumarwata theorized, “It does probably play that way at first when you watch it, I think, maybe because they were trying to stay true to the genre of the show.”

In terms of the dialogue, “I'd always fight for it. I'd be like, it should just be written like we’re men. Or, not men, like we’re soldiers. In the beginning there was always kind of this thing about guys, all the banter, and we always had to fight to get more,” she said, adding ,“I think they will keep working at that, but it's a great start to even have two female leads. And incredibly timely, especially now, what with everything that's happening.”

To this McKee quipped, “#TimesUp.”

Incorporating women into the field operations isn’t new to “Strike Back,” which previously added Rhona Mitra’s prickly Rachel Dalton to the Stonebridge and Scott outfit in one of its best seasons. Female commanders also are common in Section 20, with Nina Sosanya commanding missions as Colonel Adeena Donovan.

“What MJ wanted to achieve,” McKee explained, “was less of the sexual nature between the soldiers and more of the understanding of getting the job done as soldiers working together within a unit, rather than just being humans who are maybe having a flirtation, or emotional investment in each other at the beginning because we wanted to show that they're soldiers with a job to do.”

Bassett added, “The world has moved on a little bit in terms of machismo, in terms of the mix of men and women who serve in the military, and who they are represented on television. I believe in diversity massively and it's that sense of, how can we reflect this new world, keep the flavor of the old of the show and infuse it with something new and exciting so it doesn't feel like it's a dinosaur show?”

In many ways “Strike Back” stands as the quintessential Cinemax series, the bridge between the channel’s former brand as a repository of B-movies and soft-core to its current state as an action-centric premium channel that isn’t shy about busting out the skin flicks for night owls.

What makes the series stand out from other network originals, though, is that the action felt intricately choreographed and the missions embarked upon by special operations group Section 20 looked real and were staged in a way that allowed the military expert consultants’ work to glow through the actors. Basically, it’s a weekly action flick cast with an impressive roster of talent, starting with Richard Armitage and Andrew Lincoln in the first season, when it first aired in the U.K. before being re-branded for American audiences as “Strike Back: Origins,” and followed by the partnership between Stonebridge and Scott, the version American audiences are most familiar with.

Simmering beneath their run-and-gun bravura all the while was a darkness informed by battle trauma and personal tragedy. This brings us to an aspect of “Strike Back” that probably irked its female fans more than the men watching with them — in previous seasons, female characters often had an expiration date and thinner character development.

Bassett concedes that the series gained that reputation. “But this time around, I wanted to make sure that it was a much more level playing field. Their gender is not really relevant anymore. They are just operators. And because we've gone to four principals rather than two, now it makes no difference. It's just whatever the mission dictates and needs, is we're assigning them. The dynamic changes, and we avowedly said the previous incarnation was a buddy show, this is more of a group show. This is more building a family unit, in that looser sense of family, that kind of interaction.”

It is a jump for viewers, Sumarwata conceded, to take a series built around two men and add a pair of female soldiers beside them. That said, “I felt like it could've been pushed even more to have the two females being front and center with all the banter right from the beginning. But it’s OK. I still give them props for even having us on the show!”

She added, “Hopefully by the end of the season you don't go, ‘oh, that's a female soldier.’ You just say, ‘That's a soldier.’”