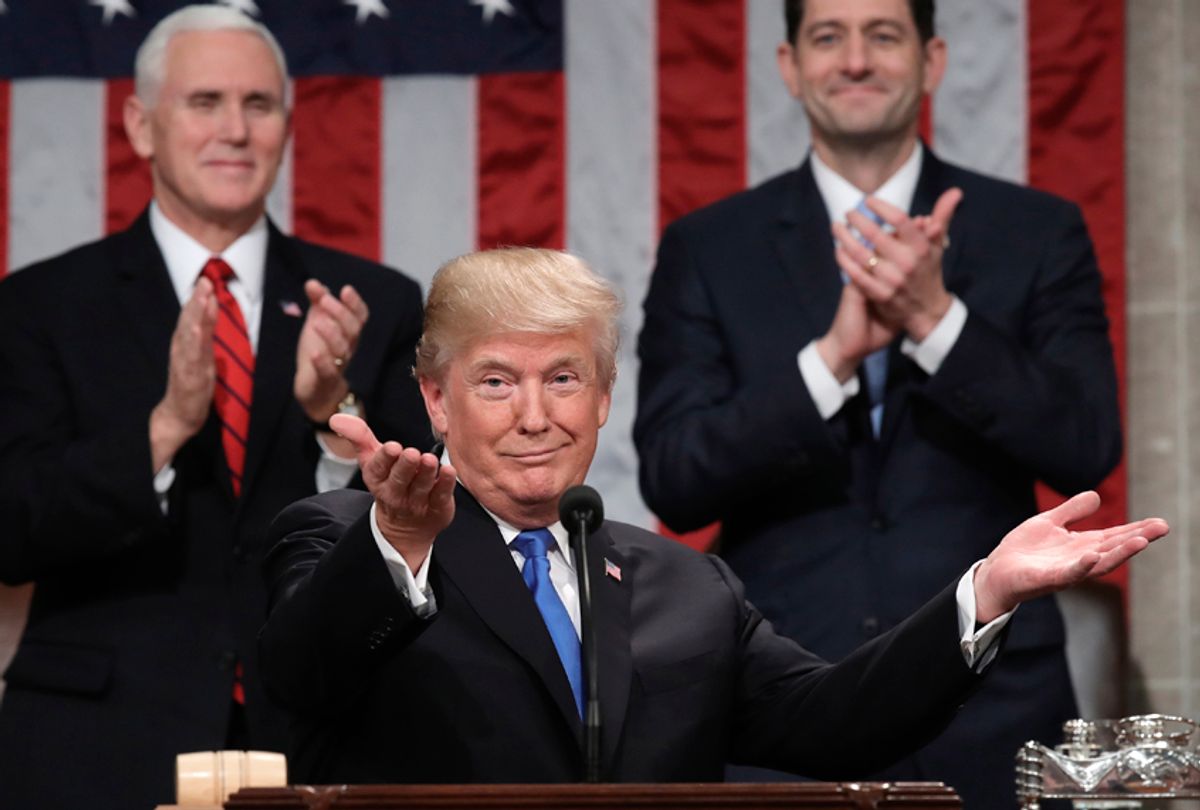 In his first official State of the Union address to Congress on Tuesday, President Trump boasted about a “new tide of optimism” that “was already sweeping across our land” when he was elected. One of the successes that he was eager to claim is adding more jobs to the economy.

“Since the election we have created 2.4 million new jobs, including 200,000 new jobs in manufacturing alone,” he bragged. “Tremendous numbers.”

Later on, he claimed credit for companies “building and expanding plants” in this country, “something we haven’t seen for decades.”

“This is all news Americans are unaccustomed to hearing,” he added. “For many years, companies and jobs were only leaving us. But now they are roaring back, they’re coming back, they want to be where the action is, they want to be in the United States of America.” Apparently, his very presence in the Oval Office is to thank.

But while Trump has overseen steady job growth, it has by no means been record-breaking. It’s hard to see how Trump could take credit for jobs added to the economy before he laid foot in the White House, so it’s more accurate to say that the economy added 2.1 million jobs over the course of 2017, according to data from the Bureau of Labor Statistics. Even so, in President Obama’s last year in office the economy saw the creation of 2.2 million jobs. In fact, 2017 represented the lowest level of job growth in seven years.

It’s also not clear that Trump could be credited with helping create many of these new jobs anyway. So far, his major policy achievement has been signing the Republican tax bill into law at the end of December 2017, what he dubiously called during his speech “the biggest tax cuts and reforms in American history.” While Republicans argue that the money saved by large corporations will be used to make investments in their workforces through creating jobs and raising pay, it’s far too early to find out whether that will actually happen. Instead, many economists expect corporate executives to use the savings to reward themselves and their shareholders. A number of companies have already said as much about their plans.

Trump has repeatedly boasted of creating or saving millions of jobs single-handedly by cajoling corporate executives or striking deals with them. In late 2016, before he took office, Trump flew to Indianapolis, Ind. to visit a Carrier plant that was planning to move jobs to Mexico. Trump and Vice President Mike Pence, the former governor of Indiana, promised the company millions in state tax breaks along with fewer federal regulations and taxes. In celebrating the “deal,” Trump and Pence bragged that they had saved American jobs at the factory from being moved overseas.

But hundreds of workers at that plant did, in fact, lose their jobs. Only 730 Carrier jobs were preserved in the plant where Trump did his photo op, while about 1,250 were lost. The last employees to be hit by the layoffs clocked in for their final shifts just two-and-a-half weeks ago.

“We were hoping someone would intervene, but apparently it never happened,” Duane Oreskovic, one of the last Carrier employees to lose his job, previously told In These Times. Frank Staples, another Carrier worker who recently lost his job, put it this way: “I would say to Trump, ‘You made a decision and ran on a campaign promise that you were going to help the American worker. Stand up and do it.’ ”

Trump has made repeated promises about job creation, but most of those pledges have similarly vanished into thin air over his first year in office. ProPublica recently found that while Trump has claimed to have saved or created nearly 2.4 million positions, only 206,000 — or less than 9 percent of what he’s tried to take credit for — have actually materialized. Just 136,000 of those were brand new jobs, not just warmed over press releases about jobs that had been previously planned. In total, ProPublica found that Trump could only be directly credited with creating 63,000.

Presidents don’t have much power, generally speaking, to significantly change the course of the economy themselves. The factors that do matter are largely outside of their hands, such as productivity growth or oil spikes. But Trump still wants personal credit for history shattering job creation. The facts simply don’t back him up.

Donald Trump In These Times Job Growth State Of The Union