It reminds me of the thousands of women who marched in 1979 — but now, men are cheering 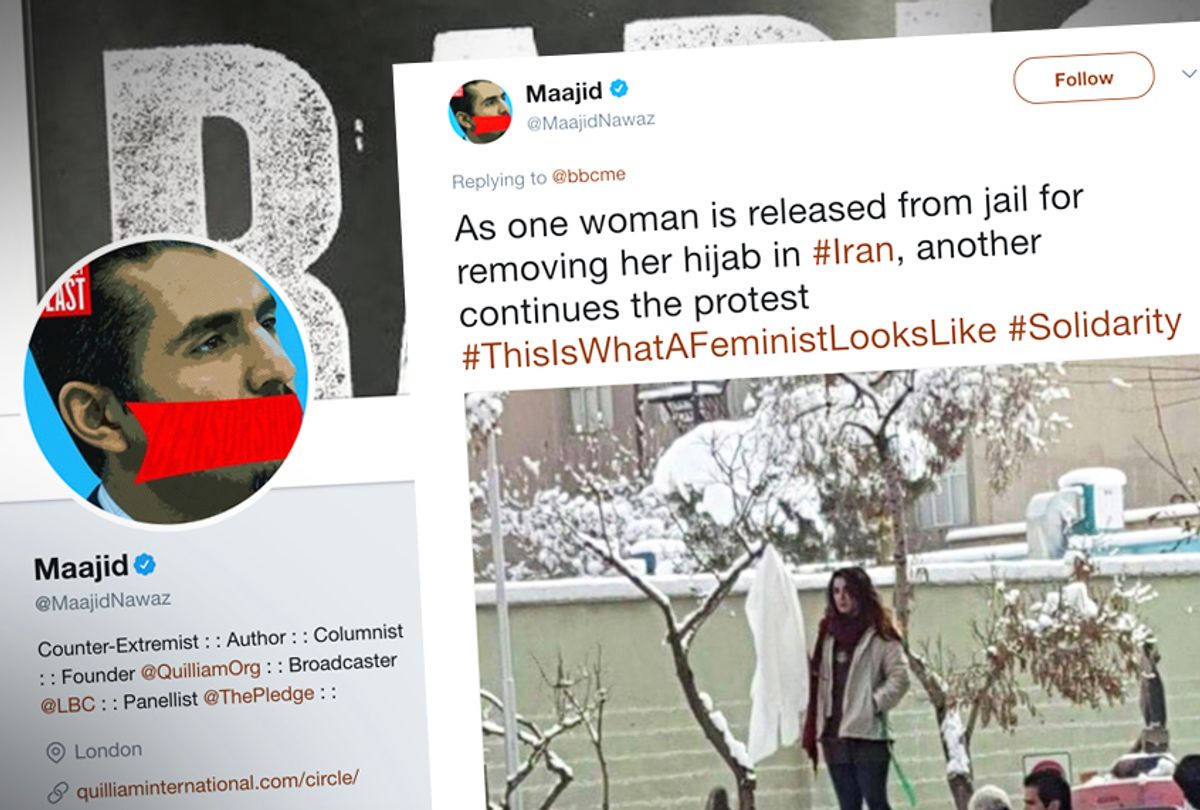 In late December, a young woman appeared standing atop a utilities box in front of the French Bakery on Enghelab (Revolution) Avenue, one of the busiest streets in Tehran. She was holding a long stick with a white veil hanging limply off the end of it. She appeared just before the recent wave of protests that swept across Iran. Perhaps because of her timing, close to the beginning of the Iran protests, she was turned into a symbol of the protests themselves.

The young woman's act of defiance actually had very little to do with the protests, which focused on inflation and government corruption. She must have stayed only briefly, because when she suddenly disappeared, no one knew who she was, nor where she went. She may have been Vida Mohaved, as some claimed later -- a 31-year-old mother of a toddler. After she disappeared, her image started circulating with a single hashtag #Where_is_she.

The young woman became known on social media as "The Girl of Enghelab Avenue." Last Monday, when Vida Mohaved was released after four weeks in prison, another woman appeared on a utilities box on the same street. And sure enough, another one followed soon after her, standing on a concrete bench, her hair dyed green, with a black veil hanging off a stick.

There was momentum building in the images and videos that circulated on Facebook and Twitter. An elderly woman, bent over her walking stick, climbed up on a fountain and waved her veil from the end of her now-retooled walking stick. She didn’t need anyone’s help getting up there, either.

Then, in Mashhad, one of the most staunchly religious cities in Iran, a woman, veiled head to toe, got on top of a utility box and waved a black veil on a stick.

This use of the veil isn’t an anomaly, as some may rush to surmise. In Iran, the veil has been used for centuries now, by religious and secular women, in defiance against structures that are morbid and in need of renewal.

In 1848, a distinguished female poet and religious scholar from the city of Qazvin is said to have removed her veil in an assembly of 81 men to call an end to the ruling political and religious structures of her time. Although everyone talked about the incident, very few of her contemporaries admit to seeing her unveiled. In fact, only one eye-witness has anything much to say about it.

The act of seeing itself implicates men in some complicated ways, it would seem. Some men implied that the poet’s veil may have slipped off. Others just report that one of the men in her presence was so gravely shaken that he cut his throat with his own hands. Covered in blood and shrieking with excitement, he fled the scene.

Indeed, when Iranian women resist mandatory veiling, the threat of national division and the disintegration of the national body looms so large that it is safer to snuff out the question entirely. Renowned American feminist Kate Millett noticed this nearly a century and a half later, when she came to Iran to join the women’s march just after the revolution in 1979.

Men and women fought together in the Iranian Revolution to upend an outdated and oppressive system of government. Just as in other nationalist revolutions, though, women who fought and won alongside their men were later asked to give up their civil liberties to maintain national unity and prevent “unnecessary fractions in the national body.” Ultimately, that national body was to be led by a new patriarchy, whose legal systems would give Shiite men twice the rights that women enjoyed. Women hoped against all odds that various factions would agree on a system of government that, unlike the U.S.-installed former monarchy, would represent the Iranian people. Instead, women were left with a new government that marked its difference to the rest of the world by instituting compulsory veiling for all women, regardless of religion.

On Feb. 1, 1979, Khomeini returned to Iran from his exile in Paris and established a theocracy and a civil code ideologically committed to the segregation of the sexes and inequality of women. Starting that day, the country where I was born fundamentally changed from the land of my girlhood, where women wore miniskirts, go-go boots and beehive hairdos, to a country where women’s modesty became the trademark of the nation’s identity.

On March 8, 1979, hundreds of thousands of women, veiled and unveiled, came together shoulder to shoulder to protest the Supreme Leader Ayatollah Khomeini’s mandatory veiling laws. As Millett noted in wonderment, Iranian women defied “everything.” They marched to demand their freedoms, and they marched for the freedoms of men and women both.

I watched that event from afar, with awe. My family left in 1975, as Khomeini’s revolution was taking root.

Thirty-nine years later, I am once again watching the country of my birth from afar. And what I notice this time, as I look at the images of girls and women of Enghelab Avenue, is the presence of men. In every one of the images of a woman with her veil on a stick men are there, turning, looking, and watching — with a hint of awe in their eyes. Men recording and snapping pictures of women standing on boxes and park benches. Men, online and off, applauding, with great pride, women who willingly defy national laws to demand civil liberties as equals. This is striking, and a radical difference from times past.

Thirty-nine years later, men have joined the movement of the “Girls of Enghelab Avenue.” In so doing, they serve as a reminder to the world that revolutions don’t always begin in the streets. In the private sanctuaries of their homes, these images show, Iranian men and women have already traveled far, rejecting how the government wants them to behave, and working in solidarity for tangible equalities and legal rights for all.

Negar Mottahedeh is an associate professor of film and media studies in the Program in Literature at Duke University. Her most recent book about citizenship and civic engagement during the Iranian post-election crisis of 2009 is "#iranelection: Hashtag Solidarity and the Transformation of Online Life" (Stanford University Press, 2015).