You can't control the weather — even in war

Weather, climate and astronomical occurrences have influenced the waging of war by man since prehistory 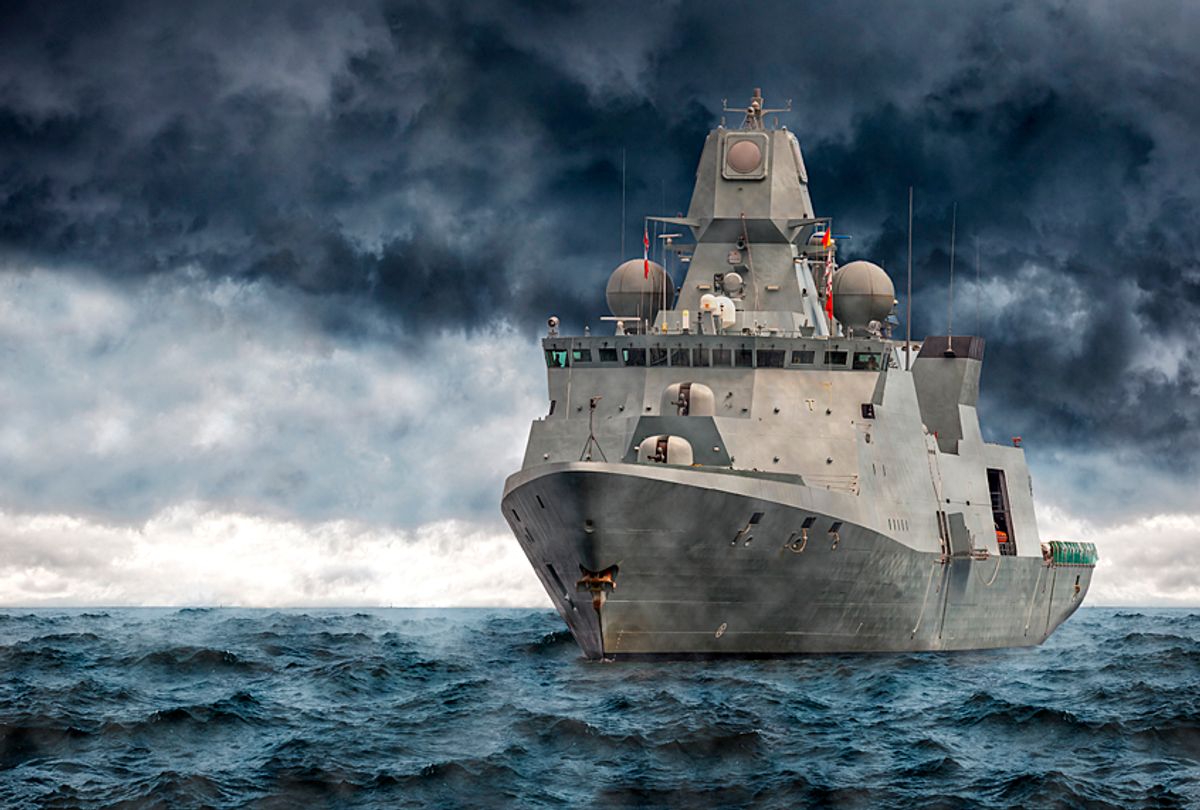 If you know Heaven and you know Earth, you make your victory complete. —Sun Tzu

Much has been made in literature of whether war is a science or an art. Is it simply the correct application of figures and statistics in a formulistic way to achieve a desired result, or are there too many unex­plainable and unquantifiable variables? Perhaps, as with many other things, the answer lies somewhere in the middle. While we may be able to observe and predict some elements of war, others are beyond the study or control of generals and strategists, with weather and nature being in this last category.

The British historian, Sir Edward Shepherd Creasy, wrote one of the first books on pivotal battles in world history in 1851. It is telling that of the fifteen battles he chose for his work, thirteen, including Marathon, Syracuse, Gaugamela, Teutoburg, Châlons, Tours, Hast­ings, Calais, Blenheim, Poltava, Saratoga, Valmy, and Waterloo, were heavily impacted by weather events. In fact, meteorological condi­tions that favored one side seem to be the only constant among the various engagements. Even Lt. Col. Joseph B. Mitchell’s updated ver­sion of Creasy’s work, which features five additional nineteenth and twentieth century battles, includes at least four that were impacted by weather.

Weather, climate, and astronomical occurrences have influenced the waging of war by man since prehistory. Halley’s Comet helped to announce the fall of the Shang Dynasty in China, a solar eclipse fright­ened the Macedonian army enough at Pydna in 168 bc to ensure vic­tory for the Romans, a massive rain storm turned the field of Agincourt to mud in 1415 and gave Henry V his legendary victory, fog secured the throne of England for Edward IV at Barnet in 1471, wind and disease conspired to wreck the Spanish Armada, snow served to prevent the American capture of Quebec in 1775 and confined the Revolution to the Thirteen Colonies, excessive heat gave rise to the legend of Saladin at the Horns of Hattin in 1187, freezing cold nearly stopped Washing­ton’s crossing of the Delaware, and an earthquake helped to spark the Peloponnesian War. These serve as only a small portion of the many instances where nature has tipped the balance in combat.

Due to a combination of its destructive potential and unpredict­able occurrence, the impact of nature has worried both common peo­ple and military commanders from ancient times to the present. It is perhaps not surprising then that many of the chief gods of ancient man involved some element of weather within their bailiwick, such as Jupiter, Zeus, Indra, Ba’al, and Horus. Many of these were at the same time gods of war as well, including the latter three. Numerous other cultures had additional, lesser deities who represented both weather and warfare, notably Theispas of Urartu, Tlaloc of the Aztec, Tohil of the Maya, Shala of Sumer, and the Norse god Thor. Man’s agri­cultural revolution had much to do with this, as weather was often the determining factor between years of plenty and years of starva­tion and ruin. Thus, more agricultural civilizations tended to worship chief gods who connected to farming while pastoral or nomadic peo­ple worshipped deities of various other elements, such as Tengri of the Mongols or Igaluk of the Inuit who represented the sky and moon respectively.

This close association between a successful control of the environ­ment and victory in war is clearly seen in one of the most important Greek myths. As retold by Hesiod in his "Theogony," the Titanomachy was a ten-year-long war between Zeus and the Olympians against Cro­nus and the Titans. Zeus’s acquisition of lightning—allowing him to control nature and defeat his father in battle—finally led Zeus’s upstart faction to victory over his father.

Then Zeus no longer held back his might; but straight his heart was filled with fury and he showed forth all his strength. From Heaven and from Olympus he came forthwith, hurling his lightning: The bold flew thick and fast from his strong hand together with thun­der and lightning, whirling an awesome flame. The life-giving earth crashed around in burning, and the vast wood crackled loud with fire all about. All the land seethed, and Ocean’s streams and the unfruit­ful sea. The hot vapor lapped round the earthborn Titans: Flame unspeakable rose to the bright upper air: The flashing glare of the thunder-stone and lightning blinded their eyes for all that there were strong. Astounding heat seized Chaos: And to see with eyes and to hear the sound with ears it seemed even as if Earth and wide Heaven above came together; for such a mighty crash would have arisen if Earth were being hurled to ruin, and Heaven from on high were hurl­ing her down; so great a crash was there while the gods were meeting together in strife. Also the winds brought rumbling earthquake and dust storm, thunder and lightning and the lurid thunderbolt, which are the shafts of great Zeus, and carried the clangor and the war cry into the midst of the two hosts. A horrible uproar of terrible strife arose: Mighty deeds were shown and the battle inclined. But until then, they kept at one another and fought continually in cruel war.

Shortly afterward, the new inhabitants of Mt. Olympus became involved in an even greater struggle. Gaia, out of anger due to the treatment of the giants, gave birth to the monster, Typhon.

Strength was with his hands in all that he did and the feet of the strong god were untiring. From his shoulders grew a hundred heads of a snake, a fearful dragon, with dark, flickering tongues, and from under the brows of his eyes in his marvelous heads flashed fire, and fire burned from his heads as he glared. And there were voices in all his dreadful heads which uttered every kind of sound unspeakable; for at one time they made sounds such that the gods understood, but at another, the noise of a bull bellowing aloud in proud ungov­ernable fury; and at another, the sound of a lion, relentless of heart; and at another’s, sounds like whelps, wonderful to hear; and again, at another, he would hiss, so that the high mountains re-echoed.

Though various versions of the story exist, in all Zeus once again relied upon his power over the forces of nature to defeat the enemy.

And through the two of them heat took hold on the dark-blue sea, through the thunder and lightning, and through the fire from the monster, and the scorching winds and blazing thunderbolt. The whole earth seethed, and sky and sea: and the long waves raged along the beaches round and about, at the rush of the deathless gods: and there arose an endless shaking.

Nor was the idea of nature interacting with world affairs limited to the West. The Indian classic, the Mahabharata, mentions a number of nat­ural and climatic occurrences that portended disaster in the upcoming Kurukshetra War, a legendary conflict in Vedic literature.

Strong winds are blowing fiercely and the dust ceaseth not. The earth is frequently trembling, and Rahu approacheth towards the sun. The white planet (Ketu) stayeth, having passed beyond the constellation Chitra. All this particularly bodeth the destruction of the Kurus. A fierce comet riseth, afflicting the constellation Pusya. This great planet will cause frightful mischief to both the armies.

The many variables and unknowns of warfare have been best described by the expression “fog of war,” after the following pro­nouncement by Clausewitz: “War is the realm of uncertainty; three quarters of the factors on which action in war is based are wrapped in a fog of greater or lesser uncertainty. A sensitive and discriminating judgment is called for; a skilled intelligence to scent out the truth.” It is perhaps telling that this great theorist used a meteorological term to designate the unknown in war. Even as warfare became more pro­fessional and more of a science following the Enlightenment, weather remained an understood, but still often unpredictable, component of fighting.

Over the past four thousand years, weather and nature have both hindered and helped various campaigns and battles, occasionally even altering the course of history in the process. In this vein it closely paral­lels the military history of disease, as both tended to be unpredictable and uncontrollable elements. Similarly, as technology and knowledge advanced, man’s understanding and control over both reached a point of, while not immunity, at least partial resistance. Today both pesti­lence and the elements of nature still affect the planning and waging of war, and yet they are variables that can be accounted for to some extent. Yet, as with many other elements in the fog of war, nature is hardly a domesticated force and continues to unpredictably affect or predictably constrain combat around the world.