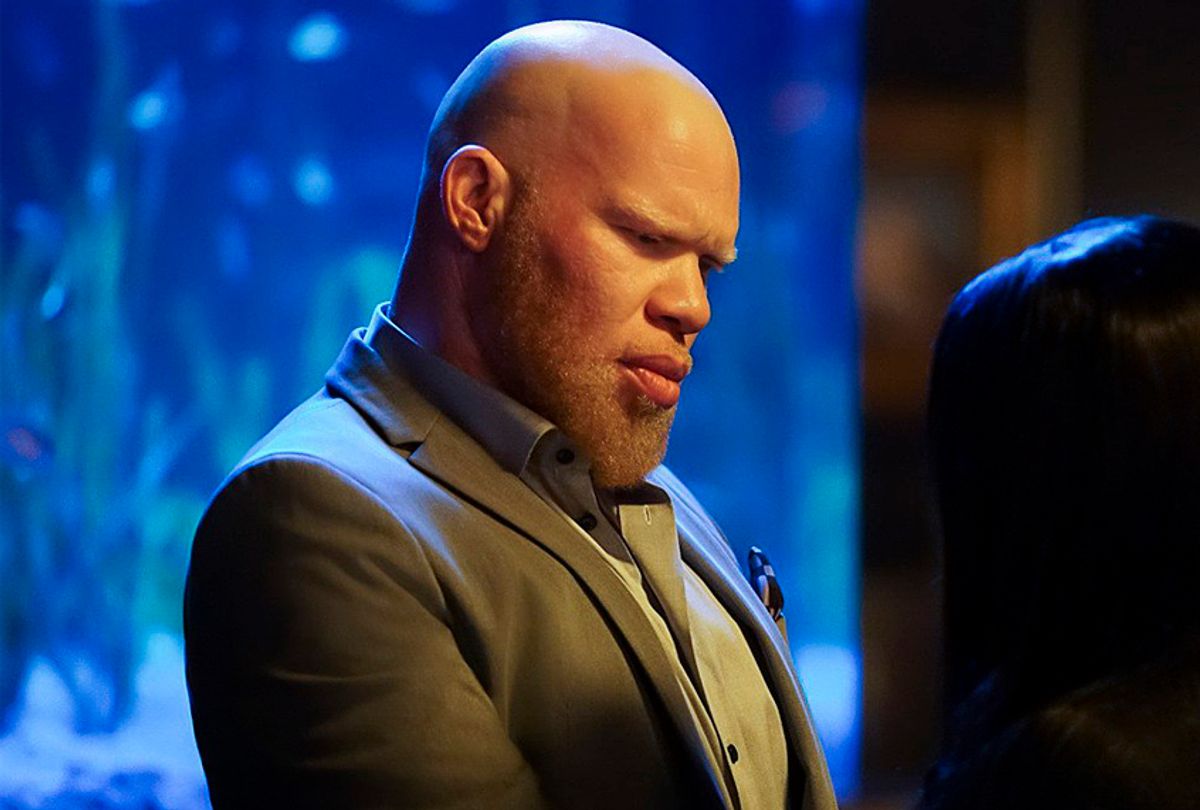 Rarely does the mere presence of an actor on television qualify as a small example of revolution. That’s a weighty word, revolution. But how else would one describe the significance of Marvin Jones III on The CW’s “Black Lightning?” As the season’s central villain, Tobias Whale, Jones commands a room with his booming baritone and can be convincingly terrifying without raising his voice. In the way of all sinister heavies, he’s at his most dangerous when he smiles and pays his quarry a compliment.

Both the character and Jones are African American men who live with albinism, a genetic predisposition characterized by the decreased or complete absence of melanin in the skin and hair pigmentation, as well as issues with vision. This places Jones and Tobias Whale in a curious and tense space within their communities, whether real and fictional.

By virtue of his series regular status on “Black Lightning,” currently airing its first season Tuesdays at 9 p.m. on The CW, Jones also makes history as the first major TV antagonist with albinism, one with a significantly developed backstory, screen time and, hallelujah, lots of dialogue.

“The actor that has albinism has always been pigeonholed and restricted to no-speaking roles that have a bit of supernatural and or villainous air to then, in the history of film and television that I have studied, as an African American actor with albinism,” Jones told Salon in a recent interview. “That’s why it is such an honor, a pleasure, and a privilege to play the role of Tobias Whale.’”

Tony Isabella created “Black Lightning” for DC Comics in 1977, making Jefferson Pierce one of the first African American superheroes in comics and writing Tobias Whale, his nemesis, as a man with albinism. “I don't even know if Tony even knew how much that would ripple into the future of society, as it is now,” Jones observed. “Here we are in 2018, when I have a character who is very much a villain, he’s a bad guy, but he's also very human. There's nothing supernatural or ‘meta,’ necessarily, about him at this point.”

On The CW's “Black Lightning,” Jefferson Pierce (series star Cress Williams) is as much at battle with ignorance, fear and a deficit of respect in his community as he is with the very real gangsters intimidating civilians. This leads series creator Salim Akil to design Jones’ character as an embodiment of the corrosive peril posed by self-hatred and disunity while also addressing intra-community ills including colorism, the divisive idea that having a darker complexion is less desirable than lighter skin, or the reverse.

In this way, Tobias also represents the experience of people who move through the world with albinism, who endure a lifetime of “othering” due to their condition — comments, ignorant assumptions, exclusion. African Americans born with albinism often face another level of discrimination, not only from a dominant culture that assigns prejudiced traits to people based on the visual cue of skin color, but from within their own community.

To that end Jones’ portrayal channels many of the demons plaguing the community of Freeland. Tobias represents the antithesis of the series’ obvious themes of pride and self-respect, traits that echo the main thrust of the series’ predecessor on Netflix, “Marvel’s Luke Cage,” as well as reverberating with the culture-wide anticipation for the theatrical release of “Black Panther.”

Importantly, however, while Tobias’ albinism plays a role in his deep well of anger it is not the root cause, as we witness scenes of his abusive childhood, an all-too-common tragedy that shapes many.

“He’s very relatable to every element inside of us that is a villain, or roots for the bad guy,” Jones explained, “You can line him up with all of your favorite villains, whether it'd be Lex Luthor, the Kingpin, the Joker, and so forth.  It’s just an added that he has albinism and he has the story behind him, and uniqueness. But he is very much real and relatable and even, you know, put on in a pedestal.”

Tobias Whale is a crime lord content to exist in the shadows for reasons strategic as well as physical. And like other comic book villains, Tobias is the dark result of years of frustration, consistently thwarted ambition and twisted talent. How he’s treated due to his appearance, then, is just one of many factors.

An exchange between Tobias and an underling that raised a few eyebrows within the opening episodes of the series lays all of this out with burning clarity. “Damn, boss,” the man says, “You really do hate black people. “

“No, I love black people,” Tobias responds. “I hate incompetent, thick-lipped, scratch-where-it-don't-itch Negroes like you.”

“Obviously from what you've seen already, he's dealt with prejudice, bias and ignorance amongst his own people in regards to who he is and his genetic difference,” Jones said. “The ignorance gets compartmentalized to those who may be from the outside looking in, and not necessarily from people from the inside looking out — meaning close friends, family members, neighbors . . . who may have a level of intelligence about a lot of things, but then when it comes down to genetic disposition, and in particular albinism, may be completely ignorant.

“It’s OK to be ignorant about certain things, I think,” he added. “But to be insensitive, that creates a whole other layer of hurt.”

In Tobias this manifests as a simmering rage that’s exploited by his boss Lady Eve (Jill Scott). In a chilling moment during the episode titled “Black Jesus,” she coos, "Did you know that in Africa some people believe albinos are magical? People actually kidnap random albinos, cut them up, grind their bones and sell it as magic dust."

Her cruel speech is based in fact, not merely in the stuff of comic books. Men, women and children with albinism in countries including Malawi, Tanzania and Burundi have been hunted and butchered for their body parts.

“Lady Eve used a truth about Africans with albinism to poke and point at Tobias’s likeness, and I think his intelligence, too,” Jones said. “I think that she wanted to see if he was aware of who he was in perception to the ignorant world over. That’s just one perspective. It's a truth, and to utilize that when speaking to Tobias as a poke means that you see it as something that's derogatory, negative and heinous. Which it is.

Jones went on to praise the writers of ‘Black Lightning’ for touching on that issue. “It isn't looked at enough, in my opinion,” he said. “I say that not just because I'm an African American with albinism, but because I’m a human being and, and my concern is about humanity.”

In the United States, an estimated one in every 17,000 people live with some form of the condition, and here, the main concern is discrimination and uninformed curiosity. As a member of the West Coast hip-hop group Strong Arm Steady (whose membership once included Xzibit) Jones performs under the moniker Krondon and, in that capacity, has been a visible part of the music scene for well over 15 years. And he’s also saddled with constantly answering questions about his skin, albeit not as sinister as Lady Eve’s.

I wondered if that must get tiresome for Jones, especially given the recent elevation of his profile. But he answered, quite sanguinely, “honestly, I’m inspired by it.

“This role was given to me — and even my role as a hip hop artist who has some kind of notoriety, popularity, that's also a responsibility — to be a representative for those that don't necessarily always have a voice, you know?” he said. “Who else is gonna do it for that kid at the high school in Wisconsin, or in New Orleans or Atlanta or New York or L.A. —because they're out there — or that kid in London or in Africa who is going, ‘wow Lady Eve’s talking about me’?”

“Now,” he added, “there is a representative who competently and hopefully with style and grace as well as skill and ability, is representing a side of humanity that isn't always represented in a medium like this.”