In the early 19th century, Richard Potter was an icon — the most celebrated ventriloquist and magician in America

By John A. Hodgson 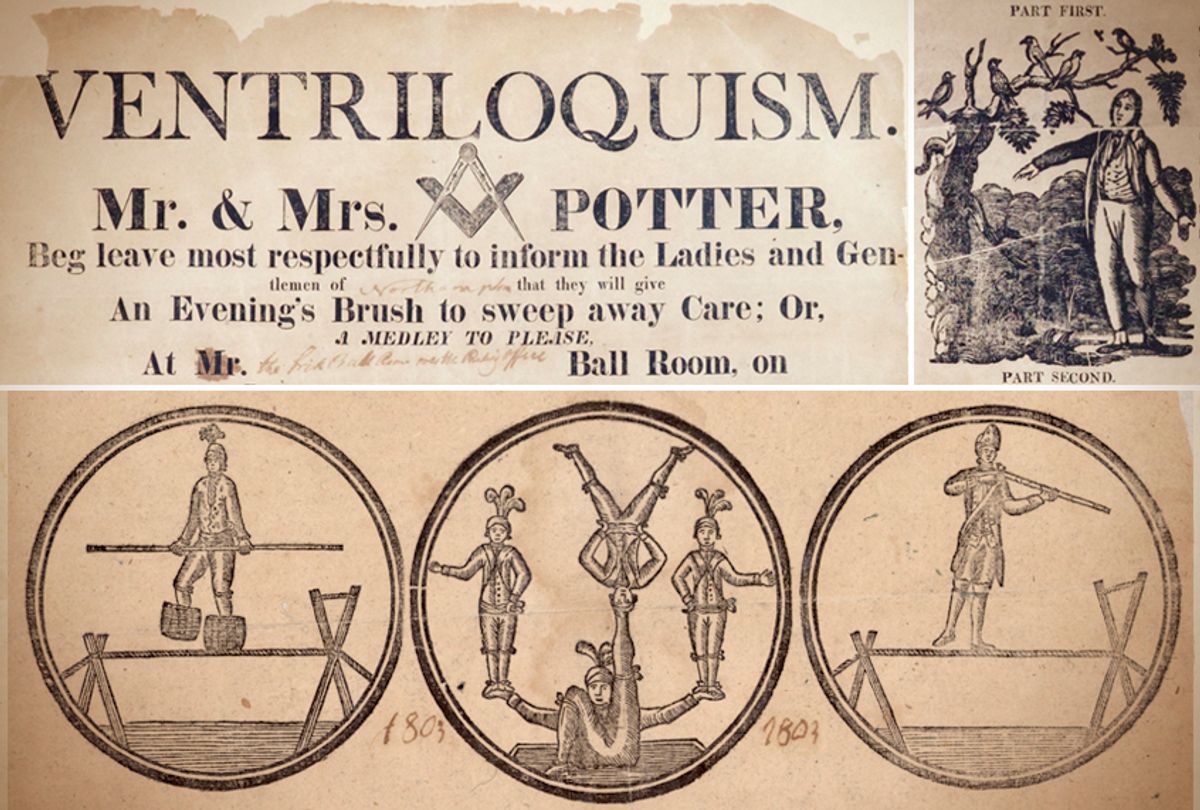 All his adult life, Richard Potter demonstrated a mastery of misdirection. He was a showman, so first and foremost he needed to call attention to himself: hence the flowing robe, the wig and costumes, the fine carriage and handsome matched horses, the life- sized, carved wooden human figures standing on pillars before his house, the fastidious dress and exemplary manners. But he was especially a magician and a ventriloquist—a sleight-of-hand, sleight-of-voice man—so he also needed to direct attention elsewhere: you were to see or hear what he could do, but you were not to understand how he did it.

He was very, very good at what he did. For many years he was the foremost ventriloquist in America, and the most celebrated magician as well. Indeed, he was the most famous American entertainer of any kind: there was no actor or vocalist or musician in the country who could even come close to Richard Potter’s renown. It wasn’t just secondhand fame, either, the kind that could be spread by stories from the daily newspapers of the large East Coast cities and republished as entertaining filler in the weeklies of remote little towns, rumors from a wonderful world that the provincial readers were unlikely ever to experience—George Frederick Cooke taking the stage in the role of Iago, the sea serpent again appearing off Cape Ann, the Pig of Knowledge doing arithmetic. While Richard Potter always made his home in New England, his tours took him across the length and breadth of the nation. Wherever you lived in America, even if you had not yourself attended at least one of his exhibitions, you probably knew people, perhaps even many people, who had. When he died, in 1835, he had become a national icon.

Fame comes in various flavors, of course. As a showman, Richard Potter could not expect to achieve the kind of recognition traditionally reserved for prominent politicians, military leaders, or eminent writers. Moreover, even the formal theater at this time still suffered some degree of disrepute across wide swaths of American culture; more populist forms of entertainment, like Potter’s, incurred that kind of cultural condescension and disapproval to an even greater degree. Many Americans disapproved of such amusements in and of themselves, associating them with dissipation, frivolity, and “juggling” (knavish trickery), and many others who openly enjoyed them nevertheless felt that their professors were not entirely respectable. But enjoy those entertainments people certainly did; and Richard Potter himself contributed enormously to the long, gradual process of making American showmanship respectable. . . .

In Mobile, there occurred a few episodes, never reported in Potter’s lifetime, that remind us how fundamentally risky his touring could be and how particularly vulnerable he himself always was. These anecdotes came from Goodwin’s inquiries about Potter in Andover in 1875 and were reported by Silas Ketchum in his seminal 1878 sketch of Potter: “He was once turned out of a hotel in Mobile, while Thompson of Andover traveled with him, by a landlord who would not entertain a ‘nigger.’ Potter did not deny the charge, removed to another hotel, performed twelve nights in the town, and carried off $4,800 in silver, in a nail cask, as the net result. Learning that there was danger of being waylaid, he gave out that he was going to a certain place on a certain day, and departed the night previous in the opposite direction.” The picaresque qualities of these stories—shrewd, honest protagonist outwits nasty antagonists and profits at their expense—should not blind us to the very real dangers of the threats—racial discrimination and subjugation, highway robbery—that they suggest.

The incidents in Mobile changed nothing for Potter; they simply served to remind him forcefully of concerns that he always needed to keep in mind in any case. But significant change, nonetheless, was already coming, even as he traveled east across Alabama toward the coastal states.

For any itinerant performer hoping to find large and receptive audiences in the South Atlantic states, the cities of Savannah and especially Charleston were the preeminent attractions. Not only were they populous; they were also prosperous, with a growing leisure class, and had long-established traditions of support for theater and tolerance of entertainers at a time when many or most New England communities were still persecuting strollers and enforcing antitheatrical laws. James Rannie, Potter’s mentor in ventriloquism, had spent several months in Charleston and Savannah in the winter and spring of 1802–3; and then John Rannie, Potter’s first instructor in magic and first American mentor, had spent a full year in and between the two cities in 1807–8. Both men thus knew both cities well and had developed extensive networks of contacts among the theater managers, entertainers, and hoteliers there. Potter’s ropedancing mentor, Signior Manfredi, had performed with his family troupe in Charleston for over a month, too, in 1808, and may have shared information about the city as well. So Richard Potter would have been well briefed on both these venues, and they would have beckoned as enormously important destinations for him as he journeyed across the unsettled scrublands of southern Alabama and the Creek Indian territory of southwestern Georgia. Very simply, it is almost inconceivable that Richard Potter, after enduring the long, hard overland slog from New Orleans to the Atlantic Seaboard, would not have planned to perform at least in Charleston and probably in both cities, and for a considerable period of time.

Doubtless such was Potter’s intention when he left New Orleans. In the summer of 1822, however, the social climate in Charleston, and indeed throughout the Tidewater region of Georgia, the Carolinas, and Virginia, significantly and even drastically changed. In May of that year, the city fathers of Charleston were stunned and alarmed by reports of a planned slave uprising. They quickly initiated militia patrols, arrests, and secret inquisitions; by the end of June they had arrested more than thirty blacks, both slaves and freemen, and in July they arrested one hundred more. Six of the initial detainees, including the presumed ringleader of the plot, a free black carpenter named Denmark Vesey, were quickly executed, on 2 July. Twenty- nine more were executed later that month or early in August, and another 31 were transported.

Initially the Charleston newspapers had almost nothing to say about these events, although brief stories about the sentencing and swift execution of Vesey and several other conspirators (all slaves) for “an attempt to raise an Insurrection in this State” did appear. But wild rumors and intense alarm about the planned uprising spread rapidly and widely, along predictable lines: for example, a letter from a Charleston resident to a friend in New York which was published there in July reported, “It is said that they [the arrested conspirators] have, or that some of them have, acknowledged their object to have been the murder of the white males, the taking of the ladies for their wives, and the plunder of the city.” Consequently, on 10 August the governor of South Carolina published and widely distributed a circular about “the Negro Plot.” This document, which was republished by many newspapers, acknowledged that, since June, “the public mind was agitated by a variety of rumours calculated to produce great excitement and alarm” concerning “a very extensive conspiracy.” It aimed to counter those “gross and idle reports, actively and extensively circulated, and producing general anxiety and alarm” by assuring citizens that the conspiracy had been limited, fully uncovered, and thoroughly stifled—and that it had been in any case doomed from its inception by the incapacity, folly, and “dastardly dispositions” of slaves (“Servility long continued debases the mind, and abstracts it from that energy of character which is fitted to great exploits”).

The report went on to make clear that free blacks, such as the ringleader Vesey, were quite dangerous because of their easy and influential interactions with slaves; that blacks who could read and write, such as Vesey and coconspirator Monday Gell (“He could read and write with facility, and thus attained an extraordinary and dangerous influence over his fellows”), were particularly dangerous; and that one of the main conspirators (a third “principal,” along with Vesey and Gell), Gullah Jack, was very dangerous because, as a native Angolan “conjuror and physician,” he had great influence over other blacks (“Vesey, who left no art or power unassayed, seems in an early stage of his design, to have turned his eye on this Necromancer, aware of his influence with his own countrymen, who are distinguished both for their credulous superstition and clannish sympathies”).

Richard Potter was a free black man, a literate man with a remarkable gift of gab, and a conjuror—the very “Emperor of Conjurors,” by his own claim. Were he to present himself publicly, not to mention advertise his particular gifts and abilities, in Charleston, South Carolina, in the fall of 1822, he would certainly have blazoned himself to a great many of its citizens as indisputably the most dangerous man in the city.

The Augusta (GA) Chronicle published a long, three-part account of the Charleston slave insurrection in consecutive issues running from 29 August to 5 September 1822, and indications are that Potter reached Augusta (another town where James Rannie had once performed, in April 1803) in early September, so he would have been able to read the story then, although probably he had already been hearing rumors about it along his way. It was now abundantly clear that he would not, after all, be exhibiting in Savannah or Charleston, nor indeed in any other area of the Deep South, where slaves were numerous and slave owners agitated. Instead, Potter headed straight to Raleigh, North Carolina (probably on the Fall Line Road, which would have taken him through Columbia, Camden, and Cheraw, South Carolina), and made good time doing it. He probably did not exhibit or even lodge in Columbia: William Garner, one of the main insurrection conspirators, had been traced to and captured near Columbia in late July.

By John A. Hodgson

John A. Hodgson, former Dean of Forbes College at Princeton University, is the author of books on Wordsworth and Shelley and the editor of "Sherlock Holmes: The Major Stories with Contemporary Essays." His book "Richard Potter: America's First Black Celebrity," is out now from The University of Virginia Press.

MORE FROM John A. Hodgson