The AR-15 has been used in numerous mass shootings, including Wednesday’s deadly school shooting in Parkland, FL 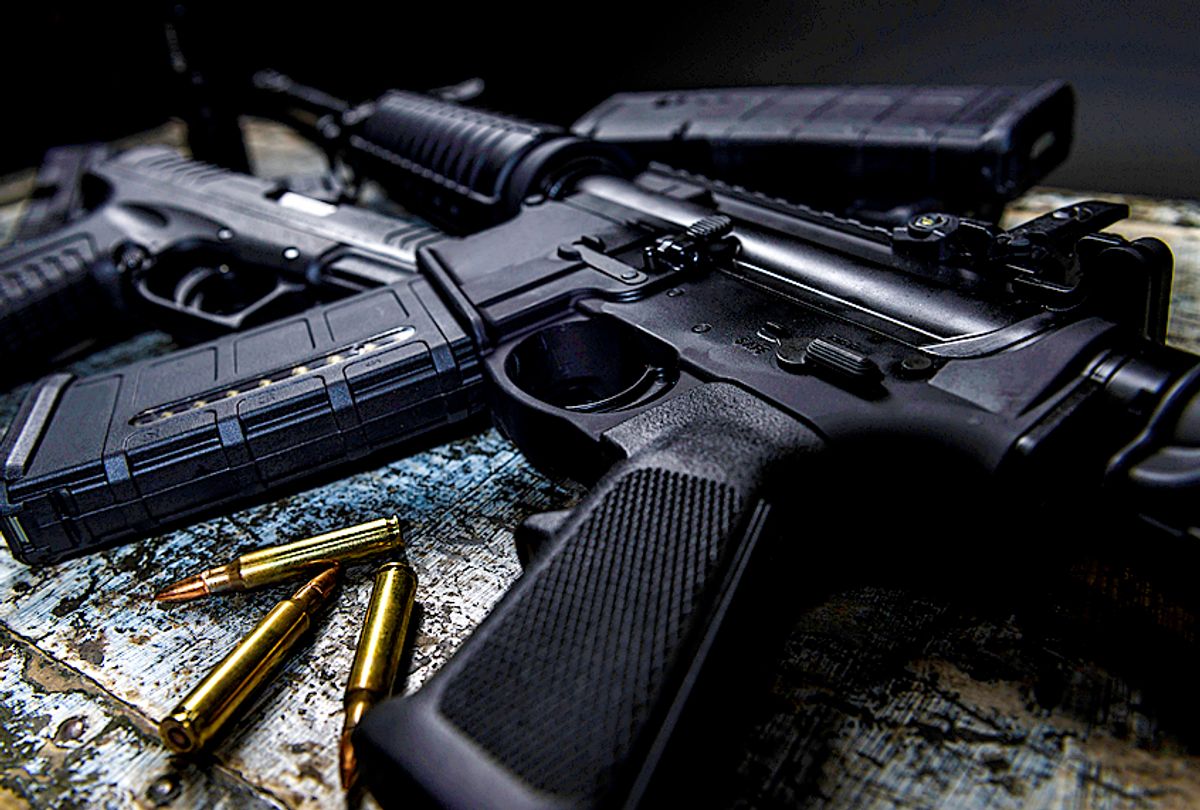 Numerous right-wing media outlets have for years sent their followers sponsored messages touting giveaways of AR-15s and instructions on how to make the rifle “completely ‘off the books.'” The AR-15 has been used in numerous mass shootings, including Wednesday’s deadly school shooting in Parkland, FL.

Los Angeles Times national reporter Matt Pearce explained that “the latest, most serious shootings all seem to have one new thing in common: the AR-15 semi-automatic assault rifle. . . . in all of the latest incidents — Newtown, Conn., in 2012; San Bernardino, Calif., in 2015; Orlando, Fla., in 2016; Las Vegas, 2017; Sutherland Springs, Texas, 2017 — the attackers primarily used AR-15 semiautomatic rifles.”

Right-wing media outlets over the years have taken money to help glamorize AR-15 rifles with free giveaways and instructions on how to make the deadly weapon “off the books.”

In summer 2017, the Media Research Center, Newsmax, RedState, TheBlaze, and Townhall sent sponsored emails from The Concealed Network touting giveaways of “3 Saint 5.56 AR-15’s.” The email stated that the AR-15 is “a lethal firing machine” that “fires ammunition at lightning pace, and it’s pinpoint accurate.” 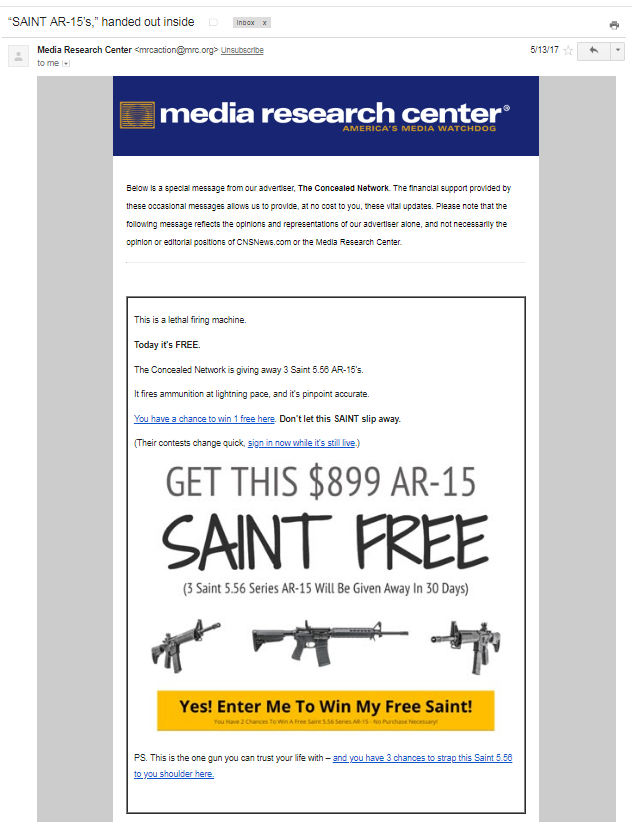 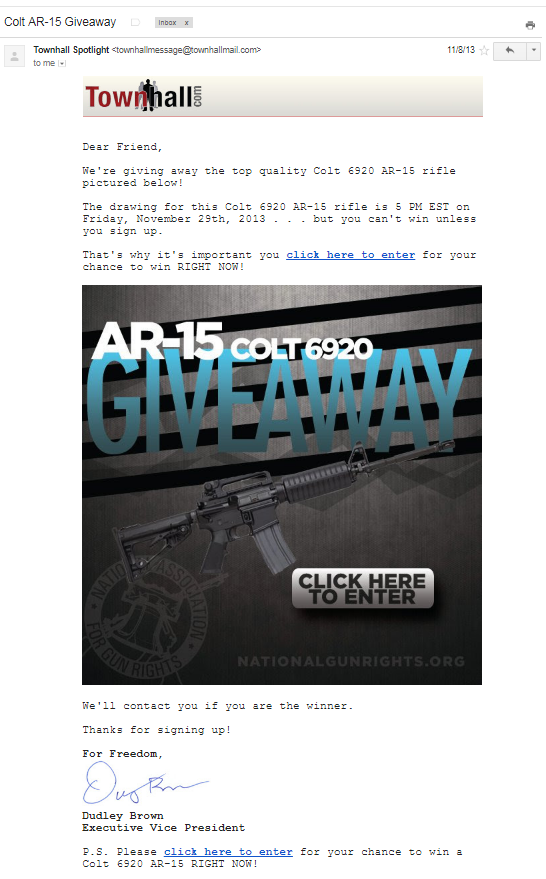 HermanCain.com, Newsmax, TheBlaze, and WND also sent emails in 2014 and 2015 touting how to build AR-15s “completely ‘off the books.’” 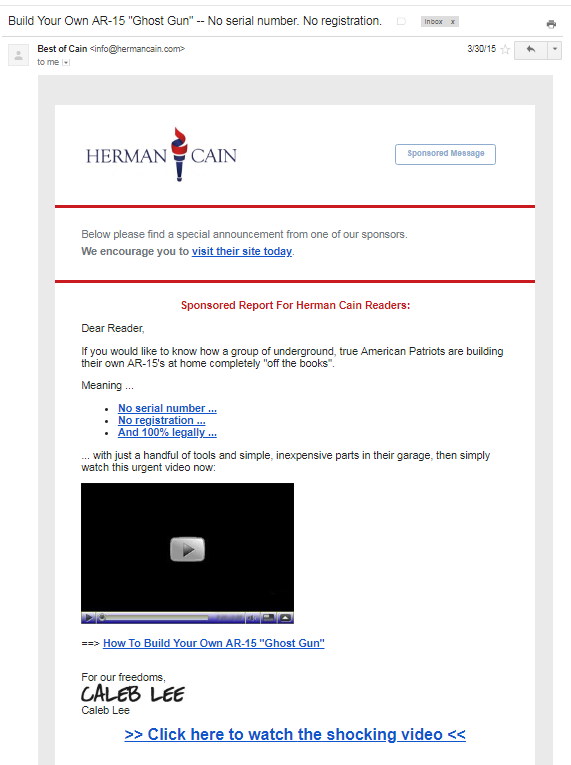 The advertisement takes readers to a page for the “Underground Assault Rifle System,” which claims to “reveal an amazing secret to free you from the tyrannical gun grabbers in Washington! You'll discover a legal (yet almost completely unkown [sic]) way for any American Citizen to exercise their 2nd Amendment rights by owning an AR-15 that's not registered or recorded anywhere — it's completely ‘off the books’!” Purchasing the system gets buyers access to, among other things, "step-by-step instructions" on how to make the AR-15.

Mother Jones’ Bryan Schatz reported in 2015 that it is “perfectly legal to build your own unregistered and untraceable semi-automatic firearm” but such weapons have been “turning up at crime scenes.”

The Daily Caller has frequently given away guns, including the Colt AR15A4 in 2014 through its Guns and Gear section.

Republican politicians have given away AR-15s over the years as part of their fundraising and publicity efforts.

The New York Times’ Jeremy Peters wrote in April 2014 of the NRA’s own gun giveaway efforts:

The National Rifle Association, which has been doing Publishers Clearinghouse-style gun sweepstakes since the 1980s, figured out the allure of free guns years ago. Back then, it used direct mail. Now, it employs a range of online campaigns, including Facebook-based contests that provide the organization not just with people’s names, but also with their information-rich public profiles and lists of their friends. Millions of people have entered these contests, the group said.