Who's in charge of the classified intelligence about Trump? Trump. It's a problem

When ultimate authority over releasing evidence rests with the subject of the investigation, we're in trouble 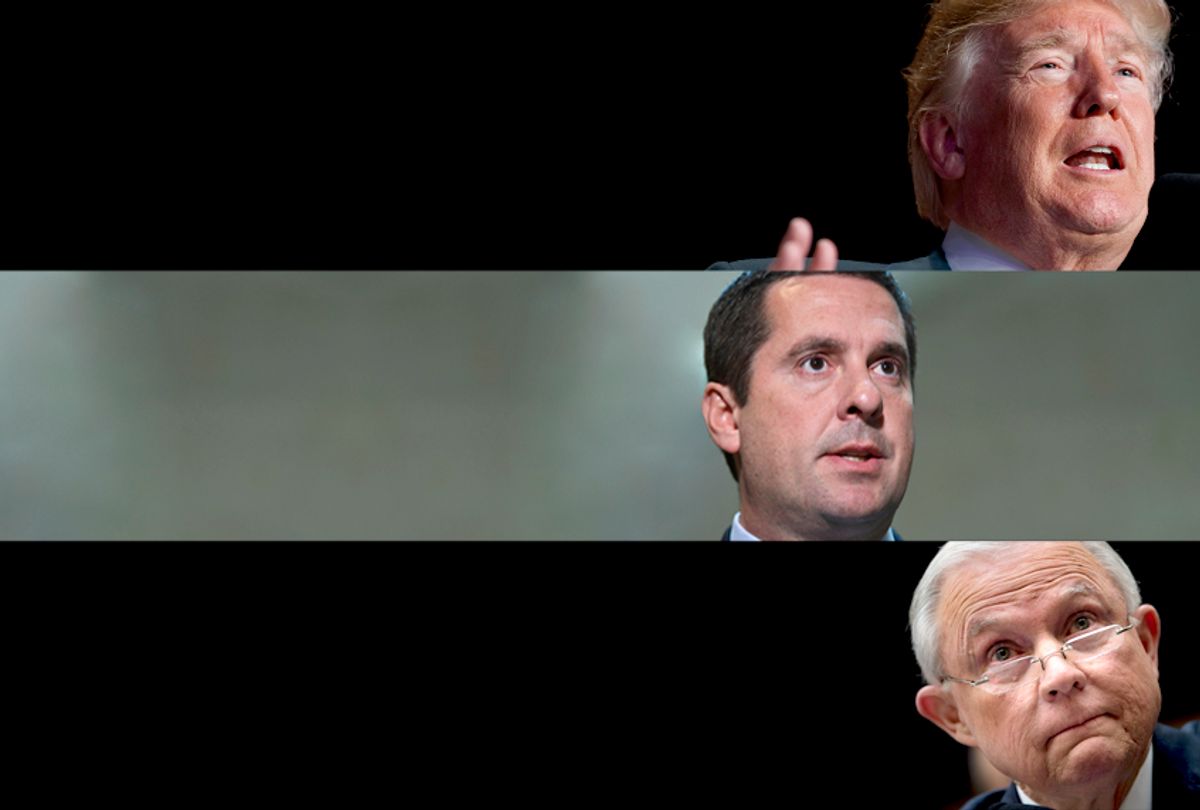 Ever since the House Intelligence Committee voted to release Rep. Devin Nunes' now-legendary "memo," and then sent it up to the White House for presidential permission to declassify it, I've been wondering: How is it possible that the subject of an investigation gets to look at the evidence against him and decide whether or not it sees the light of day? There's no appeal of President Trump's decision in a case like that. He has the ultimate and unquestioned power to do it. Is there any other situation in our society where this could happen?

There's been surprisingly little discussion of this bizarre circumstance. It came up briefly during this week's annual assessment of global threats before the Senate Intelligence Committee, when Sen. Kamala Harris, D-Calif., quizzed FBI Director Christopher Wray on the subject:

According to the White House statement, the president was the one that authorized the memo’s declassification. Do you believe there’s an actual, or at least appearance, of a conflict of interest when the president is put in charge of declassifying information that could complicate an ongoing investigation into his own campaign?

Then Harris got the real issue into the discussion by asking whether the president had the right to declassify information if he received it from a member of the Congress. She wondered whether the president should recuse himself from making decisions regarding his own case. Wray declined to answer, saying the president would have to review all these questions with the White House counsel.

Anyone who's following this story closely knows exactly what Harris was getting at. From the moment the House Intelligence Committee decided to investigate foreign interference in the 2016 election, Nunes -- who was a member of the Trump transition himself -- has been coordinating with the White House. He was caught red-handed last summer, making an utter fool of himself by holding a press conference in which he pretended to be delivering recently discovered information to the president, which was later revealed to have been provided to him by the White House in a midnight caper worthy of Inspector Clouseau.

Nunes then claimed to "recuse" himself from the probe, but although Rep. Mike Conaway, R-Texas, is now supposed to be in charge, Nunes remains involved up to his eyeballs, often working in secret and without consultation with the committee. It's extremely likely that he's still coordinating with the White House and sharing information about the case.

That is, unfortunately, not illegal. As Wray told the committee, the president has the right to classify and declassify any information the government produces and there's nothing that says members of Congress cannot provide him with whatever sensitive evidence they turn up that implicates him. Nobody ever expected members of a congressional oversight committee, even those of the president's party, to be so servile that they would willingly give up their own prerogatives in order to protect a president suspected of conspiring with a foreign government.

Trump was advised by White House counsel Don McGahn at the beginning of his term that the president "cannot have a conflict of interest," which he has repeated on a loop whenever he's asked about his myriad financial and business conflicts. Perhaps Trump believes he similarly "cannot have a conflict of interest" in terms of his legal exposure in the Russia investigation. McGahn should know better. This is the sort of assumption that got Nixon into trouble.

Natasha Bertrand at the Atlantic spoke with several experts on this subject, all of whom were troubled by the unprecedented situation. On the question of whether or not Trump should recuse himself from making decisions about classified documents pertaining to the investigation, some said he absolutely should, while others pointed to difficulties regarding the president's duties as commander in chief. David Kris, a FISA expert who served as assistant attorney general for the Justice Department’s National Security Division, told Bertrand that Trump should be careful:

Nixon showed us that level of intimacy between politics and law enforcement with his infamous "enemies list," which outlined ways to "use the available federal machinery," like IRS audits, "to screw our political enemies." Since then, every presidential administration, from Carter to Trump, has adopted policies limiting interactions between the White House and the Justice Department to protect the independence of prosecutorial decisions.

Trump doesn't understand that and he never will. As recently as last month he was telling the press that he likes to "fight back" and they "call it obstruction" -- pretty much admitting that he has tried to obstruct justice. He is the last person on earth who would recuse himself from an investigation into his own conduct. He would consider that to be just plain stupid. If he can declassify sensitive information that makes him look good and keep secret that which could incriminate him, he'll do it without a second thought. He will push the boundaries as far as possible and they are very far indeed.

But the problem goes far beyond Donald Trump. The classification system in the Unites States is a mess. It's been more than 20 years since the Moynihan Commission on Protecting and Reducing Government Secrecy, chaired by the late Sen. Daniel Patrick Moynihan, was released, showing that over-classification actually harms national security by making it more difficult to accurately assess threats and share information. The Brennan Center offered an updated study showing the same thing in 2011.

If we manage to get through the Trump years in one piece, perhaps one of the salutary effects of his blatant abuse of power will finally be a serious attempt to revise these rules. This is no way to run a modern democracy. Look where it's gotten us.