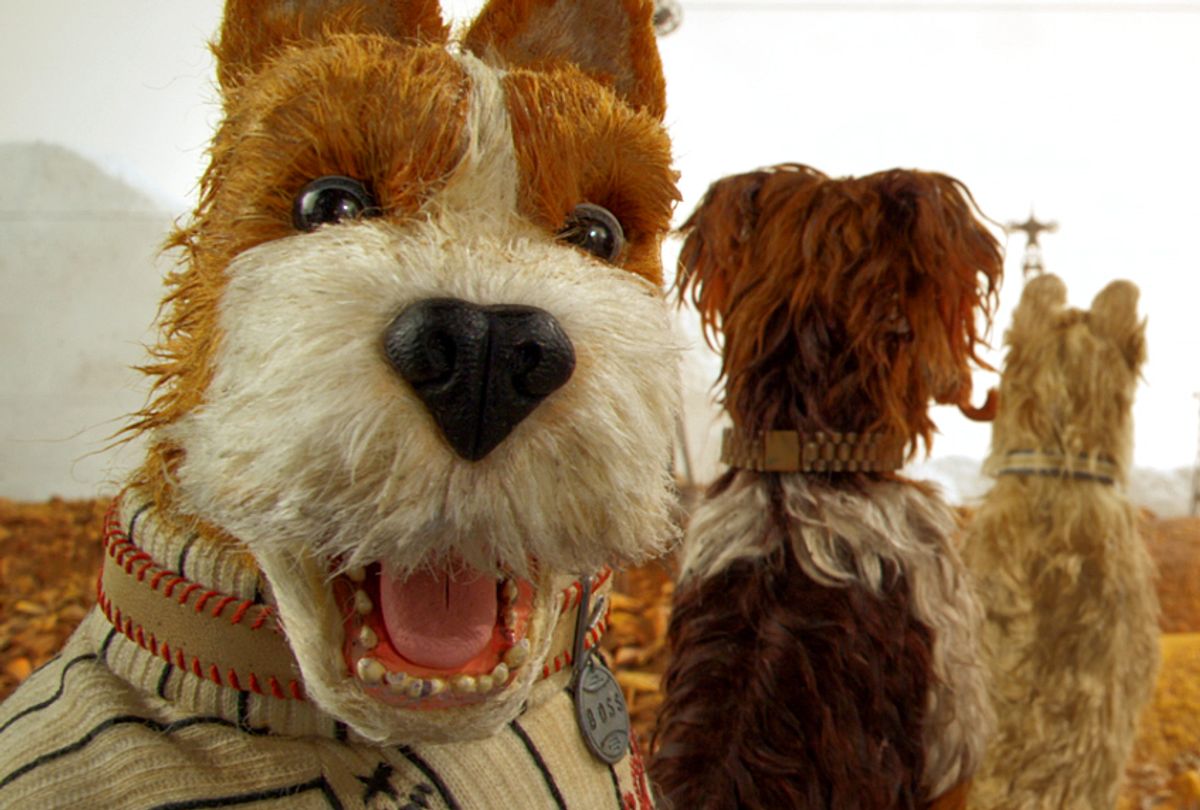 That Wes Anderson’s new, painstakingly animated fable “Isle of Dogs” makes its world premiere bow at the 2018 Berlin International Film Festival feels utterly appropriate. As any visitor to the German capital can attest, Berlin is — charmingly or not, depending upon one's taste — a demonstrably trashy city: marked by graffiti, grime and the lingering funk of history. Robust attempts at modernization fail it. Berlin’s sleaziness exceeds such beautification efforts, like pungent garbage-water seeping through the topsoil of a park built over the rubbish heap of history. Also: There are lots of dogs here. Dogs off-leash. Dogs in bars. Dogs loosed, and loosing themselves, across the endless tracery of narrow alleyways and uneven cobblestone sidewalks.

“Isle of Dogs” draws together these two closely associated tropes: dogs and trash. It’s a near-futuristic story set in a Japanese metropolis called Megasaki, where the leader of a cat-friendly dynasty banishes sickly dogs to a garbage dump to forage, languish and die. A tale of survival, yes. But also of hope and derring-do, in the form of 12-year-old canine savior Atari Kobayashi (Koyu Rankin), who crash-lands on the titular island to find his deported guard dog, Spots (Liev Schreiber).

At first glance, the film is familiar, cutesy-poo Wes Anderson territory, with a cast of big-ticket actors (including Bill Murray, Bryan Cranston, Edward Norton, Tilda Swinton and Jeff Goldblum) giving voice to adorable, if many, canine maquettes. Yet unlike Anderson’s previous, slightly-too-precious foray into animation, the 2009 Roald Dahl adaption “Fantastic Mr. Fox,” there’s more to “Isle of Dogs” than the whimsical antics of some anthropomorphized stop-motion animals.

In Disney’s classic “The Lion King,” the mighty Mustafa schools his son Simba on the so-called “Circle of Life,” a process of harmony and balance in which animals eat other animals, die, fertilize the earth, repeat. Straightforward (even stupid) as it is, the concept slipped into the pop culture lexicon. Elton John wrote a whole song about it. “Isle of Dogs” looks past this reductive cycle, forcing us to consider the niggling remainders. What happens to the trash, the refuse, the cast-offs? What happens when the circle of life cannot hold?

Like an inverted image of “The Lion King” — or other animated nature fables, like the Japanese sagas of Hayao Miyazaki to which Anderson’s film feels obviously indebted — “Isle of Dogs” imagines a world in which humanity’s harmony with nature has been ruptured, in which the circle has been cleaved and we are left to live among tightly compressed cubes of garbage. Where other films (Pixar’s similarly garbage-obsessed “WALL-E” comes to mind, as does Mike Judge’s doofus-dystopia “Idiocracy”) would rush to condemn such filthy, littered landscapes, “Isle of Dogs” strives for something more elegant. It forces us to imagine a way to live among the trash heap, to navigate the wasteland.

It’s here that the film’s focus on canine companion animals feels historically apposite. Dogs, some anthropologists have shown, were originally domesticated tens of thousands of years ago, when feral wolves were drawn to the garbage dumps left outside the earliest human encampments. Man’s waste became their reward. Dogs scavenged the scraps left behind by humans, and warmed up to them in kind. Think of it as an early form of dumpster-diving, or a Neolithic composting program. So began a historically rich and rewarding symbiotic relationship, not only between human- and canine-kind, but between man, dog and trash.

Like any great parable, “Isle of Dogs” feels timeless. Yet its barely futuristic trappings, and its excruciatingly detailed images of a modern metropolis that banishes its unwanted things (food waste, rubbish, sickly mongrels) instead of dealing with them, offers a resounding lesson. As Atari travels across the canine-garbage enclave, Anderson takes us back in time, depicting a trail of not just waste but whole bygone social and economic structures (cracked nuclear reactors, power plants destroyed by tsunamis, industrial-age mills and smokestacks). The expansive island garbage dump is a last resting place for the remnants of the past, for history itself.

It’s only by working alongside the resourceful canines (especially the reluctant stray Chief, voiced by Cranston) that Atari can find his beloved pet, mount a thorough counterattack against the tyrannical, dog-hating Mayor (Kunichi Nomura, who also conceived the story with Anderson, Jason Schwartzman and Roman Coppola), and clean up Megasaki. In so doing, he also pushes back against the lingering environmental apocalypticism, with threatens to engulf the world like a massive garbage landslide.

Aristotle dubbed the ancient Greek cynic philosopher Diogenes “The Dog,” because he idolized the animals for their candor and honesty, for the way they openly begged for scraps and barked at scoundrels. “Isle of Dogs” similarly admires canines; for their guilelessness, yes, but also for their compassion — their desire to risk themselves for their human companions. If Wes Anderson’s films have always been about finding families and communities outside the traditional bosom bonds, then “Isle of Dogs” offers the fullest explanation of this idea yet. It invites us to imagine a future in which humankind can form meaningful relationships across the boundaries of species.

In an age of seemingly imminent environment disaster, where our own colossal output of garbage feels unmanageable by traditional means of dumping and forgetting, “Isle of Dogs” genuinely buoys the spirit, without feeling sickly sweet or at all saccharine. It may well be too late to return to the transcendental harmony hinted at by “The Lion King” and the “Circle of Life.” But we may yet find the courage and inspiration to live productively in this vast wasteland of our own design. Maybe we just need to look — like Atari, like Diogenes, like anyone who has ever seen something of their humanity reflected back in the eyes of a companion-species — beyond ourselves. We should be so lucky as to see our future go to the dogs.