Bibi's downfall: Is the most dangerous man in the Middle East done for?

Benjamin Netanyahu has set Israel, and the entire Middle East, on a path toward doomsday. Will his fall matter? 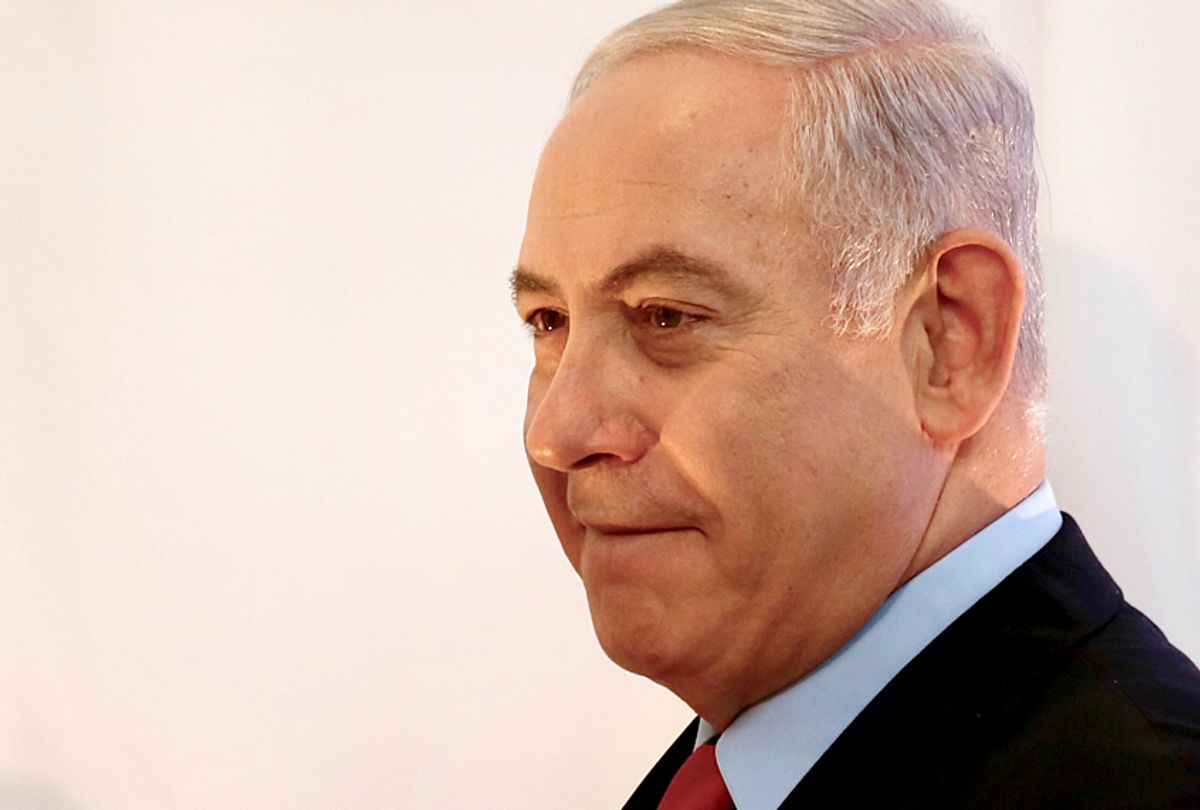 The political future of Benjamin Netanyahu is at last in doubt. With the Israeli police report recommending criminal charges against the prime minister, issued last Tuesday, the most dangerous man in the Middle East, as I have long called Bibi, may finally be forced from office. One could hardly be more pleased at the prospect.

But let us not fall into the trap of reducing politics to personality: Pushing aside a single objectionable figure rarely resolves crises that are at bottom systemic. Israel without Netanyahu: Yes! Israel as a fundamental impediment to peace in the Middle East: Still yes, Bibi or no Bibi. Israel as a chauvinist nation intent on inflicting a form of apartheid on the Palestinian population: It does not now appear likely that Netanyahu’s departure, if it comes to be, will be enough to pull Israel off this path. The man whose political life is now threatened has done too much to consolidate it.

Allegations of graft have trailed Netanyahu like a tin can on a string since his first term as prime minister, from 1996 to 1999. They now crystallize for the first time in the Israeli police report. It identifies two cases wherein there is sufficient evidence to prosecute the Israeli leader for fraud, bribery and breach of public trust. In one case, much written about at the time, Bibi is accused of conniving with a right-wing publisher to slant press coverage. The other case seems to be a straight-out matter of cash for influence: The police allege Bibi has accepted roughly $280,000 in gifts and illegal payments over the past decade. This is what the police just told prosecutors can be proven. Given how often Netanyahu has had to parry accusations of corruption, one imagines a lot more money may have changed hands during his two separate terms in office.

It goes without saying that Bibi continues to insist there is nothing to the allegations now officially lodged against him. And that he deserves due process as much as anyone else in judicial systems that are at least notionally sound. Avichai Mandelblit may take several months to determine whether or not to authorize prosecution. In the meantime, the attorney general talks of “turning over every stone to bring the truth to light.”

This is where things stand at the moment. If Mandelblit decides to put Bibi in the dock, he will be the first sitting prime minister in Israeli history to face criminal charges. Not by much: Ehud Olmert, who served as prime minister from 2006 to 2009, announced his resignation shortly after the police recommended charges similar to those Netanyahu may now face. Olmert went to prison, but he stood trial only after stepping down. Netanyahu shows no sign of similarly surrendering office. “I do everything with only one thing in mind — the good of the state,” Netanyahu said when the police report was issued. “Nothing has made me deviate, or will make me deviate, from this sacred mission.”

This brings us to the core of the matter.

I am hardly alone in noting that prime ministerial corruption has not been the true topic among Israelis as the police have built their case. The true topic — the topic beneath the topic — is that “sacred mission” Netanyahu insists is his to fulfill. This consists of his highly aggressive national security policies — notably his incessant hostility toward Iran and his apparent determination to further destabilize Syria — and his seldom-withheld dispensation of expanded settlements in the West Bank.

In both cases Netanyahu has taken Israel to extremes we may be able to term unprecedented. This reflects a drastically rightward drift in Israeli politics evident during Netanyahu’s prime ministerial years. Many are the observers — Israeli and non-Israeli and of numerous political stripes — who think Bibi has (1) recklessly jeopardized Israel’s medium- to long-term existence, (2) cynically cultivated the violence and disorder that has long plagued the Middle East and (3) pitilessly pushed Palestinians from a condition of de facto statelessness toward de jure apartheid.

I am among these observers. Not since Menachem Begin in the 1970s and 1980s has Israel been led by so extreme a figure.

I first suggested Netanyahu was the Middle East’s most dangerous man in this column five years ago. The 2013 session of the U.N. General Assembly (UNGA) had opened, and there was much talk of negotiations to achieve an accord governing Iran’s nuclear programs. Things had taken a highly positive turn with the election earlier that year of Iranian President Hassan Rouhani, a reformist and an intellectual in the mold of Mohammad Khatami, who served as president from 1997 to 2005. Rouhani was to address the UNGA. So was Barack Obama. And so was Netanyahu. It was a moment one recalls vividly.

Rouhani spoke movingly, extending a hand of reconciliation such that he stirred the whole of his UNGA audience. Obama bobbed and weaved in the way of American presidents: Sometimes one could not tell what he meant and often whether he meant what he said. Netanyahu, on the other hand, was perfectly clear. An agreement with Iran was a pact with evil itself, Bibi asserted. Israel would do all it could to block any such pact. He then came forth with a set of cartoonish images supposedly proving how close Iran was to building a nuclear weapon. They proved as much as the photographs Nikki Haley, Trump’s U.N. envoy, likes to shuffle before the Security Council like cue cards: nothing.

Negotiations with Iran began later that year, of course, and the nuclear accord was signed two years after that. But Bibi kept his word in the matter of his vigorous opposition. His obsession with Iran and his distorted renderings of its intentions continue. His determination to keep Arab neighbors too disorderly to articulate foreign policies should be plain to anyone who looks. So I hold to my assessment as to the perils of Bibi’s presence as Israel’s PM. His fixations and compulsions are dangerous. It will be well if the Middle East and the rest of us see the back of him.

But now I must qualify this judgment. I mean this two ways.

I recently published an interview conducted at year’s end with Richard Falk, the scholar, international lawyer and advocate of the Palestinian cause. I asked him midway, “Should we look at Netanyahu as a break or radical swerve in the history of Israel? Or is he just another Donald Trump act — simply saying what was meant all along but hidden?” Falk’s reply speaks for itself.

“I think he’s more opportunistic and more cynical than some of the earlier Israeli leaders,” Falk said. “But it’s the mainstream of what I would say was the conservative Zionist line of continuity from the beginning.” Falk went on to explain the fate of Palestinians as baked into the cake from the start: “The Zionist movement had to expel the Palestinians to be Jewish and democratic. Once you expel them and don’t let them back in, you’ve created an apartheid structure, because you’ve subjugated the people whose country it was.”

A couple of nearby comparisons will suffice to make my point. Many of us were shocked that cold March evening in 2003 — how well one recalls it — when we watched in real time as the U.S. invaded Iraq. Many of these many blamed George W. Bush, but the ire was misplaced: It was not Bush II who deserved our contempt, or not him alone. This was another chapter in American policy unfolding. The continuity was not to be missed. It is the same with Donald Trump: Odious man, yes. Dummkopf on many or most occasions, yes. But Trump is consequence, not cause. Various systemic crises combined to put him in office.

So it is with Netanyahu. He has done great damage, and one hopes someone even modestly more constructive replaces him if he succumbs. But the field of aspiring successors is notably thin, as you may have noticed. So far as one can make out, the best of them may merely moderate the pace and harshness of the direction Netanyahu has set. Again, it is likely to be another question of continuity.

It is time also to expand my characterization of Bibi. His dangers now extend far beyond the Middle East.

The undue influence on American politics of AIPAC, the Israeli lobby in Washington, is by now widely understood. But Netanyahu has pushed this envelope much further. Netanyahu knows how to take full advantage of the “unconditional support” that lies at the core of U.S. policy toward Israel. Think about it: In consequence of this commitment, Americans are complicit in the full succession of Israel’s breaches of international law — in the West Bank, Syria and elsewhere — as these have escalated markedly under Netanyahu. Israel’s everyday inhumanity toward Palestinians is effectively ours. Are we to be required to accept that such behavior is representative of us?

Bibi has arguably done as much as anyone to advance the boycott, divestment and sanctions campaign in the U.S. and elsewhere, and his fear of the potential effectiveness of BDS is plain. The Knesset recently passed a law making support for the campaign a crime. This spreads steadily to the U.S. (and Europe, I might add). Two dozen states now have laws on their books making it illegal even to criticize Israel, to say nothing of participating in the BDS campaign. At the federal level, there is legislation in the Senate that would make anyone who does business of any kind with a BDS supporter a criminal. The penalties under consideration are fines of up to $1 million and prison sentences of up to 20 years. These measures were reportedly drafted with AIPAC’s assistance.

Is there any indication that this drift toward the internationalization of Israel’s increasingly undemocratic domestic restrictions is going to abate if Netanyahu is forced from office? I see none. Freedom of association, anyone? Of speech?

To think back to the world’s intent when Israel was established in 1948 is nearly to weep at the outcome before us. The responsibilities have long been ours. Netanyahu has made the dangers ours, too.