They're raising awareness, and they're getting people on board 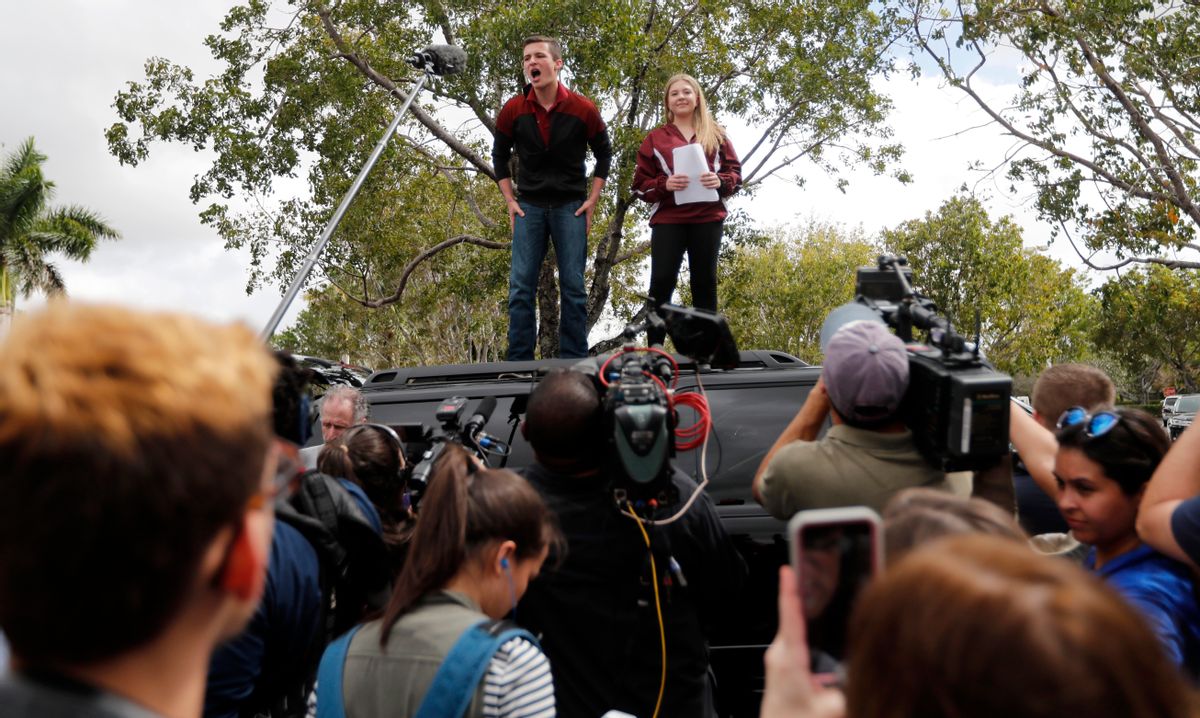 The survivors of the Marjory Stoneman Douglas High School Shooting on Valentine's Day have seemingly sparked a nationwide movement, leading the outcry for action to be taken on guns. Students have led the way with their composed voices and national television appearances. They have influenced students at other schools to take action as well, and have organized a massive march in the nation's capital next month.

At West Boca Raton High School on Tuesday, a protest and expression of solidarity ignited spontaneously after a 17-minute moment of silence for the 17 people murdered on Valentine's Day. Roughly 1,000 students refused to go back to class and instead ran into the streets and made their way to Stoneman Douglas,  12 miles away, the Miami Herald reported.

"Most of us got zeros on quizzes today," Lauren Smith, a 16-year-old student, told the Herald. "I don’t think we should have to do that to make a change, but we do. And it’s important that we do."

The walk out began after a handful of students stood on tables and issued chants.

"If you cannot use guns the right way, there shouldn't be guns at all," one student yelled, the Los Angeles Times reported. "We! Want! Change!"

"A lot of people look down on teenagers and think we're kids and can't have thoughts," Shelby Pierre, 17, told the Times. "But these protests made me realize my peers notice what's happening — they're not ignorant. We're all feeling the same thing. Seeing kids my age [at Stoneman Douglas] do that and get attention really makes me want to do more too."

But the movement is far from just local, as a handful of surviving students have established a de facto headquarters out of their parents' living rooms to coalesce and incentivize meaningful action. Stoneman Douglas students have announced a mass demonstration named, "March for Our Lives." It is scheduled for March 24, in Washington, D.C.

The whole country has taken notice of the students, who have chosen to turn a tragedy into a movement for action and resolve, including high-profile celebrity donors like George Clooney and his wife Amal Clooney, a human rights lawyer. The couple personally donated $500,000 to the march scheduled for next month, according to The New York Times. Clooney was joined by Steven Spielberg and his wife, Kate Capshaw, who matched their donation. Oprah Winfrey also matched the $500,000 donation and so did producer Jeffrey Katzenberg.

Meanwhile, as the movement has swept and inspired the nation, President Donald Trump and Republican lawmakers have made little effort to combat the nation's gun laws. Trump announced on Wednesday that he supported strengthening federal background checks but has not expressed any interest in changing gun laws.

In Florida, House Republicans already made that decision. A move to merely debate a piece of legislation that would have banned the sale and possession of semi-automatic weapons and high-capacity magazines, just like what was used in the shooting last week, was blocked by Florida's House Republicans on Wednesday.

The students looked on in dismay and disbelief from above.