Fred Rogers, champion of gentle masculinity, has a cure for the gun violence that plagues us 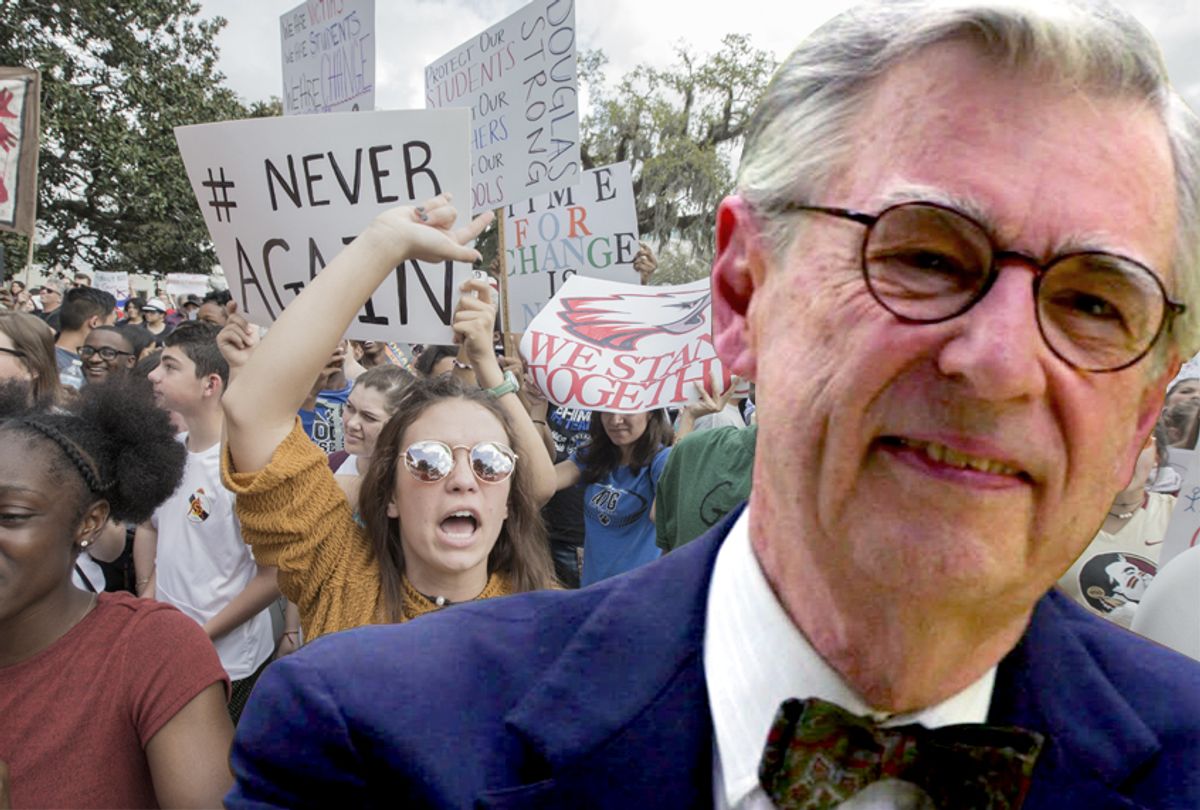 Like much of Generation X, “Mister Rogers’ Neighborhood” was a childhood TV staple. Even as I grew older and came to see the world both inside my home and beyond its front door as considerably harsher, Mister Rogers’ gentle affirmations remained steady and true. Thus I found myself watching the series long after I matured out of its target audience, probably because his central message was ageless. “‘You’ve made this day a special day, by just your being you,” he says at the end of every show. “There’s no person in the whole world like you. And I like you just the way you are.”

Interestingly, over the years I noticed that many of my male friends said they stopped watching the series soon after outgrowing the toddler stage. Some even professed to having a strange aversion to “Mister Rogers” that they couldn’t quite put their finger on and rarely watched, if ever.

In a recent conversation with David Newell, the man who played "speedy delivery" postman Mr. McFeely for the entirety of the series' 31 seasons, it finally dawned on me as to why it was: Fred Rogers was unwavering in his presentation of gentle masculinity.

The host of "Mister Rogers' Neighborhood" had a kind, soothing voice that never spiked in frustration or sagged with sorrow, even in episodes navigating such rocky emotional terrain as divorce, or death, fear or anger. He never roughhoused with guests or invalidated the observations of the children to whom he spoke. Above all, he celebrated the importance of feelings, the very thing boys are too often counseled to ignore or stifle.

“Fred was a gentle man, but he had a backbone of steel, you know,” Newell said. “You don't stay in television without that. It’s tough, tough business in children's television, with all the demands and the competition . . . that's tough because you have to raise money.”

On Monday "Mister Rogers' Neighborhood" marked the 50th anniversary of its national television debut after developing a local following on WQED in Pittsburgh. The day didn’t slide by without notice; a number of stories extolled the show’s legacy and mentioned lists of works and items commemorating Fred Rogers and his iconic PBS series.

There’s a PBS retrospective, “Mister Rogers: It's You I Like,” debuting Tuesday, March 6. The United States Postal Service is releasing a stamp featuring Rogers and King Friday XIII, ruler of the Neighborhood of Make-Believe, on March 23. The documentary “Won’t You Be My Neighbor” was a hit at Sundance, and is set for a wide release on June 8. Earlier came the exciting announcement that Tom Hanks is portraying Fred Rogers in the upcoming scripted feature "You Are My Friend."

And starting on Monday, February 26, PBS will feature back-to-back episodes of “Mister Rogers’ Neighborhood” paired with episodes of its popular animated spin-off, “Daniel Tiger’s Neighborhood,” that were inspired by its predecessor.  (Kicking off the event is “Daniel’s Fish Dies/Daniel’s Strawberry Seeds” and the memorable “Death of a Goldfish” installment of “Mister Rogers’”)

But if pop culture’s observance of this golden anniversary for “Mister Rogers” seems muted in comparison to full-throated celebrations of other TV series and films of lesser cultural import, it’s probably because the nation was once again caught up in processing its collective feelings.

“Mister Rogers’ Neighborhood” turned 50 four days after another mass shooting at a school, this time Marjory Stoneman Douglas High School in Parkland, Florida, left 17 dead and 14 others wounded. In the days following, a tide of sorrow alchemically transformed into a political anger that is sweeping through high schools nationwide. Students are assuming the mantle of leadership in a movement finding its momentum. And it flexed its might on Wednesday night during a CNN-hosted town hall in Sunrise, Florida.

Survivors of the massacre, their parents and an audience of local people took part in a heated and charged debate that featured Representative Ted Deutch, Broward County Sheriff Scott Israel, National Rifle Association spokeswoman Dana Loesch and Florida Senators Bill Nelson and Marco Rubio. Among that panel of officials, Rubio and Loesch took the lion’s share of the heat and notably, a significant critique against Loesch came from Israel — a law enforcement official.

You may be wondering what the fallout from the Parkland mass shooting has to do with a classic PBS children’s series turning 50. On the surface of it, maybe not much. But this forgets the entire point of “Mister Rogers’s Neighborhood” and the life’s work of its host.

Parkland and all the school shootings that have come before share many characteristics, but one that simply cannot be ignored is the fact that every single one was committed by a young man described as mentally ill, bullied or disconnected from others in some way.

These young men are the result of a culture that conditions our children to equate masculinity with the ability to lash out violently and the muting of emotional expression, the very ideas Rogers sought transform with his work and his presence.

I’m not alone in this opinion. Michael Ian Black, who currently stars in Comedy Central’s “Another Period,” penned an opinion piece for the New York Times in which he declares, “America’s boys are broken. And it’s killing us.”

Black cites an outdated model of masculinity as the culprit, “where manhood is measured in strength, where there is no way to be vulnerable without being emasculated, where manliness is about having power over others.”

“They are trapped,” he writes, “and they don’t even have the language to talk about how they feel about being trapped, because the language that exists to express the full range of human emotion is still viewed as sensitive and feminine.”

One day after that CNN town hall, I was reminded of Rogers’ testimony before the Senate Subcommittee on Communications in May of 1969. Footage of it exists on the Internet, and it’s mostly remembered as a potent and eloquent defense of public television’s continued importance as a public trust.

But the substance of what he says presses on the heart in light of the horrific tragedy in Parkland — and Sandy Hook, Isla Vista, Virginia Tech, Columbine, and every other mass shooting that came before.

“This is what I give: I give an expression of care, each day, to every child,” Rogers tells the senators. “. . . And I feel that if we in public television can only make it clear that feelings are mentionable and manageable, we will have done a great service for mental health.  I think that it’s much more dramatic that two men could be working out their feelings of anger — much more dramatic than showing something [with] gunfire. I’m constantly concerned about what our children are seeing.”

When the competition happens to be animated series whose stories hinged on heroes pitted in violent battles featuring explosions, guns and fistfights, surely his task did not become easier.

“Maybe the gentleness still speaks to boys, but it's not something they want to acknowledge,” Newell observed. “. . . I think that boys cover up that gentleness sometimes. It’s the culture that does it. And it’s wonderful for boys and girls to see a gentle man on television, instead of seeing the ‘Power Rangers’ at every moment.”

Suggesting that one television series or one person could have stopped or even slowed the surge of gun violence is naïve, I’ll admit. But how many gentle men dedicated to the emotional welfare of children do you see on television in the modern era?

How many series feature a live human dedicated to teaching kids the value of empathy and constructive ways to, as Rogers’ put it in one his songs, deal with “the mad that you feel”?

Television has not really responded to Rogers’ legacy by creating clones of “Misters’ Rogers Neighborhood” or finding other men like Fred Rogers. The closest a commercial channel came to doing so may have been the hiring of Steve Burns as the live-action host of Nickelodeon’s excellent series “Blue’s Clues.” He, too, is gentle . . . but the curious, animated blue pooch drew most of the attention.

Meanwhile, in the real world, the gun lobby has succeeded in buying off enough politicians to ensure that easy access to semi-automatic rifles continues to be prioritized over the lives of American citizens, including school children. And why would the average person who isn’t in the military of a member of law enforcement need an AR-15? For protection, the argument says.

The truth, however, is that these weapons boost the possessor’s sense of power. They are tangible tools of might and toxic masculinity and an opposing force to speaking softly while being firm. Children learn about guns at an early age, come to associate them with manliness and, as such, covet them. This was true before “Mister Rogers’ Neighborhood” ever aired, and it remains true today.

What we haven’t seen, however, are other gentle men impressing upon young viewers at an early age — and boys in particular — that feelings are valid, that they matter and that they need to be expressed in a healthy way.

Before that Senate Subcommittee in 1969, Rogers recited the lyrics of his song about dealing with anger:

“It’s great to be able to stop when you’ve planned a thing that’s wrong,

and be able to do something else instead, and think this song:

And what a good feeling, to feel like this, and know that the feeling is really mine.

Know that there’s something deep inside, that helps us become what we can.

In that CNN town hall Robert Schentrup, whose sister Carmen was killed in the Parkland shooting, informed Congressman Deutch that Wednesday would have been Carmen’s 17th birthday. In a calm, measured voice, he asked whether the fact that lawmakers refuse to pass stricture gun control regulations, despite polls indicating the vast majority of Americans support such regulations, indicates that our democracy is broken.

Schentrup’s tone never grew strident; he remained steady and composed as he faced down renowned and powerful opponents. Another gentle man with a backbone of steel using that power to shift our world.

If, as Black says, America’s boys are broken, perhaps in the wake of this terrible moment we should renew our appreciation not only of “Mister Rogers’ Neighborhood,” but the brand of heart-centered masculinity Fred Rogers personified. Teach it to our children. Our lives and futures may depend on it.