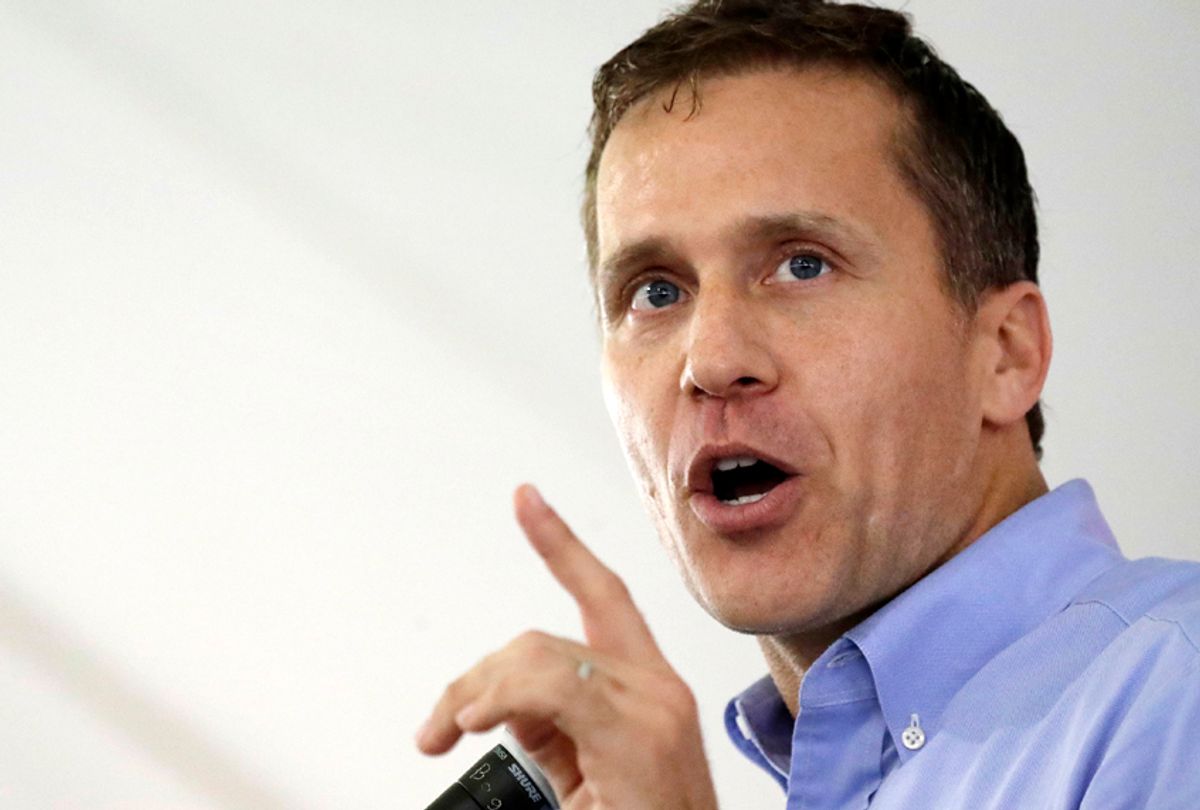 Missouri’s Republican governor was taken into custody Thursday after being indicted by a federal grand jury on one count of felony invasion of privacy charge stemming from a 2015 extramarital encounter.

St. Louis Circuit Attorney Kim Gardner announced in a press release that Gov. Eric Greitens allegedly took a photo of a nude woman, blindfolded and hands bound, without her knowledge on March 21, 2015, and then threatened to release the sexually explicit photograph.

The allegations first became public last month, after Greitens, a first-term governor who took office in 2017, admitted to a sexual relationship with his former hair stylist. Shortly after delivering his first state of the state address in January, local TV station KMOV released a partial transcript of a recording of the woman saying Greitens tried to blackmail her with the photo to keep her quiet about the relationship. Greitens is married with children.

The recording was provided to KMOV by the woman's ex-husband, who secretly taped her admission. The woman, who has not been named, told her ex-husband, "he used some sort of tape, I don’t what it was, and taped my hands to these rings and then put a blindfold on me … I didn’t even know. I feel like I don’t even know. I was just numb."

But after opening an investigation into the allegations last month, Circuit Attorney Kim Gardner said on Thursday that “the Grand Jury has found probable cause to believe that Governor Greitens violated Missouri State Statute 565.252, which was in place at the time of the violation." As Gardner explained of the indictment, “this statute has a provision for both a felony and misdemeanor.” Because the photo was taken "in a place where a person would have a reasonable expectation of privacy, and the defendant subsequently transmitted the image contained in the photograph in a manner that allowed access to that image via a computer,” Greitens was charged with a felony. “The law makes it a felony if a person transmits the image contained in the photograph or film in a manner that allows access to that image via a computer," Gardner explained.

The penalty for first-degree invasion of privacy in Missouri is up to four years in prison.

Greitens, who ran for office in 2016 on a family values platform, has repeatedly declined to answer direct questions about whether or not he took any photos of the unnamed woman. On Thursday, his lawyer told local news outlets that the charges against the governor were “baseless and unfounded.”

Officials confirmed to the St. Louis Post-Dispatch that Greitens was taken into custody and then booked at the St. Louis Justice Center on Thursday. He has since been released on his own recognizance.

Greitens can pardon himself because Missouri limits pardon power to post-conviction. He likely will not make it that far, as some prominent Republican lawmakers in Missouri were quick to react to news of his indictment by calling for his resignation, the New York Times reported.

His wife, Sheena, released a statement shortly after Greitens admitted to the affair, saying that she had already forgiven him and asked others to forgive him as well.

“We understand that there will be some people who cannot forgive—but for those who can find it in your heart, Eric asks for your forgiveness, and we are grateful for your love, your compassion, and your prayers.”

Only hours before he was indicted on a felony charge, the Republican Governor's Association proudly boasted about Greitens' character.