Former Ukrainian president Viktor Yanukovych had one rival locked up and may have poisoned another. Trump's dream? 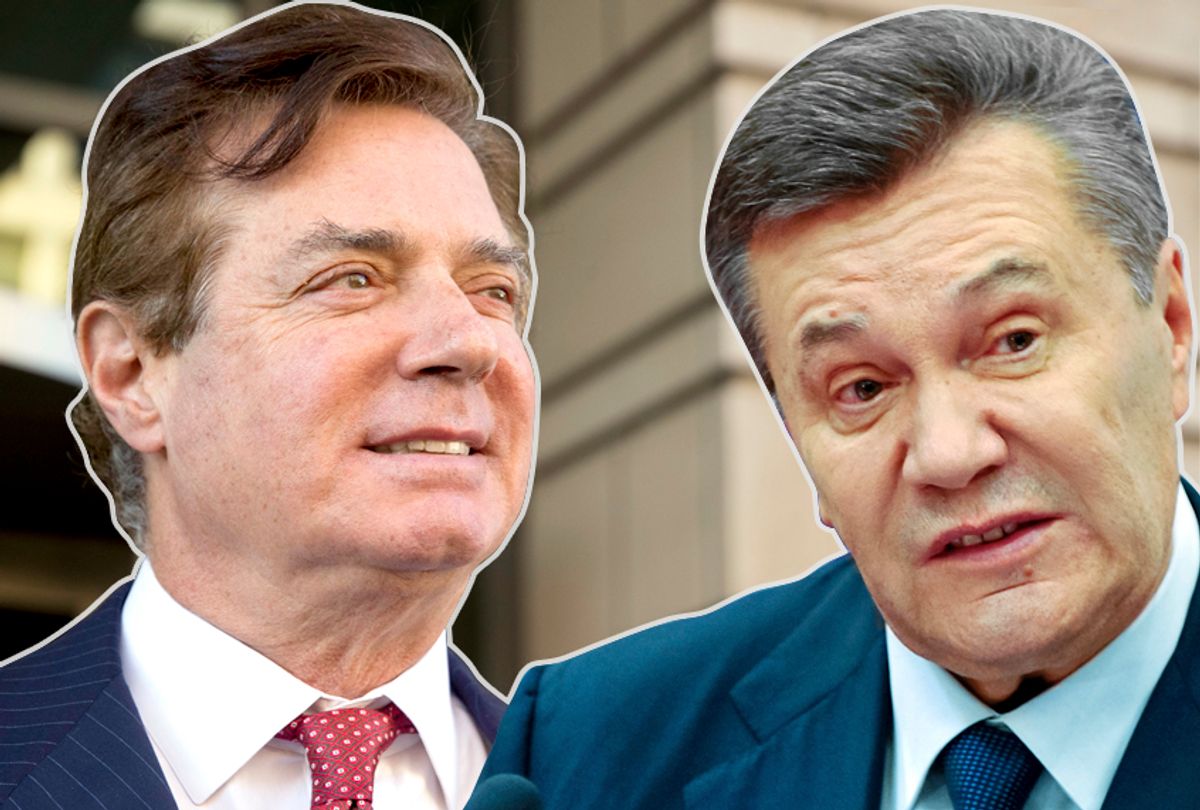 On Wednesday morning, "Fox & Friends" must have featured something that particularly annoyed Donald Trump during his "executive time." The president had one of his frequent Twitter tantrums, tweeting that Attorney General Jeff Sessions should investigate Barack Obama for failing to stop the Russians from meddling in the 2016 campaign and should also go after other unnamed "Dems" for "their crimes," whatever they may be.

Of course, Sessions has recused himself from the Russia investigation, as Trump knows all too well. And this is the same candidate who publicly begged the Russians to release hacked emails and effusively praised WikiLeaks dozens of times during the last weeks of the 2016 campaign. So accusing Obama of behaving irresponsibly regarding Russian interference is beyond hypocritical.

It's hard to know exactly what set Trump off, but it's possible he saw a segment on the new charges by special counsel Robert Mueller's office against a lawyer named Alex van der Zwaan over some phone calls and other communications with Rick Gates, Trump's former deputy campaign manager and a close associate of Paul Manafort. It's always tempting to think that Trump is just too stupid to understand the danger he's in with the Mueller investigation, but this one might have set off some alarms, since these charges refer to a time when Gates was still with the campaign. But who knows? Trump might just have had too many Diet Cokes and got worked up talking to Sean Hannity on the phone.

Still, Trump should probably be a little concerned about this latest business with Gates, and with the new reports of a possible charge against Manafort asserting that he tried to sell White House jobs in exchange for personal loans after the election. Manafort had been fired in August of 2016, so he wasn't an official member of the campaign at that time, but he was often seen coming in and out of Trump Tower during the transition. According to Politico, Manafort was advising the Trump team on how to handle the Russia probe. CNN reported at the time:

Paul Manafort has reemerged as a player in the fight to shape the new administration . . . after resigning under pressure as the chairman of Donald Trump's campaign this summer.

Manafort solidified his ties to the incoming White House when Trump selected Vice President-elect Mike Pence as his running mate in mid-July. Both men are Capitol Hill veterans: Manafort as a lobbyist and Pence from his time as an Indiana congressman, with strong ties to the Republican establishment.

Recall that it was Manafort who engineered the choice of Pence in the first place, by manipulating Trump into dropping his first choice, New Jersey Gov. Chris Christie.

According to the Daily Beast, Rick Gates was also still visiting the White House last spring, usually accompanying Trump's good friend Tom Barrack, the man who brought Manafort into the campaign in the first place. Until now the White House has been able to say that Manafort and Gates' legal problems stemmed from their activities years in the past and had nothing to do with Trump. That excuse looks as though it isn't going to hold.

Rachel Maddow pointed out earlier this week that the indictment of van der Zwaan points directly back to the work Manafort and Gates did to clean up the image of their onetime Ukrainian client, the former president and authoritarian kleptocrat Viktor Yanukovych. That image was particularly tarnished after Yanukovych was accused of poisoning his political rival, Viktor Yushchenko, in an apparent assassination attempt during the 2004 Ukrainian election. Yushchenko survived and won that election, but required extensive medical treatment for facial disfigurement and chronic pain.

Manafort "helped" Yanukovych with his image at home and abroad for years, culminating in his 2010 campaign against another rival, former prime minister Yulia Tymoshenko. Yanukovych won that race narrowly and decided not to take any chances with Tymoshenko, and "locked her up" on trumped-up charges. (So to speak.) Manafort then hired van der Zwaan's white-shoe New York law firm to write a report exonerating his client of wrongdoing, which they dutifully did -- for a lot of money, dirtying their own reputation in the process. That corrupt sideline is apparently common among high-powered law firms, which is truly shameful.

Tymoshenko spent four years in prison before Yanukovych was driven from office when the Ukrainian people got tired of his  authoritarianism, corruption and loyalty to Vladimir Putin. Yanukovych fled to Russia and is now wanted for treason in his home county. Manafort was left with a boatload of debt.

As Maddow pointed out on MSNBC, if you wanted to hire someone to fix up the image of a crude, authoritarian demagogue for more civilized consumption, Manafort was your guy. He has worked with such tyrannical luminaries as Robert Mugabe of Zimbabwe, Jonas Savimbi of Angola and Ferdinand Marcos of the Philippines over the years. His company was known in D.C. as the Torturers' Lobby, a fact which doesn't seem to have cost him any dinner invitations. His latest client, Donald Trump, has declared that he loves torture and suggested that the U.S. should "take out" the families of suspected terrorists. He and his followers demand to this day that his political rivals be locked up and held accountable for their unspecified crimes. Of course Manafort wound up working for him.

If Trump indeed sees this latest news as a threat and wants to distance himself from Manafort's shady past, he really ought to stop acting like a tinpot dictator who constantly threatens his predecessor and his political rivals with criminal charges. That's the kind of thing that Manafort's previous clients were known for, and it really isn't a good look for a president of the United States, especially one who is caught up in a counter-intelligence investigation into foreign interference in his election.