Why we need black feminism more than ever under Trump

This political time calls for intersectionality 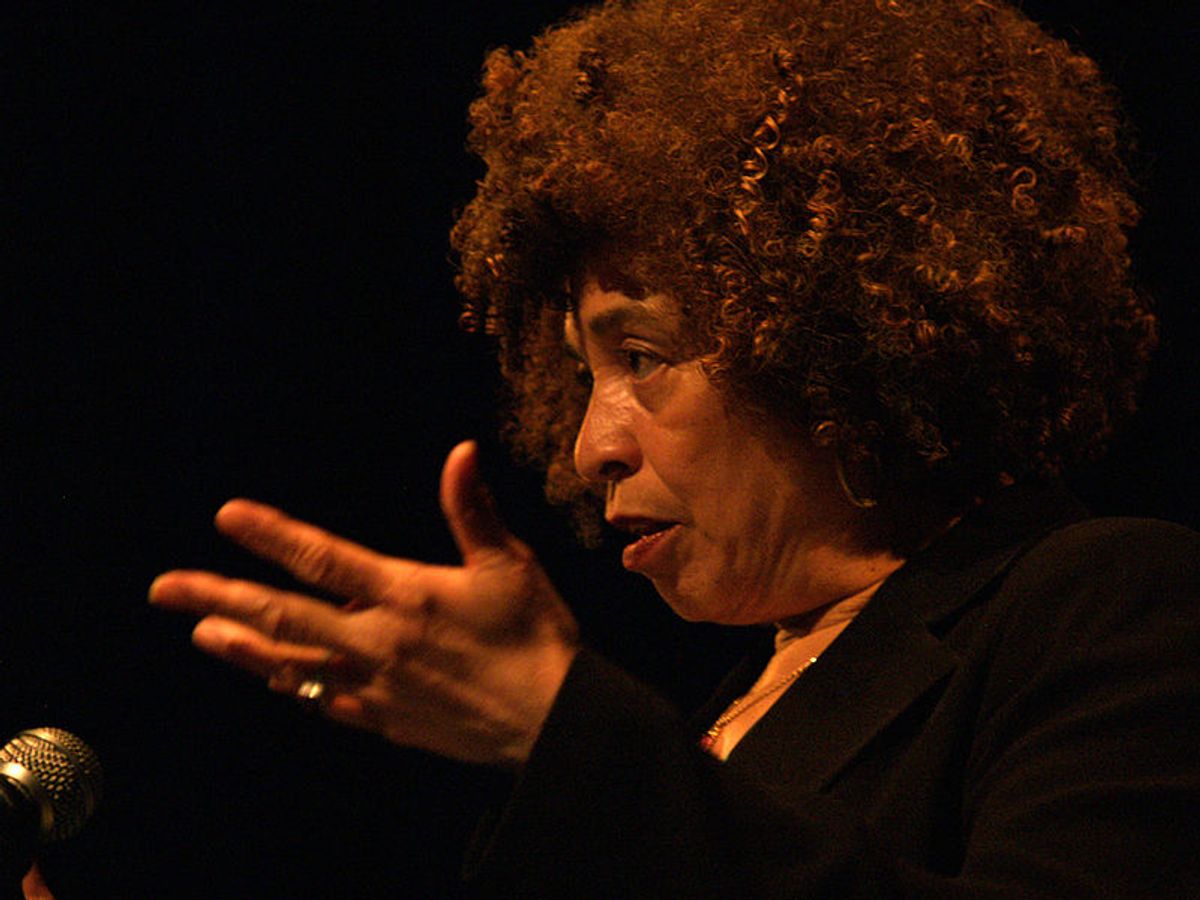 In April 1977, members of the Black feminist Combahee River Collective — named after Harriet Tubman’s 1863 raid in South Carolina to lead more than 700 enslaved people to freedom — published a document called the Combahee River Collective Statement. In this document, they made a case for understanding how racism, sexism, class oppression, and homophobia are all connected, writing, “If Black women were free, it would mean that everyone else would have to be free since our freedom would necessitate the destruction of all the systems of oppression.”

Over 40 years after the Combahee River Collective Statement, and as movements like Black Lives Matter and the Dreamers remind us, America is still failing to provide an equal playing field for all people. And when it comes to electoral politics, even “progressive” leaders too often leave out those whose lives fall at the intersections of discrimination, such as poor Black women or undocumented LGBTQ youth. Under the Trump administration, these groups are meanwhile overtly targeted for discriminatory treatment.

But despite the continued abuses against marginalized people in 2018, it’s important to remember that Black feminist thinkers and activists have been dreaming and fighting for nuanced solutions to systemic oppression for several decades.

Standing in sharp contrast to a modern version of “trickle-down” social justice where those with the most power have their interests addressed first, the Combahee River Collective instead argued the reverse: that those who are most marginalized and disenfranchised in society should be centered, and through lifting up the most disenfranchised, everyone’s standard of living would in turn improve.

The trickle-up approach provides, in many ways, a contrast not only to the Reagonomics that would follow closely behind, but also to the second-wave liberal feminist movement of the 1970s, which emerged as a movement largely focused on the needs of white, middle- to upper-class, heterosexual cisgender women. While this relatively privileged branch of the feminist movement failed to internalize various race-, class-, and sexuality-based critiques, iconic feminist movement builders like Audre Lorde, bell hooks, Angela Davis, Barbara Smith, Gloria Anzaldúa, and others built rich traditions that centered women of color, especially poor and working-class as well as lesbian and bisexual women. In 1981, This Bridge Called My Back was published as a foundational text for women of color feminism.

Acknowledging the need to center the voices of the most marginalized of women is what eventually spurred the creation of intersectional, or “third-wave,” feminism in the 1990s. In 1991, Kimberlé Crenshaw, a Black feminist legal scholar and pioneer in the field of critical race studies, coined the phrase “intersectionality” to describe the ways that social institutions perpetuate racism, sexism, classism, and so on in interlocking ways, exposing the perils of ignoring how individuals experience multiple forms of discrimination at once.

In her classic piece “Mapping the Margins: Intersectionality, Identity Politics, and Violence Against Women of Color,” Crenshaw discussed how attempting to help women through focusing solely on gender actually harms women who face discrimination based on other factors in addition to gender. Crenshaw provided a real-life example of a women’s shelter that sought to assist women fleeing domestic violence but which failed to consider the needs of women who couldn’t speak English, who were afraid to call the police on their undocumented partners for fear of being deported, and/or who couldn’t access the shelter using public transportation. Due to these oversights, this center for “all” women was, in reality, limited to a specific subset of women: English speakers, citizens, and women with the financial freedom to have access to a car.

Black, Latina, Asian, and Native American feminists have been grappling with complex questions about gender, race, class, and sexuality for decades — and, in their own lives, for centuries. And we know that when intersectional feminist leadership can be enacted in practice, it brings important changes about which issues are centered.

The Sylvia Rivera Law Project, for example, focuses on “increas[ing] the political voice and visibility of low-income people and people of color who are transgender, intersex, or gender non-conforming ... to improve access to respectful and affirming social, health, and legal services for our communities,” and they also specify on their website that “gender self-determination is inextricably intertwined with racial, social and economic justice.” In 2007, SRLP launched a report on the treatment of transgender women in men’s prisons, titled It’s War In Here, and are actively collaborating on multiple campaigns such as the Trans Health Campaign, Campaign for Alternatives to Isolated Confinement, and policy to ensure access to free menstrual products in New York women’s prisons.

Similarly,Black Lives Matter, which was founded by Black queer women, states on their website that they “affirm the lives of Black queer and trans folks, disabled folks, undocumented folks, folks with records, women, and all Black lives along the gender spectrum,” adding, “Our network centers those who have been marginalized within Black liberation movements.” Further, in the Dreamers undocumented youth movement, a 2015 study found that LGBTQ Dreamer activists “comprised a significant proportion of movement participants and [that] they were more civically engaged than their straight peers.”

Meanwhile, too often potential voters are parsed into simplistic, single-axis categories, as we saw in the media conjecture during the 2008 Democratic presidential primary about Black voters choosing Barack Obama and women choosing Hillary Clinton, never pausing to reflect on the idea that many voters are both Black and women. And we see it in the narrow politics of 2018, where Trump, known for his sexual predation and white supremacy, continues to aim mainly for the support of white working-class men.

White-dominated, ostensibly “progressive” feminism, on the other hand,continues to miss the mark on respecting and centering those women who arguably have the most to lose, such as women of color,transgender women, and trans women of color in particular.

S.T. Holloway, for example,writes about attending the 2017 Women’s March as a Black woman and why her experience there caused her not to attend in 2018: “[I]n a sea of thousands, at an event billed as a means of advancing the causes affecting all women, the first and last time I heard ‘Black Lives Matter’ chanted was when my two girlfriends and I began the chant,” she recalls. “About 40 to 50 others joined in, a comparatively pathetic response to the previous chorus given to the other chants.

“It represented the continued neglect, dismissal and disregard of the issues affecting black women and other women of color.”

We can see this disregard on the part of white women in their voting patterns today, from the 57% of white womenwho voted for Trump — as opposed to the 89% of Black women, 66% of Latina women, and 65% of Asian women who voted against him — to the 63% of white women in the 2017 Alabama Senate special election who voted for Roy Moore,an alleged serial pedophile who would be comfortable jettisoning Black Americans’ basic human rights under the 14th, 15th, and 24th Amendments, as well as women’s right to vote. In that same election,98% of Black women voted against Moore and his extremist racism and misogyny in favor of Doug Jones, turning a Senate seat in Alabama blue for the first time in 25 years.

It seems that although “sisterhood is powerful,” as the 1970 feminist anthology of the same name would proclaim, sisterhood that excludes so many of its sisters constitutes a failed revolution. Treva Lindsey, Associate Professor of Women’s, Gender, and Sexuality Studies at Ohio State University,argues in an op-ed for The Grio, “Black women show up and show out for candidates who rarely address our needs through tackling racial, gender, economic, and sexual injustice.” While the GOP, argues Lindsey, is more anti-Black and anti-poor than ever, even to the extent of publicly embracing white nationalism, “The Democratic Party [also] continues to largely ignore the specific demands of Black women while resting upon symbolic and empty gestures of inclusion and attempting to shore up more support among the white working class.”

Writes Lindsey, “Black women, and more specifically Black feminists, have been trying for over a hundred years to get white feminists to address the pervasiveness of anti-Blackness among white women and to proactively divest from and destroy white supremacy … The fact that damn near everyone benefits from our ‘voting’ except Black women speaks volumes about how we are marginalized even when we use our vote to push back against injustice.

“Until more Black feminists are in office and Black feminist policies are the status quo,” adds Lindsey, “we are doomed to repeat this alarming trend.”

If progressives want to retake Congress in 2018, which will also likely be the only way a Trump impeachment sees the light of day, they will, with humility and grace, need to embrace the contributions of Black feminism at the national level, not as a tokenizing move to win Black and brown votes but to understand and address the multi-faceted forms of injustice keeping so many people from living their dreams. Crucially, this injustice also keeps marginalized groups from going out to the polls, whether they’re physically barred from doing so or are too disillusioned to do so given the long history of empty promises from Democrats seeking to coax their votes.

Black feminists, and other feminists of color, have been strategizing around how to combat multiple forms of structural disadvantage for decades. It's time that existing (mostly-white, mostly-male) Democratic leadership finally study what they have to say, genuinely invite them to the table, and make room for a shift.