Anna Deavere Smith on "Notes from the Field": "I see this as a mating call" 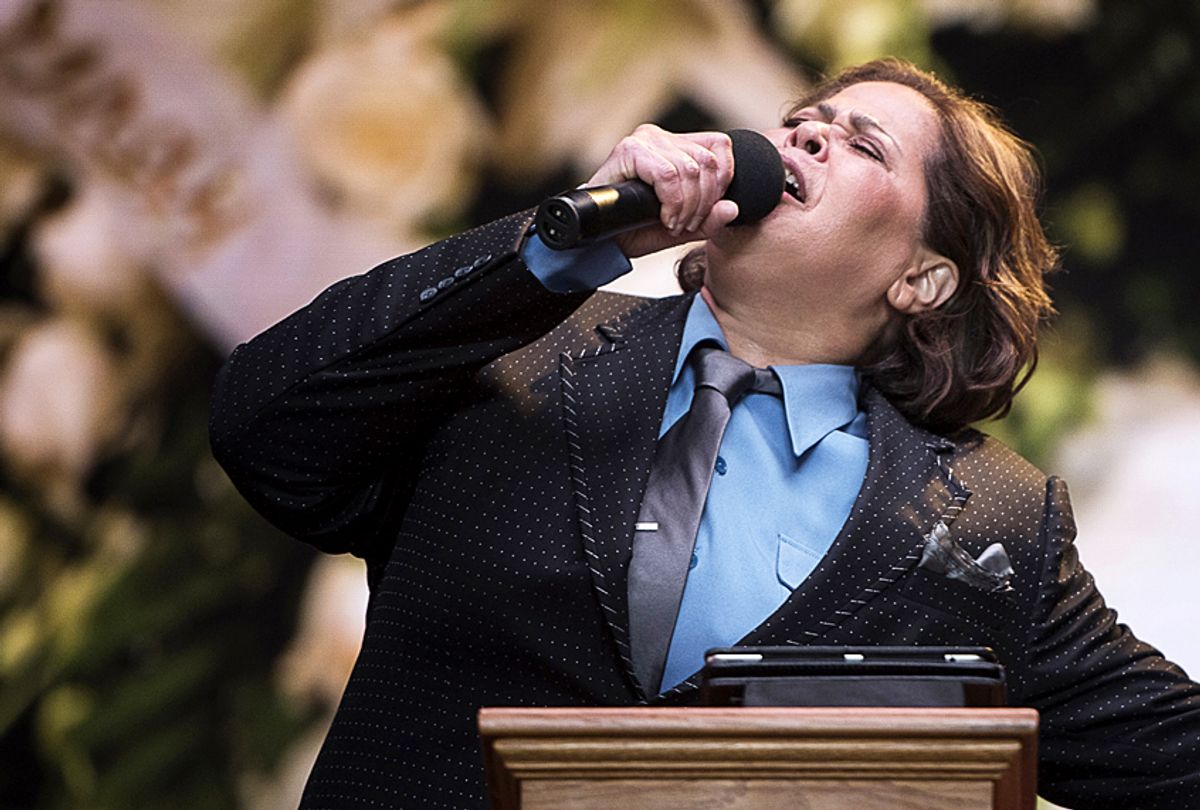 Anna Deavere Smith in "Notes from the Field" (Courtesy of HBO)
--

Take the nine days preceding the HBO premiere of Anna Deavere Smith’s “Notes from the Field,” for instance. They’ve been dominated by passionate debates about the fundamental right of children to be safe in their classrooms, inspired by the massacre in Parkland, Florida, that killed 17 people, most of them high schoolers.

Out of this terrible tragedy a student-led movement has been born to hold politicians accountable for their dedication to corporate values of the safety of their citizens, reopening the too-old debate about tighter gun regulations. It heated up considerably after the right wing preposterously suggested arming teachers as a viable solution.

Increased policing in schools also bubbled up yet again, despite study after study proving that such mandates disproportionately affect black students, and that their major achievement has been to accelerate the school-to-prison pipeline that pushes children of color, mostly poor, out of the classroom and into the criminal system.

The stage version of “Notes from the Field” opened in late 2016 at the American Repertory Theater in Cambridge, Massachusetts, transferring to Second Stage Theater, an off-Broadway venue in New York. But Smith began working on it in 2013, interviewing around 250 people and then picking fewer than 20 testimonials out of an estimated 300 hours of material yielded by her conversations.

This 90-minute piece, filmed by Kristi Zea and making its TV debut Saturday at 8 p.m., has been in the works for years. To Smith, who also teaches in the Department of Art & Public Policy at New York University’s Tisch School of the Arts, the exposure gained by presenting “Notes from the Field” on HBO is central to forwarding the discussion.

“I'm very interested in audience,” she told Salon in a recent phone interview. “And I could do this [onstage] for five years and accrue attendance, but the fact is, the theater isn't going to provide an audience as big as the one that television will.”

As a performer, an educator and an explorer of social issues, Smith’s passion for “Notes from the Field” to circulate is understandable.

With other documentary theater projects, some of the anecdotes collected years ago might have felt dated, like morsels from a recent past. The visceral “Notes from the Field” has the opposite effect, especially this week. Years may have passed between the project’s kick-off and its film debut, but Smith’s one-woman dramatization of stories told to her by students, parents, teachers and administrators could very well have been shared with her a few days ago.

As she’s done in previous works, her most famous being “Fires in the Mirror,” about the Crown Heights riot in 1991, and “Twilight: Los Angeles, 1992,” about the L.A. riots, Smith slips into the skins and souls of her subjects with ease and accuracy, changing one personality for another with the simplicity of unlacing an athletic shoe and stepping into a loafer.

And taken together, it can seem that these discrete documentary theater pieces are in something of a conversation with each other. But this, she assured me, is inadvertent.

“When I started working like this in the late ’70s, I was thinking about something called American character,” Smith said. “I was really trying to see if I could find American identity as an accumulation of speech acts because my grandfather had said when I was a girl, ‘If you say a word often enough, it becomes you.’ So I wanted to become America word for word. So it wasn't thinking in that very sophisticated way that you suggest.

“If they are talking to each other,” she added, “that is probably just an outgrowth of the fact that I am an artist who is learning something every time I go out there to make the work. I probably have become particularly sensitive to the ways that inequality manifests itself.”

In looking at the school-to-prison pipeline, Smith is telling the part of America’s story that shows an unseemly side of capitalism and our social structure. “I suppose [NAACP Legal Defense Fund president] Sherrilyn Ifill says it best in the very beginning . . . she's basically saying we make investments in this country. We're very conscious about doing them. And we're going to invest in schools, we're going to invest in prisons. Right now, we're investing in prisons.”

Witnessing Smith’s versatility unfurl as she singlehandedly carries each of the piece’s individual voices through an hour and a half, live onstage, is always extraordinary. Accompaniment provided by jazz bassist Marcus Shelby punctuates her words and, in many places, speaks directly to and harmonizes with the prose.

The scope of voices Smith captures is extraordinary, too -- Ifill and activist Bree Newsome are among the famous people she portrays, although the account of Rep. John Lewis, saved for the film’s ending, vibrates with a divine potency that takes an already masterful performance and allows it to soar.

The emotional heft yielded by the cinematic experiences of “Notes from the Field” is unexpected, though. Some of that feeling comes from viewing familiar viral clips life-sized and projected behind Smith as opposed to absorbing them as we’re used to, in a form shrunken to fit computer screens and handheld devices. This sounds like a small detail. But to see, for example, that 2015 video of a teenage girl in Texas pinned down in her bathing suit, in a scale that makes the cop with his knee on her back measure closer to their actual height, allows us to experience afresh the awfulness of the incident.

Smith, with genuine humility, acknowledges that one lesson she’s learned over years of engaging in this work is that the power of artists is limited. “I don't save lives,” she said. “but I believe that there are people in my audience who do. With this movie, I see this as a mating call. I'm looking for mates, I'm looking for policy people who want to use the movie in a meeting or a convention, wherever they are, to get something happening.

“I want people who write checks to write checks,” she added. “I want kids who see it who are rich in a rich school to see that this is happening elsewhere in their city, and want to do something about it. Poor kids to go through a period of grieving about what's happening to them, and they too need to move on from grief to action, from awareness to grief to action.”

She said this before the nightmare in Florida descended upon the news cycle, by the way. Something is happening. That “Notes” arrives just in time to speak to the horror is merely another tragic, brilliant brush of coincidence.