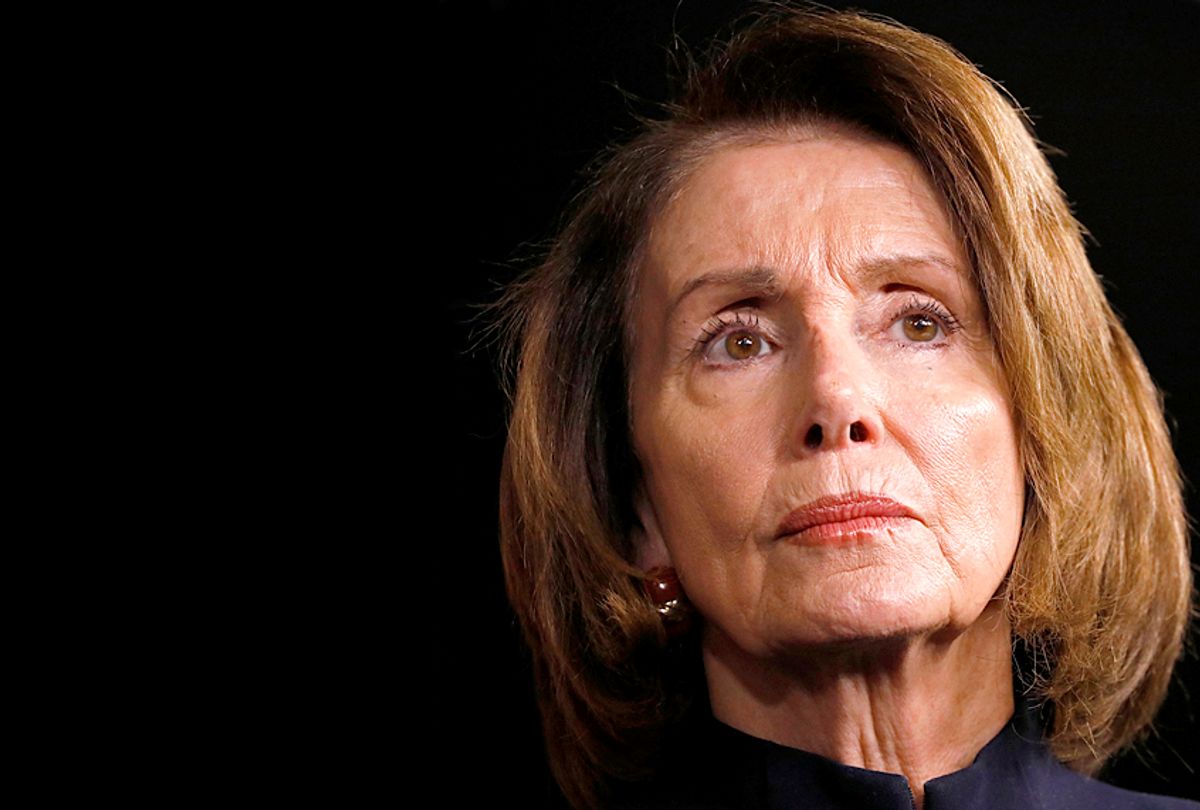 In a Thursday speech at the Conservative Political Action Conference, Vice President Mike Pence gave a preview of the message Republicans will push going into November’s congressional elections: Tax cuts are good and Nancy Pelosi is bad.

Republicans have run on tax cuts since Ronald Reagan’s heyday, of course, but they’ve been bashing the veteran House Democratic leader for almost as long. This year is the first time they’ve managed put both together into a single package, thanks to several comments Pelosi has made about the tax plan that the GOP passed in December.

Although the bill polled terribly before it passed thanks to its decided skew toward high-income taxpayers, Pelosi’s claims that the proposal would provoke a financial “Armageddon” and that the much smaller benefits the GOP law gives to middle- and lower-income citizens amount to “crumbs” has become a hot topic on talk radio and other right-leaning outposts. Pelosi first made the “crumbs” remark on Jan. 11 and has repeated it several times since.

“I don’t know if you heard — but the woman that wants to be speaker of the house again, Nancy Pelosi, said — she actually said the tax cuts would be Armageddon before they passed,” Pence said as he introduced the topic.

Most amazingly of all, she keeps saying that a $1,000 bonus for working Americans is nothing more than crumbs. Well, let me remind all of you, I come from the Joseph A. Bank wing of the West Wing of the White House. We had a term for another $1,000 in our paycheck at the end of the year. Christmas. ...

These bonuses have meant real money. They’ve helped working families all across this country with pay raises that are generating opportunities even as we speak. And I want to say from my heart, any leader who says that $1,000 in the pockets of working families is crumbs, is out of touch with the American people.

Given how energized Democratic voters are at the prospect of opposing President Donald Trump, there’s no guarantee this strategy can save the GOP's House majority. But there’s no question that Republicans are trying to extract every cent of political capital out of Pelosi’s “crumbs” remark, in the same way they did in 2016 with Hillary Clinton’s “deplorables” insult — and as Democrats did with Mitt Romney’s “47 percent” slur in 2012.

Seizing on an isolated incident of a prominent Democrat saying or doing something that could be construed as elitist has a very long history. And no wonder — it’s effective.

So effective, in fact, that Republicans have used the tactic in almost every presidential election since 1980. That year, Jimmy Carter was portrayed as an obsessive micro-manager who didn’t trust people with their own lives. Four years later, Walter Mondale was turned into a socialist who was mean to a nice old man who liked doing yard work.

In 1988, Michael Dukakis was transformed into a blue-blooded autocrat who couldn’t ride in a tank and wouldn’t get upset at the idea of his wife being murdered. That meme didn’t work in the 1992 race between Bill “Bubba” Clinton and prep-school blue-blood George H.W. Bush, but it was dusted off in 1996 as Bob Dole portrayed Clinton as a modern-day Caligula.

George W. Bush returned to the playbook in 2000, downplaying his Yankee brahmin ancestry in favor of portraying himself as a plain-speaking Texan running against pencil-necked rich boy Al Gore. Four years later, Bush doubled down on the concept, mocking John Kerry’s windsurfing as his surrogates highlighted the fact that the Democrat was married to a billionaire. (Kerry was also accused of looking “French,” whatever that was supposed to mean.)

From a broader standpoint, Pelosi’s claim that the Republican tax cut wouldn’t do much for regular Americans is unremarkable in itself. In 2009 and 2010, Republicans unanimously voted against a Democratic plan to send out modest tax-refund checks out as part of then-president Barack Obama’s economic stimulus package. At the time, conservative economists and GOP elected officials warned that the tax cuts were too targeted toward the lower- and middle-class to get the economy moving again.

In 2001, the Democrats’ Senate leader, Tom Daschle, argued that average people could only afford a muffler with the tax savings they’d receive under a Republican tax cut plan then under consideration. By contrast, he said, millionaires could go out and buy a new Lexus.

So one can argue that Pelosi's comment was accurate enough, and well within the bounds of normal political discourse. But at a time when the GOP is led by a self-styled “blue-collar billionaire” who has convinced millions of middle- and lower-income Democrats that he has their backs, her talk of “crumbs” was ill-considered at best.

Instead of admitting her screw-up and adjusting her messaging, Pelosi, who has an estimated net worth of $29 million, doubled down on her rhetoric, proving once again that while she is an outstanding parliamentarian, she isn’t a very good politician.

“Tax cuts at the high end. A banquet for everyone up here,” she said, using her hands to make marks in the air during a news conference days after her initial remark. “Crumbs for people down here. I’ll repeat that.”

Other Democrats with better-tuned political instincts have been quick to distance themselves from Pelosi’s tax-cut criticism.

“I would not describe it as crumbs,” Democratic National Committee vice chairman Rep. Keith Ellison told Business Insider. “The income inequality is so bad that if you could pick up 1,000 or 900 bucks, maybe it helps.”

Rep. Emmanuel Cleaver of Missouri was even more frank. “Language is important, and we have to be very careful that we don’t insult people by saying that the amount of money they get is crumbs,” Cleaver told Politico. “We cannot be seen as patricians.”

Rep. John Yarmuth, a Democrat from largely red Kentucky, was similarly concerned about Pelosi’s phrasing in an interview with the Washington Examiner.

“The approach has to be more big picture than personal, because you can’t tell people that are getting $200 a month more that that’s not good,” he said. “That’s big money for a lot of people.”

That several prominent Democrats have been willing to criticize Pelosi on the record suggests that her remarks are concerning to party members who have realistic hopes of taking back the House this year.

Sensing an opportunity, Rep. Todd Rokita, R-Ind., announced this month that he plans to introduce a bill called he’s calling the Creating Relief and Useful Middle-Class Benefits and Savings (CRUMBS for short) that would waive federal taxes on up to $2,500 in bonuses. Rokita is one of several Republicans competing to run against Sen. Joe Donnelly, one of the Democrats’ most vulnerable incumbents.

In a more significant move, a political action committee connected to House Speaker Paul Ryan made the “crumbs” comment the centerpiece of a TV ad that links Pennsylvania Democratic congressional candidate Conor Lamb to Pelosi.

“Being a widow is tough. Raising two teenage sons by myself is even harder," a woman identified as Mary Beth Cirucci says in the spot. “That’s why I really appreciated the middle-class tax cut.”

“Conor Lamb and Nancy Pelosi called it crumbs. Here’s the truth, Mr. Lamb,” she says. “When you’re a single mom and everything falls on your shoulders, every dollar counts.”

Given how much mileage Republicans have already gotten from this line of attack, the anti-Lamb ad won’t be the last one voters will see that talks of crumbs.

If the GOP can beat the current odds and keep control of the House this fall, you can bet Democrats won’t stop talking about Pelosi’s tin-eared remarks either.