AMC's "McMafia": From Russia, with reservations

It's a well-made series with a movie star lead, that nevertheless feels overly complicated and slow 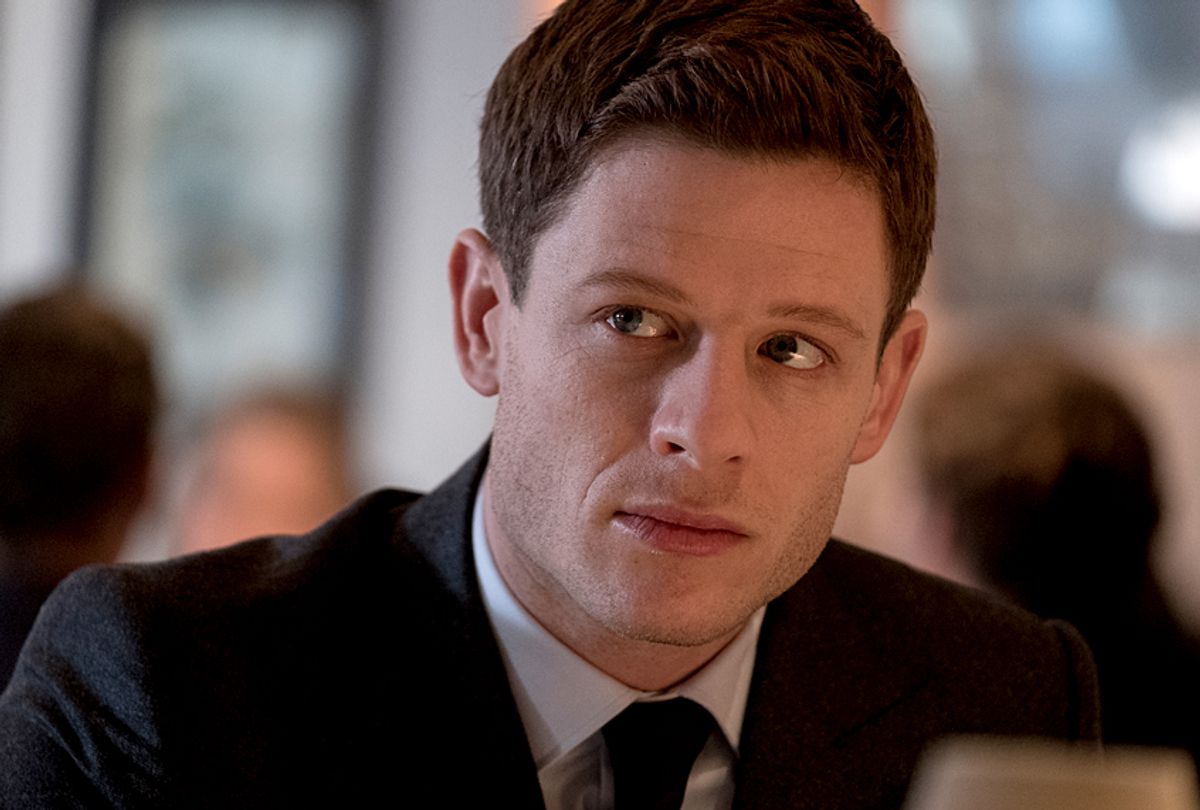 In early January, when “McMafia” made its U.K. debut, a number of critics thought of the series as James Norton's (of "Grantchester" fame) soft audition for the James Bond franchise. A pivotal moment in the first episode proves the merit in that argument, as he strolls into a room at an opulent gala. Norton wears the hell out of a tailored suit and confidently plays a man who keeps his chill in tense circumstances. Even as his character, Alex Godman, stands inches away from a man who wants him dead, he remains nonchalant. Alex and his adversary share caviar and exchange threats under a veil of politesse. Onlookers would never guess the two men were negotiating terms of peace, or war.

Here, the enemy is Russian and a mobster. Alex is Russian as well, although he'd prefer for others to see him as British; whether he's also the enemy, in a more universal sense, is the central conceit of "McMafia." At the beginning of the series, which debuts Monday at 10 p.m. on AMC, Alex insists to any criminals approaching him seeking a deal that he’s a banker, not a gangster. He's also the scion of a powerful family of Russian mobsters and wears danger too well to remain innocent for long.

“McMafia” strives to be several series in one: a crime drama, a family soap, a dramatization of current geopolitical ills. Its procedural aspect traces a lengthy connecting line from white collar business deals in major world capitals down through the many layers of organized crime bosses placed between themselves and their illegal enterprises. The plot spends a great deal of time in realms of supposedly lawful capitalism but displays little compunction when it comes to its unblinking displays of gutter-level terror and debasement. The connection to Russian organized crime provides a handy hook into current events, and in this era of worries over Russia's meddling in our politics and its oligarchs insinuating themselves into our nation's power structure, the deadly games these mobsters play feel much closer to home than they would in the past.

More than this, "McMafia" is one of the few high-profile dramas on television right now that thoroughly follows human trafficking from cause to effect, showing how one decision, enacted by the stroke of a keyboard button, can allow a world of horror to trap and swallow an unsuspecting young woman. Even this connects to the larger arc's time-tested marinade of old-fashioned vengeance. You cannot have a show about the mob without the personal getting in the way of business.

Truly, “McMafia” strives to incorporate many of prestige television's defining qualities: it's durably made, thoughtfully written and well-acted. It’s also . . . methodical, to put it nicely. Others might call it plodding. Few would watch the opening episodes of this series and describe the pacing as kinetic, though there’s enough going on plot-wise to make a person pause, if only to review the ways that various people connect.

There are a lot of figures to remember in this piece — a lot — many with their own stories to service and motivations to explore. Alex is merely the point man of a plot that plaits numerous character threads through its eight episodes, only a couple of which are spun tightly. As if all this wasn’t enough, the series parallels Alex’s dilemma with a looming war between Russian mobsters Vadim Kalyagin (Merab Ninidze) and Semiyon Kleiman (David Strathairn), a Russian exile who has set up his empire in Israel. Strathairn turns in an interesting performance as Semiyon, although occasionally his Russian accent recedes enough to remind the viewer that he's an American playing a Russian in a cast full of Russian-born actors.

Based on Misha Glenny’s best-selling book, “McMafia” begins with Alex in a place of willful if partially feigned ignorance; he knows of the myriad dirty deals his father Dmitri (Aleksey Serebryakov) made over the years that secured his family’s fortune. Instead, somewhat defiantly, he behaves as a model of assimilation. British-raised and Harvard-educated, Alex even refuses to speak Russian unless he must, part of his insistence on making his money more honestly as an investment banker. Meanwhile, Alex's mother Oksana (Mariya Shukshina) is deeply unhappy in her marriage and has a rocky relationship with his sister Katya (Faye Marsay).

Apart from the usual family drama, Alex’s life is moving along swimmingly as the series begins. His girlfriend Rebecca (Juliet Rylance) is beautiful, smart and upstanding in the extreme, working as an advisor to a wealthy “ethical capitalist.” Business at the office is humming along nicely, until the family business inserts itself into the workings of his hedge fund.

The navigational difficulty of “McMafia” is based in no small part on its reliance upon the audience to connect in a matter resembling intimacy with Alex. Simmering moral conflict within Alex is meant to create the hub of tension around which “McMafia” revolves, but that pot doesn’t quite boil down as the writers may have intended. Even so, Norton does his absolute best with Hossein Amini’s and James Watkins’ script, fueling his role with a combination of slick guile and the slightest air of melancholy as Alex soaks up the world of criminality.

With so many subplots to service and a story that rockets between Britain, Russia, Egypt, Israel and other countries, portions of Alex’s narrative development seem glossed over, even somewhat accelerated as the tale arcs to a predictable denouement. Despite this potentially confusing set-up, there may be enough here to keep the very, very patient viewer interested enough to follow the story through its eight-part run. Just in case the premiere doesn’t completely sell the series' audition, a highly likely outcome in this era of Too Much TV, AMC is making the entire season available to be streamed commercial free on AMC Premiere, an add-on service available via participating cable providers.