The long shadow of Churchill looms over Oscar night 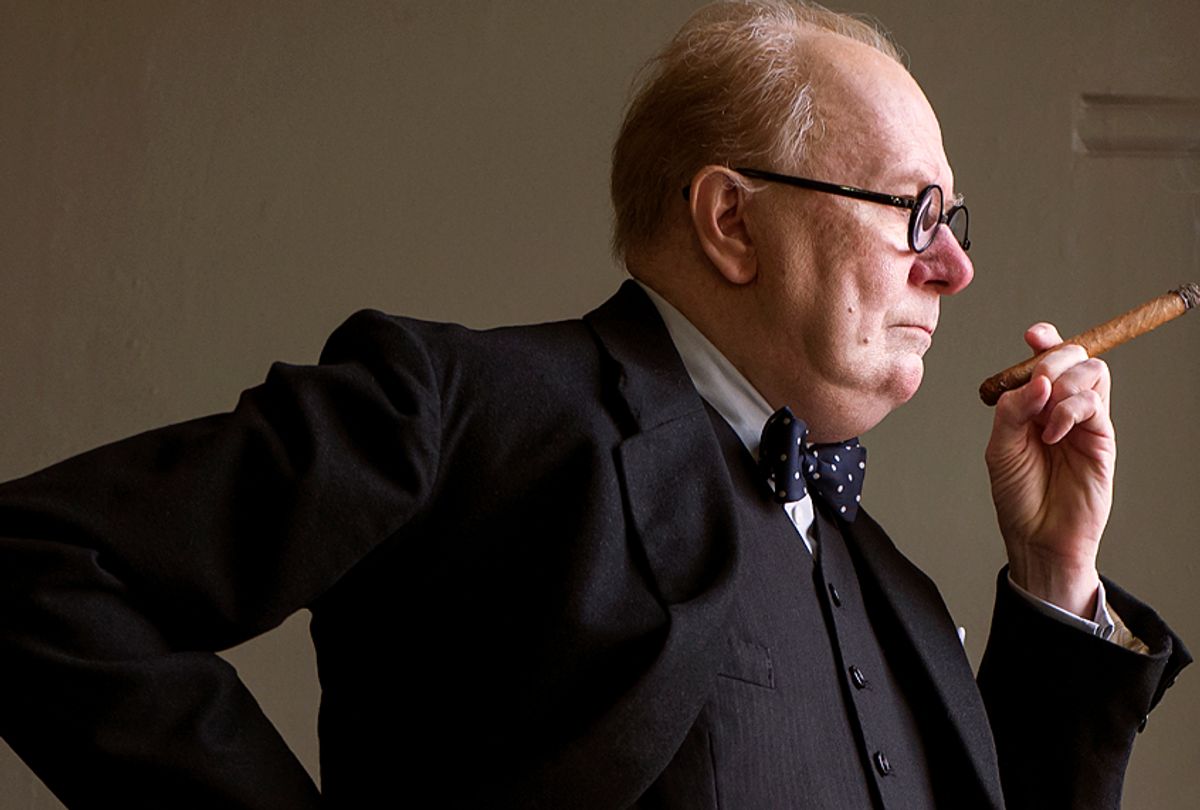 More than a statue, really: a whole vast, expansive shrine and cemetery, in Treptower Park, south of the city center, memorializing the thousands of Soviet soldiers who died in World War II’s decisive Battle of Berlin. Walking through the Soviet War Memorial is like walking into an imperial stronghold in a “Star Wars” movie. One turns past a statue of a weeping Mother Russia, passes through a panorama gateway of red granite emblazoned with Soviet flags, past stone sarcophagi, to a looming 40-foot statue of a Red Army Soldier (dubbed “The Liberator”), a broadsword in one hand, a German baby in the other, a swastika cracking under his heavy boot.

Seeing this spectacle stirs a serious feeling of mental disjoint. Here was a massive, imposing, quite literally awesome monument of heroism dedicated to an army that — given Stalin’s scorched-earth policy, civilian murders, and horrendous campaigns of sexual violence (with an estimated 100,000 women believed to have been raped during the battle and occupation of Berlin alone) — was anything but heroic, by any meaningful metric. And yet the lesson of the Soviet War Memorial is abundantly, terrifyingly clear. Even if you’re a Bad Guy, you can come off like a Good Guy, just as long as you beat the Worst Guy.

It’s a lesson that comes to mind in light of the success of the new film “Darkest Hour,” and in particular, Gary Oldman’s buzzy, award-winning turn as Winston Churchill. Oldman’s recent netting of Golden Globe and SAG and BAFTA awards for Best Actor (he is the clear favorite in the same category with oddsmakers to win this year's Oscars), have awakened controversy around the venerable 59-year-old character actor. Allegations of domestic abuse resurfaced, which developed an image of Gary Oldman as something of a “problematic fave,” given Hollywood’s ongoing reckoning with abuse, sexism and the tyranny of powerful old white men.

Serious issues, to be sure. Yet the fog of doubt cast over Oldman’s character, in its way, works to occlude another problem of “Darkest Hour” — the persisting hagiography of Winston Churchill himself. When, following Oldman’s recent Screen Actors Guild win for playing the British PM, people began tweeting stuff like “We need a Winston Churchill right now!” The skeptical and historically circumspect may be forgiven for wondering, “Do we?”

First things first: Winston Churchill was essential to winning World War II and saving Britain from the grips of Nazism. He was also, as “Darkest Hour” makes clear, one of the few people to fully comprehend the severity of Hitler’s military threat. For this alone, he likely deserves the title of Great Liberal Hero of the twentieth century, if not the whole of human civilization. Okay. That, I trust, should sufficiently gird me against criticisms that, in daring to undermine Churchill’s work and legacy, I am some sort of neo-fascist who wishes that Britain had capitulated to Hitler.

Now to the business of undermining Churchill’s work and legacy.

A cursory Google search along the lines of “Winston Churchill criticism” or “Churchill + bad” should return plenty of sources indexing the less felicitous aspects of this Great Liberal Hero’s character. In the interest of brevity, here are a few greatest hits, such as they are:

He was, in a certain fashion, a warmonger. During the First World War, he confided to a friend: “I think a curse should rest on me — because I love this war. I know it's smashing and shattering the lives of thousands every moment — and yet — I can't help it — I enjoy every second of it.” This is something that “Darkest Hour,” which depicts Churchill as deeply conflicted over the human cost of war, omits pretty much entirely.

Despite his historical position, along with F.D.R., as the West’s triumphant Anti-Hitler, the Nazi leader was more of a military than ideological threat to Churchill. Writing in The Strand magazine in 1935, Churchill stated: “One may dislike Hitler's system and yet admire his patriotic achievement. If our country were defeated, I hope we should find a champion as indomitable to restore our courage and lead us back to our place among the nations.” He reiterated this sentiment in the fall of 1938, following the signing of the Munich Agreement: “I have always said that if Great Britain were defeated in war I hoped we should find a Hitler to lead us back to our rightful position among the nations.” Game, as they say, recognize game.

One can, perhaps, account for such actions by deferring to historical context. Given the period in which he worked, both as a government functionary and prime minister, Winston Churchill’s racism, his casual anti-Semitism and his hostility toward organized labor land him squarely inside the range of acceptable opinion. Likewise, his praise of Hitler was issued well before the world had been made aware of the full horrors of the Nazi regime. And, perhaps, a love of war and armed conflict can be deemed a virtue when the whole world is plunged into the abysmal muck of war. Perhaps. Sure.

But the near-saintlike glorification of Churchill — as a loquacious rabble-rouser whose speeches and public radio addresses buoyed the Allied spirit, and whose barbed parliamentary witticisms made him seem clever and vaguely everyman-ish — betrays the grander cultural and historical mythologizing of the Second World War. (I’ve written about the comfort of these myths in these digital pages before.) Films like “Darkest Hour” work not to complicate, but further refine such convenient myths.

Likewise, Churchill himself has become a grandiose figure in the performing arts. Serious-minded thespians from Richard Burton and Bob Hoskins through to John Lithgow, Brian Cox and Brendan Gleeson have savored the opportunity to chomp on a cigar butt and glower with single-minded seriousness, upper lips so inflexibly stiffened you could crack an egg on them. It’s as if by playing Churchill one is immediately taken seriously. The role has become the Hamlet of historical drama. And so by merely attempting it, one is practically ensured a certain recognition. In fairness, Oldman’s performance in “Darkest Hour” is considerably more idiosyncratic than the boilerplate caricature that usually cuts the mustard in this role. The gravitas afforded Oldman’s performance is further augmented by the substantial facial prosthetics, the fat suit, and other accoutrements required for the actor to pass as Churchill.

The problem emerges in “Darkest Hour’s" reception as somehow inspirational, or instrumentally useful, in our present political moment of clownish tyrants and renewed fascist sympathies. The problem is the very idea that we need more Churchills.

Churchill himself deliberately misreported and fudged the facts of war in order to crystalize public sympathies. In a weird paradox, “Darkest Hour” bothers to analyze those fabrications, while itself fabricating several key scenes, most notably a sequence in which Churchill descends into the London tube to canvass commoners about whether or not Britain should take a stand against tyranny. Besides being made up, the subway scene is also horribly cloying. Like, what are citizens meant to say when their prime minister asks them if they’d like to rise to the occasion and fight fascism? “No”? As “Variety”’s Owen Gleiberman noted, the London Underground bit is also catnip for Academy voters, “the clip that was made to be shown, in triumph, on the telecast.”

As pure entertainment, such pleasant fictions are of course permissible — even encouraged. As fresh layers to the already too-beguiling Churchill Myth, they’re utterly irresponsible. Times may well be tough, hours may be dark, and we may all be desperate for inspiration and uplift. But we hardly need more Churchills.

A “Good” warmongering, anti-Semitic, ethno-nationalist tyrant offers no real antidote to even the Worst warmongering, anti-Semitic, ethno-nationalist tyrant. What would be truly uplifting, and inspirational, is a renewed willingness to cut through the myth and hagiography of even the greatest of the Great Liberal Heroes, and do away with tyrants altogether.