Laura Monterrosa says she was abused by a guard. Now ICE won't let advocates or elected officials visit her 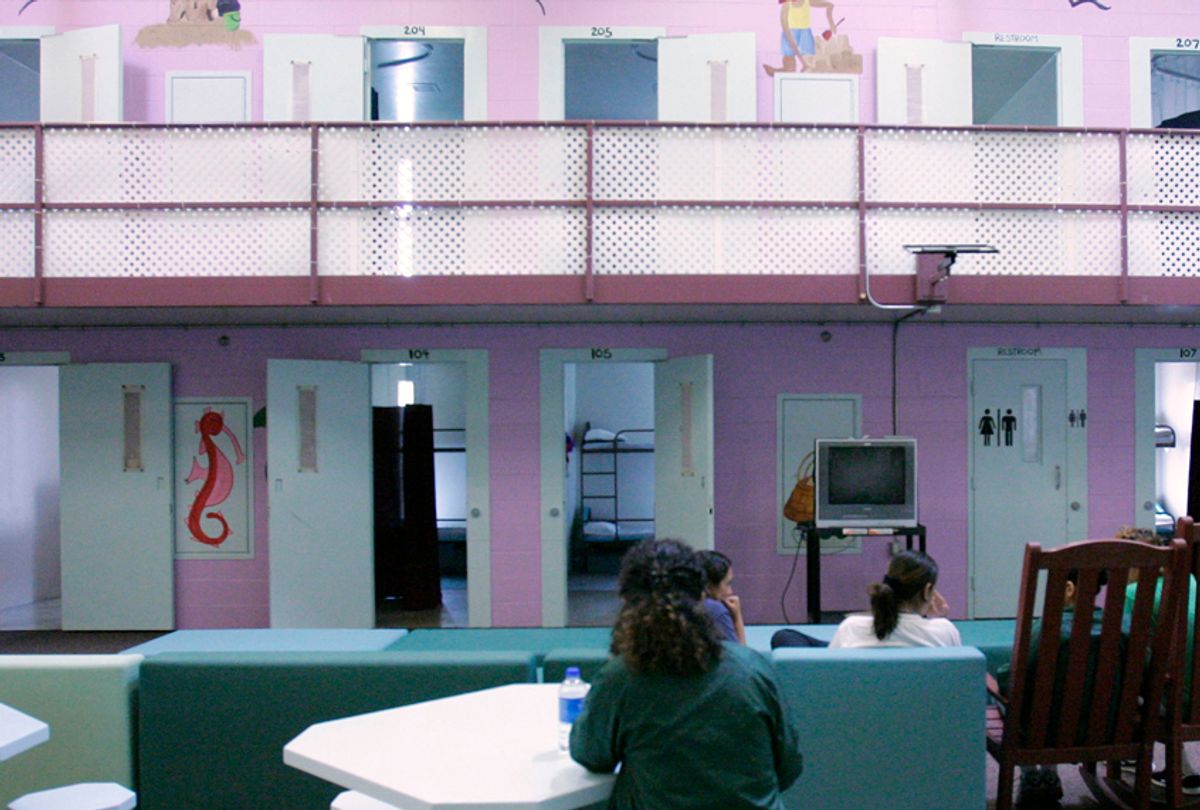 Despite having the personality of a doddering old fool, Donald Trump has -- as Jamelle Bouie recently wrote at Slate -- proven remarkably competent at "boosting, bolstering, and unleashing the Immigration and Customs Enforcement agency" as an "empowered and authoritarian" arm of law enforcement "that operates with impunity" and whose "chief attribute is unapologetic cruelty."

The ongoing case of Laura Monterrosa, an LGBT woman held in a privately owned detention center in Taylor, Texas, is a horrifying example. Monterrosa is a 23-year-old asylum-seeker from El Salvador, who says she was the victim of sexual abuse in her home country. But instead of receiving medical or psychiatric help, she's being held at the T. Don Hutto detention center, where she says she was sexually abused by a guard and subjected to escalating retaliation from staff for reporting that abuse. Now advocates are deeply concerned about Monterrosa's physical and mental health, reporting that she has attempted suicide at least once and that her imprisonment is leading to rapid deterioration of her condition.

“It seems the detention center is focused on hiding things from the press and hiding things from elected officials, instead of doing the right thing by letting Laura out," said Gregorio Casar, a city council member from nearby Austin, in an interview with Salon.

Casar tried to visit Monterrosa last week, after issuing a press release calling for her release, but says he was stopped by Hutto employees before he even got to the door. He said they were worried he would speak to the press about his visit -- which he fully intended to do and believes is his right as an elected public representative. He emphasized during our interview that the center typically allows detainees to receive visits from friends, relatives or members of the public, so the decision to prevent him from entering was highly irregular.

Monterrosa first reported her abuse in November 2017 , after becoming friendly with activists from the local group Grassroots Leadership. She wrote the group a letter in which she said that a female guard at the Hutto facility attempted to coerce her into a sexual relationship.

"She looked for or took advantage of every moment she could to touch my breasts or my legs," reads an English translation of the original letter, which was written in Spanish. "I told her that I was going to talk to the captain, but she laughed with a sarcastic laugh and said 'do you think that he will believe you, please, they never will.'"

Bethany Carson, an immigration policy researcher for Grassroots Leadership, told Salon that after Monterrosa wrote the letter, things got worse for her. Carson described an escalating series of tactics — especially the use of solitary confinement — that she believed were meant to intimidate Monterrosa into retracting her accusations against the guard, which Monterrosa hasn't done. Carson also says Monterrosa has been subjected to ongoing interactions with her alleged abuser, which has led to Monterrosa hiding in her room, refusing food and feeling afraid to walk around the facility for fear of confrontation.

In January, Carson said, Monterrosa "called me and told me that she had taken over 50 pills, mostly pain medication." Carson then described a series of intense phone calls with officials as she tried, from outside, to get help. Officials at the facility ultimately intervened to saved Monterrosa's life, Carson said.

ICE did not respond to Salon's request for an interview about these allegations, but the agency issued a statement earlier this month reporting that Monterrosa had been sent to the "medical unit for evaluation after staff became aware of a self-reported medical situation." ICE officials deny isolating Monterrosa in solitary confinement in order to extract a retraction from her. Instead, ICE says it "offered to transfer Monterrosa-Flores to another facility but she declined the offer."

Being sent to another facility, likely in Laredo, Texas (roughly 280 miles away), would have meant being separated from her alleged abuser. But Carson said Monterrosa had good reasons to want to stay in Taylor.

“She said no because her entire support system is here," Carson explained. "Her attorneys are here. This is where the crime happened, so local authorities aren’t going to be able to investigate if they move her.”

Connie Odom, the public affairs manager for Williamson County, replied to Salon's request for comment by saying that "the FBI is the appropriate law enforcement authority to investigate this situation." The FBI confirmed that there was an investigation into Monterrosa's situation, but declined to offer any further information.

Monterrosa's situation is far from unique, unfortunately. Since she stepped forward, two more women being held at Hutto have complained about sexual mistreatment. Through Freedom of Information Act requests, the ACLU has documented nearly 200 reported incidents in detention facilities across the nation since 2007. The organization argues that is "likely just the very tip of the iceberg," because sexual abuse is already underreported in general and, as Monterrosa's case shows, there are strong disincentives for women in detention centers to report instances of abuse.

The Hutto center is run by CoreCivic, which changed its name from Corrections Corporation of America in 2016, after multiple reports of widespread abuse under the company's watch. Shane Bauer of Mother Jones even went undercover for four months at a prison run by the company, exposing dangerous and inhumane conditions.

After Casar was turned away from visiting Monterrosa, he and two other Austin City Council members, Delia Garza and Sabino Renteria, wrote a letter to ICE demanding that the agency "release Ms. Monterrosa immediately" and questioning the decision to bar Casar's visit "even though other members of the public are allowed to enter at their convenience."

On Monday, a group of 45 congressmen, including Rep. Lloyd Doggett, a Democrat from Austin, and Rep. Joaquin Castro, a Democrat from San Antonio, wrote another letter  to ICE "to express our concern regarding the prevalence of reports of sexual assault and abuse in Texas immigration detention facilities" and to demand an immediate investigation of the cases and an audit of the Hutto detention center.

Carson says she is still in phone contact with Monterrosa but has been barred from visiting her in person. She worries that Hutto staff is trying to use Monterrosa's isolation "as leverage to make [her] feel so isolated that she signs this statement retracting her testimony." Casar said that Austin-area nonprofits are ready to offer help and support if Monterrosa is released.

Whatever happens to Laura Monterrosa, her case is just one example of what can happen when a federal agency is granted sweeping new powers -- in this case, broad powers to detain and deport noncitizens with little oversight or due process. Being undocumented is not a crime, whatever Donald Trump and many of his supporters may believe, but many immigrants without papers are now being rounded up and imprisoned like criminal suspects. Once in detention, they have little recourse to fight back against abuses, often less than actual prison inmates, who can still rely on their constitutional rights as citizens. President Trump's apparent agenda is to drastically increase the number of innocent people subject to this kind of treatment.