Xi, Putin, Erdogan, Sisi and Duterte all get to do what they want and execute their opponents. Trump feels cheated 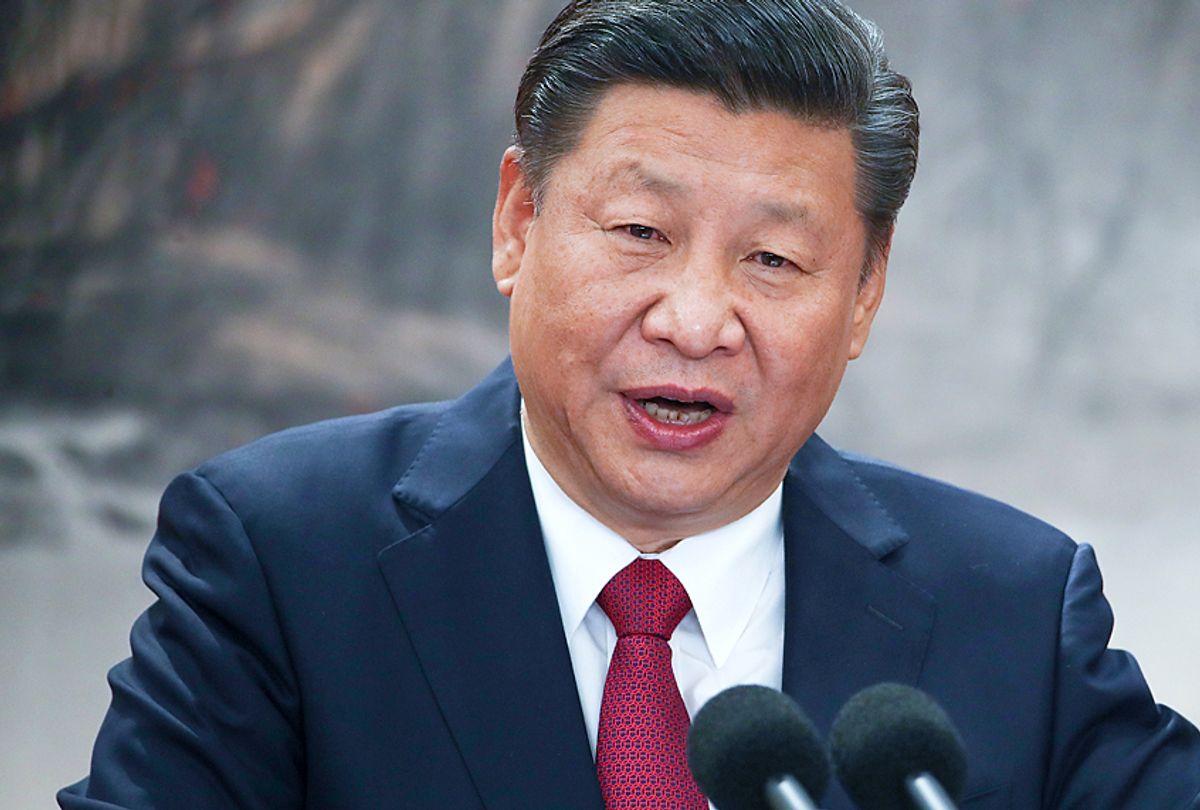 The New York Times had a startling headline on Monday morning, which describes a global phenomenon that we're only beginning to grasp in America. It said: "With Xi’s Power Grab, China Joins New Era of Strongmen." The story itself was about Chinese President Xi Jinping abolishing term limits and announcing he would lead China indefinitely.

Term limits are fairly recent in China, having been put into the constitution in the 1970s by Deng Xiaoping in the wake of the long succession crisis under Mao Zedong. Still, as the Times points out, there was a time not long ago when this would have provoked a strong outcry from the United States, which used to have some moral authority when it came to democratic norms. Those days are no more. White House Press Secretary Sarah Huckabee Sanders issued the tepid statement: "I believe that's a decision for China to make about what's best for their country." And that was that.

But the more chilling aspect of the headline is its evocation of "the era of the strongman," naming Vladimir Putin of Russia, Abdel Fattah al-Sisi of Egypt and Recep Tayyip Erdogan of Turkey as the prime examples of the era's new authoritarian leaders. One could certainly also add Rodrigo Duterte of the Philippines and Kim Jong-un of North Korea. There is also, of course, the one with the biggest hands in the business, President Donald Trump, although he is better characterized as a "rhetorical" strongman, at least for the moment.

Still, it's telling that as Trump slags American neighbors and allies on a daily basis (he went after Canada on Monday), he is complimentary to all the aforementioned leaders. Yes, he has called Kim of North Korea "Little Rocket Man" -- but that's actually an affectionate nickname, compared to what he says about some American politicians. In the past, Trump has complimented Kim, saying, "You gotta give him credit, how many young guys -- he was like 26 or 25 when his father died -- take over these tough generals, and all of a sudden . . . he goes in, he takes over, and he’s the boss." As we know, he has had nothing but kind words to say about Putin, Sisi and Erdogan, all of whom have taken steps this year that would have caused major diplomatic disruptions in the past. Trump only has admiration for their bold "defenses" of their countries.

Just this week, Axios reported that Trump constantly tells people that he wishes he had the authority to do what the Asian strongmen do:

He often jokes about killing drug dealers . . . He’ll say, "You know the Chinese and Filipinos don’t have a drug problem. They just kill them."

But the president doesn't just joke about it. According to five sources who've spoken with Trump about the subject, he often leaps into a passionate speech about how drug dealers are as bad as serial killers and should all get the death penalty. Trump tells confidants a softer approach to drug reform — the kind where you show sympathy to the offenders and give them more lenient sentences — will never work. He tells friends and associates the government has got to teach children that they'll die if they take drugs and they've got to make drug dealers fear for their lives.

He grudgingly admits that it would be difficult to pass such a law, but he would "love" to do it.

Trump just "loves" the death penalty, period. He's been agitating for it since the 1980s when he took out that infamous full-page ad calling for the Central Park Five to be executed. (Those five young men were subsequently found innocent of the crime for which they were convicted.) During the presidential campaign, after the shooting of police officers in Dallas, Trump promised he would seek the death penalty for anyone who killed cops. (This was the one occasion where he eschewed his tiresome solution that mass shootings could be stopped if only everyone were armed. After all, they all were. It didn't help.)

Trump has been generous with his praise for Philippine president Duterte, telling him that he was dealing with drugs "the right way," which evidently involves extrajudicial killings and mass incarceration.

He and Duterte have something else in common. Everyone knows that Trump bragged about assaulting women by grabbing their genitalia against their will. According to the Guardian, last week Duterte directed a group of soldiers to tell female rebels that there was "a new order coming from the mayor: ‘We will not kill you. We will just shoot you in the vagina.’" This would, he said, render them "useless."

Duterte runs on the cruder side of the strongman spectrum, but Trump apparently finds him refreshing. He invited him to the White House, to the consternation of decent people everywhere. Duterte at least had sense enough to decline the invitation.

So far Trump's worst assaults on civil liberties and due process have been stymied by the courts and the Justice Department. (He is having better luck with the Department of Homeland Security, which is moving quickly in an authoritarian direction.) With respect to foreign policy, he is such a buffoon that one would normally only worry that he'd make a fool of himself here at home while the career diplomats at the State Department step in behind him and clean up the mess.

Sadly, the State Department itself is a mess. Rex Tillerson hasn't bothered to fill most of the important political appointments and is sidelining the career foreign service people who know anything. Nothing could be more alarming than the fact that we still have no ambassador to South Korea and instead sent the totally unprepared Ivanka Trump to represent our nation at the Winter Olympics.

Meanwhile, the latest report from Politico is that Tillerson is having a fit over son-in-law Jared Kushner, U.N. ambassador Nikki Haley and national security adviser H.R. McMaster's constant interference. White House Chief of Staff John Kelly apparently agrees with him and made the mistake of repeating to Kushner Tillerson's remark that "there cannot be four secretaries of state." Kushner, who still has no security clearance, reportedly replied, "No, but we need a secretary of state who is supportive of the president."

It's always about personal loyalty to Trump with these people. That's the hallmark of the strongman leader. It's all about them. Trump is not as efficient as Xi, Putin or Erdogan, and he's not quite as far gone as Duterte. But he's the closest we've come to a true strongman leader in the United States, and he's just getting started.