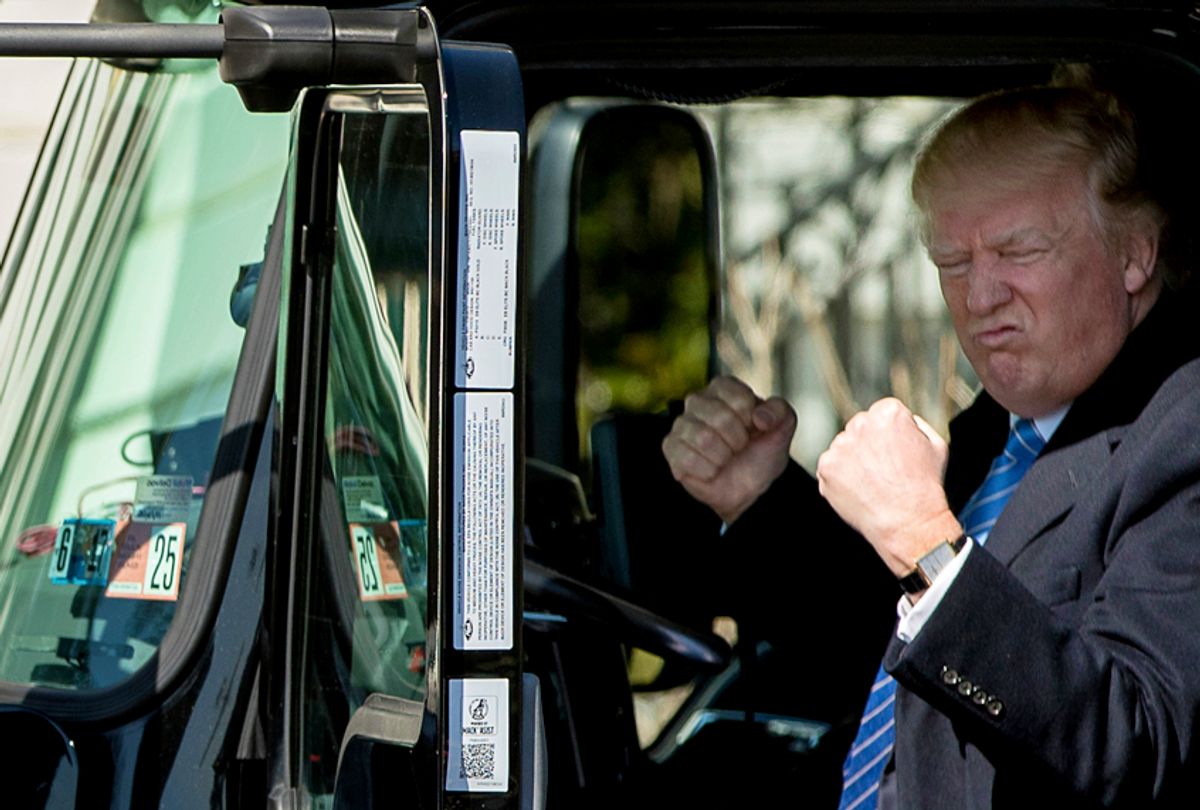 President Donald Trump has made clear that he believes he has a mandate to cut back on rules and regulations that he thinks no longer serve America, part of a long-standing conservative doctrine that tends to delight corporations and harm everyday people. Indeed, in quiet rounds of upheaval over the last year, the Transportation Department has rescinded, withdrawn or delayed many significant safety rules, an Associated Press exclusive review found.

Many of the sidelined rules were created in light of tragic events, the AP explains, and require states to conduct annual inspections "of commercial bus operators, railroads to operate trains with at least two crew members and automakers to equip future cars and light trucks with vehicle-to-vehicle communications to prevent collisions," in the AP's words. More horrifyingly, many of the rules had been determined to save hundreds or thousands of lives every year.

“These rules have been written in blood,” John Risch, national legislative director for the International Association of Sheet Metal, Air, Rail and Transportation Workers, told the AP. “But we’re in a new era now of little-to-no new regulations no matter how beneficial they might be. The focus is what can we repeal and rescind.”

Here's a look at the rules that have been impacted related to automobiles, via the AP report:

"A 2016 proposed rule to require new cars and light trucks be able to communicate wirelessly with each other to avoid collisions, one of the most promising technologies for reducing traffic fatalities, is languishing. The White House has moved the proposal from its list of active rulemakings to its long-term agenda, which means no action is expected before the end of the federal fiscal year on Sept. 30, if at all. The National Highway Traffic Safety Administration has said it is still reviewing public comments on the proposal and no final decision has been made."

"A rule adopted in 2016 in response to a congressional directive requires that new hybrid and electric vehicles emit sounds when traveling at low speeds to alert pedestrians and cyclists to their approach. The government estimates the rule would prevent 2,800 injuries over the life of each model year of the vehicles."

"Ten days after Trump took office, two auto industry trade associations petitioned DOT for an extra year to comply with the rule. The deadline for full compliance with the rule was Sept. 1, 2019, but in a notice posted online over the weekend DOT said is granting the request for an extra year, among several other changes sought by automakers. The new compliance date is Sept. 1, 2020."

Multiple safety regulations that would affect commercial trucks and buses are also included:

"The White House moved a 2016 proposal to require software in new heavy trucks be set to limit speeds from its list of active rulemakings to its long-term agenda. DOT studied maximum speeds of 60, 65 and 68 mph. About 1,100 people are killed annually in crashes involving heavy trucks on roads with speed limits exceeding 55 mph."

"DOT has withdrawn a rule it was in the early stages of writing to require that states annually inspect commercial buses and other passenger-carrying vehicles. Since 1990, there have been more than 220 commercial bus crashes and fires resulting in at least 484 deaths and 4,618 injuries, according to Advocates for Highway and Auto Safety, which tracks crashes through media reports."

The report also found that an interim rule on banning shipments of rechargeable lithium batteries on planes was inching closer to becoming a law, but was returned to The Pipeline and Hazardous Materials Safety Administration after Trump assumed his position in office.

The Transportation Department declined multiple requests for an on-the-record interview, the AP reports. Instead they provided the AP with a statement from James Owens, DOT’s deputy general counsel.

“We will not finalize a rule simply because it has advanced through preliminary steps,” the statement said. “Even if a rule is ‘one step away,’ if that rule is not justifiable because it harms safety and imposes unnecessarily high economic costs, for example, that rule will not advance.”