On Tuesday, one important voice stood out among the revelations from Trump's inner circle 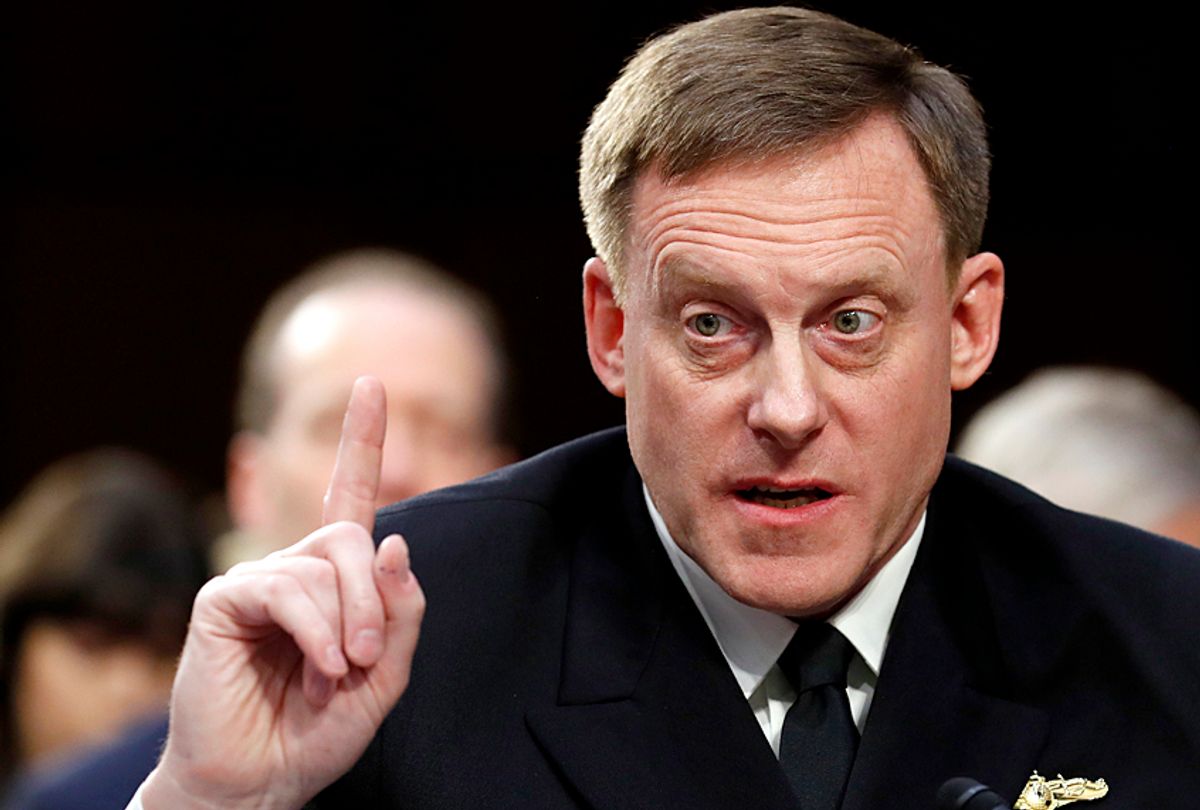 Tuesday was an exhausting news day. It started with President Donald Trump quoting a bunch of Fox News guests proclaiming his innocence and culminated in what can only be described as a primal tweet:

That was just the beginning. We learned that Jared Kushner has had his top security clearance downgraded — and it was likely because National Security Adviser H.R. McMaster found out that he has been having meetings with foreign dignitaries on the sly, while certain governments have been keenly interested in taking advantage of his inexperience, debt and blatant conflicts of interest. And that's not even counting the fact that he's up to his neck in the Russia investigation. The White House insists that he's still got his portfolio of bringing Middle East peace and handling relations with China and Mexico, among other things, but nobody can figure out how he can possibly do it if he is not privy to the top U.S. intelligence.

The president could, of course, just slip him the paperwork — he has that power — but it appears that Trump is trying to put a little public distance between himself and his son-in law, only mustering a lame defense that he's been "treated unfairly" and that he's a good person who works for nothing. (Trump doesn't seem to realize that we all know that rich people in great debt who work for free, like Kushner and Paul Manafort, might be getting something else out of the deal.)

Meanwhile, White House Communications Director Hope Hicks testified before the House Intelligence Committee and, like Steve Bannon before her, apparently just refused to answer most of their questions. The White House has not claimed executive privilege and she didn't plead the Fifth — so normally this would result in a witness being held in contempt of Congress. But this committee is run by Devin Nunes and his Trump coverup band of Republicans, so that was that. She did admit to telling some "white lies" on her boss's behalf sometimes, so that's something.

Meanwhile, The Atlantic's Natasha Bertrand got a hold of private Twitter messages revealing that Trump pal and Nixon dirty trickster Roger Stone was actually in touch with Wikileaks during the campaign, even though he said he wasn't. Joshua Partlow and David A. Fahrenthold at The Washington Post reported that police arrested a security guard at a Trump hotel in Panama when the hotel’s majority owner tried to fire the Trump Organization and Trump employees wouldn't leave. Now the Panamanian government is involved in the dispute, which causes exactly the kind of conflict of interest that might be expected when a president refuses to divest himself of properties and interests in foreign countries.

But perhaps the most important story of the day was a rather stunning appearance before the Senate Foreign Relations Committee by Admiral Mike Rogers, director of the NSA and U.S. Cyber Command. On the verge of retirement and clearly not pulling any punches, he let it all hang out, testifying that the president hasn't issued any special directives to counter Russian election interference and saying  “Clearly, what we’ve done hasn’t been enough.” He specifically criticized the administration’s decision not to bother implementing  sanctions mandated by Congress as punishment for their intrusion in 2016:

Not just the sanctions but more broadly, my concern is, I believe that President Putin has clearly come to the conclusion there’s little price to pay here, and that therefore I can continue this activity . . . everything, both as the director of NSA and what I see on the Cyber Command side, leads me to believe that if we don’t change the dynamic here, this is going to continue and 2016 won’t be viewed as something isolated. This is something that will be sustained over time.

One can only surmise that President Trump is fine with that, assured for some reason that he will be the beneficiary. In fact, he is so fine with it that he announced he had hired his controversial digital guru from 2016, Brad Parscale, as his campaign manager for 2020.

You may be wondering why in the world Trump is announcing his campaign manager already — after only a year in office. But Trump seems to love campaigning more than being president, which he isn't very good at. There is also the matter of a lot of fundraising already being done for the campaign, large amounts of it being spent on salaries for relatives and cronies of Trump and Vice President Mike Pence, along with big bucks for rent in Trump Tower. It's best to have someone "managing" all that money.

Parscale would normally be an odd choice for such a job. He is enmeshed in some very shady business deals, although that seems to be a requirement for any job with Donald Trump. He had no political experience before 2016; he basically was a webmaster who fell into the job of working with Jared Kushner and the shadowy digital company Cambridge Analytica on their social media strategy, which was the only sophisticated aspect of their operation.

Parscale took credit for developing the Facebook and Twitter strategies that he claims won Trump the election, so choosing him for a top Trump 2020 campaign job while the Russia investigation is ongoing is simply mind-boggling. After all, special counsel Robert Mueller just indicted 13 Russians for using those platforms for their propaganda effort, and there is plenty of suspicion that more Americans may have been involved in targeting and strategy.

Nobody knows if Parscale was involved — but he was very, very close to the action.  And it's not as if there aren't any other campaign operatives Trump could turn to. After all, the person who really ran his campaign is right there in the White House — Kellyanne Conway.

Trump's top intelligence officials are all saying that he hasn't bothered to order any kind of serious response to the interference, and they believe the Russian government understands that it is free to keep going.  With the naming of Parscale, it's almost as if Trump's sending a message to interested parties that he's counting on the "digital campaign" to win the election for him in 2020, and he's putting the man in charge who will see to it that anyone who wants to "volunteer" will get all the help they need.