Salon video exclusive: "Corporate" holds up a black mirror to our work life

This sugar-free portrayal of the slow, poisonous uselessness of white-collar hell is the work comedy for our times 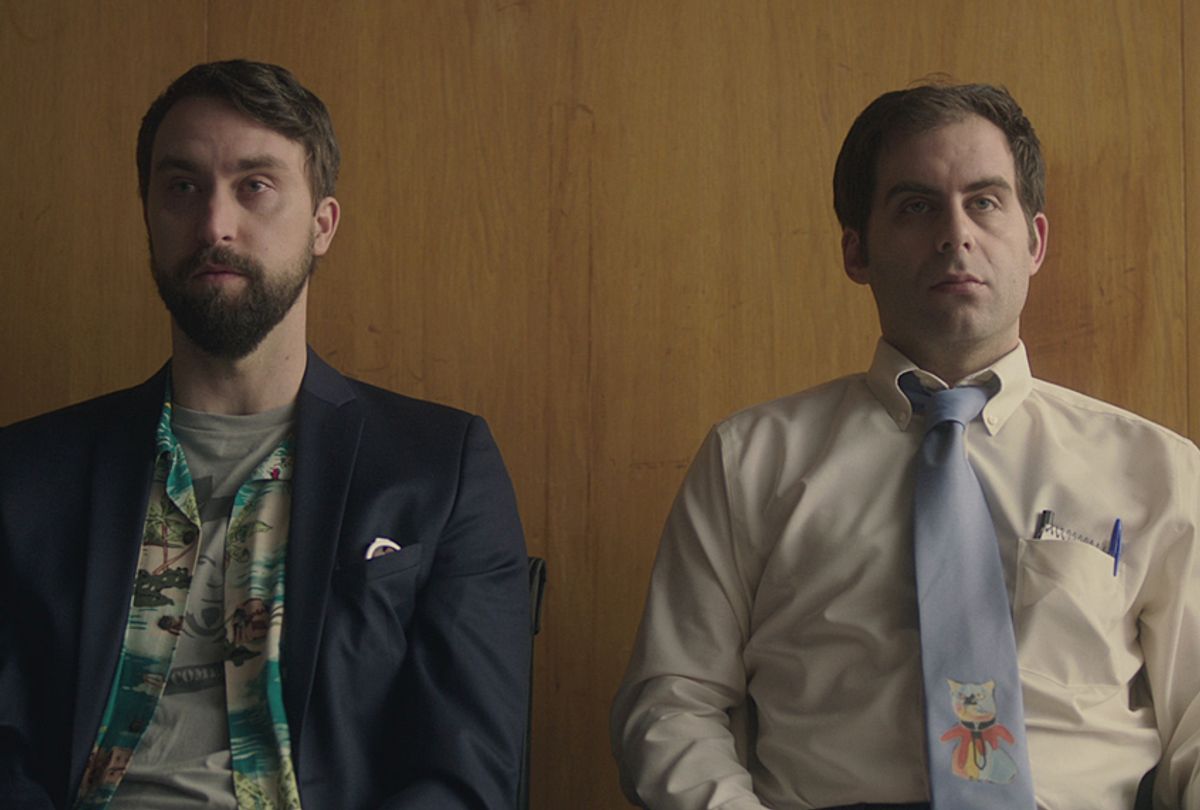 And unless you are fortunate enough to work at a company that prioritizes the health and happiness of its employees over everything else — which is increasingly unlikely — a day at the office does not resemble life on “The Office,” or “Parks and Recreation,” “Brooklyn Nine-Nine,” “30 Rock,” or “Workaholics.”  The professional environments depicted in “Sports Night” and “Mary Tyler Moore” feel so unrealistically outdated that they might as well be relics.

For many people, today’s world of work looks like the one in Comedy Central’s “Corporate,” currently airing Wednesdays at 10 p.m.  The first episodes of “Corporate” drew comparisons to the 1999 film “Office Space,” “Silicon Valley” creator Mike Judge’s cinematic paean to white collar employees who hate their jobs.  Nowadays, if you happen to work at a job that you can’t stand but feel forced to endure for the medical insurance, “Office Space” looks just shy of a soft-scripted documentary.

The “Corporate” world is a grey-filtered, dingily lit land of soul-numbing personalization. Where technology and monopoly have made it possible for you to do your job anywhere and therefore, you never need to stop working. Where global conglomerates find ways to co-opt civil disobedience and counterculture into fashion, enabling them to profit off of the illusion of rebellion. Where employment at an Everycorp hinges on one’s ability to streamline! Innovate! Do more with less! Make up new senseless workplace terms! Synchrophomorphigize!

Consider this excerpt from its latest installment, “Society Tomorrow,” premiering exclusively on Salon. You may recognize a few disturbingly true-to-life similarities between the lives of the employees at the multi-national corporation Hampton DeVille and your own.

If you’re a febrile participant in whatever binge-watching obsession is driving conversation at the moment (“Black Mirror,” anyone?) or if you reflexively shop at a certain gargantuan “everything store” that also happens to be in the business of making movies and TV shows, this episode could make you take a hard look at how you’re living. Which is precisely what good television should do.

“Corporate” is the creation of Pat Bishop and its stars Matt Ingebretson and Jake Weisman, who play perpetually exhausted Hampton DeVille cubicle drones. Company CEO Christian DeVille (Lance Reddick) and his top managers John and Kate (Adam Lustick and Anne Dudek) regularly inflict apparently pointless tasks and meetings upon the staff, interrupted by the occasional team building exercise such as trust shaves. Nobody at Hampton DeVille cares about anyone else. Even Matt and Jake are sort of a smarter, modern day version of Mutt and Jeff, men whose bond exists out of a symbiotic survival urge as opposed to abiding affection.

The only other Hampton DeVille employee who behaves like an actual person is its human resources director Grace (Aparna Nancherla), who has the best and worst role in the office. She has to listen to everybody’s problems and yet, capturing the essence of what the #MeToo movement has revealed about the general uselessness of HR departments at large companies, she knows that management has no intention to do anything to make anyone’s lives better.

For example, when she presents the results of a study explaining why the lifespan of a Hampton DeVille employee is shorter than the national average, including the data point that its workers pop pills nonstop “to cope with the pain of being alive,” management’s first response is, “First step: Let us never speak of this again.” (There is no second step.)

And unlike those other shows mentioned above, “Corporate” isn’t meant to soothe miserable workers with fuzzy imaginings of work families and interpersonal loyalty. Don’t get me wrong — we need shows like those to help us feel better and keep plugging away at our careers. But we also need series that scream out alarms about, say, at the frightening incursion of corporate will into every part of our lives.

“Society Tomorrow,” the show-within-a-show, makes life look dangerous and sexy by laying a “Big Brother”-style conspiracy over every interaction, lulling viewers like Matt in the comfortable idea that real life could never like that. All the while, every bit of data produced by Matt and people like him — us, that would be us — is being scraped and processed. Maybe that’s funny to you, or it isn’t. But it is true.

Television is littered with the corpses of failed workplace sitcoms, so to say it’s easy to sell one with loveable characters in relatable scenarios unfairly downplays how difficult it is to create a hit and maintain its success. But to lean into what one “Corporate” character describes as “the daily horror humans are dealing with” without remorse takes guts and skill.

“Corporate” does this by brandishing dystopian, surreal humor that sticks its landing, line after line, episodes after episode, on a mat made of the fundamental truth that terrible jobs are a slow poison, and that many of us stay with those jobs because we think it’s better to slog away in the gulag we know.

The good news is that this mortifying hilarious series has been renewed for a second season, although it has yet to attract a very large audience. It still may be little too on-the-nose for anyone powering down at nighttime and dreading what tasks await them on Thursday morning. The same could be said of “Silicon Valley,” by the way — a series that so accurately captures the spirit and dread of tech company culture that at times, it less resembles a comedy so much as a series of cautionary employee resource videos.

But this assessment doesn’t necessarily mean “Corporate” fails at its purpose. On the contrary, with each episode its necessity as an instrument of surgical social satire grows ever more apparent. When we get used to looking at our own drawn faces in a mirror, sometimes the only way to wake up is to see the reality of our lives reflected back at us in an unexpected place.