The night I chased Miss Universe with Donald Trump 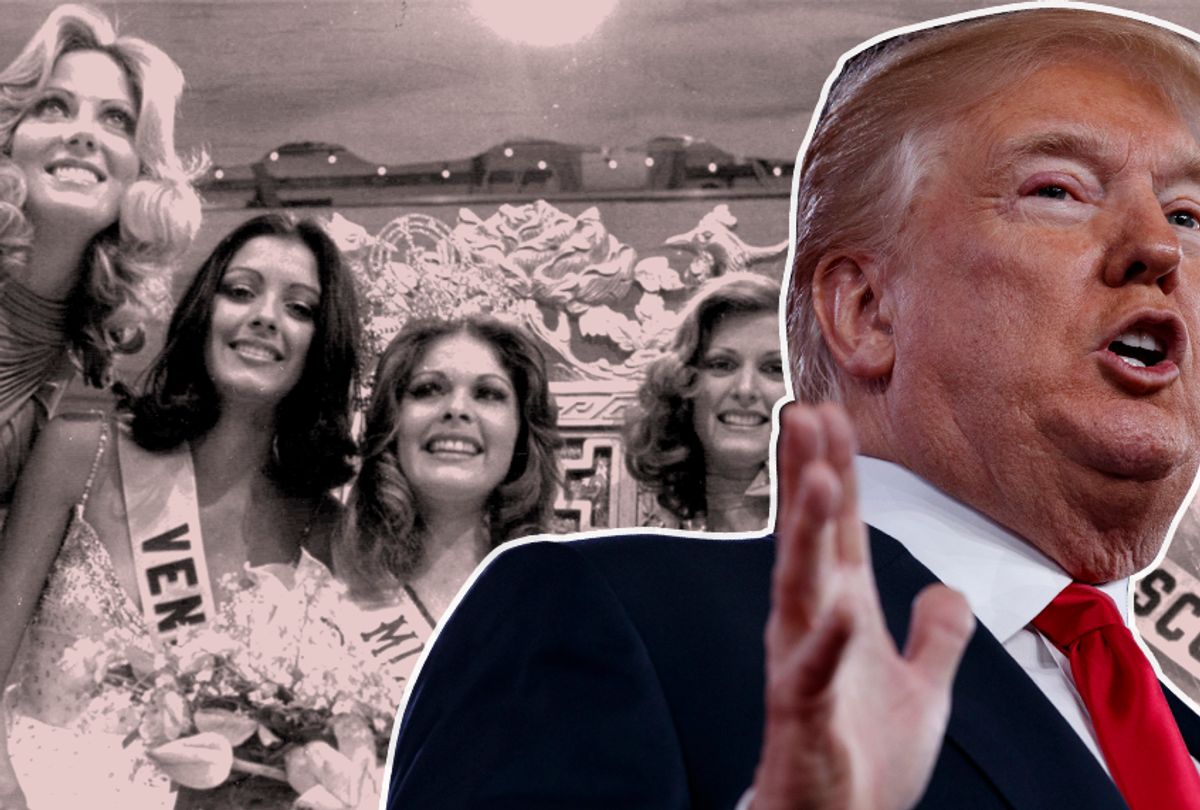 It was the late 60’s, and I discovered the Lion’s Head on Christopher Street because it was next door to the Village Voice, where I was contributing freelance articles. Located a few steps below street level, the Head was narrow and dark and wood-paneled — in short, everything you would imagine a Greenwich Village bar to be. It was known as a writer’s bar, a place where you came if you were a writer with a drinking problem, or a drinker with a writing problem. It was sometimes hard to distinguish between the two, even among the fairly well-known writers who were frequently in residence. There was Pete Hamill, the newspaper columnist; Ted Hoagland, the nature writer; Joel Oppenheimer, the poet; David Markson, a novelist whose manuscript for “Wittgenstein’s Mistress” was rejected by publishers 54 times; Fred Exley, the author “A Fan’s Notes;” Joe Flaherty, the former longshoreman turned Village Voice columnist who managed Norman Mailer’s campaign for mayor of New York City in 1969; Lanford Wilson, the playwright who wrote “Hot l Baltimore;” the literary critic Wilfrid Sheed; and songwriters from Liam Clancy to Jerry Jeff Walker to Dave Van Ronk to Bob Dylan.

Presiding over all of this on the day shift was Archie Mulligan, with his wavy red hair and hawkish nose and impish grin and grandly expansive catalog of tall tales. To hear Archie tell it, he was the brother of jazz saxophonist Gerry Mulligan, who being conveniently located on the West Coast, was unavailable to confirm this assertion of Archie’s. Archie contended that in his day he had dated some of the biggest stars — Kim Novak was one, and, Archie said, Peggy Lee and he had had such a memorable night together, she still always gave him a call when she was in town.

Archie was full of tall tales, but none taller than the tale of his three Purple Papal Papers. Archie insisted that he had died three times, had been administered last rites by priests, and had somehow risen from the dead to live again. I can’t remember the cause of his first two deaths, but the third had happened at O’Henry’s Steakhouse, over on Sixth Avenue. While working there one day, he somehow fell down the basement stairs and struck his head and died. Conveniently enough, there was a Catholic priest on the premises — priests were always nearby when Archie died — and when they couldn’t get a pulse from Archie, he administered last rites. Archie was brought back to life in an ambulance, and later the priest made a report to the Vatican about the miracle of the resurrection of Archie Mulligan. The Vatican, according to Archie, issued his third Purple Papal Paper commemorating the new miracle as they had the other two times he died.

Well, Archie of the Purple Paper Papers was bartending one afternoon around 5 p.m. when a call came in on the house phone for me. “Lucian, are you here?” he called out, covering the receiver and looking down the bar straight at me, checking to see if I was receiving calls that evening. I took the call. It was Mary Nichols, the city editor of the Village Voice. It seemed that one of Mary’s best friends owned a PR firm uptown that had been hired by real estate developer Donald Trump to promote a party he was giving that very evening for the contestants in the Miss Universe Pageant. It was to be a big, New York style shindig, and he wanted the party crowded with New York’s movers and shakers — opinion makers and businessmen and political figures and people from the media. He’d probably told her he wanted “the best people,” because Trump wanted to be surrounded by only “the best people,” as we have come to learn.

No one, not Mary or her friend the PR woman or anyone else for that matter, knew back then that Trump probably already had his eyes on owning the Miss Universe Pageant. Mary’s friend said all he wanted to do was to make a big splash and get some publicity and hang out with the babes. The problem was, she had spent days trying to drum up interest in Trump’s big party, but nobody wanted to come. Now it was only an hour or so before it was supposed to happen, and nobody was there. She called Mary in a panic, asking if she knew anyone who would be interested in attending. Mary called me. I asked if there would be free drinks. She assured me there would be.

I yelled out, “Hey, anybody interested in going to a party for the Miss Universe contestants thrown by Donald Trump uptown? There’s free drinks!” Hands shot up all down the bar. I told Mary I had about 15 to 20 guys I could bring. Mary, who had her friend on the other line, put me on hold for a minute and came back. “She’s thrilled!” Mary said. “Can you get them up there right now?” I told her I could.

So up the stairs and out the door we went. Archie declared his bartending shift over, and led the way, followed by Oppenheimer, in his shoulder length gray hair and Father Time gray beard; Ernie Nukanen, a cameraman on Turn One at Aqueduct who had spent the 50’s as a labor organizer for the Communist Party; John Bergen, who worked at the Rheingold brewery in Bushwick, and had also been a labor organizer for the Party; Stanley Postek, an enormous guy who looked like a tree trunk with hair and owned a macramé shop on Thompson Street, who it was said had been an “enforcer” for the Communist Party in the 50s doing battle with mob strike breakers; Joe Flaherty the former longshoreman on the Brooklyn docks; Dennis Duggan, a columnist for Newsday; a cop whose name I can’t recall who was the lead hostage negotiator for the NYPD and had recently handled the “Dog Day Afternoon” bank heist; and about ten other ill-dressed, ill-groomed nogoodniks in jeans and chinos. And me. I had hair down to my shoulders and was typically attired in rough-out cowboy boots and jeans and a plaid shirt and fringed suede jacket.

At the hotel, we found the Miss Universe party in a ballroom  and immediately descended on the bar. Among the 20 or so of us, only Duggan and the cop were wearing coats and ties and appeared even marginally like the movers and shakers Trump had ordered up for his party. John Bergen, whose artistry at various scams involving getting paid for minimal work was legendary, had somehow commandeered a champagne ice bucket and had it filled with bottles of Heineken and was seated at a table methodically going through the bucket. With the Miss Universe contestants not yet in evidence, we hit the bar again and again, pounding down as many free drinks as we could manage, looking around at the few other guests in their business suits and slicked down hair, figuring at any minute somebody would come along and give our crowd of rowdies the heave-ho.

Then, like magic, a door opened, and Donald Trump led the Miss Universe contestants into the ballroom. There he was in a suit and shiny black shoes, and there they were, in long gowns and big hair and big breasts and sashes announcing the countries they represented, from the Netherlands to Venezuela to Norway to Nigeria to Russia to Italy to Chile. Dozens of them, clack-clacking across the polished floors in impossibly high heels, looking around the ballroom and finding . . . us.

They looked confused, like, what the hell is this supposed to be? Trump, thankfully, was less interested in the guests than he was in the ladies, and was working his way through them, his arm around that one, kissing this one, patting that one on the ass.

I started mixing it up with the Miss Universe ladies, asking if I could get them a drink. The other Lion’s Head guys joined in. The whole thing was immeasurably stiff and awkward, but what the hell? When was the next time we were going to be in the presence of this many gorgeous women? Oppenheimer was chatting up Miss Belgium, and being something of a World War II buff, holding forth about the Battle of Bulge in the Ardennes Forest. Turned out she was from a little village along the Meuse River and had quite a knowledge of the history there. Archie was charming a bewildered Miss Mexico, claiming he’d worked on a farm down there raising stallions for a billionaire rancher and showing his brother Gerry Mulligan around the Yucatan when he passed through on tour.

Then I saw Bergen rise from his bucket and drain his Heineken.  He headed straight through the crowd to Miss Zaire. The next thing I knew, Bergen was waving his arms, bellowing “Lumumba! Lumumba!” claiming the CIA murdered him, asking Miss Zaire where she stood. Did she support that fascist Mobutu? I headed in that direction, hoping to avert some kind of international incident, when I saw Miss Zaire smile at Bergen. They were talking animatedly. Miss Russia appeared from somewhere, and then Miss Hungary, and Bergen, the old Commie, is mesmerizing them with tales about CIA perfidy, as Archie and Miss Mexico joined the crowd.

Trump was nearby, his arm around the waist of Miss Somebody. Then suddenly Bergen broke into The Internationale, the socialist anthem, singing loudly in French . . . and Miss Zaire was joining in! Then Miss Russia! And Miss Hungary! And Miss Belgium. Before I knew it, a whole crowd of them were in a circle with their arms around each other, heads thrown back, singing out, “Debout, les damnés de la terre! Debout, les forçats de la faim!” You know: “Stand up, damned of the earth! Stand up, prisoners of starvation!”

They kept singing, rocking back and forth, Bergen’s Brooklyn honk and Archie’s Irish brogue booming above them: “L'État comprime et la loi triche! L'impôt saigne le malheureux! Nul devoir ne s'impose au riche! Le droit du pauvre est un mot creux!” You know: “The state oppresses, and the law cheats! Tax bleeds the unfortunate! No duty is imposed on the rich! The rights of the poor is an empty phrase!”

The song ended, Bergen led Miss Zaire in the direction of the bar, and I could hear Archie launching into his tale about his first Purple Papal Paper.

I looked over at Trump. He was young, like most of us were, in his 20’s. He looked befuddled. Then the girl he was with started smiling. She led him over to where Miss Mexico stood, and they were listening to Archie tell them about the first time he died and was resurrected from the dead. Suddenly, Trump was smiling. He had no idea in the world what was going on, but he had his arm around a gorgeous Miss Universe contestant, and she was having the time of her life, and this red haired guy was telling some kind of tall tale, and his party was a success. Things were looking good for later. All was right with the world.