Conservatives are curiously no longer complaining about "waste, fraud, and abuse" in the Trump era. They should be 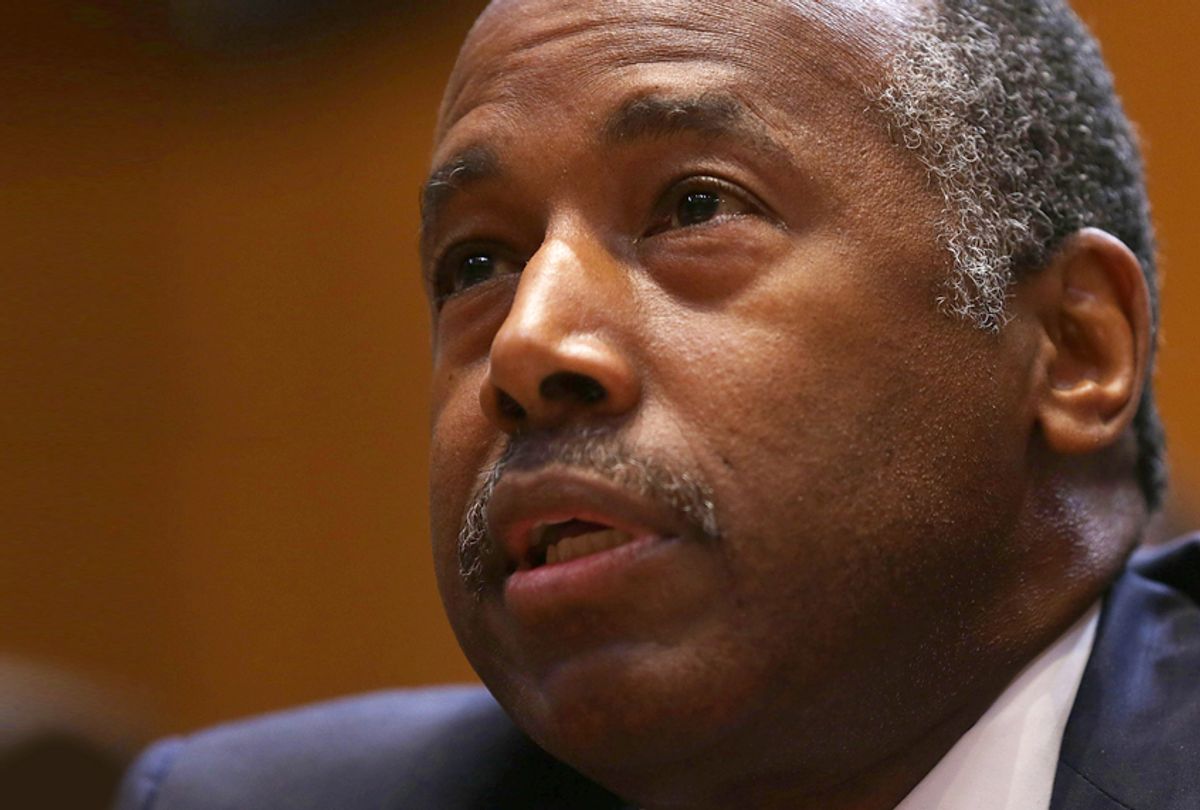 When Ben Carson proposed cutting billions from the budget for Housing and Urban Development in February, he said that the drastic cuts in spending would help move “more people toward self-sufficiency.” Slashing 14 percent of HUD’s overall budget — including a nearly 12 percent cut in rental assistance for low-income Americans, virtually making thousands of families homeless overnight — Carson insisted, would only serve more people.

“Every household we are able to help graduate from HUD-assistance allows HUD to help one more family in need,” Carson, the head of the agency, said in December.

We now know that while Carson was lecturing those in homeless shelters to not get too comfortable, he spent taxpayer funds to purchase extravagant new office furniture — including $31,000 on a new dining room.

Following an example set by his colleagues (Carson is the third member of Donald Trump’s Cabinet to face scrutiny sparked by a family member) the HUD secretary reportedly tasked his wife, Candy, with the costly redecoration. The “informal adviser” apparently decided to disregard federal rules which mandate a $5,000 legal limit on office improvements.

The opulent purchases at HUD initially came to light after a senior career official at the department filed a complaint alleging she had been demoted because she refused to "find money" for the redecoration of Carson’s office. She also alleged she uncovered a $10 million budget shortfall. She was reportedly replaced with an appointee selected by Trump.

After first falsely denying the purchase, HUD spokesperson Raffi Williams told The New York Times that Carson “didn’t know the table had been purchased” but does not intend to return it. The $31,000 dining room set is only a fraction of the $165,000 Carson plans to spend on “lounge furniture” for the office, according to The Guardian.

Like Veterans Affairs Secretary David Shulkin — whose staff doctored language to cover up the fact that the agency improperly paid for his wife’s travel — Treasury Secretary Steven Mnuchin — who flew his wife to Ft. Knox to check out the solar eclipse on a government aircraft — and former Health and Human Services Secretary Tom Price — who racked up a $1 million tab using private and military planes, including a trip to meet his wife for lunch in Georgia — Carson’s penchant for spending taxpayer funds for personal splendor is shared by a close family member.

Such egregious government waste by political appointees should be shocking developments that lead to outrage and investigations on Capitol Hill. They haven't. And that isn't simply because the Trump has made nepotism, corruption, cronyism, the new normal. (Late Thursday evening, the New York Times reported that Trump's son-in-law and senior adviser Jared Kushner met multiple times in the White House with a private equity billionaire who later loaned Kushner's private companies nearly $500 million.) It's mostly because one of the checks on the administration, the Republican-led Congress is asleep at the wheel.

Just as natural as calling for tax cuts, complaints about "waste, fraud, and abuse" are usually recited by Republicans by rote to justify cuts to government services. For Trump's merry band of big spenders, however, silence.

When ABC News asked the Senate Appropriations Committee about the scandal, the Republican-led committee had no plans to investigate, despite only being made aware of a $3,400 request to buy blinds. Sherrod Brown, however, the senior Democrat on the Senate Committee on Banking, Housing, and Urban Affairs, is calling for HUD's Inspector General to investigate.

Earlier this month, Brown and other Democrats asked the IG to look into a report that Carson's wife, son and daughter-in-law attempted to get business partners into a HUD "listening tour" in Baltimore. Some HUD officials expressed concerns that the actions of Ben Carson Jr., who is a local businessman, “gave the appearance that the secretary may be using his position for his son’s private gain,” according to a memo obtained by the Washington Post.

Such painfully clear conflicts of interests were met by Republicans in Congress with crickets.

Finally, months after the HUD whistleblower filed her complaint to the Office of Special Counsel (separate from special counsel Robert Mueller), retiring Republican and House Oversight and Government Reform Committee Chairman Trey Gowdy made a peep. In a letter to HUD, Gowdy announced that the committee is probing the "excessive spending" to redecorate Carson's office. Carson has until March 14 to turn over pertinent information.

Carson, along with Kushner, Mnuchin, Shulkin and Ryan Zinke, whose travel habits have already spawned two investigations by ethics watchdogs, presents the perfect opportunity for Republicans: A chance to serve as a check on the Trump administration.

Republicans don't want to give up any ground on Russia (a top Republican on the House Intelligence Committee called for their Russia probe to be disbanded on Wednesday). But a principled stance against "waste, fraud, and abuse" — even from a Republican administration —  is a chance for vulnerable GOP lawmakers to appeal to independent voters ahead of the midterm election. But by all appearances, they have no interest in doing their job of oversight on Team Trump — even as the politics align with their supposed principles.

The long knives have long been out for Carson. Conservatives have complained for months that he has been too slow to roll back Obama-era policies against housing discrimination, calling him a traitor to conservative principles. Seems this latest Carson scandal is the perfect opportunity for Republicans to demand he be kicked to the curb.