Spotify goes public: Here's everything you need to know 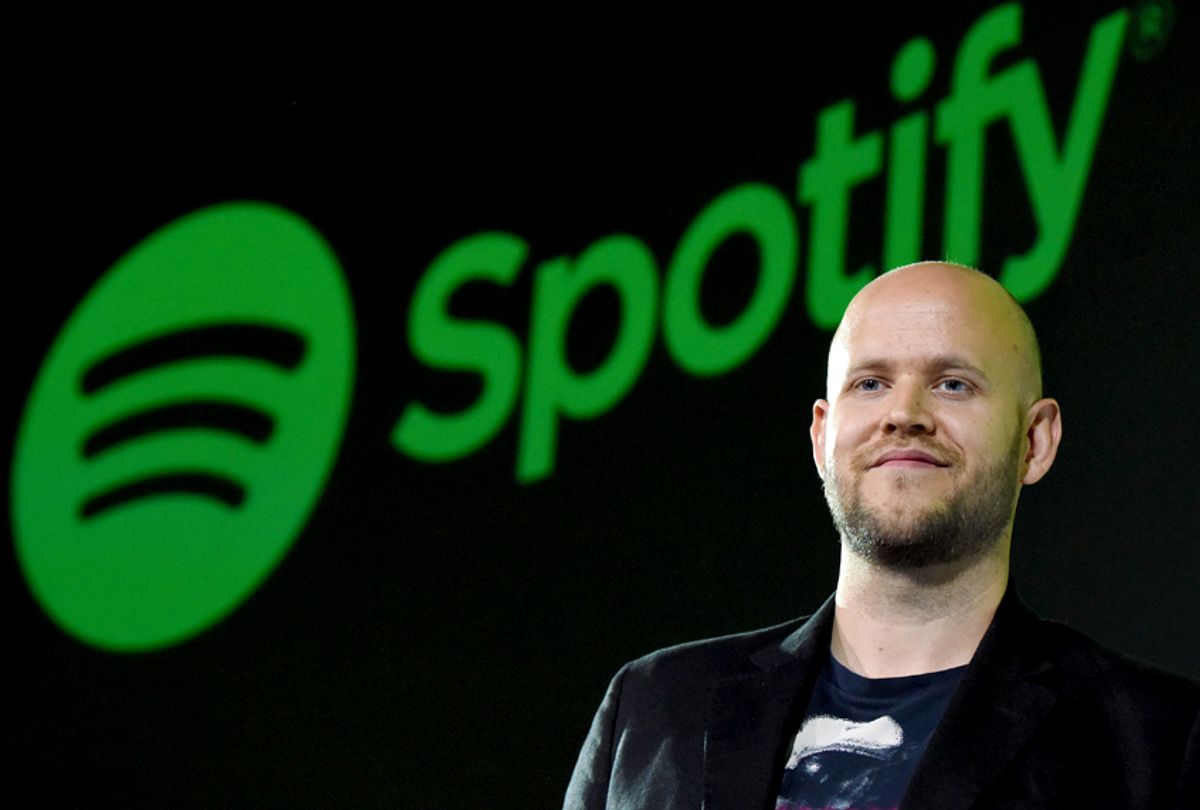 After ten years as a private company, Spotify announced Wednesday that it plans to go public, filing paperwork for a $1 billion initial public offering.

The Swedish start-up will begin trading on the New York Stock Exchange under the ticker name “SPOT.” According to the company’s SEC filings, shares have traded as high as $132.50 on private markets, which would give the company a valuation over $23 billion as of Feb. 22.

Here are the six biggest takeaways from Spotify’s SEC filings:

Spotify is bigger than Apple Music

Spotify is the apparent industry leader in the U.S. among streaming music services, with the company reporting 71 million paid subscribers and more than 159 million active users as of Dec. 31, 2017. Its closest competitor, Apple Music, trails far behind with 36 million paid subscribers, the Wall Street Journal reported last month. Amazon Prime Music, the third-largest digital music service, has 16 million subscribers, according to MIDiA research, a U.K.-based media and technology analysis company.

Although Spotify rules the industry when it comes to on-demand streaming music, it’s now beset with the same problem many public internet companies, including Snap – and until last quarter – Twitter, have faced before: a business model that doesn’t show a clear way to profitability. In addition, Spotify’s two biggest competitors – Apple Music and Amazon – can both afford to run music services without ever seeing a penny.

The platform has editorially-curated playlists, like “Good Vibes” and “Rap Caviar," as well as an algorithm that generates personalized playlists for users with titles such as “Discover Weekly,” “Daily Mix” and “Release Radar.”

Several artists agree that Spotify’s playlists carry tremendous influence. Nick Perloff-Giles, best known as Wingtip, a Los Angeles-based producer, has experienced this power first-hand. With more than 32 million streams on his breakout single “Rewind,” Perloff-Giles attributes the song’s virality to the streaming platform. In an interview with Salon, he says his success “was 100 percent thanks to Spotify.”

The producer released “Rewind” in September 2016, just several months after graduating from Columbia University. (He recorded and produced the song in his college dorm.) The single was added to Spotify’s “Young & Free” playlist, which has nearly one million followers. Despite having no name recognition at the time, Perloff-Giles logged more than one million streams in two weeks. One month later, the producer was getting messages from record labels, offers to play music festivals and tentative publishing deals, leading him to quit his marketing job to pursue music full-time.

“We believe there is a large opportunity to grow users and gain market share from traditional terrestrial radio … With a more robust offering, more on-demand capabilities and access to personalized playlists, we believe Spotify offers users a significantly better alternative to linear broadcasting.”

Currently, Spotify offers a radio-streaming feature, “which grows and evolves along with a users’ taste and choices. Our radio feature uses algorithms that take a user’s chosen song or artist to create an online radio station."

Spotify aims to extend its reach beyond music

The company said, “We are an audio first platform and have begun expanding into non-music content like podcasts. We hope to expand this offering over time to include other non-music content, such as spoken word and short form interstitial video.”

Matt FX Feldman, a celebrated DJ and record producer best known as the music supervisor of the hit Comedy Central show “Broad City," agrees that Spotify is tremendously powerful, especially when it comes to musicians or music groups not under contract with a record label. “Spotify, as a platform, has been a massive help to independent artists … Anything that can increase that platform, anything that can create more opportunities, I’m down for,” he told Salon.

Spotify says it has “even bigger aspirations”

Daniel Ek, the co-founder, CEO and chairman of Spotify, said in the filing: “We envision a cultural platform where professional creators can break free of their medium’s constraints and where everyone can enjoy an immersive artistic experience that enables us to empathize with each other and to feel part of a greater whole. But to realize this vision, professional creators must be able to earn a fair living doing what they love, where monetization is at the core of a creative proposition and not an afterthought. We care deeply about our creators and our users and we believe Spotify is a win-win for both.”

Is Spotify too big to fail?

The company faces challenges to its business model, including fluctuations in the royalty rates it pays to music labels, publishers and songwriters, as well as general changes in music industry and law. (In January, the company was hit with a $1.6 billion copyright lawsuit over its failure to properly license thousands of songs before making them available to stream, including titles by Tom Petty, Neil Young and The Doors.) These problems are on top of the company’s bigger, more general problem of becoming profitable.

Nevertheless, streaming now accounts for more than half of the majors’ digital revenue, according to an industry survey by PwC, and Spotify dominates the streaming market with more than 159 million monthly users – and growing.

In preparation for going public, Spotify announced a licensing deal last April with Universal Music Group. The deal would allow some artists to restrict new albums to paying subscribers for the first two weeks of release, while letting free users listen to singles. In exchange for the paywall, Spotify may get a break on fees from Universal. The partners hope the paywall will further increase Spotify's number of paid subscribers. As Spotify touts that already sky-high number, it seems as though the company is successfully attracting consumers willing to pay $10 a month.