Astonishingly fast and hard to detect or stop, hypersonics could pose a new threat to superpower security 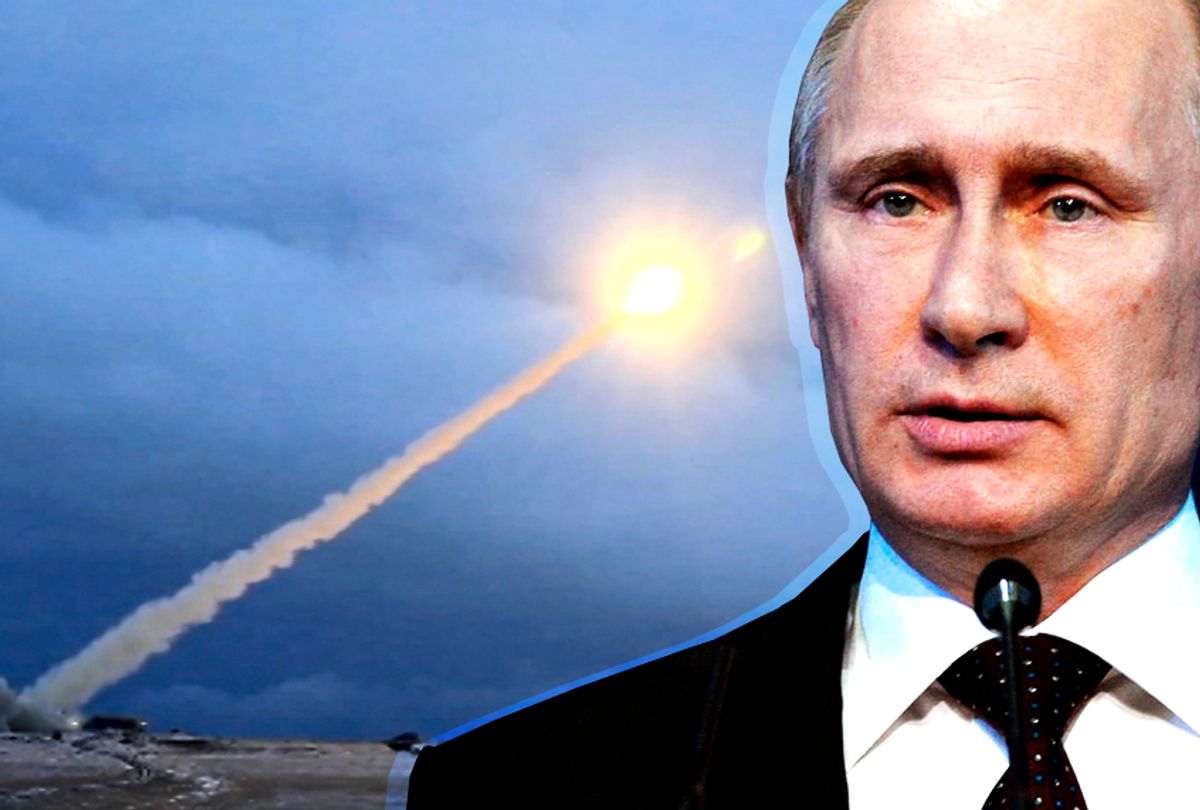 Long a dream of military engineers in the United States, Russia, and China – who each point to the other’s work as justification for their own -- hypersonics by all accounts pose a risk of altering the strategic calculations that have helped push off any direct conflict between nuclear powers.

Hypersonics can reach speeds of more than five times the speed of sound, travel much lower in the atmosphere than traditional ballistic missiles, and maneuver midflight. The potential advantages are clear: Hypersonic missiles would allow a nation to strike an adversary in a matter of minutes. The weapons’ low trajectory allows them to travel much farther and more stealthily than other missiles. And their maneuverability allows them to evade missile defenses that nations might spend billions of dollars to create.

Besides the three superpowers, France and India are among the nations in pursuit of the complicated and challenging technologies needed to field a battle-capable hypersonic missile. None have yet to achieve one. To the contrary, the pursuit has been marked by some spectacular failures. In August 2014, for example, the U.S. Army deliberately destroyed a test weapon over the Gulf of Alaska after about four seconds into an errant flight. Chinese tests have failed similarly. Russian tests have failed, too.

While the U.S. Navy announced a successful test of a prototype hypersonic missile in November, the fielding of such an American weapon is considered years away. And Putin, in his speech, obviously wanted to change the narrative of a long-distance race between peers by abruptly placing Russia ahead of the U.S. and China. He alluded to multiple hypersonic weapons systems that he claimed were in trial deployment or final testing.

One was what Putin called a hypersonic warhead for Russia’s new Sarmat intercontinental ballistic missile, which Putin said “can attack targets both via the North and South poles.” The Sarmat isn’t operational yet, but Putin noted its ability to carry a “broad range of powerful nuclear warheads” and evade a robust Western missile defense system.

Putin did not set a timeline for the Sarmat’s deployment, but a video of the test and animation he showed indicate it’s either on track to be deployed in 2020, as previously announced, or ahead of schedule. A potential hypersonic warhead for such a missile would not follow a parabolic trajectory to impact its target, but would instead flatten its trajectory after reentering the earth’s atmosphere, behaving instead like a cruise missile. It would be flying at such incredibly high speed and such a low altitude that radar would have a hard time tracking it, and defensive weapons would have a hard time engaging it.

Such a weapon reaches "its target like a meteorite, like a ball of fire," Putin said, at twenty times the speed of sound. This hypersonic glide weapon has been in development since 2004, Putin said, but he did not set a timeline for deployment.

A more ambitious Putin claim concerned the Kinzhal, or Dagger, missile. It’s the latest version of a missile that’s been in development since the 1980s. Carried by aircraft, Putin claimed that the Kinzhal’s latest iteration can deliver either a nuclear or conventional warhead at a distance of more than 1,200 miles. In an animation shown during Putin’s speech, the Kinzhal missile destroyed a fleet of navy ships.

The Kinzhal travels at ten times the speed of sound and has been, Putin said, in trial service at airfields in southern Russia since December 1. If Putin’s claims are accurate, the Kinzhal would indeed put Russia ahead of its nuclear-armed state competitors — and he knows it. “It is the only one of its kind in the world,” he boasted.

Pavel Podvig, director of the Russian Nuclear Forces Project in Geneva, said that may be the case. “It appears that they’ve demonstrated the capability” to develop a hypersonic missile, Podvig said. He remained uncertain, however, if “it actually provides Russia with any useful and meaningful military capabilities.”

James Acton was more worried. Co-director of the nuclear policy program at the Carnegie Endowment for International Peace, Acton has done extensive research and writing about the hypersonic arms race. Right around the time Putin made his statements Thursday in Russia, Acton wrote on Twitter that the remarks were “clearly bad. But how bad? An accurate word-for-word translation is critical here.” Two hours later, word-for-word translation in hand, Acton tweeted a follow-up: “Having now seen a rough translation, I'm going for: really, really bad.”

That indicates three things: First, that Russia has apparently moved forward with a hypersonic missile that’s less accurate than what the U.S. is developing. Second, that Russia remains squarely focused on delivering nuclear warheads. And third, that Russia and the U.S. aren’t actually competing on the same ground.

“If you want to think about this as a horserace, frankly the U.S. and Russia are running different courses,” he said. “The Russian course is much shorter and easier than the course the U.S. has embarked upon. And I imagine that if the U.S. wanted to deploy a nuclear-armed hypersonic glider, they could do so without much difficulty.”

Whether the race is with horses or armaments, the U.S. remains fully engaged.

“We very much acknowledge that we’re in a competition with countries like China and Russia,” said Steven H. Walker, director of the Defense Advanced Research Projects Agency, in a panel discussion with defense reporters on the morning of Putin’s speech.

“I’m not going to confirm or deny President Putin’s statements,” he said, “but I think it’s been widely reported that China and Russia are active and have been developing capabilities in hypersonics.” Walker said DARPA, too, has been developing such capabilities for decades.

In a stair-step process, as Russia and China have pushed ahead, the United States has increased its own efforts, at a growing expense. Last spring, Walker said, DARPA lobbied then-United States Deputy Secretary of Defense Robert O. Work to help fund a national initiative to increase funding for hypersonic capabilities. Then in fall 2017, DARPA asked the Trump administration for additional hypersonic-specific funding.

Its plan largely succeeded. According to figures provided by DARPA, funding for hypersonic initiatives in 2017 stood at $85.8 million. That increased by 27 percent to $108.6 million in the 2018 budget. “I don’t think we got everything we wanted,” Walker went on, “but it was a good first step.”

The increase in spending on the U.S. side and the bluster from Russia is a familiar back-and-forth, said Daryl G. Kimball, executive director of the Arms Control Association in Washington D.C.

“States with advanced military technologies view them as advantageous when they have a monopoly on their possession, but they can become problems down the road,” Kimball said. This occurred with ballistic missiles, too, Kimball said: Germany developed the technology; the United States and Russia raced to catch up; and eventually a swarm of other countries followed. Today, 31 countries possess ballistic missiles. Hypersonics are the latest technology in this cycle, Kimball said. And if halting hypersonic one-upmanship between the U.S. and Russia is a goal, prospects seem bleak.

In his speech Thursday, Putin justified Russia’s pursuit of hypersonics by noting that the U.S. withdrew from the Anti-Ballistic Missile Treaty in 2002. In a statement Thursday, White House Press Secretary Sarah Huckabee Sanders responded similarly, noting that Russia has been developing “destabilizing weapons systems for over a decade in direct violations of its treaty obligations.”

Acton says the problem is that hypersonics weapons – which pose a new type of threat -- “make arms control a lot harder, they make an arms race a lot more likely, they feed a more antagonistic relationship, and that in turn makes crisis and conflict and ultimately nuclear use more likely. So people are going to focus on yet more ways that Russians can kill Americans. That’s right ultimately, but not because they don’t already have the ability to do it anyway. It’s because these systems make managing U.S. Russian strategic relations harder, and makes a breakdown in deterrence — i.e. nuclear war — more likely.”

The Center for Public Integrity is a nonprofit investigative reporting organization in Washington, D.C.