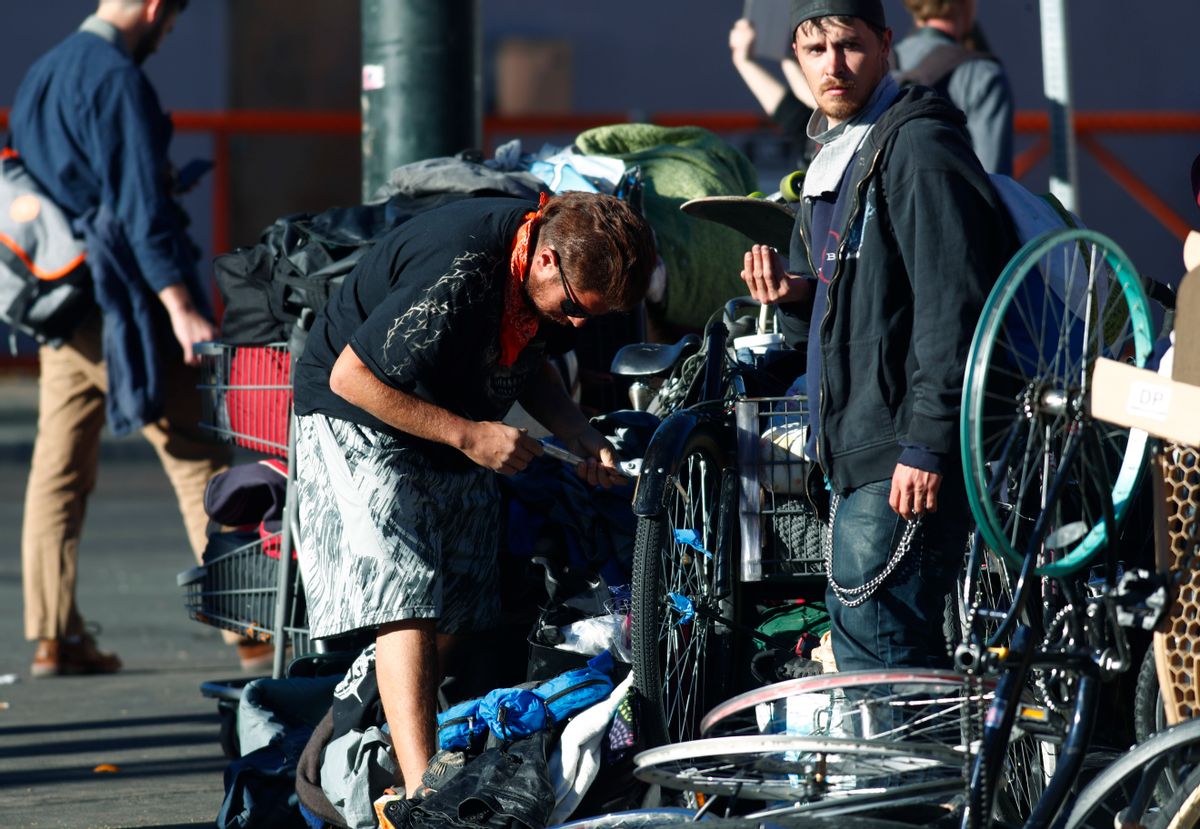 Unidentified men pack up their belongings during a sweep of homeless people who were living on the walks surrounding a shelter near the baseball stadium Tuesday, Nov. 15, 2016, in downtown Denver. new report from The National Law Center on Homelessness and Poverty said Tuesday, Nov. 15, 2016, that cities nationwide such as Denver are enacting more policies that criminalize homelessness. (AP Photo/David Zalubowski) (AP)
--

Homelessness increased in the U.S. in 2017 for the first time since 2010, and advocates for homeless people are alarmed. Ten city and county governments have declared states of emergency since 2015 in response; meanwhile, Department of Housing and Urban Development head Ben Carson shows ongoing disinterest in supporting local governments’ efforts. While cities like Los Angeles are facing a well-publicized crisis as they struggle to find long-term solutions, California is surprisingly not even one of the states with the five fastest increases in homelessness, according to a new survey compiled by Credit Loan.

Measuring homelessness in any city is a challenge. For one, most major cities count more homeless people in residing shelters than unsheltered people living on the street or in encampments (Los Angeles is a major exception). This survey includes both sheltered and unsheltered, but notes the frightening rise in unsheltered homeless (nationwide, about a third of the homeless lack shelter).

“Unsheltered homelessness is on the rise, and major cities are feeling it most,” said Nan Roman, president and CEO of the National Alliance to End Homelessness. “As cities bear the burden of increasing unsheltered counts, it is essential that they address the affordable housing crisis, increase investments in proven housing interventions, and ensure that they have appropriate emergency shelter capacity.”

Beyond the division of sheltered versus unsheltered, experts disagree on the best methods of measuring rates of homelessness. The Credit Loan survey uses a point-in-time (PIT) count from HUD data that communities collect from physical outreach to determine how many individuals are literally homeless on a designated day. This data is pulled from PIT count numbers from 2007-2016. Other groups like the Michigan Coalition Against Homelessness prefer to rely on the numbers generated through statewide data systems to measure homelessness in their states.

According to the Credit Loan survey, these are the states that saw the most significant increases and decreases in homelessness over the past 10 years:

The states vary significantly in geography and cost-of-living expenses (South Dakota, for example, is one of the least expensive states to live in, yet the same factors drive that state’s homelessness as in New York), but there is a surprisingly strong common thread explaining why so many people go without homes. In any city or state, the homeless crisis is directly tied to lack of available low-income housing.

A number of diverse factors make the situation in South Dakota unique. The state has seen the largest increase in homelessness in the past 10 years. Native American homeless rates are rising as it becomes more difficult to find affordable housing on reservations, where isolation and lack of abundant infrastructure make construction difficult. Elsewhere in the state, homeless advocates have noticed the homeless population getting younger.

Traci Jensen, homeless liaison for the Sioux Falls School District, told KSFY in December, "We do see the number of youth over the last couple years has increased." Though a different estimate at the end of 2017 claims the homeless rate had dropped 12% in the past year in South Dakota, three shelters say that number doesn’t tell the full story. "The demand that we see for homeless services certainly hasn't decreased," Brett Johnson with the Sioux Empire Homeless Coalition, said. Many of the area's homeless are living in cars or with friends, Johnson added. Local representatives are pushing for more inexpensive housing options. Rep. Kristi Noem recently wrote, “Despite South Dakota’s relatively low cost of living, finding affordable housing can still be a challenge for low- and middle-income families. That makes it no surprise that there are 120 families on the waiting list for Habitat Homes.”

In densely populated metro areas like D.C. and New York, homeless advocates are unanimous in blaming the problem on sky-high rents. “The one single thing that really has changed is the lack of affordable housing,” Michael Ferrell, the executive director of the Coalition for the Homeless, told the New York Times. “The housing that’s being created today in the District is not for working-class people,” he said. Gradually widening inequality is to blame: in D.C., as in many other American cities, the rich are getting richer and the poor poorer. In New York City, the Coalition for the Homeless similarly reports that lack of affordable housing is the main cause for the city with the highest number of homeless people. Homelessness in New York City has reached the highest levels since the Great Depression in the 1930s, according to the Coalition for the Homeless.

There is some good news in the struggle to house the homeless. Though Michigan is hurting from the nationwide lack of affordable housing, the state managed to decrease its homelessness rate by 67% over the past 10 years, according to the survey. “We saw the incidence of homelessness spike during the recession and it’s been trending downward each year since in Michigan,” Eric C. Hufnagel, executive director of Michigan Coalition Against Homelessness, told AlterNet. “That’s due in part to a short-term funding infusion, an improved economy and policies which have strengthened the homeless service delivery system in Michigan. Additional funding remains a key need, but there are many other barriers to ending homelessness, including the affordable housing crisis.”

These are come of the cities with the most homeless:

New York City shelters are notoriously crowded, and the city has seen an enormous increase in its shelter populations over the past 10 years. But out on the streets there are slightly fewer homeless than a decade ago. Still, the city's $1.2 billion per year investment in curbing homelessness has not reversed the trend of a rapidly rising homeless population.

In Los Angeles, a near opposite crisis is underway. The number of unsheltered homeless in L.A., like those in the city’s widely noted encampments stretching miles across the metro area, has climbed significantly in the last few years. According to Credit Loan, “the largest increases have been among those aged 24 and younger, and a vast majority of the unsheltered homeless population are either African American or Hispanic. Like New York City, Los Angeles officials indicate rising housing costs as largely to blame for the dramatic upsurge. Between 2000 and 2015, the median rent in L.A. increased by more than 30 percent.”

In any city or state, the homeless crisis is directly tied to lack of available low-income housing and the expanding divide between rich and poor.

“Ending homelessness is a complex, long-term effort,” said Nan Roman of the National Alliance to End Homelessness. “For several years we’ve seen homeless systems become more efficient and effective and getting people into housing. But the effectiveness of the homeless assistance efforts cannot make up for the increasing number of people who become homeless because they simply cannot afford housing."

Megan Hustings, director of the National Coalition for the Homeless, agreed, noting that the Trump administration shows no signs of prioritizing the crisis. "There is a severe shortage of decent affordable housing across the country," Hustings told AlterNet. "Our housing infrastructure is extremely damaged, and the presidential administration’s 'infrastructure' plan does little to nothing to improve it. In fact, the president’s suggested FY19 budget would almost completely eliminate public housing, and cause over 200,000 families to lose their housing vouchers."