A Florida project for art as "a basic human right"

The NOMAD bus takes patrons on a different kind of journey 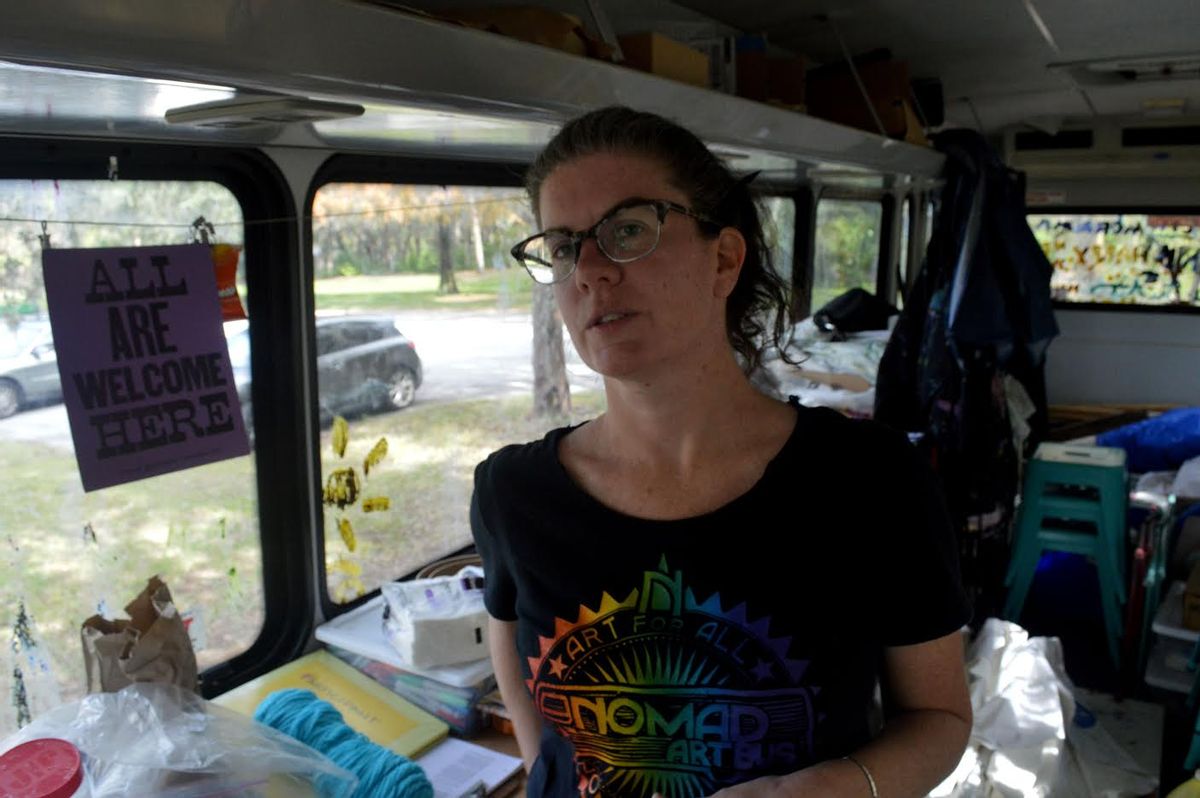 On New Year’s Eve, Carrie Boucher parked a bus at a St. Petersburg festival. Then, over the course of roughly five hours, a crew of volunteers and teaching artists helped nearly 750 participants fill up paint cups and tie aprons, and offered art suggestions as people let their imaginations brush-stroke over the bus before the ball dropped.

On this day in January, that paint still covers the bus. Yellow drips and purple splotches dot the exterior. Among the designs, a participant scrawled the words "fCC" and "net neutrality."

“We encourage expression of all kinds,” said Boucher, Founding Artist and Director of The NOMAD (Neighborhood Oriented Mobile Art + Design Studio) Art Bus Project. “We try to stay away from politics or religion, but sometimes they end up on the bus.”

Born in Detroit, Boucher moved to Seminole, Florida, at age 10. After high school, she went to Chicago for art school and spent 10 years in the city. Her last winter there, she survived two blizzards and decided to move back to Florida. She's been there since 2011.

With a background in fine art, Boucher hadn’t planned to become a socially engaged artist. But she wanted a shift in studio practice, so she transitioned into teaching. For a year she taught art in an elementary/middle school setting, but became disappointed by arts funding in the school system.

“The lack of access to art started in schools but then branched outward to marginalized populations,” she said.

Boucher said Tampa Bay offers “great, free art programming,” but recognized these programs were mostly brick and mortar that required people to travel to them. She soon started a conversation on social media about a traveling art classroom.

“I knew the project was going to have to be something that was mobile,” she said, “something that is really accessible and not intimidating.”

NOMAD has worked in the community for nearly four years. The art bus is one project of NOMADstudio, which has a street team of about 200 people.

“We consider art expression as a basic human right,” said Sara Norine, a NOMAD teaching artist. “The community has input on what we’re doing and why we’re doing it.”

The NOMAD team, Boucher said, creates different series for groups of kids who live in a communities with a high concentration of poverty. These workshops include techniques in mediums such as weaving, mixing colors, and printmaking.

Boucher said the organization doesn’t like to “parachute in and do one program then never see us again.”

Over the past four years, NOMAD has worked with around 1,400 kids in foster care, 1,300 residents of halfway houses, and over 700 preschoolers who live below the poverty line. “We’re not going to fix needs not being met with art,” she said, “but you might learn something about yourself and make you feel strong, which could put you in a situation to better deal with it.”

NOMAD teaching artist Evan Neidich has volunteered at the group foster home and helped with a five-week session that culminated with, she said, “a big bus painting.”

“Something that’s really special about the bus painting is the communal aspect,”said Neidich. “Watching people paint the bus is the most joyful and exciting thing.”

Most people know the bus for its exterior paint, which started as a way to engage those who waited in line to do a workshop inside the bus. “The paint on the outside was not part of the original vision,” said Boucher, “but it has become important to what we do.”

Boucher estimated there have been about 28,000 direct interactions between the bus and community. The project is currently on its second bus; the first donated bus died. They’re currently working to build the in-bus classroom the way they want it.

NOMAD depends on private donations, and Boucher recognizes a growing need for art expansion in the area, so she plans to begin to “aggressively go after grants.”

“We want people to experience the making and creativity of tapping into it,” she said. “It takes all of us to make this big thing work.”