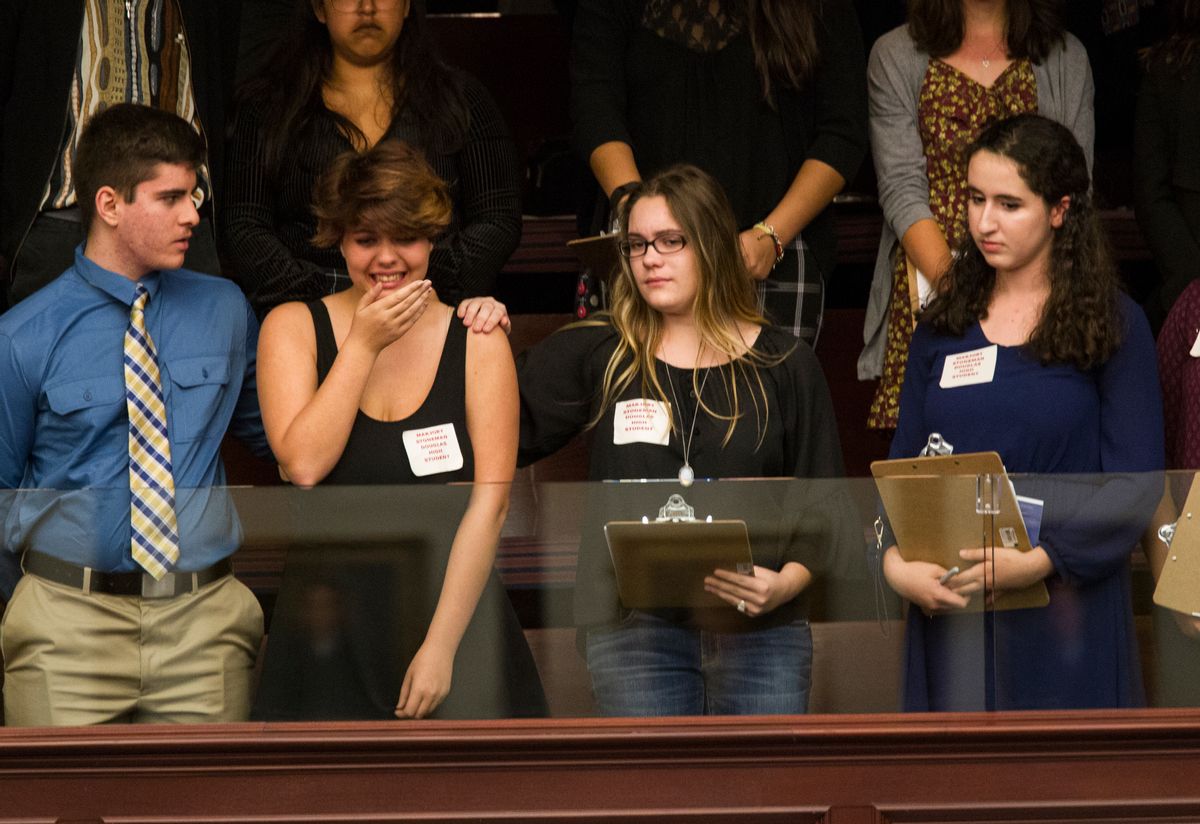 Sheryl Acquarola, a 16 year-old junior from Marjory Stoneman Douglas High School is overcome with emotion in the east gallery of the House of Representatives after the representatives voted not to hear the bill banning assault rifles and large capacity magazines at the Florida Capital in Tallahassee, Fla., Tuesday, Feb 20, 2018. (AP Photo/Mark Wallheiser)
--

Surely, you’ve seen the pictures. A handful of Marjory Stoneman Douglas High School students watched in dismay as the Florida House blocked debate on a bill to ban assault rifles, less than a week after 17 people were gunned down at their school.

“I’m calling on every student/teacher/parent 2 exercise 1st Amendment Right & engage in sit-ins, protest, walkouts & legal demonstrations. NOW IS THE TIME,” state Democratic Rep. Kionne McGhee tweeted Wednesday, when his procedural move that would have allowed the Florida House to debate the bill was shut down.

While pollsters and political observers across the country are saying the political response to the nation’s latest mass shooting will be different because young people are speaking up, organizing and calling for gun controls in unprecedented manners — including mass demonstrations in Tallahassee Wednesday — there is a hard truth behind the Florida House’s cold-hearted, high-profile snub.

“To the young people getting woke to the politics of gun control, here’s the reality: The old farts who are elected to office don’t give a damn because you don’t vote,” tweeted Michael McDonald, a University of Florida demographer and nationally known voter turnout expert. “Average midterm turnout rates for ages 18-29 is a pathetic 20 percent. If you want to change the world start by voting.”

And this generational apathy has only gotten worse, not better, over time.

McDonald isn’t trying to be the grim reaper at a moment of great trauma for students who experienced a mass shooting. There’s a rising tide of support nationwide elevating the teenagers' call for reasonable gun controls, which is seen in celebrity donations for their marches and other protests.

But he raises a salient point. Florida may be a purple state demographically — evenly split between Republicans and Democrats. But the GOP has dominated its statewide politics for most of this decade, and the legislature has a record of blocking gun controls, including pre-empting gun laws that remain in municipal law books.

In other words, Florida Republicans know they can ignore young people's demands, or patronize them, because when they look past the latest wave of outrage and protests, the historic pattern is this slice of the electorate largely doesn’t turn out and vote — especially during non-presidential years like 2018.

Thus, the Florida House overwhelmingly voted Tuesday to block debate on a bill to ban the category of weapon used in the latest massacre. But as the South Florida Sun Sentinel noted, its legislative leaders are looking at more watered-down proposals, such as possibly "raising age restrictions for gun purchases" and "temporarily taking away someone's guns if they are deemed a threat.”

Maybe this latest mass shooting will be different and will galvanize a new wave of political advocacy. But that usually is a longer game and involves voting every time there's an election.

That hasn't been the pattern for young people. Indeed, demographic voter turnout analyses from the U.S. Election Project, which McDonald oversees, notes that twice as many people under age 30 vote in presidential years as in midterms. In presidential elections, 40 percent of eligible voters under age 30 typically cast ballots. In midterm years like 2018, it’s under 20 percent.

That doesn’t mean younger people don’t care about politics and aren’t voting. It’s just that their numbers are poor in midterm years and creeping up slowly in the presidential years. For example, in 2016 the Pew Research Center found the electorate’s age was skewing toward younger generations, as opposed to what's been historically larger numbers by seniors and the elderly.

“Millennials and Generation Xers cast 69.6 million votes in the 2016 general election, a slight majority of the 137.5 million total votes cast,” Pew reported. “Meanwhile, Boomers and older voters represented fewer than half of all votes for the first time in decades. The shift has occurred as Millennials accounted for a growing share of the electorate and as those in the Silent and Greatest generations aged and died.”

But going back to the Florida House’s refusal to debate a bill banning assault rifles and high-capacity magazines, it’s not hard to parse the GOP majority’s thinking. They know the people calling for new gun controls are part of a generation that historically doesn’t turn out in significant numbers, especially in midterm years. Young people may be massing in the state capital and demanding action on Wednesday, but whether their voter turnout patterns will change remains to be seen. For now, the Florida GOP is betting they will forget about voting later this year.