John Oliver breaks down exactly what NRA TV's purpose is. (Spoiler: It's to sell a whole lot of guns.) 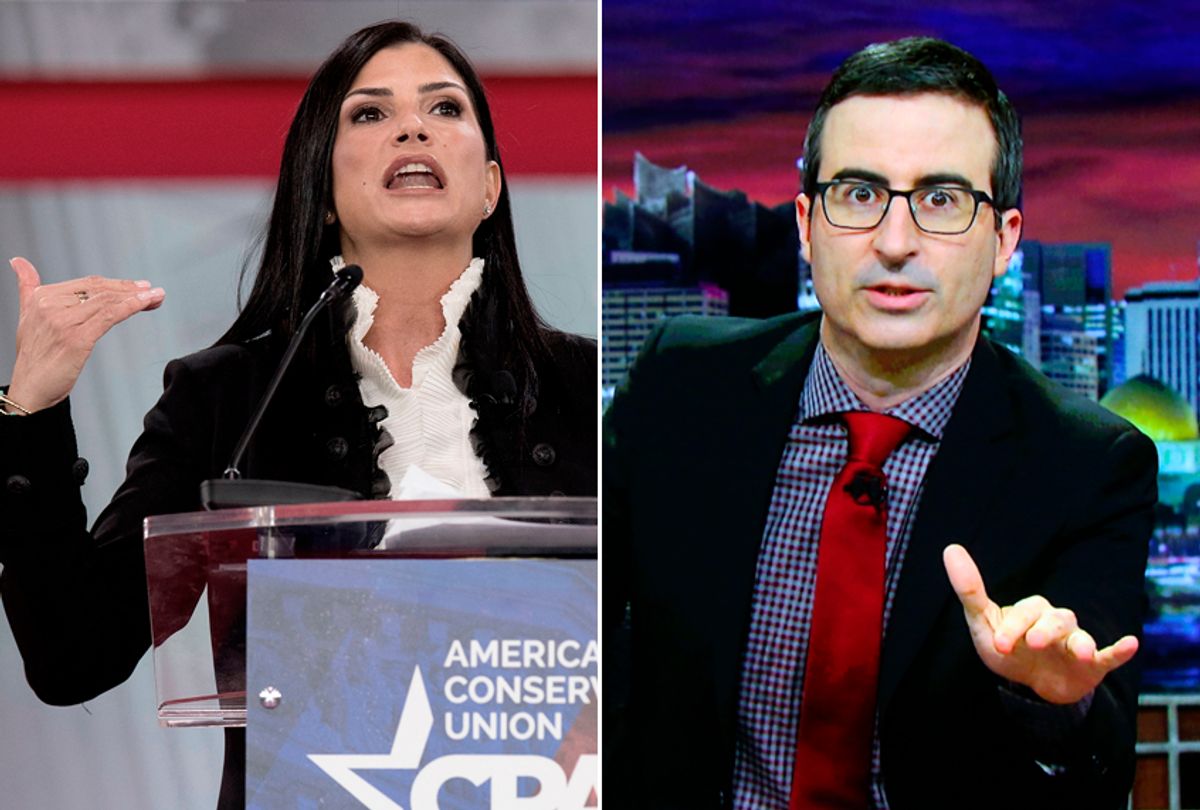 "We've had enough of the lies, the sanctimony, the arrogance, the hatred, the pettiness, the fake news," National Rifle Association spokesperson Dana Loesch says in a recent NRA TV video while standing next to a ticking hourglass. Loesch's words were directed to "every lying member of the media, to every Hollywood phony, to the role model athletes who use their free speech to alter and undermine what our flag represents," to politicians and late night hosts – and the list didn't end there. Released on Oscars night, it's a new message that warns, "Your time is running out" – an obvious dig at the Time's Up legal defense fund.

“To every lying member of the media, to every Hollywood phony, to the role model athletes who use their free speech to alter and undermine what our flag represents…Your Time is running out. The clock starts now."
–@DLoesch #Oscars90 pic.twitter.com/SDVjeTxyfB

This sort of hyper-dramatic messaging is Loesch's trademark, and her rhetoric has only intensified since the NRA went on defense after Parkland activists reignited the gun safety debate and major corporations severed ties with the pro-gun organization in the aftermath of the tragic Florida high school shooting. Sunday's episode of "Last Week Tonight with John Oliver" on HBO moved away from the battle for sensible gun laws, instead focusing in on Loesch and the NRA's so-called TV network. "With all of the discussion this week of boycotting NRA TV, we thought it might be worth answering the question: What the f*ck is that?" Oliver said.

Oliver showed how NRA TV's programming extends far beyond Loesch's bizarre viral videos with "needlessly aggressive metaphors" to darker content with cinematic thriller scores added for dramatic effect. For example, "Death is an undeniable fuel of life," one voiceover says. And Oliver compared that grim piece of programming to receiving "a deranged letter from a serial killer."

There's the "gun bros," as Oliver labels Dom Raso. Then there's the sheer amount of content geared towards women, like the show "Armed & Fabulous," to whom firearm accessories are readily marketed. "The NRA's actually making a big push for women, and they are pretty clear about their motivations," Oliver said. He turned to a clip from the NRA Women channel featuring Melanie Pepper, part of the NRA's women leadership forum, who made this disturbingly transparent statement: "If you get the women, you get the family."

The "defining characteristic of the network is painting a bleak vision of America with threats around every single corner and one solution," Oliver said. An infomercial-like roundup of NRA TV content showed hosts warning of everything from gun cartels to "ISIS sympathizers," sex-trafficking, "urban riots" and more. Of course, AR-15s provided the only apparent solution.

The bottom line: To watch NRA TV, Oliver said, is to watch stories "amplified to terrify you and sell you products." He then revealed how much of NRA TV's content is sponsored by gun brands– and that the entire network is anchored by an ad agency.

"The whole point here is — the answer to the question, 'What the f*ck is NRA TV?' — is it's just a vessel to sell American guns, that's pretty much it," Oliver concluded. "There's a lot to be concerned about regarding the NRA's activities, but NRA TV might actually be the dumbest, most transparent thing that it does."