Season 2 of the Netflix drama combines an origin story with its meditation on trauma. But to what end? 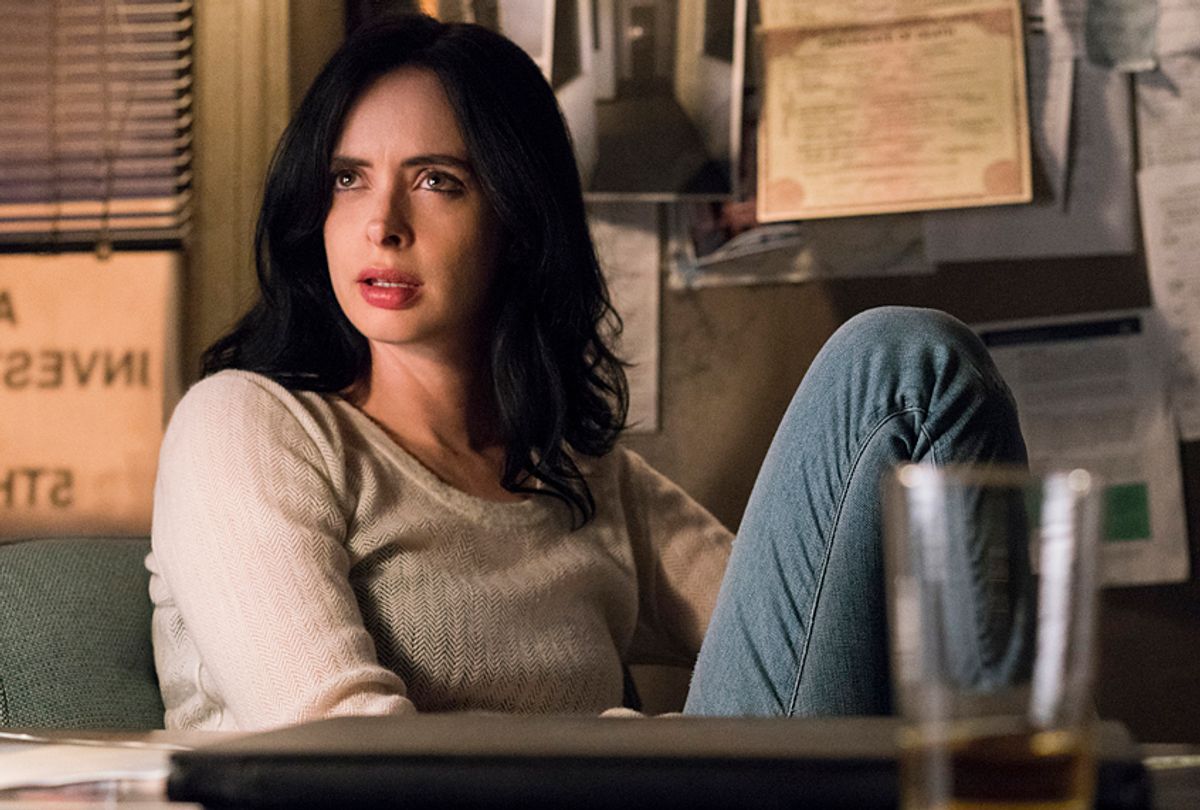 Before leaping into an analysis of everything that makes the first five season two episodes of “Marvel’s Jessica Jones” one of the most worthwhile things you’re likely to watch this week, pardon me for indulging in a bit of insider-ish license.

You see, Netflix offers only a few episodes of each Marvel series to some reviewers prior to every new season. This is fairly typical of many channels and streaming services, and a few are better than one or none at all. But as of late, Marvel’s Netflix series all follow a certain cadence that essentially guarantees that the show will begin one way and end in quite another — and not always well.

For example, viewers may be seduced into following, say, the journey of a complicated and empathetic villain such as Mahershala Ali’s Cottonmouth, the excellent antagonist initially featured in “Marvel’s Luke Cage,” only to have him switched out for a less interesting foe who makes the final episodes nearly unbearable.

We may have tuned in to season 2 of “Daredevil” only to be baffled by a couple of seemingly unrelated mythologies jammed together and competing for “A” story status, before one fizzles to the background to focus on the lesser.

This has happened enough times with Netflix’s Marvel titles to give me a touch of anxiety about what the unseen episodes of the second season of “Jessica Jones” will look like. Then again, if a consumer is feeling this way, one can only imagine the pressure showrunner Melissa Rosenberg must be feeling right now. Any time a series bursts into existence with a near-flawless freshman season, expectations for a sophomore run are invariably higher than they may be for other series.

“Jessica Jones” also carries the extra weight of returning in the midst of the #MeToo movement, and in the wake of “Wonder Woman.” Women are marching, are speaking up, are voicing their anger. Those seeking heroes who reflect their struggle and strength may not view Krysten Ritter’s motorcycle-jacket wearing, hard-drinking heroine as an ideal role model. But her role is just as vital, in that she stands as manifestation of the rage-driven side of ourselves so many of us have held inside.

Jessica Jones is that side of ourselves that we envision when we meet a slight with grace and forbearance instead of doing what we really want to do, which is to slam the offender through a wall.

In the opening episodes of the new season, dropping in its entirety on March 8 — that would be International Women's Day — it scratches that itch well enough. But in this new chapter Jessica isn’t up against a single antagonist.

She’s facing down a hidden history she’s spent a lifetime attempting to erase with booze, part of which involves a mysterious organization called IGH, which is responsible for forcibly imbuing her with powers she resents. This is on top of the thick coats of post-traumatic rage stemming from losing her parents and brother in a childhood car accident, and being exploited by a mind-controlling psychopath to do terrible acts against her will, including submitting to rape and committing murder.

Jessica has a lot on her plate this season, in other words. So does Rosenberg, whose writers and directors are charged with rolling out an origin story in addition to introducing a nebulous and ostensibly many-headed villain (as all evil organizations tend to be), with a plausible treatment of trauma survival that matches the conisideration and honesty of its first season portrayal.

These first five new hours of “Jessica Jones” handle that task well enough to keep our curiosity piqued enough to stick around for the other hours, and that already puts it ahead of the title’s less successful Netflix brethren.

Ritter’s gruff portrayal of Jessica also buys the series plenty of rope; something about her kohl-rimmed stare and seen-it-all tone of voice makes her crankiness and don’t-give-a-damn attitude charming, if that’s the right word. It helps us understand why her neighbor Malcolm (Eka Darville) refuses to let her push him away. It also provides a needed contrast to her crusading best friend Trish (Rachael Taylor), a radio host who aspires to break into the TV journalism world but may be held back by her own childhood baggage.

Darville’s Malcolm plays the part of Jessica’s Jiminy Cricket as ably as ever, but these new episodes lean into Jessica and Trish’s relationship more than the first season does in part because, as the story starts, Trish doesn’t have a secondary battle to fight. At times Trish’s raison d’etre in the series seems entirely based on her ability to bait and provoke, but this view discounts the honest platonic chemistry Ritter and Taylor display onscreen.

Like Malcolm, Trish reminds Jessica to behave humanely and admit that she gives a damn — a necessary element of a hero’s image.

That said, Jessica Jones’ unmistakable weariness in these new episodes infects the story itself. The storytelling has a staccato, uneven feel at first.

This could be due in part to the writers’ emphasis on drawing out the truth of who and what IGH is, and keeping Jessica’s initial quarry, played with stoic power by Janet McTeer, in the shadows for much of those opening hours. Season 1 shrouded David Tennant’s Kilgrave in a similar kind of mystery, and Tennant unleashed a singular malevolence through that character, sort of an egomania rooted in pettiness, that’s fairly difficult to top.

Adding on to this is a fairly extensive subplot involving Jessica’s frenemy Jeri Hogarth (Carrie-Anne Moss), the calculating lawyer who appears in other parts of Netflix’s Marvel universe. But here, she represents a “what if” form of Jessica — a woman who, like Ms. Jones, is a lone wolf who doesn’t trust anyone and thinks the worst of others, but channels that into career ambition and the pursuit of wealth and power.

In this respect, “Jessica Jones” sets up its second season to fascinate on a number of levels, and its heroine to represent the crucible through which all of her gender is passing in this moment. Jeri might be thought of a version Jessica taken to one extreme; McTeer’s character is obviously set up to represent another. Trish is Jessica’s opposite, the golden-haired golden girl to her dark brooding reluctant champion. Yet in many ways they’re all the same woman wearing different faces and dogged by the same problems.

Despite their best efforts, or the gifts bestowed upon them by fate or forced on them by science, none of them is invulnerable. They keep on throwing punches, in their own ways, because they have no other choice. And that’s more than enough to make the second season of “Jessica Jones” a series that speaks to how we’re feeling right now, regardless of where, and how well, this new chapter ends.