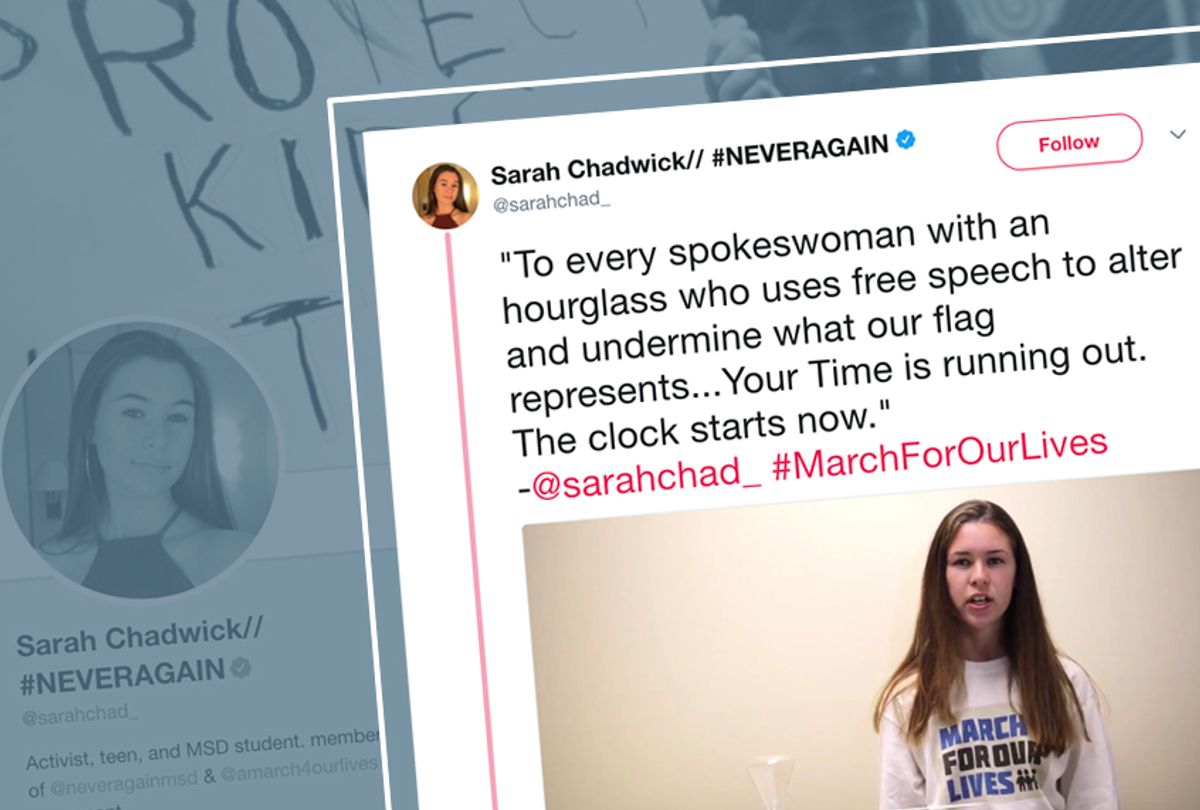 The student survivors of the shooting at Marjory Stoneman Douglas High School are continuing to speak out about gun control as they target the gun lobbying powerhouse, the National Rifle Association.

In a video that mimicked the tone and style of a recent NRA ad, Sarah Chadwick delivered a stern message: the clock is ticking for the pro-guns group.

"We've had enough of the lies, the sanctimony, the ignorance, the hatred, the pettiness, the NRA," Chadwick said. "We are done with your agenda to undermine the safety of our nation's youth, and the individual voices of the American people."

Chadwick rattled off all of those who stand in the way of progress, such as "every government official unwilling to take action and make change," "everyone with an 'A-plus' rating from the National Rifle Association" and "the politicians who would rather watch America's youth die than get assault rifles off shelves."

Her list went on and included "the manipulating lobbyists who think their political stances should be the only ones supported by legislation," "those who refuse to accept commonsense gun safety as a bipartisan issue" and finally "to those who call high school students paid crisis actors and refuse to listen."

"Your time is running out," Chadwick said. "The clock starts now."

The video promoted the "March for Our Lives" demonstration in the nation's capital on March 24. In the wake of the Parkland, Florida shooting, students have led the way and have demanded action be taken to prevent future tragedies.

Chadwick's video was a direct response to the recent NRA ad released on Monday, which featured the organization's spokeswoman, Dana Loesch, who followed a similar script but targeted "fake news."

"To every lying member of the media, to every Hollywood phony, to the role model athletes who use their free speech to alter and undermine what our flag represents . . . Your Time is running out," Loesch said in the ad. "The clock starts now."

The federal government response to the most recent mass shooting in America has resembled responses of the past; little or no action. Outcries from students have made some impact, but the ball hasn't moved much.

Florida state lawmakers, however, have drawn closer to passing a bill that would "raise the legal age for buying rifles, impose a three-day waiting period on all firearms sales and allow the arming of some public school personnel," according to Reuters.

President Donald Trump was nothing short of erratic on his stances in the immediate wake of the shooting. He at first blamed mental health, only to meet with bipartisan lawmakers and strongly support gun control measures that he later walked back, after he met with none other than the NRA.