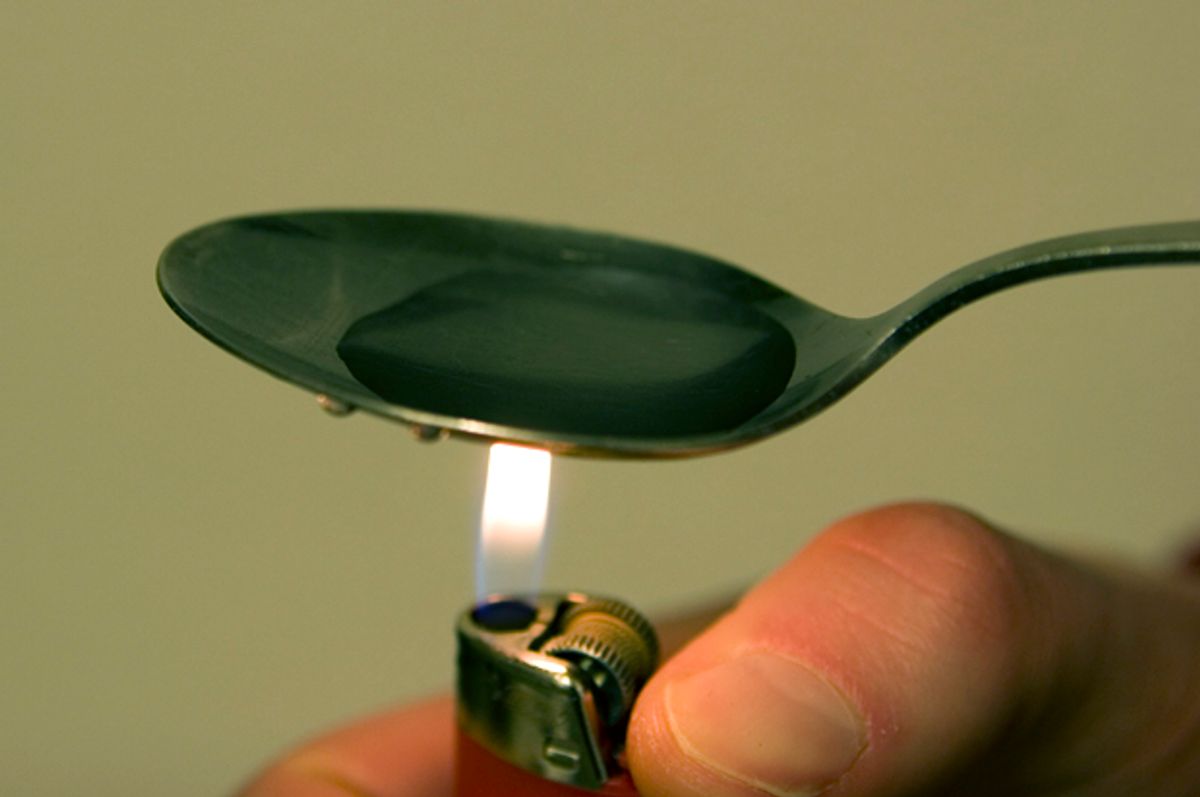 A hypodermic needle is not what you would expect to find if you reached for a worn copy of Harry Potter from a library’s bookshelf. And the last thing you would expect is to find a 25-year-old man dead in the bathroom. But for some guests at the Denver Public Library in Colorado, this was the reality. People were coming to the library to find a private place to inject drugs such as heroin away from the eyes of police. The needles were found in books, furniture, and on the lawn, and the man in the bathroom was found by staff in February 2017.

The Denver Public Library, searching for a humane solution, took action. To prevent any additional tragedies, the library trained many of its staff to use naloxone (brand name Narcan), the antidote to an opioid overdose. Over 300 staff now carry naloxone across the library’s different branches.

“Let me be clear,” Rachel Fewell, the Central Library Administrator of the Denver Public Library, told me. “Drug use of any kind in our library is illegal and a violation of our policies. But when we see it, we try to treat the people using our library as individuals and with respect. We try to connect them with the resources and services they need.”

Fewell explained that the library has social workers and peer navigators on its staff who try to help guests deal with problems such as addiction or homelessness. Guests can access these services for free during daily drop-in hours. She told me that the library has successfully reversed 15 overdoses since they equipped staff with naloxone last year, and there have been no more deaths.

The case of the Denver Public Library shows what compassion for drug users looks like. But it also illustrates the significant challenges heroin and other drug users face when they lack a secure place to consume. Denver is home to several thousand people injecting drugs every day, many of whom are homeless. In 2016, at least 20 people died of overdoses in parks, streets or bathrooms.

In response, local advocates have proposed creating a supervised injection facility (SIF) in Denver, a secure place for people to inject drugs such as heroin or methamphetamine in the presence of trained medical staff. Typically, people bring their own drugs while the facilities offer sterile syringes. Staff monitor people and carry naloxone to reverse any overdoses.

The SIF initiative in Denver began late last year after a special bipartisan committee in the state legislature proposed the idea. Their recommendation led to the proposed Senate Bill 40, which the legislature considered early this year. But progress hit a wall on February 14 after the Senate State Affairs Committee voted to indefinitely postpone consideration of the bill. The committee voted 3-2 along party lines, with the committee’s three Republicans voting to stall the creation of the facility.

The failed vote slows momentum for this ambitious solution to public drug use in Denver. No SIFs currently exist in the United States, though cities such as Seattle, San Francisco and Philadelphia are considering similar measures.

About 100 SIFs exist in 66 cities and nine countries globally. Vancouver, B.C. in Canada established the first SIF in North America, InSite, in 2003. A Canadian Medical Association Journal study showed that InSite’s users were more likely to use clean syringes and safe injection techniques, and more likely to seek addiction treatment. The facility, which intervened in over 1,700 overdoses in 2016, has never witnessed a fatality.

Colorado is in the news most often today for its thriving legal marijuana industry. But the state still grapples with a high opioid overdose rate that has increased dramatically in the past decade. In 2016, opioid and heroin overdoses caused 300 and 228 deaths, respectively. These numbers represent a 104 percent and 720 percent increase from 2001 numbers. But anyone who feared legal marijuana in Colorado would cause increased use of other drugs can breathe easy: Data show that opioid deaths decreased 6 percent in the two years following legal pot sales in the state.

Despite the political setbacks for supervised injection, advocates are pushing forward. Just across the street from the state capital in Denver, the Harm Reduction Action Center leads the fight for SIF, though they prefer the term supervised use space (SUS). HRAC delivers free services five days a week to the city’s injecting drug users. The agency, the largest of its kind in Colorado, provides clean syringes, STI/STD testing, and referrals to opioid substitution treatment.

Kat Humphries, the programs director for HRAC, operates the drop-in center in the mornings and works on data analysis in the afternoons. “We are pushing forward with any measures we can to keep people alive,” she told me. “What harm reduction means to us is meeting people where they’re at so we can ensure they live the best possible lives for themselves.”

The 15-year-old HRAC has operated its syringe access program for six years. In this time, the center has registered over 7,200 members and had over 95,000 visits, of which roughly half — 42,000 — resulted in requests for referral services.

“It’s a pretty strong argument that we need to provide these supplies to prevent HIV and Hepatitis C in our community,” Humphries said, “but we’re also just a secure place for people to access referrals and other social services when they’re ready for them.”

The other services HRAC helps its members access, either through the agency or its partners, include Medicaid, mental health treatment and PrEP. The center also holds two health education classes, and even helps its members obtain state identification.

But HRAC does more than just serve people injecting drugs; it actively engages them in its organization. About 60 percent of the agency’s staff are current or former injecting drug users. “That’s something that’s really important to us to,” Humphries said, “to make sure that the people in our community have a big say in how we’re run and are the ones running it to some extent.

“We don’t require our workers or volunteers to be abstinent from drug use to be in this space, and we have a very functional team. I think that speaks to allowing people to be who they are and meeting them where they’re at.”

Injecting drug users in Denver are at a heightened risk of overdose, both because of their use behaviors and the poor quality of their drugs. Heroin in Colorado has a unique composition, as Humphries explained to me. “You’re mainly dealing with black tar heroin here,” she said. “It’s expensive to snort or smoke, so most people here are injecting it. This puts them at a very high risk of overdose.”

The potent opioid fentanyl is used as an adulterant and is increasingly found in heroin in cities like Philadelphia and Boston, though not much in Colorado. HRAC members who test their heroin for fentanyl, using special testing strips provided by the center, often turn up mixed results. But even with less fentanyl, the quality of heroin in Colorado varies widely. “We know that the purity ranges hugely even in one day from the same location and supply,” Humphries said.

Data from the Drug Enforcement Administration show that street heroin agents purchased in Denver ranged between 15 and 25 percent purity. Fluctuations in purity put users at risk of overdose.

Overdoses in public have put drug users in Denver under an uncomfortable spotlight. But the issue has also created a headache for a city government struggling to find solutions. Denver, Humphries said, is known for its "open air drug market." A bike path along the Cherry Creek Trail downtown was a notorious hotspot for drug activity. But police sought further action after they made over 120 felony arrests in the area and collected over 3,500 used syringes throughout 2016. The city’s parks department and police moved to ban suspected users and dealers from city parks — a move challenged as unconstitutional by the ACLU.

But increased enforcement will not address some of the root problems forcing drug users into public spaces. Humphries told me about 70 percent of HRAC members are homeless or in transitional housing, staying in motels or sleeping on friends’ couches when they can. The Metro Denver Homeless Initiative found in 2017 over 5,100 people suffering homelessness in the metropolitan Denver area, based on a conservative snapshot study.

Lack of secure housing exacerbates the risks facing drug users. “When people live outside they are forced to inject in public or in bathrooms,” Humphries said. “At that point you’re rushed, you’re nervous . . . You have a much higher likelihood of missing your shot, or not being able to wash the point of injection. You risk contracting a bacterial infection or causing an abscess.”

Humphries explained how many of Denver’s drug users are not merely using one drug, but multiple drugs. Many homeless people use the stimulant methamphetamine to stay up all night walking around in the winter. After being awake for over 24 hours, heroin is the easiest way for them to come down and sleep again.

Denver’s city policies do not make life any easier for people who are homeless. In 2012 the city implemented an urban camping ban allowing law enforcement to eject people sleeping in parks or public spaces. Denver police made 31 arrests for unauthorized camping between 2012 and 2017.

But Denver police counter that arrests, written warnings and citations are a small proportion of the total 14,700 contacts they made in this period. The majority of contacts with people sleeping in public resulted in verbal "move-on" orders. Local authorities maintain that protocol is first to offer people help obtaining shelter or services before taking further action. Nonetheless, the policy has prompted a class-action lawsuit in federal court, which is currently pending.

People injecting drugs in Denver remain without a safe place to use, but HRAC plans to keep up the fight. They have lobbied for the SIF/SUS for over 18 months. “In the first two weeks of January 2017,” Humphries said, “we lost seven participants and that was something we decided we could never have happen again. That’s why we started pushing really hard at that point for supervised use, because our people are dying. It’s not even because of this fentanyl crisis that everyone’s focusing on, it’s just plain old black tar heroin.”

While Humphries expressed doubts about the future of SIF/SUS in Denver, she noted the overwhelming support the initiative has received so far. City council members, local medical societies and a coalition of over 30 businesses have shown support. In December, city council president Albus Brooks traveled to Vancouver to visit InSite and learn more about SIF.

Humphries described the outpouring of support during the State Committee hearing on February 14: “In over a three-hour hearing, where everyone was granted three minutes to speak, only one person spoke in opposition. Everyone else spoke up for the SIF/SUS. So right now there is no organized opposition — only party politics.”

Humphries rejected a common criticism that her agency or SIF/SUS enable illegal drug use. “We’re really just providing people with the services they need,” she said. When it comes to enabling, we say we are definitely enablers; we enable people to stay alive, to not contract HIV or hepatitis C. That’s what we’re here to do."