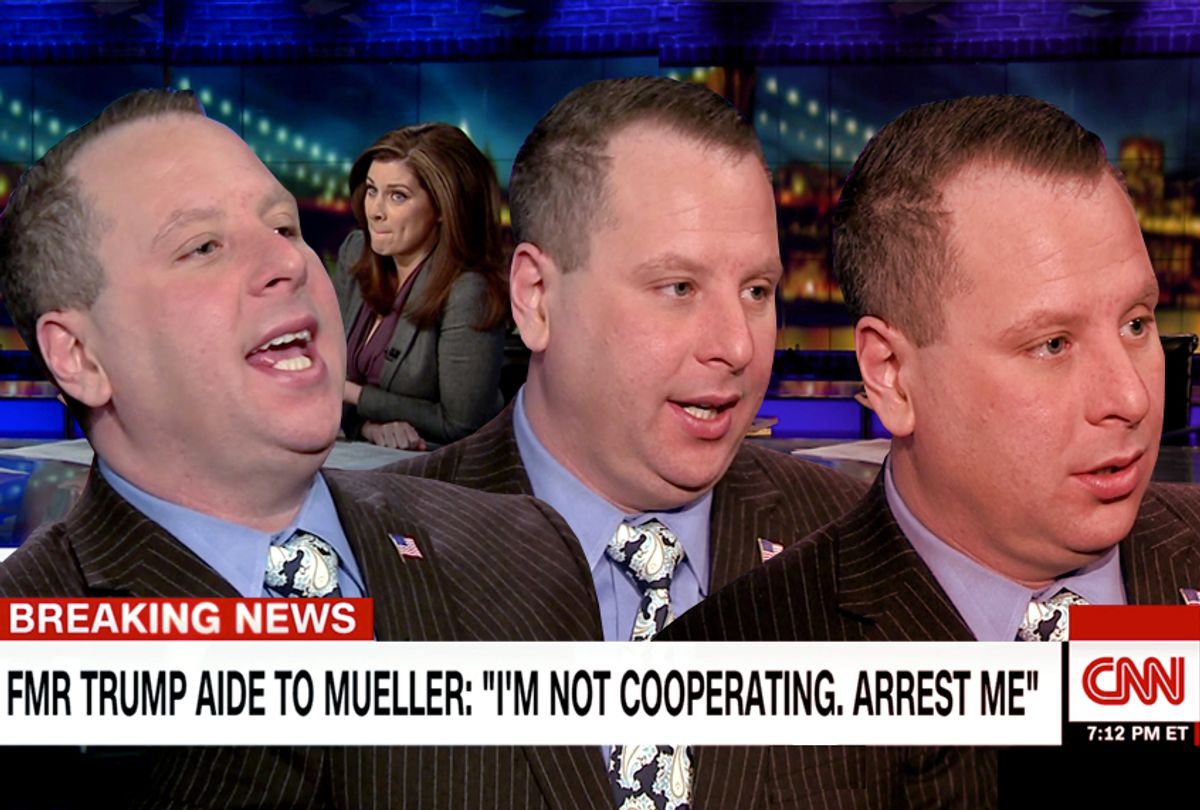 Well, he hired them, and he’s paying for it every single day. One of the best people Trump hired was the wife-beater Rob Porter, stripped of his security clearance and fired from the White House. Another was Michael Flynn, who pled guilty to perjury and faces jail time. Another was George Papadopoulos, also guilty of perjury, also being fitted for an orange jumpsuit. Then there were Paul Manafort and Rick Gates, the laundry twins, who pirated tens of millions out of the Ukraine, both charged on multiple counts of bank fraud, money laundering, and tax evasion. Gates pled guilty and his whispering in Mueller’s ear. Manafort is hanging tough, so far. All of them were among Trump’s best and most serious people. More than 40 of them have departed the Trump administration, few leaving with anything more than tattered reputations and burgeoning legal bills, most looking forward to interviews with Mueller’s investigators and appearances before his grand jury.

The most recent of Trump’s best people to stick his head out of the foxhole was Sam Nunberg, his former campaign aide who went on no less than five cable television shows on Monday to complain about the grand jury subpoena he had recently been served with by Special Counsel Robert Mueller. Pundits quickly labeled Nunberg’s TV appearances “bizarre,” “unhinged,” “surreal” and “bonkers.” Nunberg may have appeared to be coming apart at the seams, but if you listened closely, he was on a mission to protect his friend and mentor Roger Stone, whom Nunberg described as “family, like a father to me.”

Nunberg had already been interviewed by Mueller’s agents in February. He described the interviews to Ari Melber in a recent appearance on “The Beat” as “very professional and productive. They’re not wasting taxpayers’ money.”

But he changed his tune on Monday. The subpoena issued to Nunberg on February 27 wasn’t for another chatty sit-down with Mueller’s investigators. He was ordered to appear before a grand jury on Friday and produce all of his emails, text messages and other correspondence going back to November 1, 2015 with a long list of Trump aides and factotums including his pal Roger Stone, Hope Hicks, Paul Manafort, Carter Page, and get this! Donald J. Trump himself. Former federal prosecutors interviewed on Monday speculated that the subpoena for so many records was intended to camouflage who their actual target is. Prosecutors will frequently ask for way more information than they are actually seeking in order to confuse a witness about their intentions.

They didn’t fool Nunberg. “I think they have something on Trump,” Nunberg told Ari Melber and anyone else who would listen on Monday. He told Katy Tur he thought Trump “may have done something illegal” during the campaign. “But I don’t know.”

But in every interview, Nunberg returned again and again to defending Roger Stone. Speaking from a taxicab on his way to yet another cable news interview, Nunberg told Yahoo! News “I’m doing this to defend Roger I’m not going to let them just hurt Roger for no reason.” Nunberg met with Mueller’s team in an interview for more than five hours in February. “They asked about if I knew about Roger’s business, what Roger does, which I didn’t like. I don’t think it’s fair,” Nunberg said. In yet another interview, Nunberg accused Mueller of setting up a “perjury trap” for his friend Roger Stone. He told MSNBC, “I’m not going to go in there for them to set up a case against Roger. Roger did not do anything. Roger and I were treated like crap by Donald Trump, okay?”

Nunberg and Stone go back at least to 2014 when Trump hired them to consult when he was thinking about sticking his toe into the 2016 presidential waters. Nunberg set up an interview with Trump for Buzzfeed which backfired spectacularly on the nascent candidate, and Trump fired him. But he was rehired in February of 2015 as Trump’s “communications director” and once again linked up with Stone working for Trump.

When Trump announced his candidacy in June of 2015, Nunberg took credit along with Stone for convincing Trump to make building a wall along the border with Mexico a centerpiece of his campaign. By August, however, Trump had Corey Lewandowski on board as campaign manager. Lewandowski apparently didn’t get along with either Stone or Nunberg, and someone leaked racist Facebook posts from Nunberg’s account to the press, and he was fired. Nunberg returned to his hatred of Lewandowski over and over again during his roundelay of interviews on Monday. “I didn’t steal from the campaign,” he told Erin Burnett on CNN, apparently referring to Lewandowski. “I didn’t have an illicit affair with a married man,” he said, referring to Hope Hicks, who took over his job as head of communications for the campaign and was known to have had an affair with the married Lewandowski.

But it was to Roger Stone that Nunberg returned to again and again on Monday. He had apparently concluded from the tenor of his first interview with Mueller’s agents that they were interested in what Stone’s connections were with the Russian hacker Guccifer 2.0, as well as his contacts with Julian Assange of WikiLeaks. Nunberg was focused like a laser on one thing: protecting Roger Stone.

MSNBC’s Katy Tur spoke to Nunberg on the phone on Sunday night, and he emailed her a copy of his subpoena. At that time, he was unperturbed at the prospect of going before the grand jury. But something happened between Sunday night and Nunberg’s phone call into Katy Tur’s show on Monday afternoon that made him not only wary of Mueller’s investigators, but defiant. He swore he wouldn’t honor the subpoena, and for the next eight hours or so proclaimed to anyone who would listen that Mueller could put him in jail, but he wasn’t going to testify before the grand jury.

The only difference between Nunberg’s February interview with Mueller’s investigators and his subpoena this week was the formal demand for emails and other documents. Nunberg told Ari Melber he and Roger Stone emailed each other “fifteen times a day.” Going all the way back to November 1, 2015, that’s a lot of emails. When he spoke to Katy Tur at 2 p.m. on Monday, Nunberg told her that he had just been going back over his emails. Then he launched into his defense of Roger Stone that would last for eight hours over more than seven interviews. By 10 p.m. on Monday, he was somewhere in Manhattan in the company of his father and others and had changed his mind. He would comply with the subpoena after all.

By Tuesday evening, Roger Stone was live on “MTP Daily” with Chuck Todd doing the rhetorical boogaloo trying to make light of both Nunberg’s meltdown and Mueller’s investigation. He sounded like Hannity’s hand-puppet, denying collusion, spinning the usual conspiracy theories about Hillary and the spurious uranium deal. But where he really came alive was when Todd focused on his contacts with Guccifer 2.0 and Julian Assange and WikiLeaks.

Suddenly Stone turned crafty, carefully spelling out that Assange wasn’t a “Russian asset” but rather a legitimate “journalist.” Being in contact with Assange during the campaign wasn’t in any way “treason,” Stone said. You could have pushed Chuck Todd off his studio stool with a feather. It was Roger Stone who brought up “treason,” not Todd.  When the interview was over, all Todd talked about with his guests was how careful Stone had been to deny Assange’s connections to the Russians. Todd reminded him that no less a Trump defender than Central Intelligence Agency Director Mike Pompeo had called WikiLeaks and Assange Russian assets, but Stone held his ground. “He’s really moving the goal posts,” said Chuck Todd. The new Roger Stone position is that colluding with Assange wasn’t colluding with the Russians.

Here’s the problem with guys like Roger Stone and Sam Nunberg. It’s not that they’re obnoxious loud-mouths and egotistical maniacs. They are. So are Paul Manafort and Carter Page and Michael Flynn and a whole bunch of Trump’s other “best people.” Remember Flynn at the Republican National Convention leading the crowd in the “lock her up” chant? Remember Carter Page grinning and dissembling on Chris Hayes’ MSNBC show about what he had done in Moscow and who he had talked to? Remember Manafort telling George Stephanopoulos on ABC that nobody on the Trump campaign had ever met with Russians? The whole lot of them are inveterate liars who couldn’t keep their mouths shut or their stories straight.

Trump’s campaign operated like he was running for president of his 11th Grade class, instead of the highest office in the land.  Emails and texts flew around like confetti in a hurricane. The end result was that instead of knowing too little, Trump’s “best people” know too much. In the case of Sam Nunberg and his pal Roger Stone, they know plenty about what was done with the Democratic emails the Russians hacked and turned over to Julian Assange and WikiLeaks. Stone couldn’t keep his mouth shut about them during the campaign. He was always tweeting ahead of the next release of emails from the DNC,  then predicting that next, it would be “Podesta’s time in the barrel.” Now he’s trying to split hairs and wiggle out of what he did during the campaign because he realizes that Mueller has him in the cross-hairs.

Mueller turned a corner last week. He didn’t just issue a subpoena to Sam Nunberg for his emails and other correspondence with Roger Stone and the rest of them. Prosecutors don’t go after communications between people from one direction only. Mueller has obviously subpoenaed others on that list, although Roger Stone told Chuck Todd he hadn’t been served yet. Which should give Stone something new to worry about.

Prosecutors don’t usually subpoena the targets of their investigations. Last week, Mueller went from politely asking for cooperation from witnesses to ordering them to produce documents and appear before grand juries. Last week, he dragged a big-time financial adviser to the United Arab Emirates into his grand jury looking for goodies on Jared Kushner and Blackwater founder (and Betsy DeVos brother) Erik Prince and their connections to a Russian fund manager for Vladimir Putin. He has made clear that he’s running a criminal investigation and he is backing up his demands with the force of the law.

He’s sweating Sam Nunberg to pressure Roger Stone, and then he’ll sweat Roger Stone for everything he knows about Donald Trump and his connections to the Russian hacking of the Democrats’ emails in 2016. Stone and Trump both have admitted that even after he was fired from the campaign in 2015, they talked on the phone throughout the campaign. Stone was Trump’s cut-out to Julian Assange. Assange was the cut-out to the Russian hackers.

Sweet Jesus, with out of control lunatics  like Sam Nunberg, Roger Stone, and Carter Page, and alleged money-launderers like Paul Manafort working on his campaign, Trump needed help from the fucking Russians.