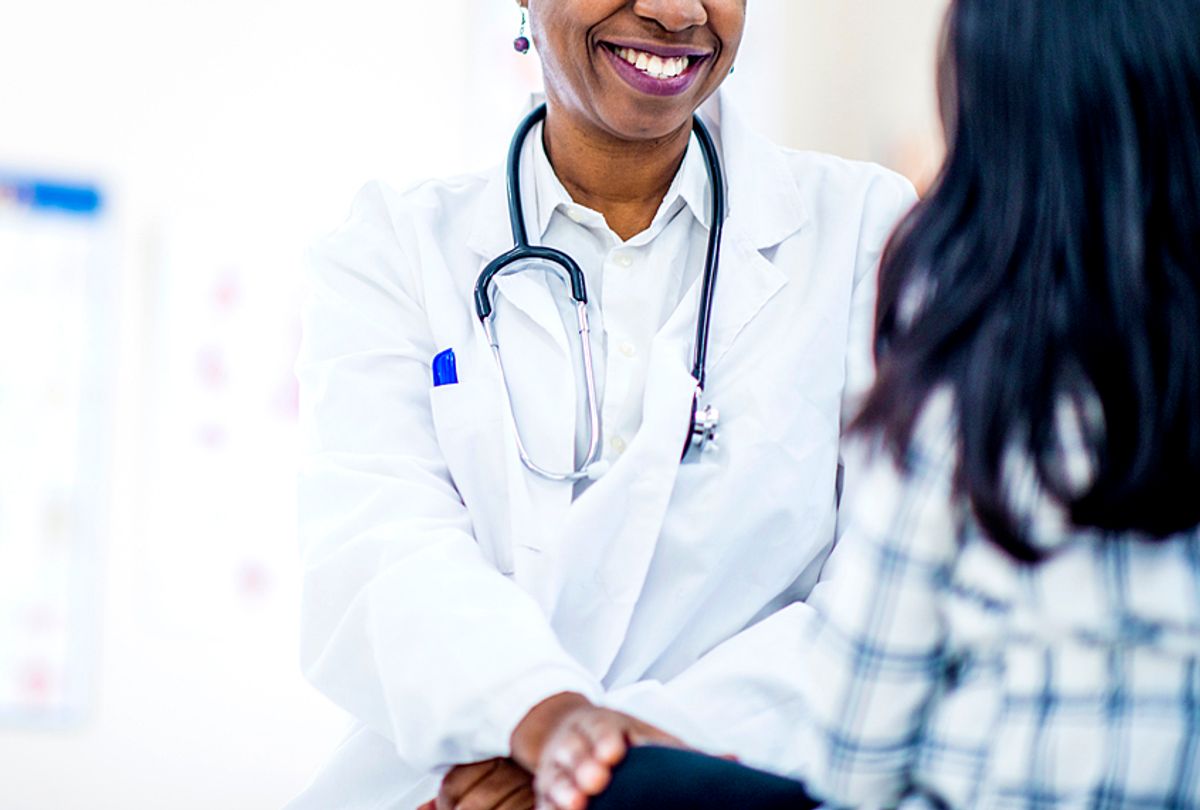 Once again, Black History Month has ended and led us directly into Women’s History Month. Despite these back-to-back opportunities, we are still not talking enough about the ways our society is failing these populations, especially women of color.

I confess that I’ve been a part of the problem—keeping my head down and mouth shut as I made my way through training. But this year is different for me—it’s the first year I am in practice as a “full-fledged” physician, the first year where a president is injecting hate and fear into my heart and the hearts of my patients and community. It is also my first year as a pregnant Black woman in a country filled with health disparities, where pregnancy-related deaths are three times more likely in Black women than in White women.

My practice is one place where I strive to address these health disparities — this racism — by incorporating social justice principles and awareness of unintentional biases. This does not come easily; I have been trained — and even raised — to ignore or excuse these differences. However, as I grow as a provider and as a person, my deep concern with our medical education, and its lack of teaching around racism and reproductive justice, grows. In medicine, we talk about the distrust of people of color toward the medical community, but we do not talk about why.  We struggle to explore why these differences in health equity exist — thinking ‘there must be a scientific explanation,’ not accepting that all of this dark history, as reproductive justice activist Loretta Ross put it, “is in our bones.”

In elementary school for Black History Month, my predominately white classmates and I completed reports about Harriet Tubman and Dr. Martin Luther King Jr., but the teaching of Black history stopped there. In college, the few Black people on campus would make an effort to bring attention to our past and present, but it fell on deaf ears.

In medical school, not only did we not pay special attention to Black History Month, we didn’t pay attention to Black history at all.  There was no mention of reproductive justice, which — as defined by reproductive justice collective SisterSong — is a grassroots movement that places the focus on the reproductive health and rights of “people of color, low-income and uninsured women, Indigenous women, immigrant women, women with disabilities and people whose sexual expression [is] not respected.”

We did not learn that Dr. James Marion Sims, the “father of modern gynecology,” perfected his procedures on un-anaesthetized black slaves. We do not learn that in Puerto Rico in the 1950s the US performed its first large-scale human birth control pill trial on women without adequate consent. We were not taught that in 1990 when Norplant (an implantable birth control) was initially released, it was marketed exclusively to low-income women and teens as a way to “reduce poverty.” Or that within two days of the FDA approval, an editorial in the Philadelphia Inquirer suggested that Norplant should be used as a "tool in the fight against black poverty.” Within a few years, legislators throughout the U.S. had proposed multiple bills to make Norplant a requirement for welfare recipients and parolees.

Instead, in medical school we were taught to emphasize long active reversible contraceptives (LARCs) such as IUDs and implants for women deemed to be “at risk” for pregnancy — women of color, young women, and poor women.

Today we further control the reproductive rights of underserved women with the Hyde Amendment, which forbids federal money to go toward abortion services, though Medicaid will cover cost of sterilization with few legal barriers.

Thankfully, the movement to incorporate social justice and reproductive justice frameworks into medicine has begun and, for the first-time, conversations with my patients have seamlessly transformed into conversations about race and immigration. The day after the election — when the fear and confusion was palpable on the streets — I sat in a small exam room with a patient. She said to me “You’re beautiful.” I smiled back at her smooth brown face and she continued, “Girl, you know we have to lift each other up.” And I said, “Thank you, we do. Now more than ever.”

In the East Bay clinic where I now work, a middle-aged Black man smiled as he told me about his past distrust of doctors and how he talked to his white friends in dialysis about how contrasting their medical care has been. Last week, a young Black woman came in crying. She was pregnant, having been denied a tubal ligation by providers in the past because she was, in their eyes, “too young” to make that decision. She had an appointment at Planned Parenthood for an abortion. I held back tears as she thanked me for being so understanding and supportive. I left the visit furious that she had been treated any other way.

There is so much more to tell, so much more to say. It is time to have these conversations and talk openly in the medical community about race and racism. As providers, we have the privilege and the power to work with our communities to effect change. This is not Black history, this is history, and we can no longer ignore it — our relationships with our patients depend on this movement forward — no matter your skin color, your history, or your geographic location.

In a few short months, my life will be forever changed as I welcome my first child. But in all of the excitement and anticipation remains the dread of one day needing to teach them what their schooling won’t. I will teach them Black history and women’s history: the history of injustice, imbalance of power, of the slow steady march to regaining what was taken away through the work of social and reproductive justice. And I will teach them of the courage, strength, beauty, love and vibrancy of women of color. Our history must be redefined for not just my future child, but for all of her future peers.

Dr. Aisha Wagner is a family medicine physician based in the Bay Area and a fellow with Physicians for Reproductive Health.